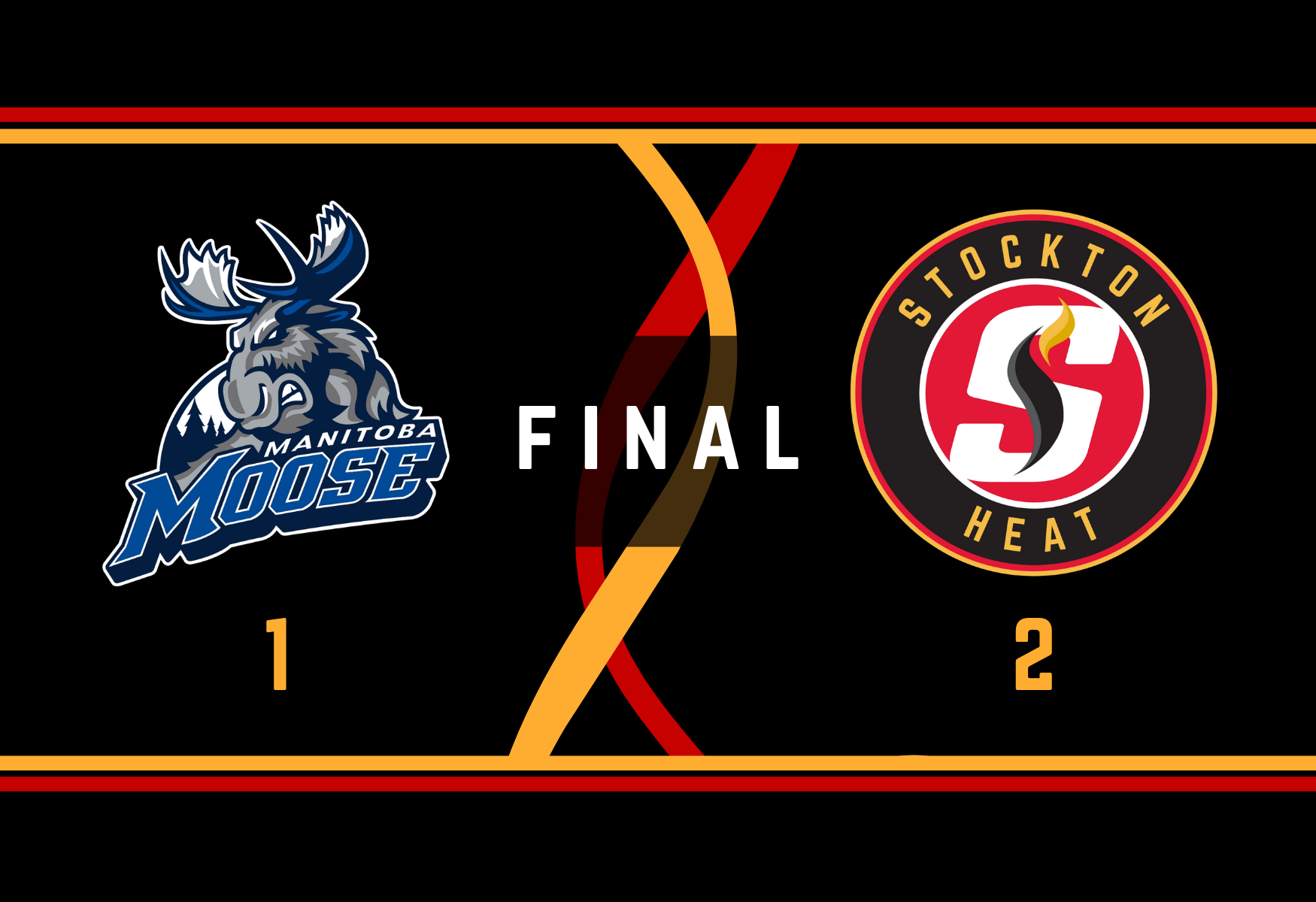 By Mike Gould
1 year ago
The Stockton Heat won again on Thursday, defeating the Manitoba Moose by a 2-1 score to extend their winning streak to eight games.
Luke Philp and Martin Pospisil scored for Stockton, which improves to 8-2-0 on the season. The Moose entered Thursday’s contest on a (now snapped) four-game points streak but have fallen to 6-7-2 with the regulation loss.
Garret Sparks made 24 saves for the Heat, allowing just one goal—to Cole Maier, in the second period—on his way to earning a fourth consecutive win. The Heat solved Moose goaltender Mikhail Berdin twice on 20 shots.
Thursday’s game was the first of the post-Connor Zary era for the Heat. The 19-year-old forward was assigned to the Kamloops Blazers earlier in the day to begin quarantining in advance of the 2020-21 Western Hockey League season.
Giorgio Estephan was promoted into the top-six in Zary’s absence and immediately made an impact, setting up Philp’s goal 13:04 into the first period.
Rory Kerins entered the lineup for the Heat for his first professional game; the 18-year-old winger was drafted by the Flames in the sixth round of the 2020 Draft and has been skating with the Heat on a try-out basis while waiting for his OHL team, the Soo Greyhounds, to resume play.
The Heat have now scored the first goal in seven consecutive contests and boast the AHL’s second-best points percentage (.800, second only to the .909 Henderson Silver Knights).

Stockton out-shot the Moose by an 18-5 margin in the first period on Wednesday. Thursday’s opening frame was far less eventful, with the shots ultimately favouring Manitoba 8-6.
The Moose had two power play opportunities in the first period; the Heat had none. The flow of play at even strength slightly favoured Stockton in the opening 20 minutes, and Glenn Gawdin had a good chance to give his team a one-goal lead just before Connor Mackey took the game’s first penalty.
Shortly after successfully killing the Mackey tripping minor, Stockton’s newly-minted second line opened the scoring. Estephan took a pass from Alexander Yelesin in the neutral zone and barreled over Manitoba’s blue line with the puck, driving towards the left circle and leaving the puck for Luke Philp.
Philp moved the puck to his right and slid the puck past Berdin to give the Heat a 1-0 lead at the 13:04 mark of the first period. Estephan and Yelesin received the assists on Philp’s third goal of the season.
Heat defenseman Zac Leslie took a high-sticking minor with 5:45 to play in the first period; after this infraction was called, the Moose out-shot Stockton by a 4-0 count to finish the opening frame.
Manitoba’s best chance in that span came off the stick of Ville Heinola, the Winnipeg Jets’ first round selection in the 2019 Draft. The defenseman took advantage of open space to skate right in on Sparks and put forth a backhand shot that caught nothing but glove.
The Heat did a good job of controlling the play in the second period and started with energy from the opening face-off. Philp helped set the tone for the middle frame, making numerous good plays with the puck on his first shift and eventually getting a breakaway opportunity against Berdin.
Martin Pospisil took a two-minute interference penalty 3:34 into the second period; 10 seconds after Pospisil exited the box, Mackey was dinged for a hold. Despite being down a man for four minutes out of 4:10, the Heat managed to entirely stifle the Moose and prevent them from getting a single shot on Sparks.
Pospisil continued to get good looks as the game progressed. For example, in the clip below, he got a nice, up-close look at the back of the net.
The visitors continued to push for an insurance goal. As the game approached its mid-way mark, the Heat occupied Manitoba’s defensive zone for an extended shift full of scoring chances. Most notably, Estephan had an opportunity to score on an empty cage after the puck took an unusual bounce off a stanchion. Berdin had wandered behind his net in an effort to corral the puck but, nonetheless, Estephan was foiled by a good defensive stick.
Stockton’s relentless pressure led to Moose defenseman Jimmy Oligny taking a cross-checking penalty.
The Heat wasted no time in converting on their first power play opportunity. Undoubtedly drawing from his previous experience with the back of the net, Pospisil tickled the twine on the man-advantage by deflecting an Adam Ruzicka attempt through Berdin to give Stockton a 2-0 lead.
The Moose managed to muster a response in the final minutes of the second period. After a giveaway by Heat defenseman Colton Poolman, Moose forward Nick Jones located Cole Maier with a pass that led to a quick one-timed goal.
Estephan found himself right in the middle of the action once again to begin the third period. After receiving a crafty pass by Philp, Estephan came within inches of solving Berdin with a wrist shot from the left side just 15 seconds into the final 20.
From there, the Heat basically had to hold on. The Moose out-shot Stockton by a 10-2 margin in the final frame before Marko Dano took a cross-checking penalty with just 3:14 to play.
Despite his team’s opportunity on the man-advantage, Sparks had to stay sharp. The usually reliable Matthew Phillips turned the puck over at his offensive blue line, setting the stage for a shorthanded two-on-one heading the other way; lucky for the uber-skilled winger, Sparks was able to make a terrific lateral save to deny David Gustafsson of a game-tying goal.
Manitoba ended up taking 12 of the 15 total shots in the final 20 minutes but neither team managed to score. The Moose failed to convert on any of their five power play opportunities; the Heat went one-for-three with the extra man.

They scored first and managed to get the all-important insurance goal. Manitoba had little answer for Stockton’s attack in the second period and generated just two total shots (and zero goals) on its five power play opportunities.
The Heat played a pretty solid defensive game and Sparks was able to cover up for any deficiencies. Despite losing Zary, the Heat managed to make up for his departure by finding contributions from some comparably unheralded players.

Giorgio Estephan deserves a lot of credit for being able to step into the lineup in Zary’s absence and contribute right away. He looked like a natural fit alongside Glenn Gawdin and Luke Philp and generated his fair share of offense.
The 24-year-old Estephan has spent the majority of his professional career in the ECHL and has produced incredible offense at that level, scoring 44 goals and 127 points in 135 games. With only 19 AHL games to his credit thus far, Estephan remains something of an unknown quantity in the league but already has two points (both assists) in two games this year with the Heat.

The Heat and Moose will finish up their four-game set with a 1 p.m. MT matinee on Saturday. Nursing an eight-game winning streak, Stockton will be aiming to sweep this series and build an even bigger cushion atop the AHL’s Canadian Division. You can catch the game on AHL TV; I’ll be posting updates on Twitter at @miketgould.
Uncategorized
Recent articles from Mike Gould