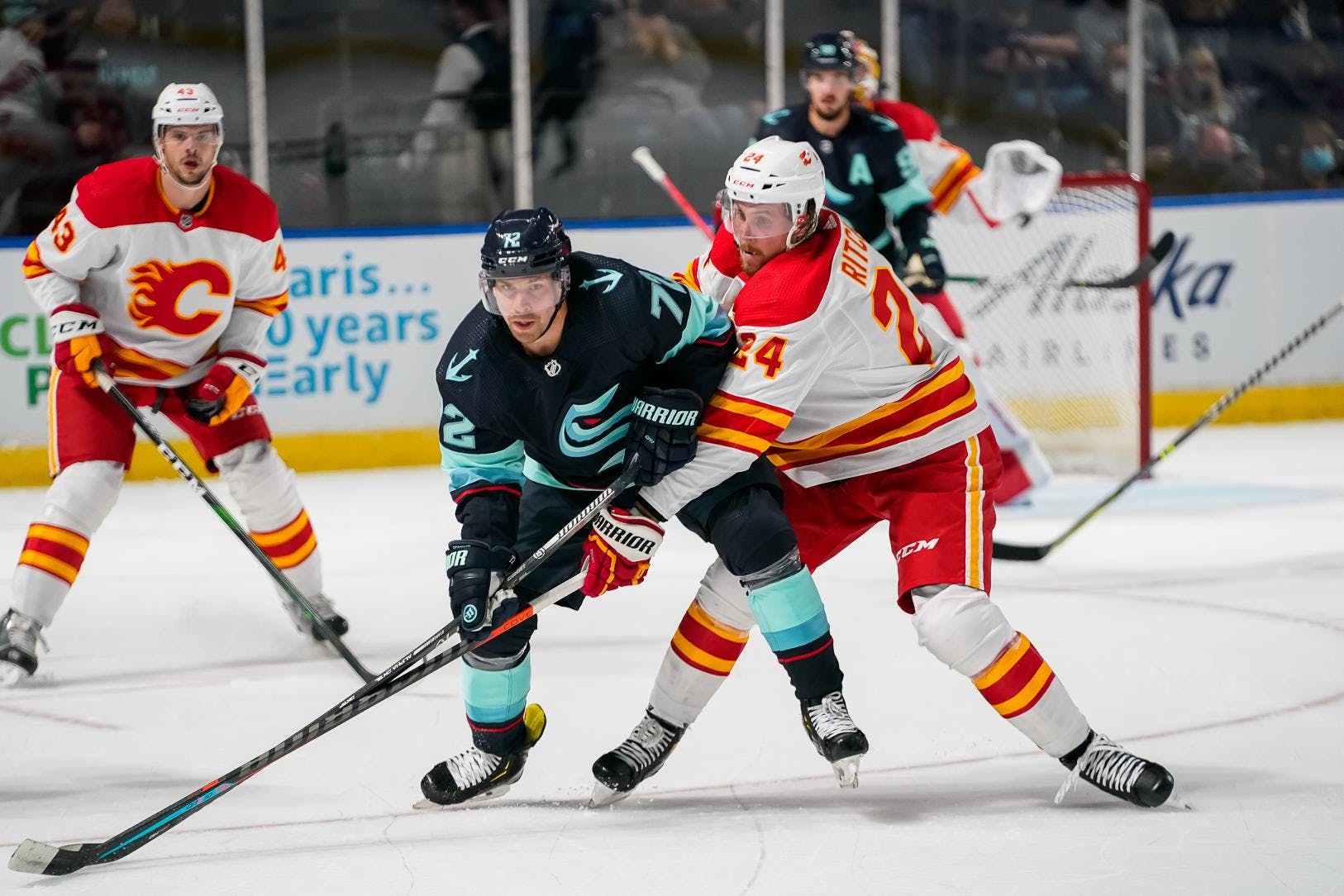 By Mike Gould
1 year ago
Unless you were physically in the building for Saturday night’s clash between the Calgary Flames and the Seattle Kraken, you likely weren’t able to watch any of the action.
The Flames initially announced they would host a stream out of the Accesso ShoWare Center in Kent, WA. Later in the day, those plans changed.
Anyway, here’s a surface-level look at what (allegedly) happened in the Flames’ 4-1 win over the Kraken.

After killing two penalties — two minors: one, to Glenn Gawdin for tripping; the other, to Ryan Francis for high-sticking — to start the first period, the Flames received their first man-advantage of Saturday’s game with just 2:07 remaining in the opening frame.
They (barely) made the most of it. Byron Froese opened the scoring in the game with just 10 seconds remaining in the Will Borgen roughing penalty and 17 seconds left in the first period. While standing right in front of Kraken goaltender Chris Driedger, the Stockton Heat captain deflected a Juuso Välimäki shot into the goal for his first of the pre-season. Michael Stone picked up the secondary helper.
The Flames doubled their lead early in the second period, although accounts differ on who actually scored. After taking a feed from Martin Pospisil, Stone unloaded a bullet from the point that found its way past Driedger.
NHL.com currently credits the goal to Stone. The Flames assert that Froese, who was again battling in front of the net, got a piece of the shot before it struck twine. Either way, Calgary’s second goal came at the 3:07 mark of the middle frame.
Calgary took the first three penalties of the second period. Connor Mackey took the second penalty of the frame at the 8:11 mark; on the Flames’ ensuing 5-on-4 disadvantage, Glenn Gawdin found a sliver of open space in the neutral zone and went off to the races.
The young right-handed centre sped into Seattle’s zone on a partial break; as Kraken defenceman Vince Dunn reached over to try and swat the puck away, Gawdin fired it over Driedger’s right shoulder and into the top corner of the net.
With Mackey still in the box, Seattle got one back. Unfortunately, we don’t have a video of this goal to share with you.
We can tell you that Dunn received credit for the marker, which came just 68 seconds after he unsuccessfully defended Gawdin’s shorthanded attempt. Joonas Donskoi and Alexander Wennberg picked up assists on the tally.
The Flames and Kraken opted to open the third period with a bout of fisticuffs. Dunn was, once again, in the middle of the action, trading blows with Calgary forward Justin Kirkland. Both players received five minutes for fighting.
After watching Dunn’s goal from the sin bin, Mackey made up for his infraction in the third period. He restored the Flames’ three-goal lead midway through the frame, beating Driedger right off a faceoff.
That was all the Flames would need. They took this one by a final score of 4-1 despite being out-shot 24-13 by the Kraken.

Did you see the part where they held Seattle to 24 shots? No, really, I’m genuinely asking — we didn’t see any of the shots. Either way, that’s a pretty solid defensive result no matter how you slice it.
The Flames only mustered 13 shots of their own. Even so, they scored early, they scored often, and they scored in all situations. Sometimes, it pays to be opportunistic.

We’ll go with Dan Vladar, who stopped 23 of the 24 Kraken shots he faced. We have no idea whether any of the shots he faced were particularly dangerous but we’ll go out on a limb and say he probably broke a decent sweat on a few of them.
When it comes to the Red Warrior distinction, it’s hard to beat a guy with a .958 save percentage.

Seattle easily could’ve made it a one-goal game when they went on the man-advantage at the 8:11 mark of the second period. Instead, Glenn Gawdin scored on a shot that Kraken goaltender Chris Driedger likely wants back.
Even though the Kraken ultimately did score on that power play, they still came out of that opportunity down by two goals — the same disadvantage from which they started.

Calgary went with these lines in the game:
While Vladar picked up our Red Warrior award, he didn’t quite make it to the top when it came time for the in-arena “Three Stars” selection.

The Flames (2-2-1 in the pre-season) will head to Edmonton on Oct. 4 for another exhibition tilt against the Oilers. Sportsnet 960 The Fan will carry that game on the radio; the Flames will probably post a video feed on their website. Here’s hoping, at least.
Uncategorized
Recent articles from Mike Gould