By Mike W
1 year ago
Way back in 2011, the Calgary Flames drafted a small winger from New Jersey by the name of Johnny Gaudreau. Several years later, he’s emerged as one of the best offensive players in club history. But is the clock ticking on his time with the Flames?
What are reasonable expectations to have for Gaudreau as he approaches the last couple seasons remaining on his current contract?

How he got here

You know the Johnny Hockey legend. Born in New Jersey the diminutive Gaudreau began his rise to stardom in the United States Hockey League. In 2010-11 he earned rookie of the year honors and led his Fighting Saints to a championship. Jay Feaster and the Flames selected the Dubuque stand out in the fourth round, 104th overall in the 2011 NHL Draft: he currently sits third in career points among his draft class behind only Nikita Kucherov and Gabriel Landeskog.
After lighting it up with Boston College many feared the he would bolt. It was only after Craig Conroy and the Flames brass jetted off to the Hobey Baker ceremonies and returned with the signed proof the BC star would dawn the Flaming C did we loosen our collectively clenched muscles.
Sporting Derek Morris’ legendary 53 a fresh-faced Gaudreau appeared in the flesh in the spring of 2014 where he slid home his first NHL goal in the final date of the 2013-14 season. Since then there have been some ups. A strong freshman showing where he not only tied Mark Stone for the rookie point lead but also helped propel the upstart Flames to an appearance in Western Conference semi-finals had Flames fans jazzed. Some solid years in 2015-16 and 2017-18 were punctuated by a dominant 2018-19 campaign. Gaudreau’s 99 points and supreme performance led the Flames to a historical, unforgettable first place finish in the West. With the good comes the bad, however, and Gaudreau has certainly seen some lean times here in Calgary.
The trifecta of getting smoked by the Ducks in the 2017 playoffs, missing the playoffs altogether the next year, and getting demolished by the Colorado Avalanche as the top seed in the West is the most noteworthy and upsetting series of unfortunate events.
Following up the 2019 playoff stinker with the worst regular-season performance of his career and another less than stellar playoff showing has us asking, now more than ever, what can we expect from Johnny Gaudreau?

Gaudreau had a tough year. Also, water is wet. The 2019-20 campaign was an aberration in his NHL journey thus far. After a career year the stumble for the now 27-year-old was a bit of a surprise. Sure, some regression was expected from the 99 point explosion where everything he touched turned to gold, but his incredibly poor play in the first half of the 2019-20 season was disappointing to say the least. 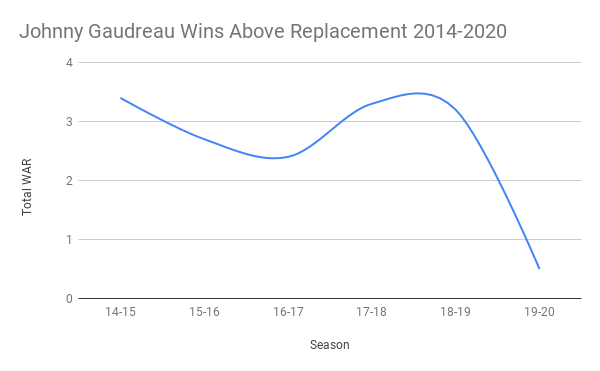 (WAR Data from Evolving Hockey)
His production, in the end, wasn’t that poor. It was more that on far too many occasions Gaudreau just wasn’t the electric threat we’ve come to know and love. This was a turn that most Flames fans and pundits reacted to very rationally and calmly (insert sarcasm). Despite the collective freakout over the dip in his game, I think it’s fair to say we can expect a bounce back from number 13 in 2021.
And boy, do the Flames need it. A large part of the team’s projected success in the North division relies on it. It’s often said as Johnny goes the Flames go. That was pretty accurate in the 2019-20 season. While there are many factors to consider when examining the Flames’ improved performance in the second half under Geoff Ward, you can connect the timeline of Gaudreau finding his form offensively and the club as a whole generating more quality offense and winning more hockey games.
His second-half offensive revival should also quell fears of a massive fall off. Using Top-Down Hockey’s regularized adjusted plus-minus (RAPM) model, we can see that Gaudreau’s scoring chance generation improved dramatically in the second half. 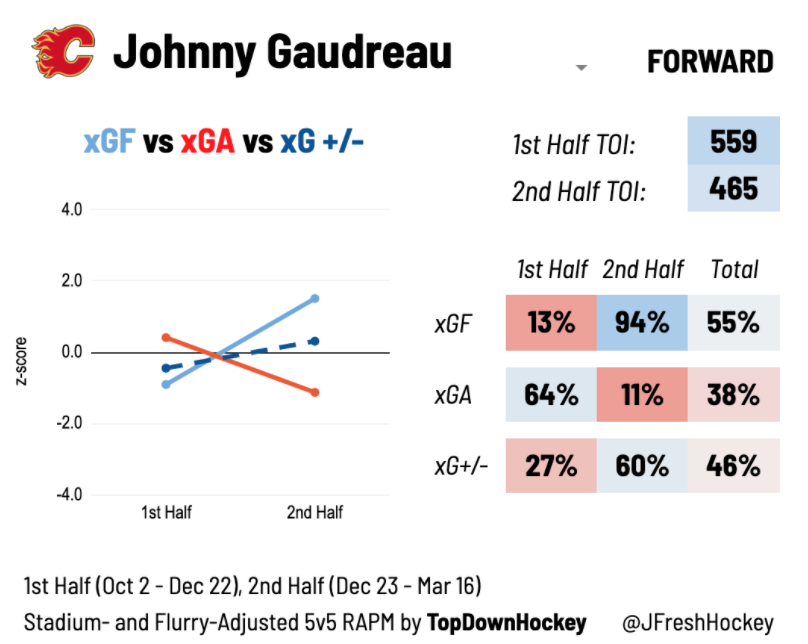 (Source: JFresh Hockey)
It’s also important to remember Gaudreau’s actual skill set when considering what to expect from him: he’s a playmaker and over the 2019-20 campaign he continued to be one of the league’s best set-up men. 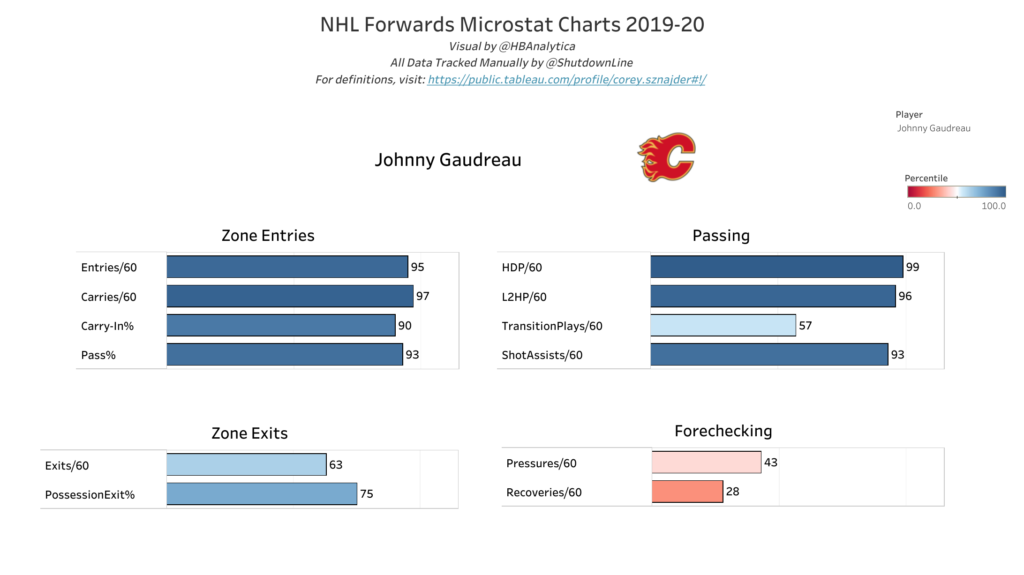 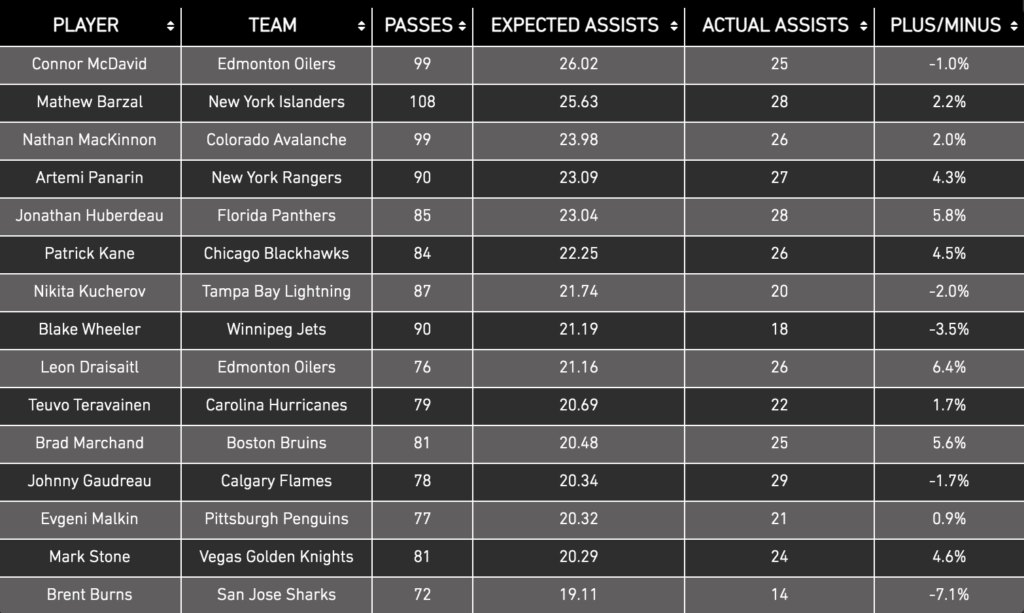 (Courtesy CSAHockey.com)
While he wasn’t creating as many goals from his own stick Gaudreau was still effective in distributing the puck.
Johnny and his line-mates weren’t finishing at a great clip, however. The titular trio’s 5v5 on-ice shooting percentage slipped from 11.63% in 2019-20 to 7.19%.
Furthermore, Lindholm and Monahan were not doing much in the play-making department. Lots of heavy lifting was done by 13 in the offensive zone and, while 28 was able to find the back of the net consistently, 23 seemed to do a whole lot of standing around this year. 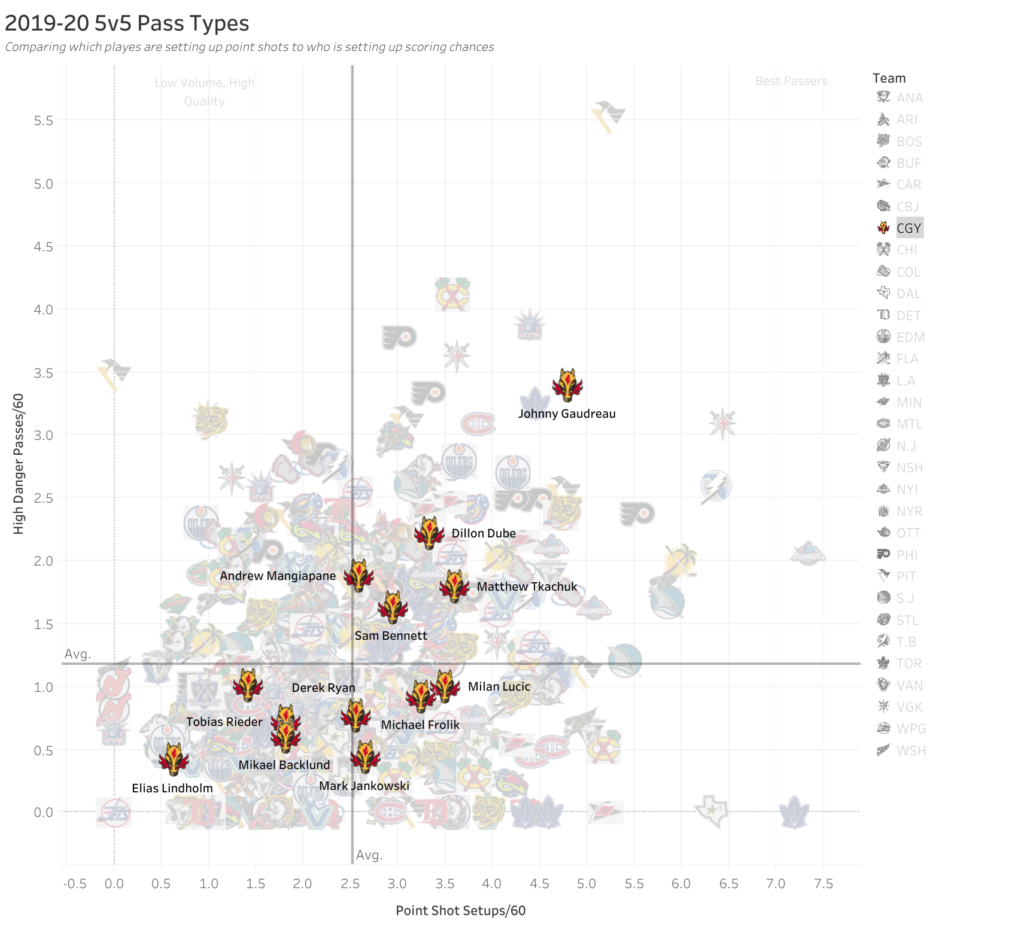 (Courtesy Corey Sznajder)
The first half struggles were compounded by poor shooting luck and the inability of his go-to trigger man to do much of anything.
He will almost certainly be better but the question is how much better? He’s still the engine that drives this club’s offense and if he isn’t right there will be some serious sputtering.
There seem to be two inter-related external factors to consider when ascertaining what exactly will see from Gaudreau.
Firstly, how will the systemic changes implemented by the coaching staff affect his game? The 2018-19 Flames dominated the league with a deadly offense attacking off the rush (perfectly suited for the neutral zone wizard’s game). The 2019-20 team stumbled and bumbled with a reworked fore-check based approach under Peters. After Ward took over, the Gaudreau unit was more dangerous 5v5 suggesting they were able to adjust to the system eventually. There also seems to be a desire to get the Gaudreau line more involved defensively, as evidenced by the top line’s usage in playoffs, particularly against Dallas. Based on the results of that series and the top line’s poor impact in round one, that may be a misguided idea.
Secondly is the question of linemates. Seeing as none of Gaudreau, Lindholm, or Monahan are particularly effective puck hounds, the trio doesn’t seem like the best combination if Ward and the Flames are going to continue to emphasize puck retrieval and fore-checking. If Sean Monahan continues to struggle 5v5 and Gaudreau is tasked with dragging him around all season that may hinder his effectiveness as well.
After spending the last few minutes over-analyzing things, I’m going to remind myself and you that we should not over-analyze things. Gaudreau sits 10th in total league scoring since entering the league in 2014. One bad season, in which he still managed 40 helpers, will likely be a blip on the radar.
He’s still a premier playmaker up there with the best of them and we should realistically expect nothing less than a return to form. The system and his linemates will likely affect his point totals but it’s solely on him to be the difference-maker we know he can be. I fully expect him to be the game-breaking Johnny Gaudreau of old in 2021. Probably not 99 point Johnny Gaudreau but the ever dangerous set up man Johnny Gaudreau is reasonable to expect.
This year does feel different. Following the 56 game season he will have a single year remaining on his contract before hitting UFA. His limited no-trade clause also takes effect after this season. Another tough start or an additional stumble if and when playoff hockey returns to the ‘Dome may have final implications for Gaudreau and the Flames.