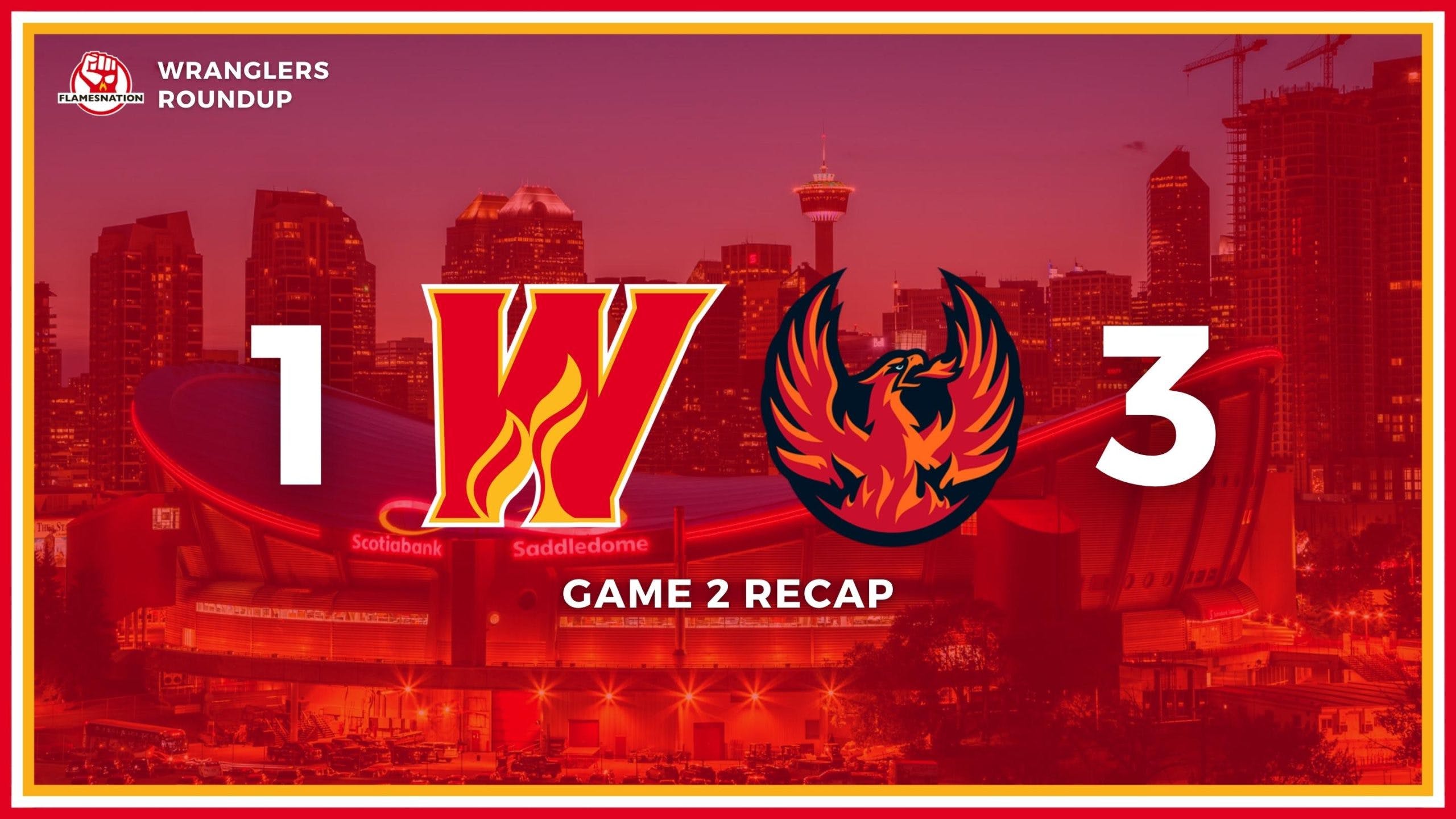 By Paige Siewert
1 month ago
The Calgary Wranglers played their second game of the season against the Coachella Valley Firebirds Monday night. This was the back end of the two-game season-opening series after falling 6-5 the previous afternoon. Dustin Wolf has a shaky start on Sunday but, he was given another shot at this team and made a much better showing for himself. Unfortunately, his teammates didn’t play as much of a complete game as him and fell 3-1.

Emilio Pettersen oddly took warmup with the team on Sunday and changed out of his uniform for the lineup announcements as a scratch. On Monday, he slotted into the lineup for his first game of the season. Also in the lineup for his season debut was Alex Gallant.
These two replaced Adam Klapka and Mitch McLain. There weren’t any specific reasons for these changes other than they’re running with a lot of depth and some other guys need some ice time.
Head Coach Mitch Love commented on this post-game saying:

“You want to get some guys in the lineup right? Early in the season here we wanted to add a little bit of speed with Pettersen. Guys that were with us last year that helped us be a competitive hockey team.”

The start wasn’t all that much different for Calgary as they give up two goals through the first 20 minutes. Just 3:41 into the period, Jesper Froden opened up the scoring for the Firebirds. The shots against Wolf continued to pile up and the Wranglers didn’t have much to answer back with. Only two shots the whole period to be exact.
Before the opening frame came to a close, the Firebirds scored another on the powerplay from Kole Lind and there wasn’t much blame to be placed on Wolf for that one. What he could have benefitted from was a little more fight from his teammates.
The Wranglers didn’t show many signs of life in the second period other than finally putting up some numbers in the shot category. They gave the Firebirds less opportunities but their lines still weren’t gelling. Just over halfway through the second period, Coachella Valley struck again with a goal from Ville Petman when a rebound took an awkward bounce off the end boards. That concluded the scoring in the second and shots finished up 23-14 favouring the Firebirds.
The third was the best effort the Wranglers showed all night with their lone goal coming off the stick of Brett Sutter. He did it with his dad in the building but it wasn’t enough to fully ignite a comeback for his team.

“I thought our third period was our best period but it’s hard to win when you play 20 minutes. Speed, tempo, pace, start on time. We got a lot of adjustments we need to make.”

Sutter scored 4:50 into the third with Walker Duehr and Nick DeSimone picking up assists. After this, the effort was there to try and follow up with at least another goal but not a lot has been clicking for this new squad. Shots are going wide, passes are weak or sloppy and the line combinations were completely scrambled towards the last third of the game.
Coach Love had some comments on the things that aren’t working right now saying,

“We don’t have enough guys doing their jobs right now and I think that falls into the identity piece of our group. Having some new bodies and some first-year pros into the mix. It’s our job as a staff to identify that and make sure the players understand the type of brand of hockey we need to play to be successful.”

The makeup of this team pretty much comes down to half returners and half fresh bodies. There are going to be some growing pains and hitting the road could be a good reset after a not-so-great season-opening series.

Mitch Love confirmed the guys will get a day off on Tuesday after playing on back-to-back days. After that, they will have a couple of days to hopefully clean things up in practice before they hit the road to play the Colorado Eagles this weekend. Their next game will be on Friday at 7:05 p.m. MT in Loveland, Colorado.
News
Recent articles from Paige Siewert