The good, bad and ugly of the Calgary Flames: games 1-5 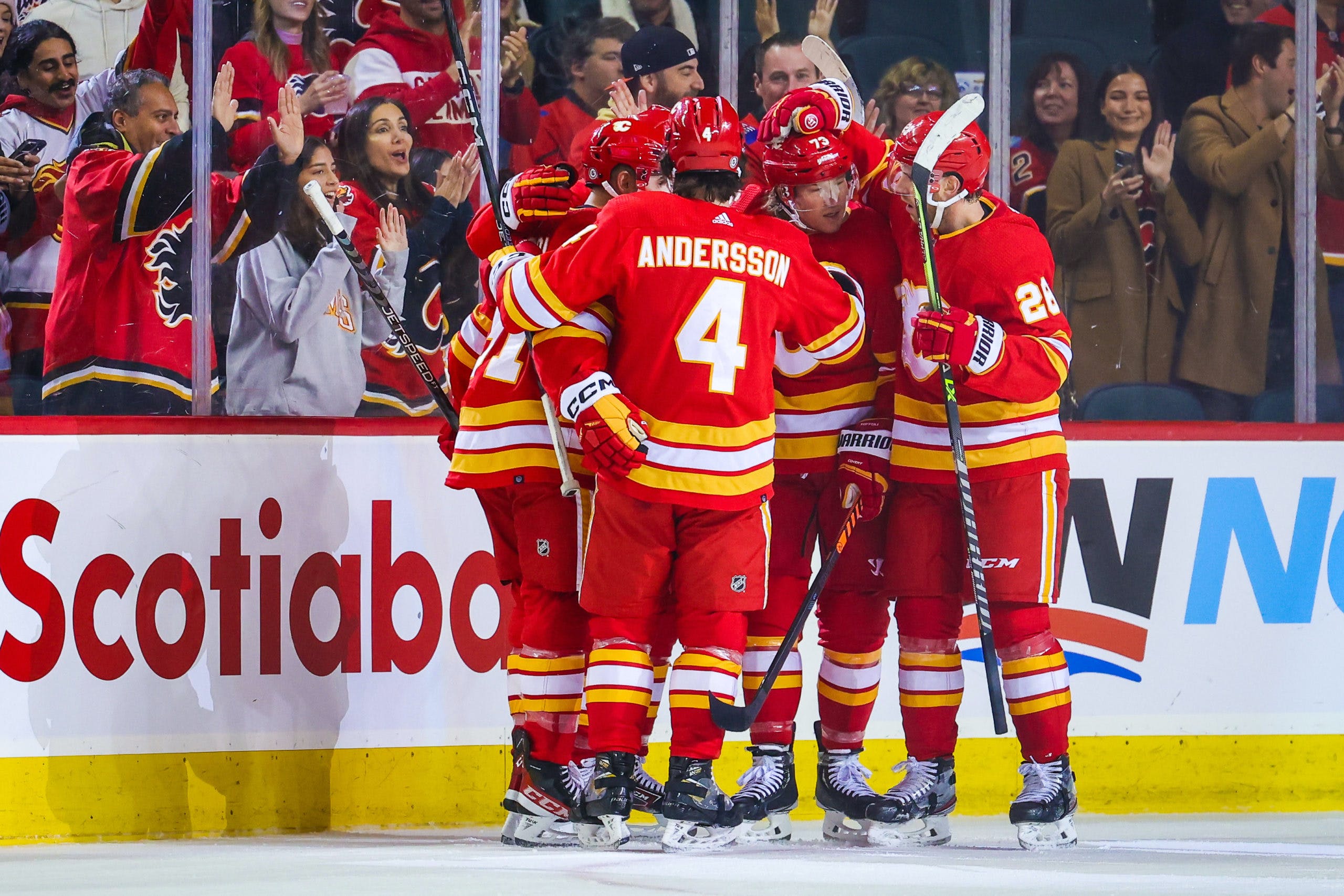 By Robert Munnich
1 month ago
This content brought to you by NHL Lines site Betway!
I am going to be starting a recurring column throughout this season breaking down the good, bad and ugly of all things Flames in five game segments. It could be on ice performances, off-ice news, or content from Flames fans across social media.
We’ll start with the first five games of this season.
It has been a great start to this Flames campaign. They’ve gone 4-1 with wins over some of the best teams in hockey such as the Avalanche, Oilers, Golden Knights, and Hurricanes. You can’t do much better than that. But let’s dive into some other storylines that have emerged from this young Flames season.

The new top line: Dube-Kadri-Mangiapane
Heading into the 2022-23 season, we all figured that the Flames top line was going to be Elias Lindholm centring Jonathan Huberdeau and Tyler Toffoli. But that has quickly changed through the first five games of the season.
The DNA line (Dillon, Nazem, Andrew) have overtaken them as the go-to line for offence.
The DNA line has dominated from a possession standpoint. If they continue to put up these types of numbers, they’re going to be one of the best lines in the NHL. The most impressive stat is that they are accounting for nearly 70% of high danger chances when they are on the ice as a line.
(All stats courtesy of Natural Stat Trick)
What makes the DNA line so effective is that all three players are very good skaters, ferocious forecheckers, and all have loads of skill. They are a perfect match for each other. The only question is how long are they going to remain together? They have been so good as a line that Darryl Sutter might have to break them up to get other lines going throughout the forward group. However, it is good to know that they can always go back to this trio as they know it works well.
Spread out scoring
As we all know, last seasons edition of the Flames relied heavily on the top line of Gaudreau-Lindholm-Tkachuk to lead the charge offensively. That line accounted for 124 goals on their own. That made up over 42% of the goals the Flames scored last season. The scary thing about this is what happens if that line goes cold for a few games? Well, that happened in the playoffs against the Edmonton Oilers. If the Flames are going to have more success this season, they’ll have to get more scoring from the rest of the roster.
We have seen just that through the first five games. Only two players have yet to register a point this season, Chris Tanev and Noah Hanifin. Having a balanced scoring attack will only help the Flames. Especially come playoff time.

THIS ARTICLE PRESENTED BY BETWAY!

Here are some of the best plays from the first couple weeks of the season.
Biggest hits
Nicest goals
This might be the best clip from the first 5 games. Milan Lucic levels Jaccob Slavin as he tries to get on the ice from the bench.

Jacob Markstrom
Markstrom has not been particularly strong to start the season. He has a 2.93 GAA and an 0.882 save percentage in four games. The most concerning part of his game have been his starts. In three of his four starts, he has given up an early goal and put the Flames behind the 8-ball. Luckily the team has been able to come back in those games and pick up victories.
I don’t think fans should be all that concerned about Markstrom’s play long term. He has been battling an illness to start this season. I don’t think it is fair to expect Markstrom to play at an elite level when going through that. On top of that, every goalie goes through their ups and downs throughout each season. This may happen to be a blip on the radar.
Markstrom will be fine when he is fully recovered from this illness he has been dealing with. The level of concern should be a 2 out of 10.
Jonathan Huberdeau has underwhelmed
I don’t think Jonathan Huberdeau has hit his stride quite yet with the Flames. He has yet to show why he is a $10.5 million player. We have seen little flashes of brilliance when it comes to his play making. But he has yet to take over a game or show his elite ability to drive offence at 5 on 5. The most concerning part of his game is that he has had very few chances to score in his first 5 contests. He’s made a lot of nice passes but has yet to be dangerous using his shot.
But that’s okay. This is a player who has only known playing for one organization his entire career which is across the continent. He is still trying to get used to playing with new linemates and getting used to playing a new system under Darryl Sutter. The good news is that he has still put up 4 points in 5 games. The fact he is still picking up some assists while struggling is a good sign. Just imagine the type of damage he can do when he is one his game and feeling comfortable with his new team?

Reverse retro
The Flames new reverse retro jersey has had some mixed reviews among the fan base. I personally think it looks alright. It is a fun play on the pedestal jersey from the 1990s.
But I am not including the jersey in the ugly category based off how it looks. I put it in here because of the jersey schedule the Flames came up with for it.
The Flames are going to wear the reverse retro jersey four times in a row in the beginning of December. They will not wear them after that.
I believe this jersey campaign has turned into nothing but a cash grab by the team. They are going to wear them a few times before the holiday season to sell as many jersey’s as possible. This jersey schedule comes across as a greedy, disingenuous move by the team.
In an ideal world, they would have worn the jersey 4-6 times and spread it across the entire season. Sure, wear the jersey a couple times before the December holiday season. The Flames are running a business and they’re trying to make money. I appreciate that. But could they not wear it once a month throughout the season and celebrate it and let the fans have some fun with it? The idea of making it a one and done situation rubs me the wrong way.
What have been your favourite moments of the first five games of the season? Let us know in the comment section!
Editorials
Recent articles from Robert Munnich