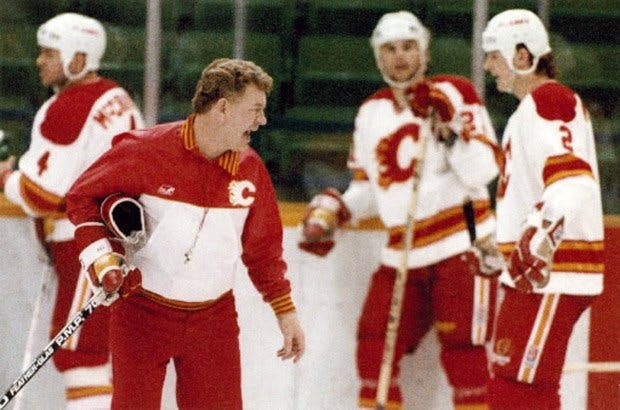 By Zach Laing
1 year ago
Welcome back to another edition of Throwback Thursday!
This week in 1987 (May 22), the Calgary Flames hired Terry Crisp as their head coach.
Crisp, then 1987, joined the Flames after spending the two years prior as the team’s AHL head coach of the Moncton Golden Flames. In his new role with the big club, it didn’t take long for his impact to be felt.
In his first year the Flames posted a 48-23-9 record and a year later, he led the team to their first Stanley Cup win.
Crisp was dispatched only a year later in 1990 after the team got eliminated in the first round of the playoffs. That, too, was likely due to Crisp not exactly getting along with many of the players.
“Moreover, there was a feeling that the Flames, a team with the best personnel in the league, were not getting as much out of their talent as they could with somebody else running the bench,” penned Calgary Herald scribe Eric Duhatschek. “Crisp’s tough-talking approach alienated all but a handful of players on the team.”
He remains the winningest Flames coach when accounting for points percentage.
Zach Laing is the Nation Network’s news director and senior columnist. He can be followed on Twitter at @zjlaing, or reached by email at zach@oilersnation.com.
Uncategorized
Recent articles from Zach Laing