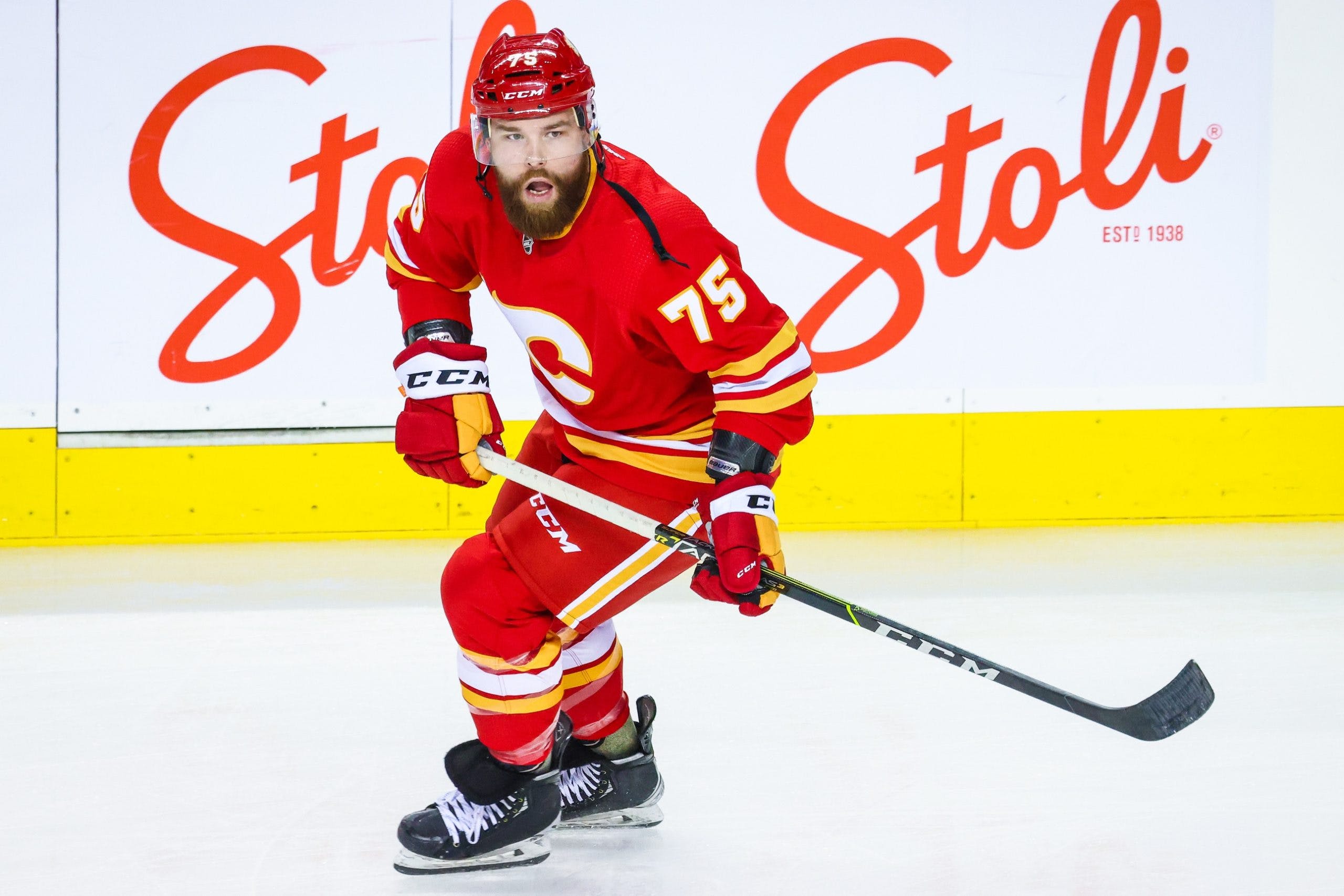 By Ryan Pike
2 months ago
As the month of October begins and we’re nine days away from the National Hockey League’s roster filing deadline, there are two things we know: Mitch McLain has been one of the best players in Calgary Flames training camp, and Mitch McLain has a pretty small chance of making the Flames roster.
Those two notions are probably related.
First, some background on McLain. He’s 28 – he turns 29 in December – and he’s a Minnesota kid. He was NHL draft eligible in 2012 as a high schooler, but wasn’t drafted. He spent two seasons in the BCHL with the Langley Rivermen, also wasn’t drafted there, and then spent four seasons with the NCAA’s Bowling Green State University, including playing as captain in his senior year.
Since graduating from Bowling Green in 2018, he’s puttered around minor pro primarily as American Hockey League depth for teams like the Iowa Wild and the Milwaukee Admirals. The scouting report on McLain has consistently been that he’s not incredibly skilled (his offensive peak in the AHL has been 23 points), but he knows how to work hard and he’s got a willingness to do the dirty work – defensive situations and playing a grinding, physical role – so that the NHL prospects on his team can have a path to development and success.
Watching his interviews, he seems very savvy and self-aware, too. (You can get why he was named captain in college.)
Here’s the thing about self-awareness: it can lead to success if harnessed in the right way. Watching McLain through three pre-season outings, he’s had a pretty clear role based on how he’s been placed in the line-up:
In Darryl Sutter’s system, the fourth line role is to play a physical, up-tempo forecheck and essentially ensure that the pace of the game doesn’t go down and that the opposition doesn’t get a free pass. Offence is considered a bonus.
With low expectations and a really clear, specific role, McLain has been excellent. You could argue that he’s been more noticeable than some of the Flames’ drafted prospects in the same camp, and that may be because McLain doesn’t seem to be doing a lot more than he’s being asked to do. The parameters of his role are pretty narrow, and he’s performing really well within them.
Following the game in Edmonton, Darryl Sutter had this to say about McLain’s performances: “Guys that work hard, that’s their M.O. We’ve had several of them older guys play through the first four or five games and that’s why: they out-work younger guys.”
If there’s one thing that might have enabled McLain’s strong camp so far, it’s the lack of expectations. He was signed to a two-year AHL deal over the summer. He’s performing with a built-in safety net, knowing that eventually he’s probably headed across town to WinSport to join the Wranglers. If McLain doesn’t make the team, will fan disappointment be as boisterous than if Jakob Pelletier or Connor Mackey doesn’t make it? And do you think Pelletier and Mackey aren’t feeling the weight of the possibility that with a good camp, they could be in the NHL? Or that they could be back on the farm with an ordinary camp?
Freed from the weight of internal and external expectations in a way that most other players in camp can’t be, McLain can just… play. And 10 days into main camp, McLain has been a revelation.
It’s completely possible that McLain will end up being just a stalking horse for the Flames’ top prospects at this camp, a guy whose work ethic and gumption pushes the more skilled players to another level – Brett Sutter, in a similar role, was compared to Bull Durham‘s Crash Davis by Postmedia’s Rob Tychkowski. But pro sports is a results-based business and the Flames under the current regime have rewarded similar players in the past, notably in the cases of Ryan Lomberg and Garnet Hathaway.
Time will tell what happens with McLain. But one thing is definitely true: he’s made the first 10 days of camp much more interesting than anybody expected him to.
Editorials
Recent articles from Ryan Pike