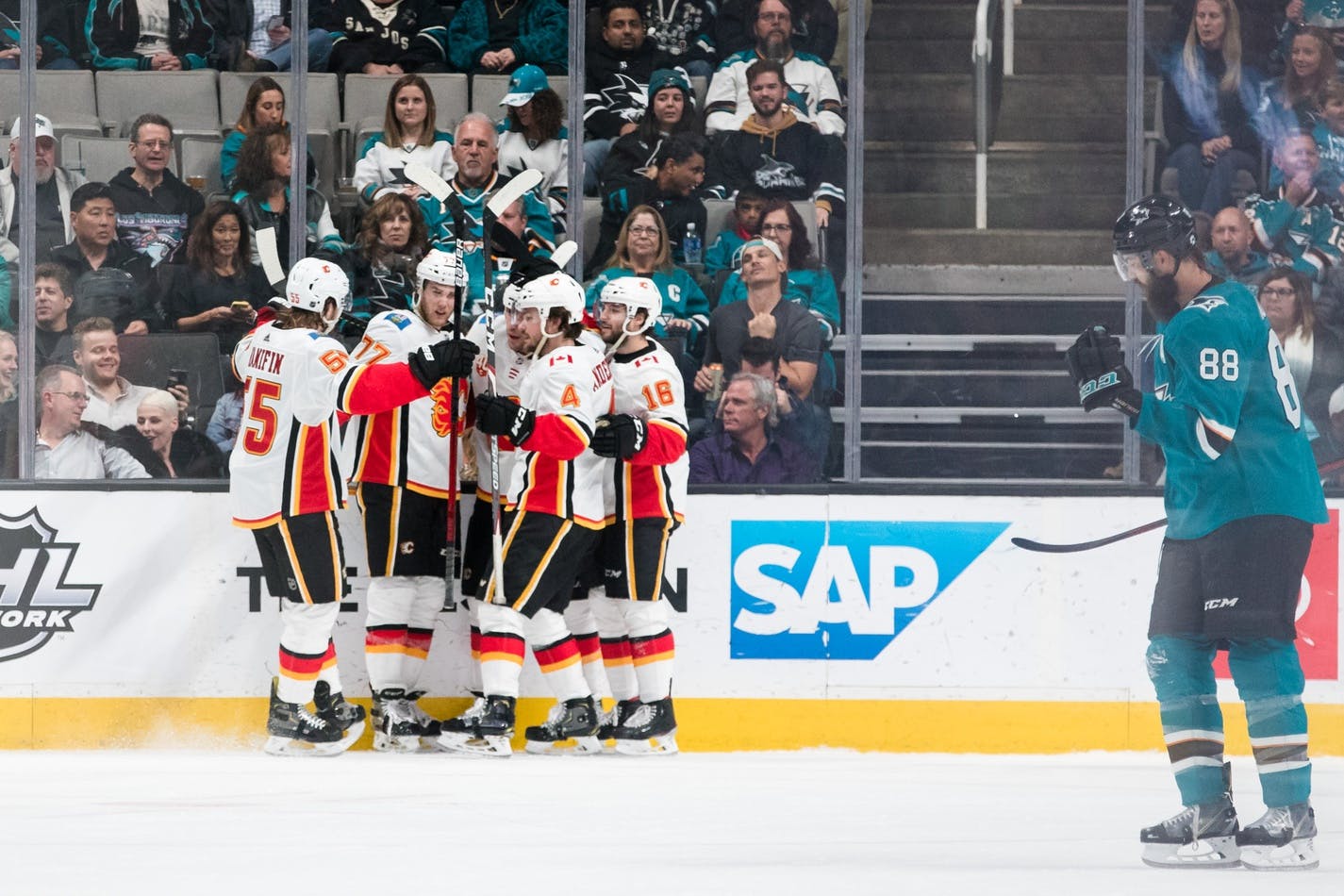 Photo credit: John Hefti/USA Today Sports
By Ryan Pike
2 years ago
Comments
Friends, by this point in the COVID-19 quarantine period, if you’re like us you have way too much pent up energy. Rather than doing something useful, like learning a language, perfecting a recipe or getting in shape, we thought it’d be fun to learn more about the CBA.
Welcome to CBA School!
Let’s begin with Article 1: Definitions.
Article 1 isn’t terribly meaty, as it’s primarily a section that defines concepts and refers to other Articles for more details. But there are a few things to grasp before we dive into the details later on.
My thoughts in italics.
Accrued Season

“Accrued Season” means any League Year during which a Player was on a Club’s Active Roster for 40 (30 if the Player is a goalie) or more Regular Season Games, provided that, for the purposes of calculating an Accrued Season under this Agreement, games missed due to a hockey-related injury incurred while on a Club’s Active Roster shall count as games played for purposes of calculating an Accrued Season but only during the League Year in which the injury was incurred and a maximum of one additional season.

Advertisement
Ad
Advertisement
Ad
An Accrued Season is important because once you have one as an under-20 player, it starts the clock towards unrestricted free agency. Other than that, it’s primarily a mechanism to determine how much pension a player can get when they retire.
Active Roster

“Active Roster” shall be determined as follows: Commencing on the day prior to the start of the Regular Season, and concluding with each respective Club’s last NHL Game in a League Year, Active Roster shall include all Players on a Club’s Reserve List who are signed to an approved and registered SPC, subject to the provisions of Article 11, and who are not on the Injured Reserve List, Injured Non-Roster, designated Non-Roster, or Loaned. A Player who is on a Conditioning Loan is included on a Club’s Active Roster. During Training Camp, a Player shall be deemed to be on the Club’s Active Roster only if he had been on the Club’s Active Roster after the Trade Deadline in the preceding season on other than an emergency recall basis.

Advertisement
Ad
Advertisement
Ad
It’s a bit odd that this isn’t defined elsewhere, but yes: the Active roster is all the players that have contracts, aren’t injured or non-roster, and haven’t been assigned to the minors, Europe or junior.
Buy-Out

“Buy-Out” or “Ordinary Course Buy-Out” shall have the meaning set forth in Section 50.9(i) of this Agreement and Paragraph 13 of the SPC.

“Buy-Out Period” shall have the meaning set forth in Paragraph 13(d) of the SPC.

Buy-Outs are complicated, and weirdly only defined within the Standard Players Contracts themselves (which are an Appendix to the CBA). We’ll get into this.
Advertisement
Ad
Advertisement
Ad
Compensatory Draft Selection

“Compensatory Draft Selection” means a draft pick awarded to a Club pursuant to the terms of Section 8.3 of this Agreement.

When an unsigned first round player doesn’t sign with the team after two years (and the drafting team loses their rights) or dies, the team that drafted them gets a compensatory second round pick that corresponds with the pick they were drafted with. (For example: If the sixth overall pick in 2018 doesn’t sign (or dies), that team gets the sixth pick in the second round in 2020 as compensation.)
Conditioning Loan

“Conditioning Loan” means the Loan of a Player on a Club’s Active Roster, for conditioning reasons, in accordance with the terms of Section 13.8 of this Agreement.

“Defected Player” shall have the meaning set forth in Section 10.2(b) of this Agreement.

We’ll get into this in some detail later, but a Defected Player is essentially one who has obligations to an NHL club – either an existing contract or negotiating rights via the draft or an expired contract – but signs with a non-affiliated club. (Think Linden Vey or Spencer Foo signing in the KHL when they were restricted free agents.)
Draft Choice Compensation

“Draft Choice Compensation” means the right of any Club pursuant to Section 10.4 of this Agreement to receive draft pick(s) from another Club, to compensate the Club for the loss of a Restricted Free Agent.

Not to be confused with Compensatory Picks.
European Player

“European Player” has the meaning set forth in Section 9.1(c) of this Agreement.

Advertisement
Ad
Advertisement
Ad
Want to know how convoluted the CBA can be? Section 9.1(c) doesn’t define anything, but points to Section 8.4(a)(v) – all that section says is players 22 and older who have never been drafted are free agents. Basically, if an undrafted Euopean signs their first NHL deal at ages 25 to 27, they’re under entry level compensation limits for one season. if they sign at age 28 or later, they’re never subject to entry level limits.
These can easily be confused with Defected Players, so here’s the distinction: Europeans who are drafted but don’t sign become Defected Players (and then free agents), while Europeans who never get drafted are just considered European Players.
Goaltender Exemption

“Goaltender Exemption” shall have the meaning set forth in Section 16.13 of this Agreement.

These are the six different types of free agents under the CBA.
Injured Non-Roster

“Injured Non-Roster” shall have the meaning set forth in Section 16.11(a) of this Agreement.

“Injured Reserve List” or “Injured Reserve” means the list of all Players who, because of injury, illness, or disability are deemed by their respective Clubs to be unable to render playing services to such Clubs for an extended period of time as set forth in Article 16 of this Agreement.

“Non-Roster” or “Non-Roster List” shall have the meaning set forth in Section 16.12 of this Agreement.

“Professional Games” includes the following: any NHL Games played, all minor league regular season and playoff games and any other professional games played, including but not limited to, games played in any European league or any other league outside North America, by a Player pursuant to his SPC.

The key concept here: “pursuant to his SPC.” Pro games played when not signed to an NHL deal don’t matter. Carl-Johan Lerby’s games this season while signed to an active SPC and loaned to Sweden? They count. David Rittich’s games before he signed his SPC? They don’t.
Qualifying Offer

“Qualifying Offer” shall have the meaning set forth in Section 10.2(a) of this Agreement.

“Reserve List” means the list of all Players to whom a Club has rights including all Unsigned Draft Choices, all Players signed to an SPC (whether or not currently playing in the NHL), and all Players who have signed an SPC but who have subsequently been returned to Juniors. A Club may have on its Reserve List, at any one time, not more than 90 Players, which shall include the following:
(a) Not more than 50 Players signed to an SPC and not less than 24 Players and 3 goalkeepers under an SPC. Age 18 and age 19 Players who were returned to Juniors, and who have not played 11 NHL Games in one season, shall be exempt from inclusion in the 50 Player limit. Any Club violating this provision shall be liable to loss of draft choices as determined by the Commissioner.
(b) Unsigned Draft Choices.

“Trade Deadline” shall have the meaning set forth in Section 13.12(j) of this Agreement.

The Trade Deadline is set at 40 days before the final day of the regular season.
Unconditional Waivers

“Unconditional Waivers” means the process by which the rights to a Player are offered to all other Clubs, without a right of recall at a Waiver price of one-hundred and twenty five dollars ($125) prior to a Club exercising its right to terminate a Player’s SPC pursuant to Article 13 of this Agreement and Paragraph 13(a) of the SPC.

“Waivers” means the process by which the rights to a Player are offered to all other Clubs pursuant to the procedure set forth in Article 13 of this Agreement and shall include Regular and Unconditional Waivers.

We’ll get into this later, but one-way and two-way deals have nothing to do with waivers. Nothing at all. Nobody ever claims anybody off Unconditional Waivers.
Advertisement
Ad
Advertisement
Ad