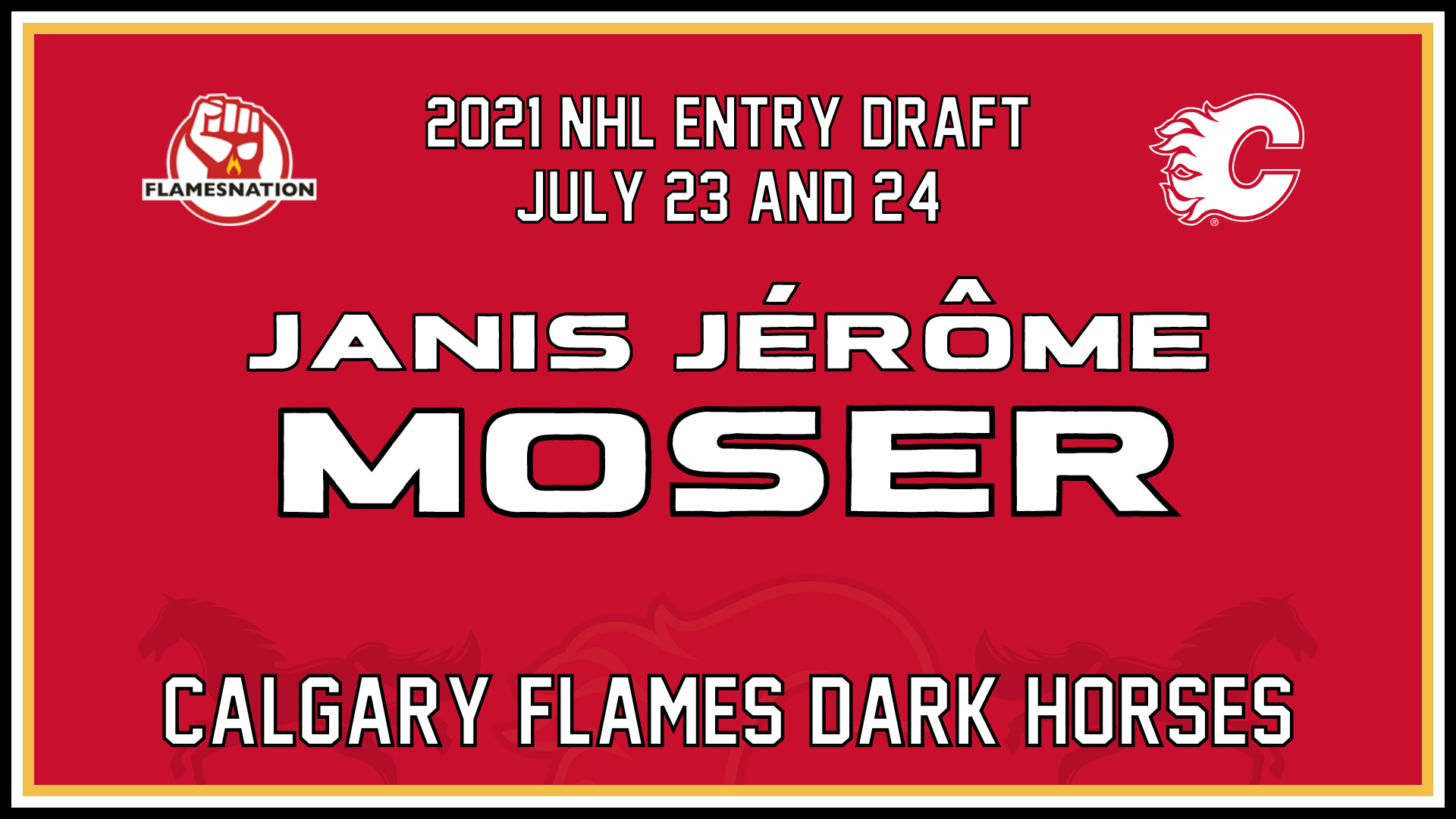 Photo credit: Graphic by Mike Gould
By Mike Gould
1 year ago
Comments
Rounds two through seven of the 2021 NHL Entry Draft will take place on July 24, 2021. The Calgary Flames currently possess a total of six picks in those rounds, having acquired the Edmonton Oilers’ third-round selection before trading their own fourth to the Los Angeles Kings. In this “Draft Dark Horses” series, our team of writers will evaluate some of the notable prospects projected to be available in the later rounds of the draft.
First up in this series: Janis Jérôme Moser, a 21-year-old defenseman who took a massive step forward last season while playing in the Swiss National League.

All 31 NHL teams passed on Moser in both the 2019 and 2020 NHL Entry Drafts. He stands 6’1″ and weighs 175 pounds.
Always billed as an efficient skater and a defensive-minded presence on the back-end, Moser scored at a relatively pedestrian rate in his first two full NL seasons. He barely registered offensively with EHC Biel-Bienne despite earning back-to-back nods at the World Juniors in 2019 and 2020.
Advertisement
Ad
Advertisement
Ad
Moser’s offensive output skyrocketed to historic levels in 2020–21, thrusting him out of the shadows and into the conversation as one of the top players on his team (if not the entire league).

Janis Jerome Moser should get picked as a 20-year-old in the #2021NHLDraft. And I’m not talking like late-round flier. I’m talking worthwhile mid-round pick. Consistently one of the best players on the ice in a league that welcomed its fair share of NHL talent. pic.twitter.com/izdOf4bB7E

Despite being one of Biel-Bienne’s younger players, Moser served as captain and ranked fifth on the team in scoring. Former NHL forward Marc-Antoine Pouliot, 15 years Moser’s senior, scored just two more points than the young defenseman in five fewer games.
Moser scored 30 points in 48 NL games. Individually, he hadn’t produced at that rate since his days playing for Biel-Bienne’s U-15 team in 2014–15. Even in 2017–18, when Moser captained Biel-Bienne’s U-20 team, he scored just 22 points in 41 games.
Advertisement
Ad
Advertisement
Ad
In a piece for McKeen’s Magazine (behind a paywall) detailing the top over-age players eligible for the 2021 draft, Chapin Landvogt celebrated Moser’s dramatic offensive improvement as possibly completing a player already proficient in other areas of the game.

Unquestionably, Moser has to be considered one of the top re-entry candidates for this year’s NHL draft after his recent season in the NL. In his final year of draft eligibility, Moser not only served as the captain of Biel-Bienne, but he emerged as one of the league’s top defensemen. The 6’1 defender was on the scouting map last year as a re-entry after a strong performance at the World Junior Championships and in the NL. […]
Interestingly, the 6’1”, 175-pound defenseman is actually known for his very sound skating and solid defensive abilities, [meaning] this season’s offense [has] some in Switzerland asking whether there’s another Roman Josi on the way. We won’t go that far at this point, but if he’s somehow not drafted, then expect an NHL team to give him an ELC basically the day after the draft.

He played in all situations for Biel-Bienne this season, skating on the team’s top defensive pair, top penalty kill and power play units, and he showed a lot of leadership despite his relatively young age on the roster. He has a mature defensive game and is able to consistently make smart decisions with the puck on his stick. He shines most as a pure defender, using a long stick that allows him to control and maintain gaps and close off passing lanes with strong stick positioning.

Moser played his first two full seasons in the top Swiss pro league in 2018–19 and 2019–20. Over those two campaigns, he totaled just two goals and 16 points in 83 games.
Last season, Moser scored nine goals and 30 points in just 48 games. He ranked seventh in the entire National League in scoring by a defenseman — one spot ahead of former Flames rearguard Rafa Diaz — while being significantly younger than his competition. All six defensemen who outscored Moser in 2020–21 are at least 30 years old.
Advertisement
Ad
Advertisement
Ad
Moser didn’t just lead all U-21 NL defensemen in scoring (by a mile); he led all U-21 NL players in scoring. He also led all U-23 NL players in scoring.
No other U-21 NL defensemen in the 83-year history of the Swiss National League has scored more points in a season than Moser’s 30 — not even Roman Josi, who topped out at 21 in 26 games during the 2009–10 season before tallying 17 points in 26 contests the following season.
Moser debuted for Switzerland’s U-20 World Junior team in 2019, registering two assists in seven games. The following year, he posted four helpers in five contests. Having aged out of U-20 competition, Moser instead competed alongside the likes of Timo Meier and Nico Hischier for Switzerland at the 2021 IIHF World Championships; he contributed two assists in seven games.
Advertisement
Ad
Advertisement
Ad

The Flames’ pool of defensive prospects remains relatively thin. After selecting Juuso Valimaki in the first round of the 2017 draft, Calgary waited until the second round in 2020 to pick its next rearguard (Yan Kuznetsov).
Jérémie Poirier, Jake Boltmann, and Ilya Solovyov also joined Calgary’s system in last year’s draft while the Flames also signed undrafted free agents Johannes Kinnvall, Connor Mackey, and Colton Poolman.
However, many of the Flames’ recently-drafted defensive prospects will remain in lower developmental leagues for many years to come. Mackey and Valimaki will likely push for full-time spots in Calgary next season, especially if some of the team’s veteran blue-liners depart this offseason.
Moser is a prospect who still has plenty of future potential for growth but has already spent lots of time developing overseas in a top-tier pro league. There’s a decent chance he becomes the oldest player selected in this year’s draft. He could also be closer to the NHL than anybody else selected in the mid-to-late rounds.
Advertisement
Ad
Advertisement
Ad
Back in May, European journalist Lyndon Viglino reported Moser’s representatives have already discussed potential NHL fits with “more than 10” franchises (including the Arizona Coyotes). If Moser is not selected in the 2021 draft, he will become a free agent eligible to sign with any NHL club.
Here’s where Moser places in a selection of different 2021 draft rankings compiled by various outlets and writers.
McKeen’s Hockey — 151st
Future Considerations — 133rd
The Athletic (Corey Pronman) — 89th
The Athletic (Scott Wheeler) — 89th
NHL Central Scouting (European Skaters) — 25th