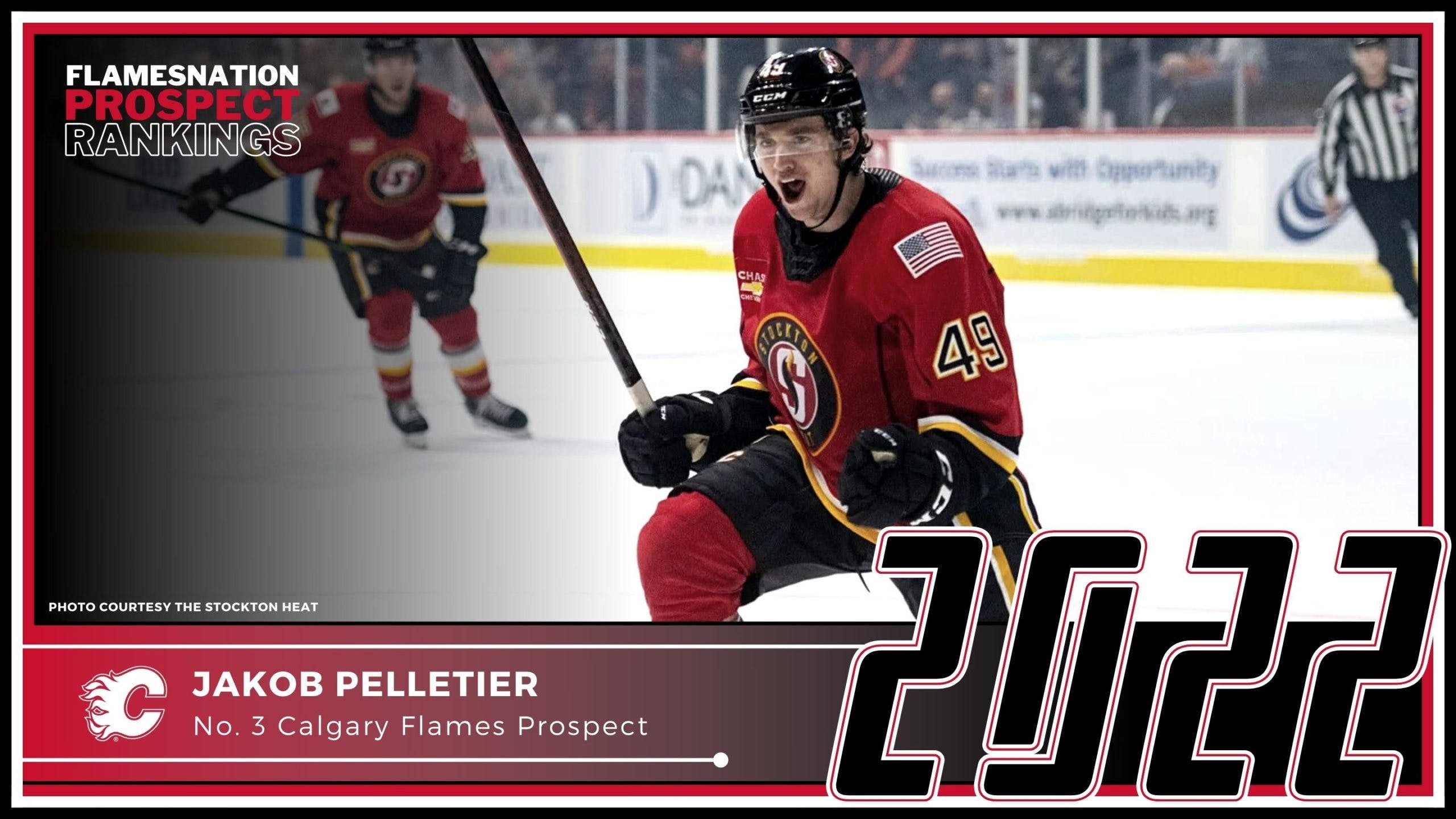 Photo credit: Graphic by Mike Gould
By Shane Stevenson
5 months ago
Comments
The top 3 prospects on everyone’s list were unanimous – no matter the order these next three players are in these are the players who FlamesNation and its writers have picked as the top 3 within the organization. Coming in at third is the prospect that may be the most well-rounded winger the Flames have drafted themselves in some time.
I’m talking about Jakob Pelletier.
Jakob Pelletier
Left-handed winger
Born Mar. 7, 2001 (age 21) in Vanier, Quebec
5’10”, 180 pounds
Drafted in the first round (26th overall) by CGY in the 2019 NHL Draft
Every single place Pelletier has played within the last 3 years, he’s ended up on that team’s top line. Moncton Wildcats, the Val d’Or Foreurs, the Stockton Heat, and the 2021 World Junior Canadian National Team.
There’s this common misconception that seemingly appears everywhere about Pelletier and his ceiling – and every single time it’s questioned Pelletier shows up and busts through it. One of the highest hockey IQ wingers I’ve seen at his age AND he’s been developing very well.
The World Junior team is the best example. Pelletier was originally projected to miss the team. After camp he made the team and everyone presumed as the extra forward. By the time the round robin was ending he was on the top line and going over the boards every second shift when needed in the medal round.
Advertisement
Ad
Advertisement
Ad
Don’t just take my word for that, take Calgary Wranglers head coach Mitch Love’s word:

I think he plays the game with a high level of hockey IQ. It allows him to make that jump from junior to pro. Obviously things are faster, guys are stronger, little bit more mature than junior, but he quickly figured out what he could or couldn’t do based on his size, and being a first-year pro. And really at the end of the day, you ask any coach, they want to find trustworthy players that are going to be coachable, going to be asked to do something and try to execute, along with bringing your skill set and having a good confidence base on performance. And that’s what he did all year. He’s another guy just similar to Dustin [Wolf] in a sense that now he’s got to follow that up. I know he’s having a big off-season. He’s getting stronger, and his next goal is to try and push for a roster spot with the Flames. Whatever happens after that, those decisions will be made based on him and how he’s playing and performing. I’m excited to see what year two looks like for him.

Year two will more than likely feature Pelletier’s NHL debut and going forward his opportunities will be given to him if he continues to work as hard as he always has.
The best thing I could possibly do to show you all of Pelletier’s skill is include some videos.

Rookie #Flames prospect, Jakob Pelletier, 20, already showing a penchant to author the big goal. This beauty in OT on Friday was his second snipe in extra time. Included in his Stockton-leading 17 points (7 g, 10 a) in 14 games is an AHL-best four GWG’s. pic.twitter.com/loFJ6JWVpe

As we can see in this video Pelletier steps on the ice and gets possession within 3 seconds. He has the zone awareness to not charge the net initially and go up the wall. Keeping his head on a swivel he sees the opposing defenceman cheat up ice so he then cuts back to charge the net for the goal. Not often you actually see smart goals like this scored.
Advertisement
Ad
Advertisement
Ad

Jakob Pelletier comes very close to making this a 3-0 game with this rush. Cuts around the defenceman but can’t beat Olivier Rodrigue pic.twitter.com/HdBqSJ76Ml

Attacking off the rush can be difficult in the pros – here Pelletier makes a strong push with speed to get on the inside of the defenceman. After gaining position he’s strong enough to shield the puck and drive the net. He may not score in this clip but that’s the kind of offensively aggressive move that’s needed in the NHL.

🔥There it is! Jakob Pelletier has now passed Mark Jankowski (56 in 2016-17) for sole possession of the Stockton Heat rookie scoring record as he records his 31st assist and 57th point in the AHL. #Flames pic.twitter.com/qlszNWhPci

On the power play with so much movement going on passing lanes are open for mere milliseconds. Pelletier calmly delivers the centering pass to an open player in front of the net leading to the goal. Not afraid to step forward off the wall to make the pass either – a trait Toffoli and Mangiapane have at the NHL level that gets them constant praise.

🔥Pelletier has 19G + 25A in 45GP as he continues his amazing rookie season. #Flames pic.twitter.com/j6RjpSbckA

Scoring ability is always nice – it’s even better when it can happen late in a season. This video is from March of last season where Pelletier potted three nice goals to pad to his already great statistical rookie season (27g-35a-62p // 66gp).
Advertisement
Ad
Advertisement
Ad
Robertson never had to deal with a full minor pro or junior season with COVID restrictions either before making the jump to the NHL – for what it’s worth.

Jakob Pelletier has a lot of people saying “do it again” in regards to his first AHL season – I am not one of them. I think if he plays another 66 games in the AHL his numbers would improve. He’s done nothing but get better every single season and he’s given me, Flames management, and the fans absolutely no reasons to be disappointed to date.
I refuse to put a hypothetical ceiling on the guy. Lots of people will say he’s a middle six winger, but from watching him so far, I’m not going to bet against him. He always proves his nay-sayers wrong.
Advertisement
Ad
Advertisement
Ad
He’s going to be able to play with either Mikael Backlund, Nazem Kadri, or Elias Lindholm as his center in the NHL – all players that are capable of helping him grow. Not to mention a superstar LW that also happens to be a French Canadian just joined the Flames locker room for the next 9 seasons.
He’s impressed all of us – now he needs to show Darryl Sutter he can do this shift in and shift out for a full NHL grind. If he shows well, he’ll be given the opportunity. Don’t ever expect to see Pelletier lace up for fourth line duty – that’s not the job and/or role they want him to play in.
Without another NHL signing Pelletier is slotted to make the team. Even with another NHL signing don’t count him out – and I would certainly expect to see him in some capacity should the Flames qualify for the 2023 post-season
Advertisement
Ad
Advertisement
Ad
Pelletier’s time is almost here – don’t blink or you’ll miss it.