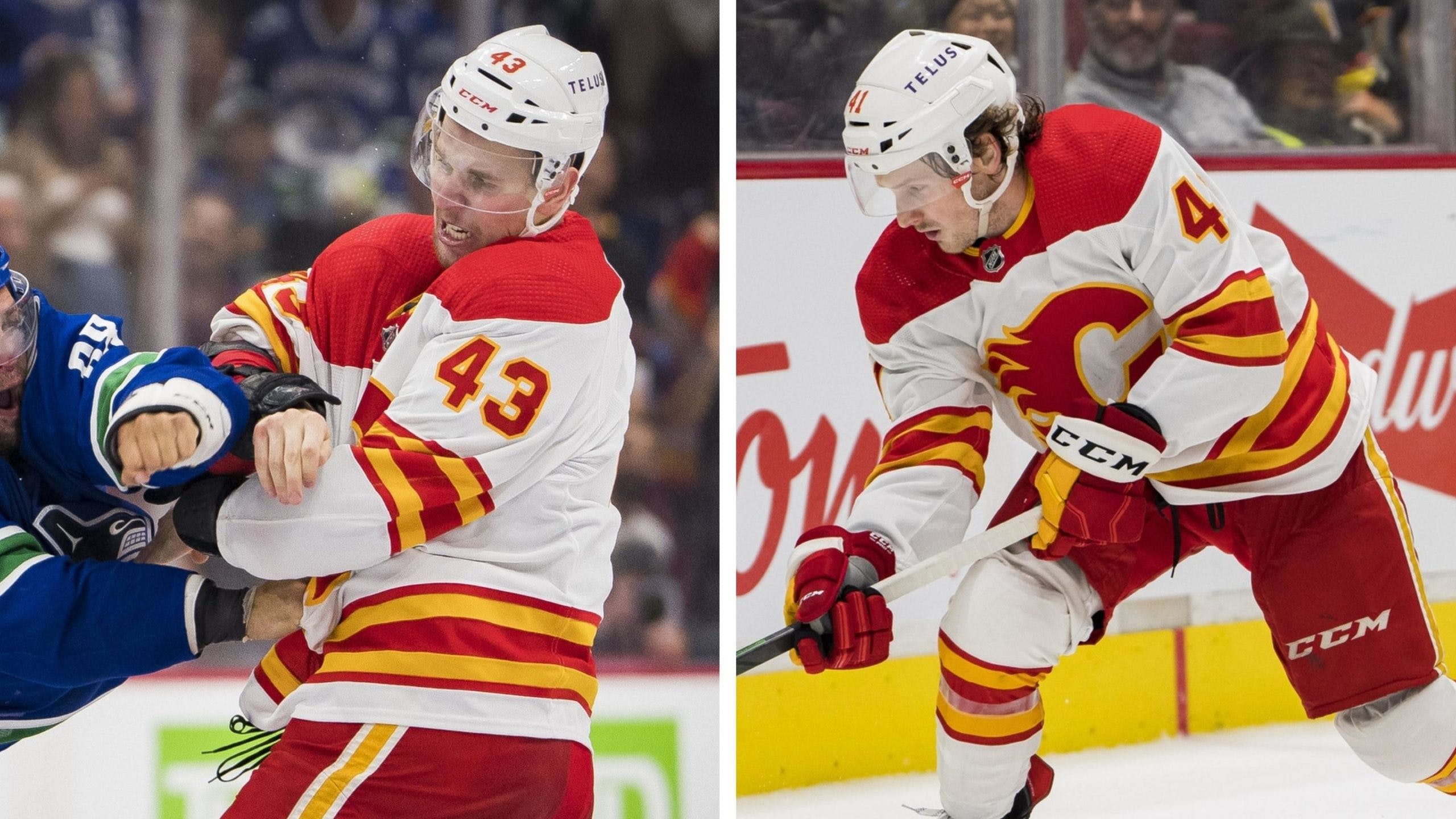 But Klapka and Phillips also have some things in common. They’re both right-handed wingers, and they both entered the Flames’ system as relative afterthoughts — Phillips was a sixth-round pick in the same draft class as Matthew Tkachuk, Dillon Dube, and Adam Fox; Klapka was an undrafted free-agent signing from the Czech Extraliga this past spring.
Most importantly, both Phillips and Klapka have put on a show for fans, media, and Flames brass alike in the team’s early evaluation stages. The two players both skated for the Flames’ traveling squad during Sunday’s split-squad action against the Vancouver Canucks.
Advertisement
Ad
Advertisement
Ad
Phillips has been a key contributor for the Flames’ American Hockey League affiliate in each of the last three seasons, leading the Stockton Heat in scoring in both 2020–21 and 2021–22 (he might’ve done the same in 2019–20 had a knee injury not prematurely ended his year). He helped the Heat go all the way to the AHL Western Conference Final just a few months ago.
But two factors have damaged Phillips’ NHL aspirations over that period: mediocre exhibition showings and the Flames consistently being one of the league’s healthiest teams, severely limiting call-up opportunities.
Phillips only has control over one of those things, and he went to work at addressing it on Sunday. He peppered Canucks goaltenders Spencer Martin and Arturs Silovs (who split the game) with five shots on goal and was a fixture on the Flames’ top power-play unit, taking the lead in moving things around from his usual position up high in the offensive zone.
Advertisement
Ad
Advertisement
Ad

Matthew Phillips with a sneaky toe drag shot on the powerplay. pic.twitter.com/zXpESp6bWN

That all came to a head in overtime. Shortly after coming ever-so-close to beating Silovs to score the OT winner himself, Phillips made a pin-point feed through traffic to set up Michael Stone for the easiest one-time goal he’ll ever score.
It’s a play we’ve seen Phillips make time and again in the AHL, and he put it to good use to cap off an impressive win for the Flames’ “B Squad” over some of the Canucks’ top guns.

Michael Stone wins it in overtime!

Matthew Phillips was Calgary's best forward. He makes an outstanding pass on this goal. pic.twitter.com/75M1dZlG14

Advertisement
Ad
Advertisement
Ad
Both Phillips and Klapka showed well in the Flames’ practice scrimmage at the Scotiabank Saddledome on Saturday morning, with Klapka looking off Milan Lucic on a two-on-one rush and roofing a heavy wrister past Dustin Wolf.
In his post-practice media availability, Flames head coach Darryl Sutter said Klapka was “pretty awesome” and the team’s “best player” at the Penticton Young Stars Classic.
Klapka is still somewhat of a man of mystery. He only just turned 22 (Phillips is two years older) and is coming off a decent season with Liberec Bili Tygri HC over in Czechia, but his USHL stats weren’t anything to write home about. We’ve seen rugged wingers impress in short spurts during their first camps before struggling to maintain that level over full professional regular seasons — Walker Duehr and Eetu Tuulola come to mind.
Advertisement
Ad
Advertisement
Ad
For now, however, Klapka is doing all he can to make a positive impression on the Flames’ top dogs. He wasn’t quite as effective in the split-squad game against Vancouver — certainly not to the same extent as Phillips — but his one shot of the evening came at a pivotal time, almost beating Silovs in overtime.

Klapka with a nice chance in OT. NOBODY CAN STOP THE KLAP! pic.twitter.com/PUc2TlZTzp

Klapka also dropped the gloves with Canucks enforcer Vincent Arseneau, although the much taller Czech was out of his element against the more experienced veteran pugilist.
Still, there’s something to be said for being ready and willing to go … right?

Klapka is doing everything he can to get noticed by Flames coaches and management this preseason. pic.twitter.com/jju8yt051f

Advertisement
Ad
Advertisement
Ad
Phillips and Klapka embody very different approaches to the game of hockey. The former uses his lack of size to his advantage, pivoting on a dime thanks to his low centre of gravity and making dizzying plays with the puck look easy. Phillips was the highest-scoring U24 player in the entire AHL last season and was the key offensive driver on a Calder Cup contender.
Klapka is, in theory, better suited to a fourth-line role. His track record is much less certain, but he’s been surprisingly effective and consistent throughout camp. He almost certainly doesn’t possess comparable offensive ability to Phillips, but he’s not a bad skater for being 6’8″ and it wouldn’t be a huge surprise if he ended up more effective than Brett Ritchie and/or Kevin Rooney in a depth role.
Advertisement
Ad
Advertisement
Ad
The Flames only have so many spots open in their lineup. Barring unforeseen circumstances, Jonathan Huberdeau, Elias Lindholm, Andrew Mangiapane, Nazem Kadri, Tyler Toffoli, Blake Coleman, Mikael Backlund, Dillon Dube, Milan Lucic, and Trevor Lewis will all make this team. (Rooney is probably a shoo-in, too).
But things can change. Injuries do happen. Sonny Milano, Brett Ritchie, and Cody Eakin are all vying for jobs, but there aren’t any guarantees with them. Phillips and Klapka may be prospects with one NHL game between the two of them, but they’re also not kids. And at this point, they’ve begun to earn the right to be evaluated on an even playing field with their veteran counterparts.
They just need to keep it up.