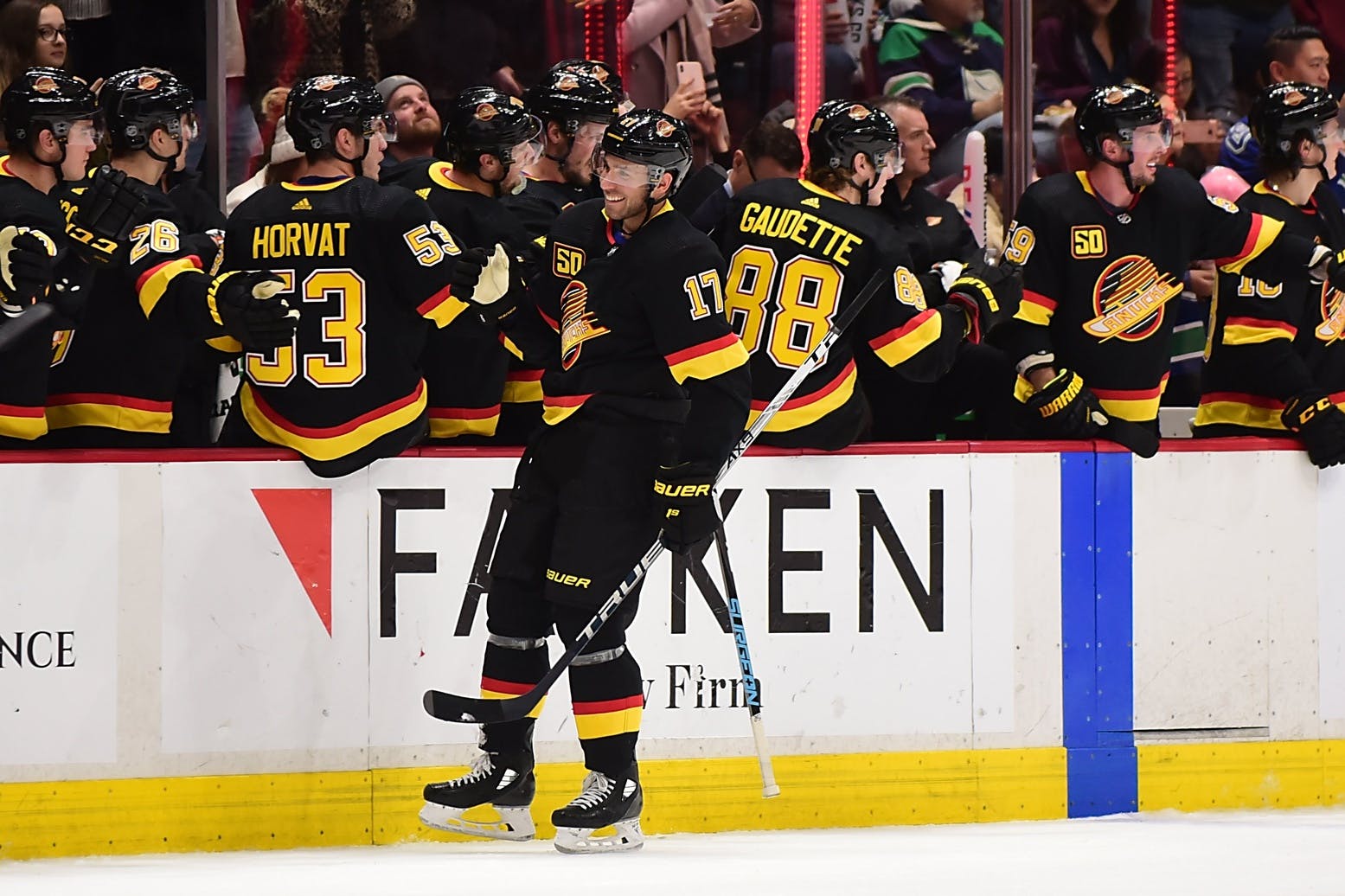 By Prajeya Parmar
1 year ago
After what was statistically his best season at the National Hockey League level, Josh Leivo could have certainly expected a decent pay raise from his previous one year, $1.5 million contract. Unfortunately, due to Covid-19, the Innisfil, Ontario native has seen his pay cut nearly in half, with the Calgary Flames signing the right-handed winger back on Oct. 24 on a one year, $875,000 contract.
Let’s see where the former Canuck fits into the Flames line-up, and whether or not there’s a future for him in Cowtown beyond his one year deal.

How he got here

For someone who’s only played in 169 NHL games, it sure seems like we’ve been hearing about Josh Leivo for a long time. The  6’2, 192-pound winger grew up playing in the Eastern AAA league with the Barrie Jr Colts, before being drafted by the Sudbury Wolves of the OHL in the 11th round. Following a 30 point NHL Draft season with the Wolves, along with 13 points in eight playoff games, the power forward was drafted in the third round, 86th overall by the Toronto Maple Leafs.
Leivo’s tenure with the Maple Leafs was filled with ups and downs, with the right-handed shot continuously yoyo-ing between the NHL and AHL, also being used as press box fodder in his last two seasons with Mike Babcock’s Toronto team. Following up on an earlier made promise, Toronto Maple Leafs general manager Kyle Dubas traded Leivo to the Vancouver Canucks due to the latter wanting to play a bigger role in an NHL lineup.
In both of his two seasons with the Canucks, Leivo set personal bests in both games played and points. The forward saw his role and usage expand tremendously, going from 10:32 in average ice-time with Toronto in the 2018-19 season to 15:57 following his trade to Vancouver. Following an injury-riddled 2019-20 season playing alongside Bo Horvat and Tanner Pearson in Vancouver’s top-six, putting up seven goals and 19 points in 36 games in the process, Leivo signed a one-year deal with the Flames worth $875,000.

Much like a potential Kasperi Kapanen trade, the Leivo signing allows Elias Lindholm to move to his natural center position, giving the Flames coaching staff more flexibility going forward and making the team harder to match up against. This would result in an audition with Johnny Gaudreau and Sean Monahan, two of the most talented line-mates that Leivo will ever have the chance to play with. As a physical right-hand shot with decent offensive tools, he could be a good fit on the top offensive line, also providing Geoff Ward and Co with another option to use on the power play, as the winger has been used as a net-front presence on both Toronto and Vancouver’s PP2 at some point.
* All stats are via HockeyReference and only represent Josh Leivo’s time with the Vancouver Canucks
During his fairly sheltered time with the Canucks, where 56.6% of his even strength zone starts where in the opponents end, Leivo posted career best numbers in goals and points, also coming fifth on the team during the 2019-20 season for CF% and CF% Rel (minimum 20 games played), indicating that the team was possession positive when the right-shooting winger was on the ice. Leivo will be getting a similar top-9 opportunity in Calgary, making the analysis of his numbers with the Canucks vital for assessing where and who he will be playing with in the upcoming season.
Leivo provides the Flames coaching staff with a lot of flexibility, given his right handedness, ability to play either wing, and experience on the power play. Leivo was also relied on many defensive zone starts in Toronto, with 54.9% of his zone starts being in the Maples Leafs end of the ice, putting up a CF% of 51.6% in the process, with the two-way nature of his play making him a pseudo-Lindholm.
Leivo is by no means a permanent solution for the number one right winger role. Much like the many others that have auditioned for a role alongside Gaudreau and Monahan, he’s nothing more than a stopgap. With that being said, unlike the majority of his predecessors, Leivo has the tools to compliment the top line and be more than a passenger, allowing Lindholm to centre his own trio, making the Flames even harder to match up against. From the small sample size that is his play with Vancouver, it is evident that when utilized properly, Leivo can be an effective offensive tool. In an elevated role with the Canucks, Leivo put up points at a rate of 0.44 per game over 85 skates. In a 56. game season playing in the Calgary Flames’ top-9, 10 goals and 25 points is a fairly reasonable feat for the Innisfil, Ontario native to achieve. Whether or not this goal is met, his deal has very low risk; with Leivo potentially being the bargain of the season.