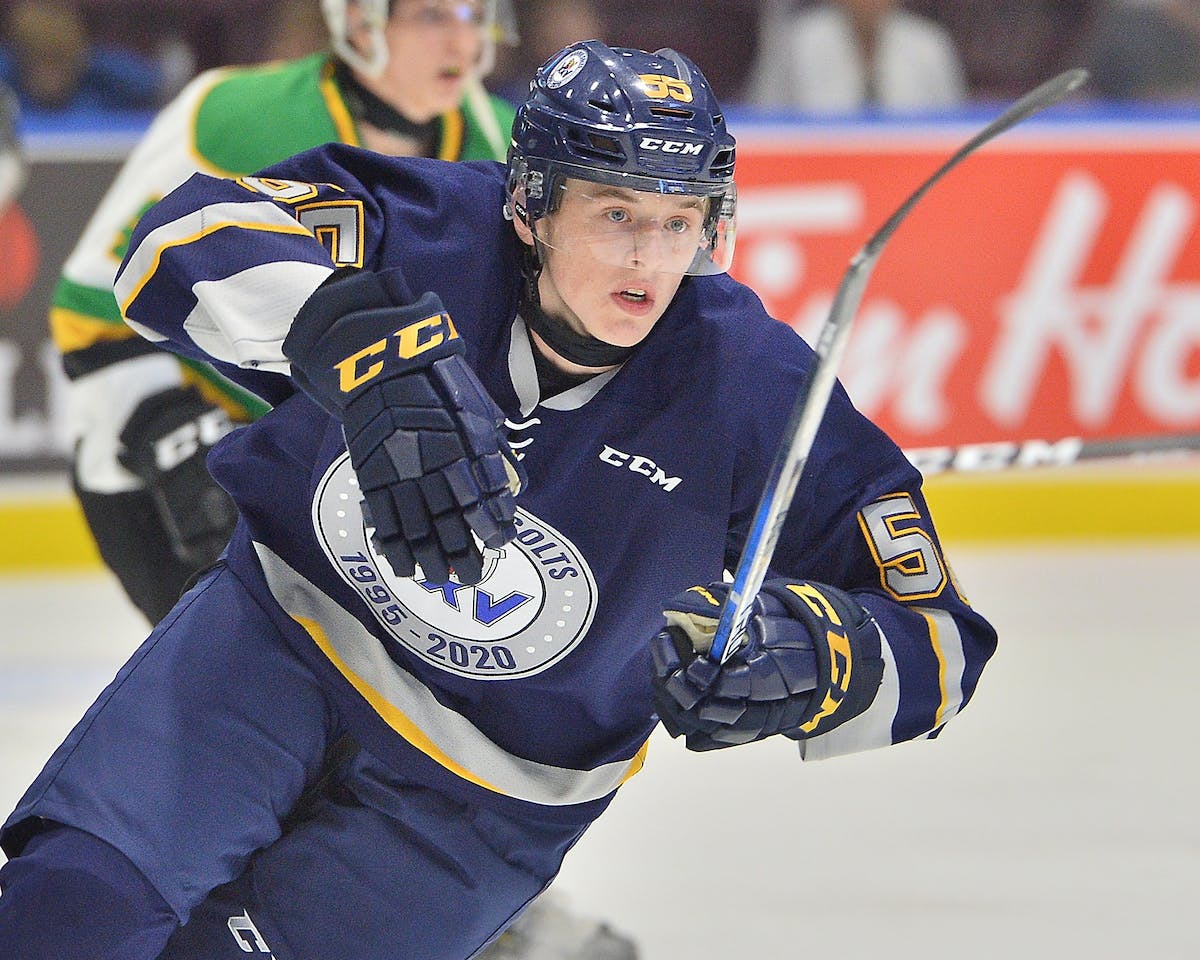 By Ryan Pike
1 year ago
The first round of the 2021 NHL Draft will take place on July 23. Following the results of the draft lottery, the Flames hold the 12th overall selection and will have a chance to add a high-end prospect to their organization.
Up next, an Ontario Hockey League standout that spent the past season in scenic Slovakia: defenseman Brandt Clarke.

The younger brother of New Jersey Devils prospect Graeme Clarke, Brandt Clarke is a 6’2″, 190 pound right shot defenseman. A February 2003-born product of the Ottawa area, he’s worked his way up through local minor hockey and his North American rights sit with the Ottawa 67’s – Sean Monahan’s old team.
But because the OHL was shuttered this season for COVID reasons, Clarke did something interesting to stay active this past season: he went to Slovakia, playing in the same league as Flames prospect Martin Pospisil. (Pospisil left mid-way through the season to go play in the AHL, while Clarke stuck around all season.)
Over at Smaht Scouting, Josh Tessler explained how good Clarke is in his own end:

In the defensive zone when defending the cycle, Clarke tends to either sit net-front or play a tight game along the corners. By sitting net-front, Clarke uses his elite gap control to limit the amount of high danger opportunities. He sits right at the crease to minimize lanes for his opponents and adds a secondary shield for his goaltender. As I said, he will alternate from net-front to the corners and when he is on the corners, he plays you man-on-man and puts pressure on you. The pressure that he puts on you is overwhelming and in most cases leads to the cycle dying.

Over at FC Hockey (buy their guide here!), Joseph Aleong broke down what made Clarke so effective playing against grown men in Slovkia’s Tipsport Liga:

Clarke is a strong skater with excellent edgework and power through his strides. His legs splay slightly outwards in his stride, but his overall form and extension he gets on his strides is very good for his age. His foot speed is an area of improvement, but he excels at jumping into the rush and does a good job picking his spots to minimize risk. He is very confident with the puck on his stick, skating it through the neutral zone in transition with purpose and showing good management of his speed and balance to find open patches of ice to make zone entries. He showed good decision-making under pressure, making quick plays to beat forecheckers and using his feet to escape pressure. Makes a strong first pass and is very aggressive trying to find wingers pushing the pace of play at the offensive blue line. His poise is apparent in the offensive zone, using subtle fakes and deception to open space for his teammates. His vision from the point on the power play was impressive in this game, generating multiple dangerous chances by moving laterally to open passing lanes. His aggressiveness can get him caught deep in the offensive zone at times, leaving a forward back to cover counterattacks. He has solid awareness when defending in his own zone, but is still learning to pick and choose when to pressure his man with body contact or simply use his long reach. Clarke’s acceleration and overall strength in puck battles is still a long way from the top levels, but he has the brain and puck skills to eventually contribute as an all-situations defender in the NHL.

It’s tough to figure out how much Clarke has progressed from his 16-year-old season with Barrie because (a) he played zero OHL games as a 17-year-old and (b) he played in Slovakia, which doesn’t tend to produce a ton of high-end NHL prospects. But as a 17-year-old playing against grown men, he produced offensively and didn’t get his doors blown off defensively. In the context of the weird past hockey season, that’s a massive win. (And his willingness to head overseas to play somewhere so different speaks to his drive and determination.)
Clarke is considered one of the top defensemen in the 2021 draft class, in the mix with Luke Hughes and Simon Edvinsson as the best non-Owen Power blueliner available.

Playing for Barrie in the OHL in 2019-20, Clarke had 38 points in 57 games. That was good for fourth among all under-17 players in the OHL (and top among U17 defensemen), behind only Shane Wright, Mason McTavish and Francesco Pinelli. He was 19th among all defensemen (of any age) in scoring. (2020 Flames draft pick Ilya Solovyov, who’s three years older than Clarke, had two more points than he did.)
Playing for HC Nove Zamsky of Slovakia’s Tipsport Liga in 2020-21, Clarke had 15 points in 26 games. He was second among all under-18 players in points and was first on a per-game basis. He was tied for 26th among all defenders in points, and ninth among those who played 20+ games in points-per-game.
Long story short: he was a superb OHLer as a 16-year-old, and he was an pretty good pro as a 17-year-old… albeit in a league that doesn’t produce much in the way of impressive NHL talent.

If the Flames were going to build a defenseman in a lab, Clarke would be pretty close to what they’d try to produce. He’s driven. He’s smart. He’s good in all three zones. He can move the puck. He shoots right. He’s already shown he can adapt to pro hockey.
Unfortunately for the Flames, it really doesn’t look like he’ll be around when the Flames select at 12th. Here’s a glance at where he lands on various rankings:
McKeen’s Hockey — 6th
Future Considerations — 2nd
The Athletic (Corey Pronman) — 8th
Dobber Prospects — 5th
TSN (Bob McKenzie) — 6th
Draft Prospects Hockey — 2nd
NHL Central Scouting (North American Skaters) — 7th
Recruit Scouting — 3rd
EliteProspects.com — 4th
Smaht Scouting — 5th
In the best-case scenario here, Clarke is gone by 8th overall. It seems pretty likely that he might be gone by 5th overall, too. Either way, he’s a great prospect but probably isn’t a realistic option for the Flames at 12th overall.