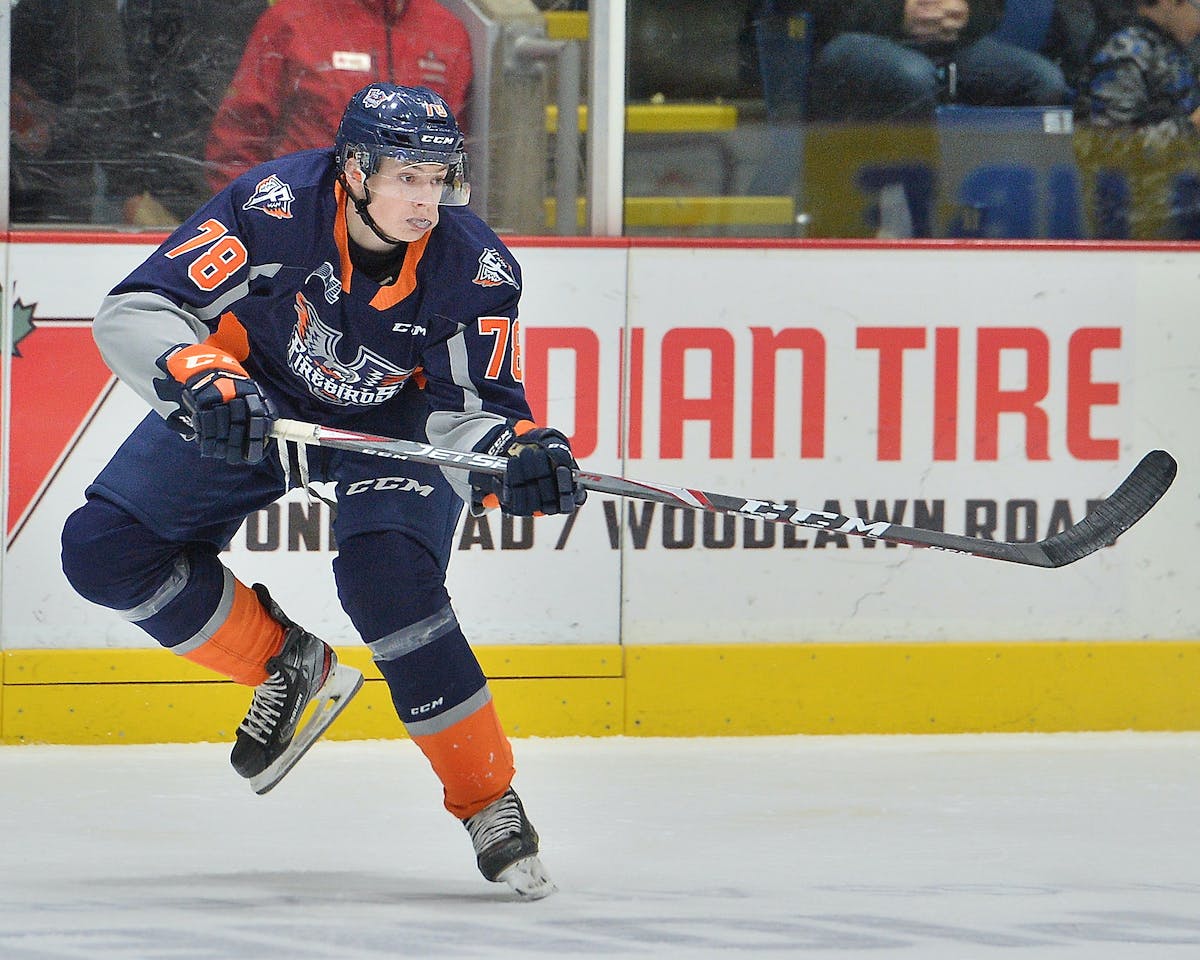 By Shane Stevenson
1 year ago
The first round of the 2021 NHL Draft will take place on July 23. Following the results of the draft lottery, the Flames hold the 12th overall selection and will have a chance to add a high-end prospect to their organization.
A gritty LW that spent last year playing in a Swiss League, and has his North American playing rights owned by the OHL’s Flint Firebirds, today we profile the 6’0” 173lbs Brennan Othmann.

Othmann is most certainly a player that needs some extra time to develop. His hockey IQ is up there in regards to proper positioning, but he needs to work with some skills coaches to round out the rougher edges of his game. Othmann’s the type of player that’s not scared to dump the puck into the corner and race after it. His puck control and his shot need work as well as his ability to gain some more speed in his stride.
You might look at that and wonder “well why would anybody be interested in him then?” It’s because he’s a tremendous complimentary player. He’s not the type of guy that’s gonna turn into an Auston Matthews or even a Brad Marchand, but even successful teams need their Alex Killorn and Carl Hagelin types. Josh Tessler – the founder of Smaht Scouting – had this to say of him:

…when I watched Othmann in anticipation of writing this report, I noticed just how much he reminded of former Dallas Stars winger Brenden Morrow. Morrow was not the biggest skater on the ice, but he was a strong-willed power forward that had a knack for always finding the right spot in the offensive zone.

Othmann may not be the guy that gets onto the highlight reels every night, but he’s the guy that’s willing to do the dirty work to put star players in a position to score goals.

His rookie year in the OHL wasn’t elite, but it was a great first step in getting noticed. Othmann put up 17 goals – 16 assists – 33 points all in 55 games played. It would have been a treat to see how he could have improved playing on other elite talent in the Firebirds system, but unfortunately COVID changed the plans of many young men playing in the OHL – including Othmann. Lucky for him he also has Swiss citizenship so for his draft year he went over to Switzerland and suited up for the EHC Olten.
In 34 games played Brennan was able to put 7 goals in and tally up 9 assists for 16 points. He also amassed 64 PIMs which speaks to both his grittiness and the fact he needs to work on his skating. It was nice to have the option to go and play in a more advanced league against older competition and Othmamm didn’t sink he indeed swam.
Othmann has also been a mainstay on Team Canada teams the last couple years. In 2019-20 he suited up for the Team Canada U17 team – he played 5 games earning himself 3 goals and 3 assists for 6 points. Unfortunately in that Tournament Canada was eliminated in the quarterfinals. In 2020-21 Brennan suited up for Team Canada’s U18 team, playing in 7 games – scoring 3 goals and adding 3 assists – oh and he got the Gold Medal too.

Based on reports it would seem Othmann will almost certainly be available to the Flames at 12 – but I believe it’s unlikely he’s taken. Othmann would be a decent option should the Flames do what they did last year – trading down later in the first round while amassing more quality picks. Should that situation repeat itself it’s possible Othmann could be donning a Flaming C on the 23rd.
The Flames left wing group is pretty good already, with Jakob Pelletier being the number one guy in line to earn a promotion and having Johnny Gaudreau and Matthew Tkachuk not about to lose their spots. Othmann definitely has some work to do and isn’t a threat to take anyone’s spot immediately – if he’s the best player available when the Flames hit the podium they could select and let him develop, but I digress it probably only happens if they trade down in the draft.
McKeen’s Hockey — 22nd
Future Considerations — 22nd
The Athletic (Corey Pronman) — 21st
Dobber Prospects — 20th
TSN (Bob McKenzie) — 16th
Draft Prospects Hockey — 25th
NHL Central Scouting (North American Skaters) — 8th
Recruit Scouting — 29th
EliteProspects.com — 21st
Smaht Scouting — 25th