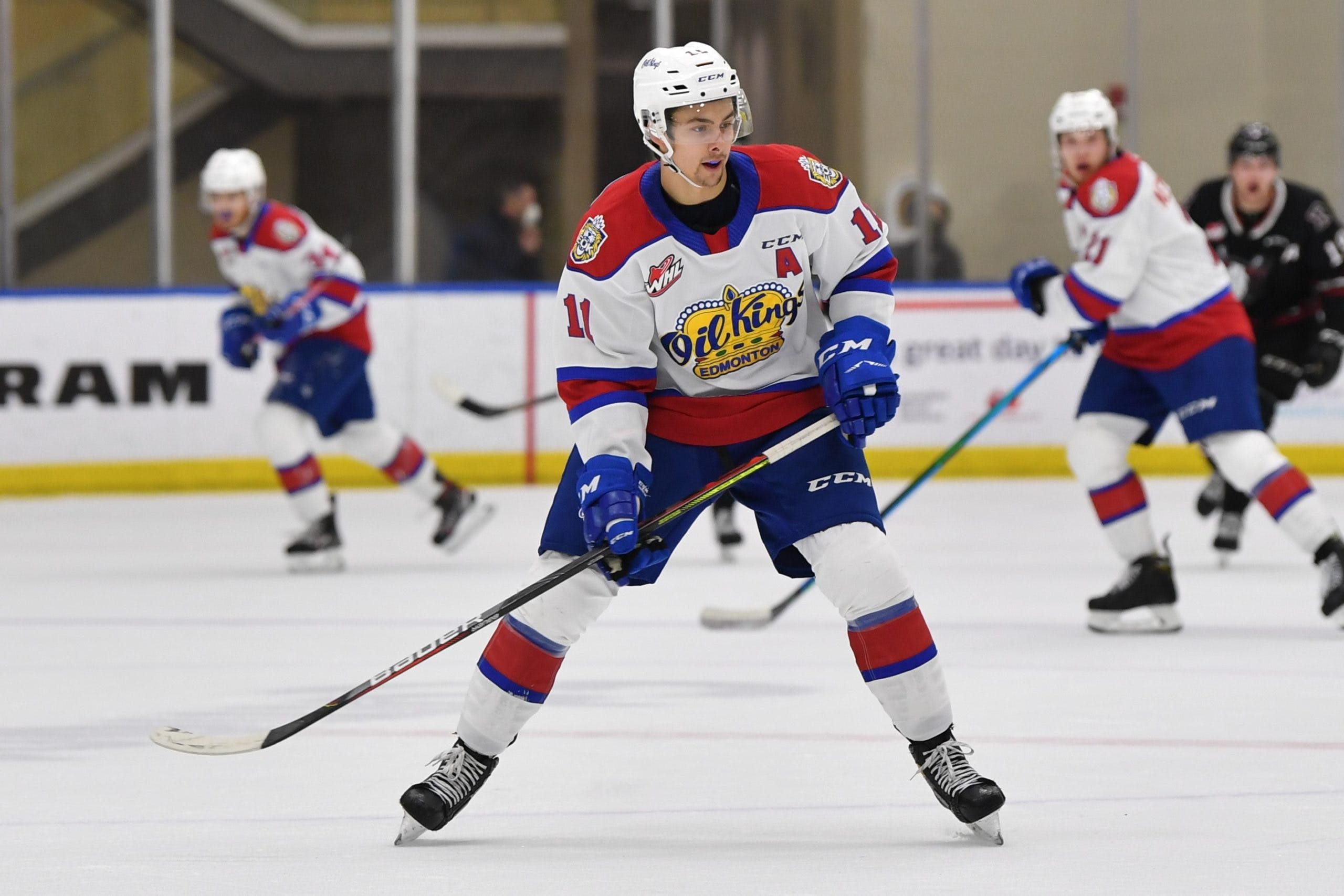 By Ryan Pike
1 year ago
The first round of the 2021 NHL Draft will take place on July 23. Following the results of the draft lottery, the Flames hold the 12th overall selection and will have a chance to add a high-end prospect to their organization.
Next up in our series is a player that Calgary is undoubtedly very familiar with, because he plays just up Highway 2 in Edmonton: Oil Kings right wing Dylan Guenther – a player that might be everything the Flames want and need in a forward, but will probably be selected well before they head to the (virtual) podium at 12th overall.

Born in Edmonton and a product of their minor hockey system, Guenther is a right shot winger that can play either side of the ice but is primarily used on the right side. He was the top pick in the 2018 WHL Bantam Draft by his hometown team and joined the Oil Kings full-time in 2019-20, winning the WHL’s rookie of the year award with a highly productive season. He played much of the 2020-21 season with the Oil Kings, though he played a spell with the AJHL’s Sherwood Park Crusaders as he awaited the WHL restart and also spent time with Team Canada at the World Under-18s.
Oil Kings head coach Brad Lauer basically used Guenther as Mr. Everything: he played big minutes in every situation – power play, penalty kill, and key match-ups at five-on-five. He performed fairly well, consistently creating offense and performing effectively on the defensive side, too. His bread and butter is in the neutral and offensive zones, but he’s far from a defensive slouch.
Stylistically, Guenther can be thought of as a bigger, more-skilled version of Andrew Mangiapane. He plays with a high motor and really good attention to detail, and his success on the ice comes honestly – he generally can be relied upon to out-work and out-battle the opposition, then use his skill and smarts to set up his teammates.
Josh Tessler of Smaht Scouting wrote this assessment about Guenther’s game:

If you select Guenther at the 2021 NHL Draft, you are acquiring an outstanding playmaking winger, who possesses the ability to read defensive formations with ease and adjust on the fly. In one of his few games with the Sherwood Park Crusaders, I noticed Guenther implementing a pick and roll like strategy at the blue-line, which allowed his teammate and puck carrier Savoie to skate to the right of Guenther. Guenther used the pick and roll to distract the attackers. He pulled the attackers to him and opened up wide lanes on the right side for Savoie to exploit. He will also draw attackers towards him and flip a pass behind his back to a teammate.

Guenther’s two-way game is a significant part of his overall skill set, but he has taken it to another level now that he has a thicker frame and is a year wiser. He is hyper-aggressive off the puck and will apply in-your-face pressure using an active stick, hard shoves, and rapid directional changes that allow him to harass either a mobile or static puck carrier. Guenther also is one of the more active penalty killers you’ll find within the 2003 age group, as he constantly pressures the points and finishes his checks along the half wall. His desire to make life difficult for an opponent is quite strong and it’s blatantly obvious why coaches at multiple levels of competition have used him for the penalty kill or during late/close situations. Another testament to his maturity is how he can show a nasty or gritty side while staying within the rule book — Guenther’s totaled only 24 penalty minutes in nearly 80 WHL games. Although Guenther’s zeal off the puck can lead to occasional overcommitments or lapses in coverage, any coach would gladly welcome his efforts and the mostly positive results that go along with them.

Simply put: Guenther is really good at hockey. He’s the type of player that wouldn’t need to change up his game very much to succeed as a pro, as his style and tools would transition really nicely to the next level. He’d just need to add a bit of muscle to help battling in the corners.

In his rookie season in the WHL, Guenther had 26 goals and 59 points in 58 games. That placed him seventh in the league among U18 skaters, behind 2020 NHL Draft first round picks Seth Jarvis, Jake Neighbours and Ozzy Wiesblatt, and Ridly Greig, Ryder Korczak and Kyle Crnkovic. His performance was good enough to capture the WHL’s rookie of the year award. Among all WHLers, he was 32nd in even strength points and goals.
This past season, Guenther played just 12 games and had 12 goals and 24 points. He was second behind 2023 NHL Draft mega-prospect Connor Bedard in U18 scoring – and actually beat Bedard on a per-game basis. He had 18 even strength points in 12 games, good for 15th overall and the best in the WHL on a per-game basis. His 10 even strength goals in 12 games tied him for fifth overall, behind only Cole Fonstad, Keltie Jeri-Leon, Lynden McCallum and Jaylen Luypen – and they all played more games.
At the World U-18s, Guenther was highly effective for Canada. He had four goals and seven points in seven games as Canada captured a gold medal.

For years, the Flames have had the issues that their big players aren’t highly skilled and their highly skilled players aren’t particularly big. Guenther isn’t a huge physical presence, but he’s a player that can play in every situation and bring smarts and skill to the table in large quantities. It also helps that he’s a right shot winger, something the Flames have very few of in the organization.
The challenge is that the things that make Guenther highly appealing to the Flames also make him highly appealing to the 11 teams drafting ahead of them.
Here’s a snapshot of where the major draft evaluators have Guenther relative to the rest of the 2021 class:
McKeen’s Hockey — 7th
Future Considerations — 8th
Sportsnet (Sam Cosentino) — 4th
The Athletic (Corey Pronman) — 2nd
Dobber Prospects — 12th
TSN (Bob McKenzie) — 2nd
Draft Prospects Hockey — 5th
NHL Central Scouting (North American Skaters) — 5th
Recruit Scouting — 10th
EliteProspects.com — 6th
Smaht Scouting — 8th
It seems super unlikely that he’ll be available at 12th overall. If he tumbles a bit, though, perhaps it might be worth exploring a trade-up scenario to grab him.