By Craig Petter
1 year ago
Fourteen games marks precisely one quarter of an abbreviated and afflicted pandemic season, so we humble scribes at FlamesNation figured it would be appropriate to start examining individual Calgary Flames player production paces.
Each player has established scoring patterns so far hinting at ultimate trajectories that we can situate as chapters within their broader career stories. Naturally, 14 games alone are a small sample size, and extrapolating from basic offensive stats is pretty crude mathematics—so we will be revisiting these trajectories every fourteen games as the season unravels to see whose initial numbers were bloated or bludgeoned by luck and limitations.
Below lie the projected goal, assistant and point totals this season for every Flames skater who has dressed 11 games or more—nullifying numbers skewed by a single point in few games (the Byron Froese Factor) and forgiving a currently injured Derek Ryan. The projections operate under the assumption that anyone who has missed games within the first 14 games plays out the rest un-disrupted—so, for example, we foreshadow Dillon Dube’s pace over 53 games and not a full 56 to account for the three he missed while injured. We also translated the current rates for each player to equivalent totals for a hypothetical standard-NHL-season-length parallel universe, which clarifies how their 2021 paces fit alongside what they accomplished in those sunny years before the apocalypse.
Finally, we classify every player’s projected totals by the type of season the first 14 games suggest they mount this year compared with their own unique previous outings. Whether their numbers portend a particularly ‘Rollicking’ season, a fairly ‘Routine’ season or an admittedly ‘Rougher’ season than previous years totally depends on reasonable, rational expectations for individual players pulled exclusively from their own tangible, quantifiable past outputs. Like golfers and bowlers and single-player MarioKart racers, players are competing against their own scores for this exercise.
Alright—caveats concluded. Pedal, metal. 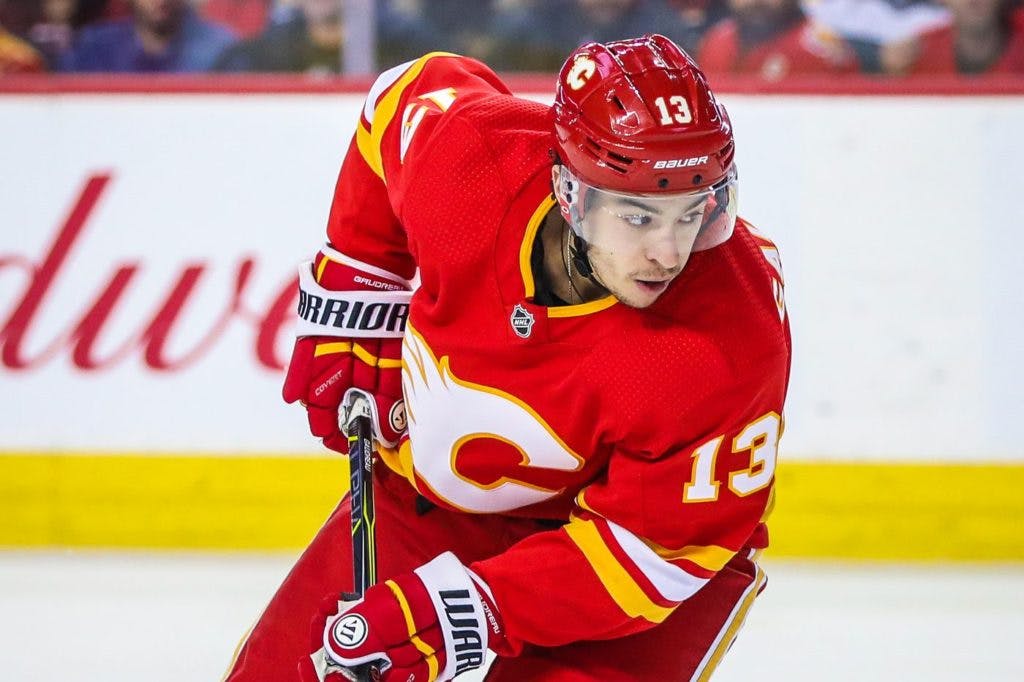 Johnny Gaudreau – 32 G, 28 A, 60 P (82-game equivalent: 47 G, 41 A, 88 P)
Reviving the gutsy, glossy, confident Johnny Hockey on-ice persona that was hibernating last season has come with its rewards. Gaudreau is scoring gorgeous goals and shipping pretty passes through fourteen games at over a point-per-game clip. The 60-point threshold might be the divider between stars and superstars this year, but Gaudreau seems slated to crack it. In a normal season, he would be projected to obliterate his previous career-high in goals and post his second-highest single-season smorgasbord of points, too.
Elias Lindholm – 16 G, 40 A, 56 P (82-game equivalent: 23 G, 59 A, 82 P)
Perhaps the steadiest forward on the Flames over these past three wobbling whirlwinds of hockey seasons, Lindholm has maintained a point-per-game pace this year that would eclipse career-highs in a normal one. Even with the shortened schedule though, Lindholm is surging towards the second-highest assist total of his career at his current rate. The 1C role is treating him beautifully.
Andrew Mangiapane – 16 G, 12 A, 28 P (82-game equivalent: 23 G, 18 A, 41 P)
Hurtling towards a 28-point showcase in a 56-game campaign, Mangiapane has been chowing down on every spare bone tossed his way despite his third-line confinement like the absolute pit bull of a hockey player he is. For the mathematically disinclined, that’s half a point per game—beyond respectable for a youngster in his third season who only really started potting points in the latter half of this first quarter of the season. He’s doubtlessly the second-eighth of the season MVP for the Flames.
Dillon Dube – 10 G, 14 A, 24 P (79-game equivalent: 14 G, 22 A, 36 P)
The first 11 games have not transpired without turbulence for the sophomore winger, whose rear end and the bench have enjoyed a couple extended embraces so far. But even when he betrays his age on the ice, Dube has proven the capacity to blast his way to redemption through one-timers. His offensive pace is already building on last year, and once he levels out his consistency, Dube should flourish and possibly pass the half a point per game marker in his second season.
Rasmus Andersson – 8 G, 20 A, 28 P (82-game equivalent: 12 G, 29 A, 41 P)
Promoted to a top-pair role with the off-season departure of TJ Brodie, Andersson has exploited his elevated minutes and first-unit power play opportunities to carve the best offensive trends of his young career so far. Squished schedule included, Andersson is poised to produce higher goals, assists and points totals than he managed in any of his previous full (or near-full) seasons. He’s still green enough to hone and heighten his game as a 24-year-old defenceman, but Andersson is already baring a lofty and valuable offensive skillset.
Juuso Valimaki – 0 G, 20 A, 20 P (82-game equivalent: 0 G, 29 A, 29P)
Now, duh. It’s a little unfair to deem a rookie’s offensive output subpar or underwhelming when he has yet to set a par or even whelm in the first place. Juuso Valimaki is undeniably, unquestionably, unequivocally scoring at the best rate of his NHL career so far, and also the worst, and also the most average etc etc semantics and logic and irony. But among his handful of assists so far he has executed some absolutely phenomenal passes, has betrayed some incredible vision from the blue line. The moment he notches his first goal this season those ugly zeroes will disappear from his projections, and, if he sustains this assists pace, a 20-plus point performance as a fifth defenceman in his Calder-eligible year will be something to celebrate regardless. 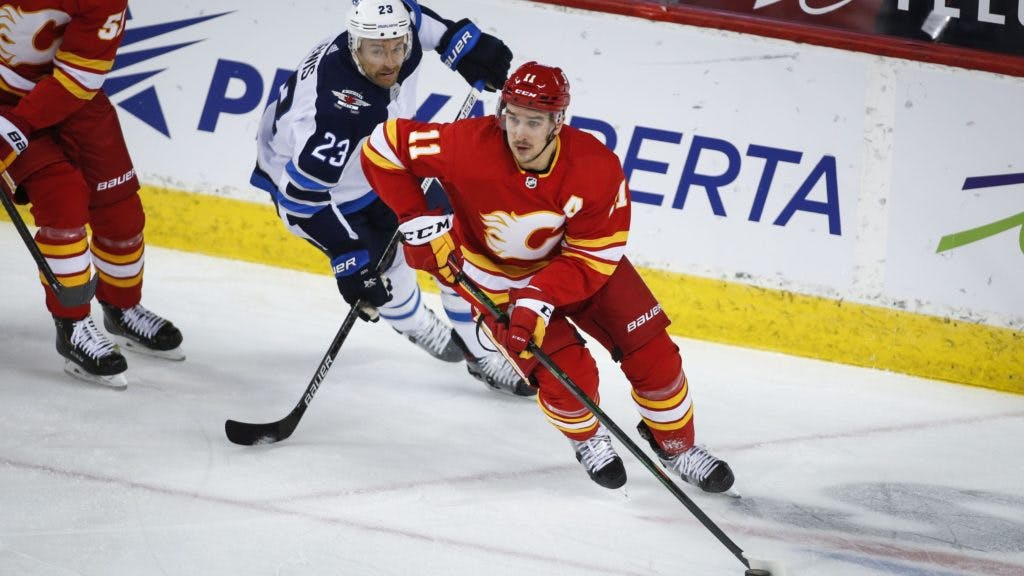 Sean Monahan – 8 G, 36 A, 44 P (82-game equivalent: 12 G, 53 A, 65 P)
The Monahan Metamorphosis™ from garbage-goal glutton to stretch-pass machine has been a startling one. Largely even goal and assist totals defined his first five seasons, yet his playmaking stats have suddenly begun to outweigh the contributions from his own blade we all thought unique to his game. Regardless of from whence his points come, it increasingly appears that Monahan’s 82-point year was the anomaly—his entirely solid and respectable rate through 14 games this season would have him primed for a 65-point outing in a full schedule, which pretty much mirrors his career average.
Matthew Tkachuk – 20 G, 20 A, 40 P (82-game equivalent: 29 G, 29 A, 58 P)
So long as he keeps failing to convert on his between-the-legs flicks from the edge of the crease, Tkachuk will keep producing at a fine but less than fantastic rate. Is it any coincidence that his best years align with those where his goals were often flashy, fancy, flamboyant? Tkachuk has seemingly inherited from Monahan this year the garbage goal crown, though this is by no means an insult. Although he has yet to match his all-star paces from the last two years, Tkachuk is still pushing a point-per-game and it will only take a game or two of unleashed offensive flair to reclaim his former rates.
Mikael Backlund – 12 G, 20 A, 32 P (82-game equivalent: 18 G, 29 A, 47 P)
This projection reflects the whole ‘hypothetical’ element of this article, since Backlund’s injury against the Canucks last game could inhibit a whole 56-game workload from the Swede. Nonetheless, he is cruising at a pace just beyond half a point a game that neatly dovetails into his broader career pattern. Backlund has produced within a strict 47-53 point range for the previous five seasons, and extrapolating a full season from his pace through 14 games slots this season comfortably into his usual repertoire. Even at 31, the man remains reliable at both ends of the ice.
Milan Lucic – 12 G, 12 A, 24 P (82-game equivalent: 18 G, 18 A, 36 P)
A recent roll alongside Backlund and Mangiapane has skyrocketed* Lucic to the best offensive pace since his first season on the Edmonton Oilers. Though nowhere near a sniper, Lucic has stamped a decent string of offensive contributions on the first 14 games of this season, and he deserves credit for that.
*The ‘sky’ in skyrocket is less a sprawling, oceanic prairie-summer blanket than a comparatively low clump of cumulus clouds, since he is still only on track for 24 points and not the Olympic team here, but it’s still impressive for his post-Boston standards.
Mark Giordano – 8 G, 20 A, 28 P (82-game equivalent: 12 G, 29 A, 41 P)
At the tender age of 37, Mark Giordano is still scraping together a half a point per game rate. Though the captain will never replicate his Norris season’s fireworks, his offensive numbers so far this year earn him those heavy minutes and secondary power play chances. Plus, that slapshot remains quite the lethal firearm when it reaches his target.
Chris Tanev – 4 G, 8A, 12 P (82-game equivalent: 6 G, 12 A, 18 P)
No, Chris Tanev will not likely splinter an ongoing five-year streak of two-goal seasons to double that in a shortened season—especially when the sole goal fueling this projection was so freaking absurd.
Though he has darted into the offensive play and even rattled a post or two throughout the first 14 games, Tanev excels elsewhere. A 12-point pace for a 56-game campaign suits his storied shutdown style perfectly. 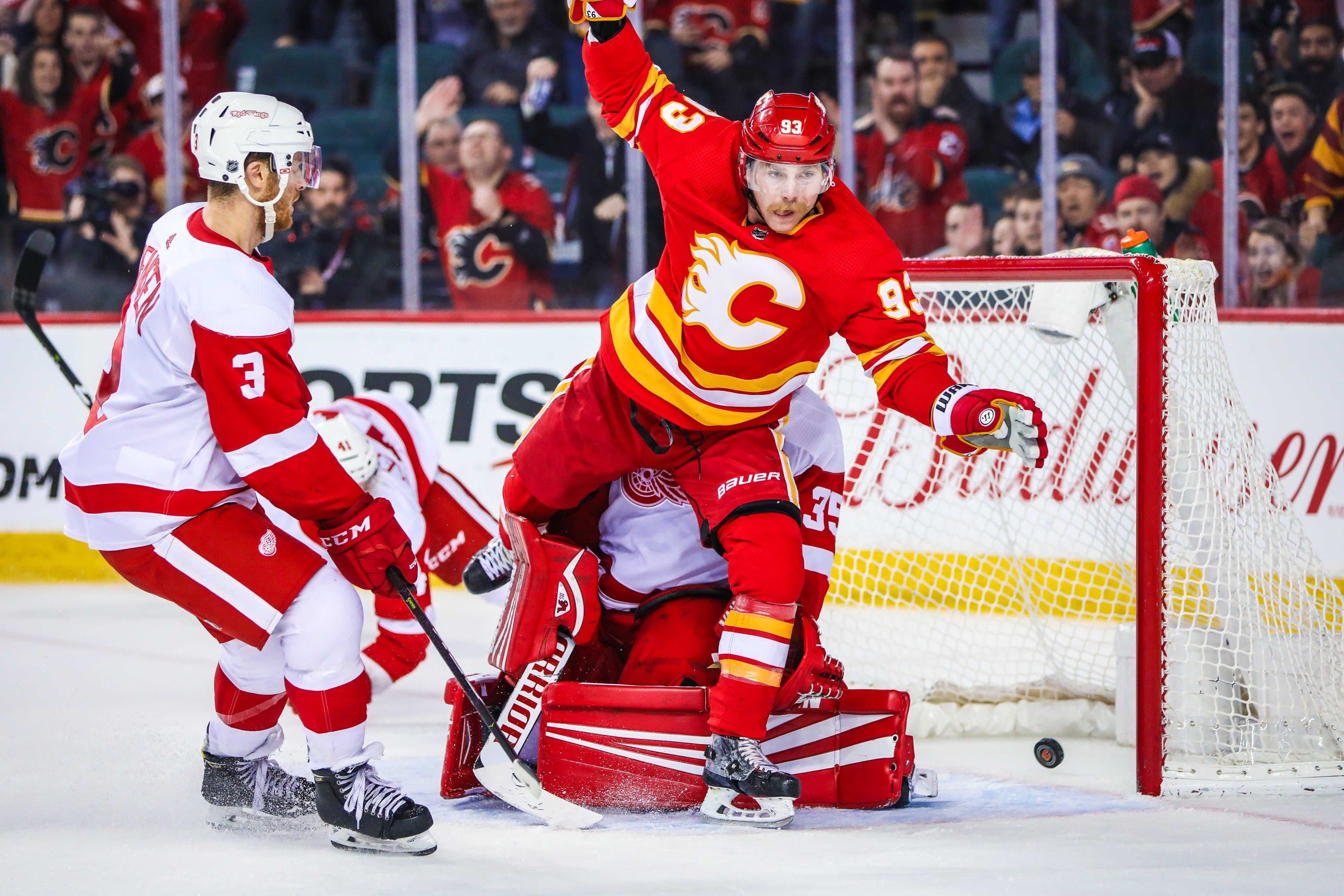 Sam Bennett – 8 G, 4 A, 12 P (81-game equivalent: 12 G, 6 A, 18 P)
Some fans might struggle to recall that Sam Bennett scored nearly 40 points in his rookie season. Over the next three years, he unwaveringly pushed 30 points. But now, his struggles to even really submit a double-digit pace have defined the conversations about him. Barring two goals in his last four games, Bennett suffered quite a discouraging start to the shortened season. Shifts with Gaudreau and Monahan have unlocked those aforementioned goals for him, though, so our midseason update on his point projections could very well be singing a smoother tune.
Josh Leivo – 0 G, 8 A, 8 P (81-game equivalent: 0 G, 12 A, 12 P)
Two points through 14 games was likely not the output envisioned for the winger who started the season beside Monahan and Gaudreau. Leivo has been engaged in a vicious fight with the puck for a month now, pinning him goalless and propelling him towards an offensive season equal to that of a year when he only played 16 NHL games for the Toronto Maple Leafs.
Noah Hanifin – 0 G, 12 A, 12 P (82-game equivalent: 0 G, 18 A, 18 P)
Now, most Flames fans would agree that this offensive regression is a welcome one. Alongside Tanev, Hanifin is playing the most effective and dependable defence of his career. Basically banished are the cringes and shudders that used to notoriously accompany Hanifin playing the puck every few nights. He has adopted a shutdown role deployed against offensive powerhouses and largely met the challenge—so, although he’s producing at the lowest rate of his career so far, should anyone care?
Joakim Nordstrom – 0 G, 0 A, 0 P (80-game equivalent: same)
The Flames were not commissioning goals when they signed Joakim Nordstrom this summer. They hired him for his feet and shoulders and heartrate, not his blade. But is it grossly selfish of Flames fans to request one (1) accidental fluke of a point here and there? A second assist for dumping the puck in the corner for a teammate to pass to another teammate to fling at the defenceman’s skate and watch it ricochet into twine and ignite that elusive red lamp? Once?
Nikita Nesterov – 0 G, 0 A, 0 A (81-game equivalent: same)
From eyewitness testimony alone, Nesterov has deserved his name on a scoresheet through his first 13 games on the Flames. Again, he has been the shutdown defenceman monitoring and mentoring the play of his younger partner—nobody signed him to score. Throughout these 14 games, however, Nesterov has jumped onto rushes and launched shots through traffic and connected long outlet passes and all in all garnered ample chances to log a point. Paraphrasing Field of Dreams: If he dresses, it will come. 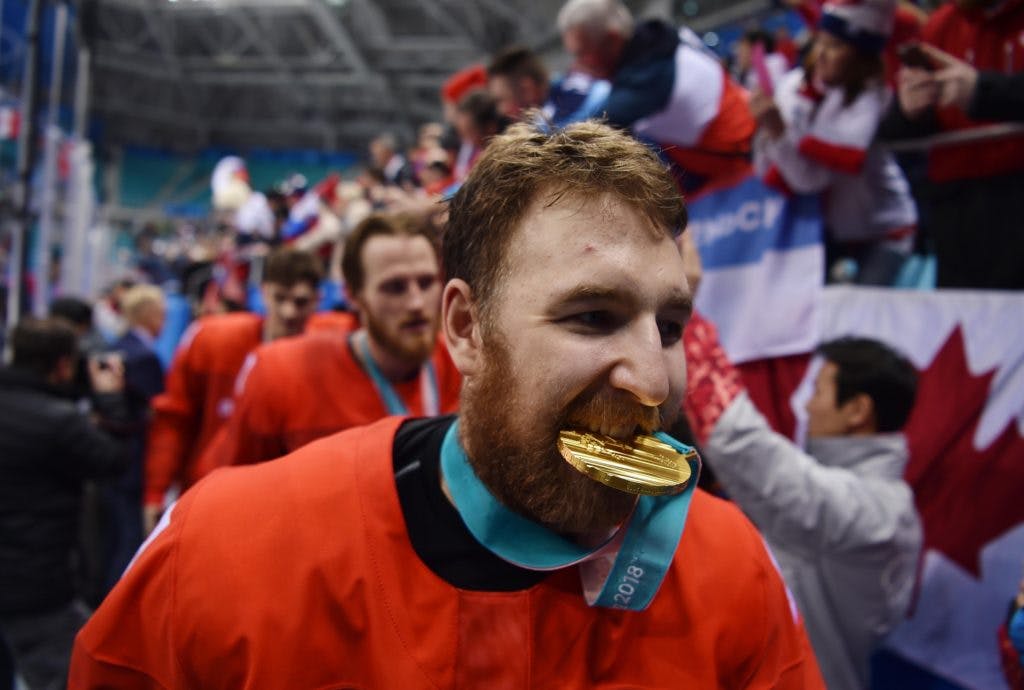 Thus spoke FlamesNation on projected paces for every prominent player this season—an update (and likely reshuffle) on these trajectories will follow in 14 games.
Uncategorized
Recent articles from Craig Petter