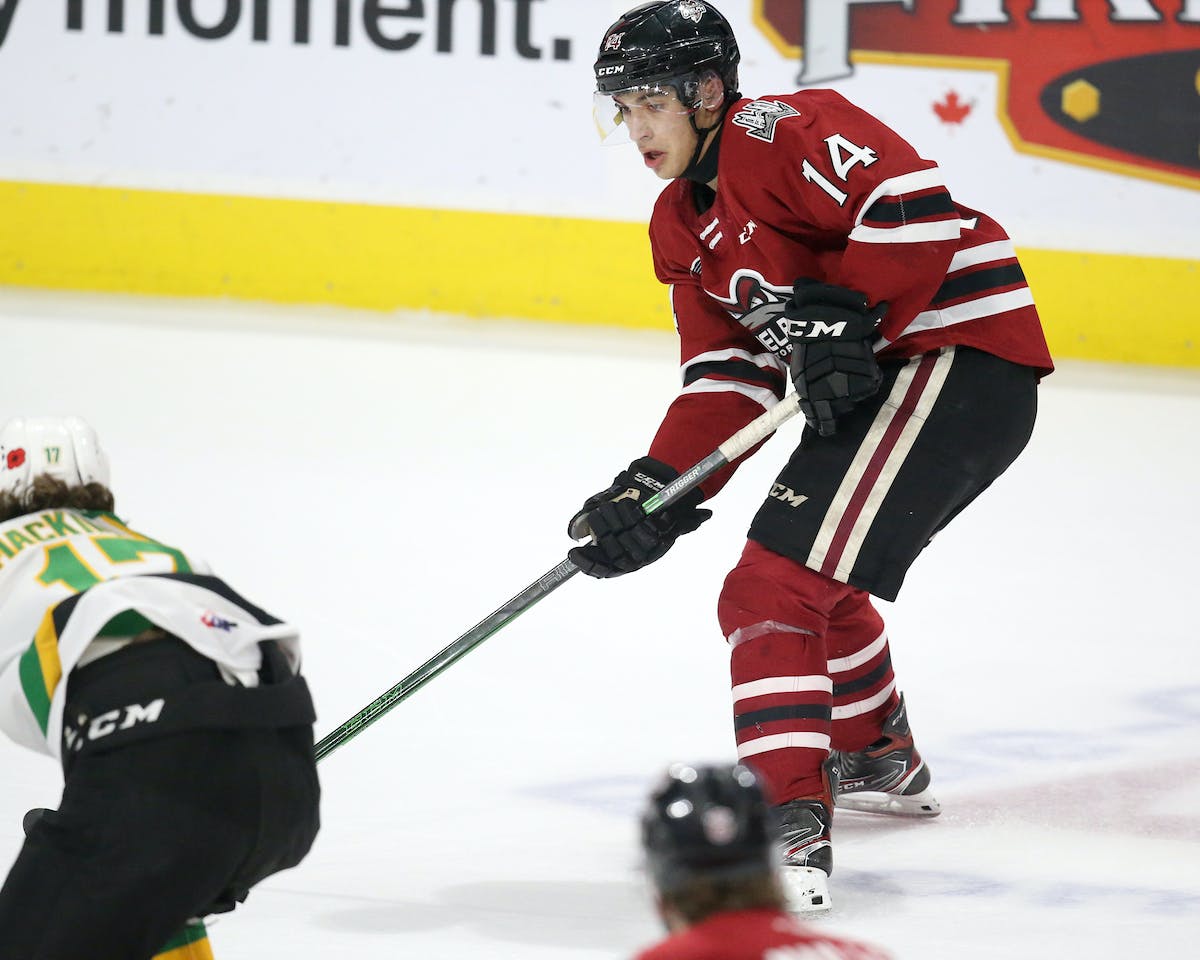 By Ryan Pike
4 months ago
The Calgary Flames have focused on building up the middle, in terms of trying to invest and/or acquire goaltenders, defencemen and centres. Centres in particular have been a focus in recent seasons, with the Flames drafting a ton of them.
Guelph Storm pivot Matthew Poitras could be a very interesting consideration for the Flames at 59th overall.

A product of Brooklin, Ontario – a suburb of Whitby – Poitras is a right shot centre who’s listed at 5’11” and 176 pounds.
Poitras worked his way up through local minor hockey before being selected in the 2020 OHL Draft. As with many others, his OHL debut was delayed due to the pandemic. He played for the Guleph Storm as a rookie in the 2021-22 season.
As part of the OHL Prospect site’s media scout panel, Mat Sheridan of FC Hockey had this to say about Poitras:

Poitras may not have as much offensive flash as some other draft-eligible OHL players but he has many tools that I think will allow him to translate to the pro level. His ability to win the puck back and make the proper reads on the ice stand out. He plays with a quick active stick which allows him to disrupt cycles and break up lanes whenever he is on the ice. Poitras has the ability to draw defenders in and find teammates in the slot, creating high danger scoring chances for his team. While he has some aspects to work on in his game, most notably his skating, I think he’ll make an NHL team happy in the middle rounds of the draft.

Poitras is a hard-working, offensively skilled forward who utilizes his quick hands and vision on both sides of the puck. He has all the requisite offensive tools; a strong release on his wrist shot, good vision and passing ability, and quick hands in traffic, but it’s the pro-level habits already present in his game that will help him excel at the next level. He protects the puck well on the cycle, takes great angles in pursuit, and consistently comes away with contested pucks. Poitras has a habit of baiting opposing players into poor decisions and jumping lanes at the perfect time, routinely capitalizing on mistakes by the other team. He makes strong reads off the puck and competes hard, laying out to block a shot or taking a hit to make a play. He may never put up huge point totals but Poitras does a lot of things well to create chances and drive play for his team. I think he has a pretty safe floor as a top-nine NHL forward and there is potential for him to become more than that.

With 50 points for the Guelph Storm this season, Poitras finished third on the team in points. However, too many times this season I felt like Poitras disappeared a bit into the background of games. He had flashes of higher-end offensive potential, but not often enough to go higher than the third for me.

Poitras has earned praise for his work ethic and awareness, but a lot of scouts seem skeptical of his upside because of his skating.

Poitras had 21 goals and 50 points in 68 games for Guelph. He was third on his team in points and fourth in goals.
League-wide, he was seventh among OHL rookies in points and tied for 11th among rookies in goals.

Poitras is a right shot centre, so you better believe that the Flames would have some interest in him based on their lack of those in their organization.
Poitras will probably be available at 59th overall if the various major draft rankings are to be believed:
Daily Faceoff: 85th
FC Hockey: 45th
Elite Prospects: 78th
TSN (Bob McKenzie): 74th
TSN (Craig Button): 78th
The Athletic (Scott Wheeler): 64th
The Athletic (Corey Pronman): 100th
Smaht Scouting: 75th
He’s a pretty good prospect, but there may be players better suited to the Flames’ needs or with slightly higher upsides available at 59th overall.