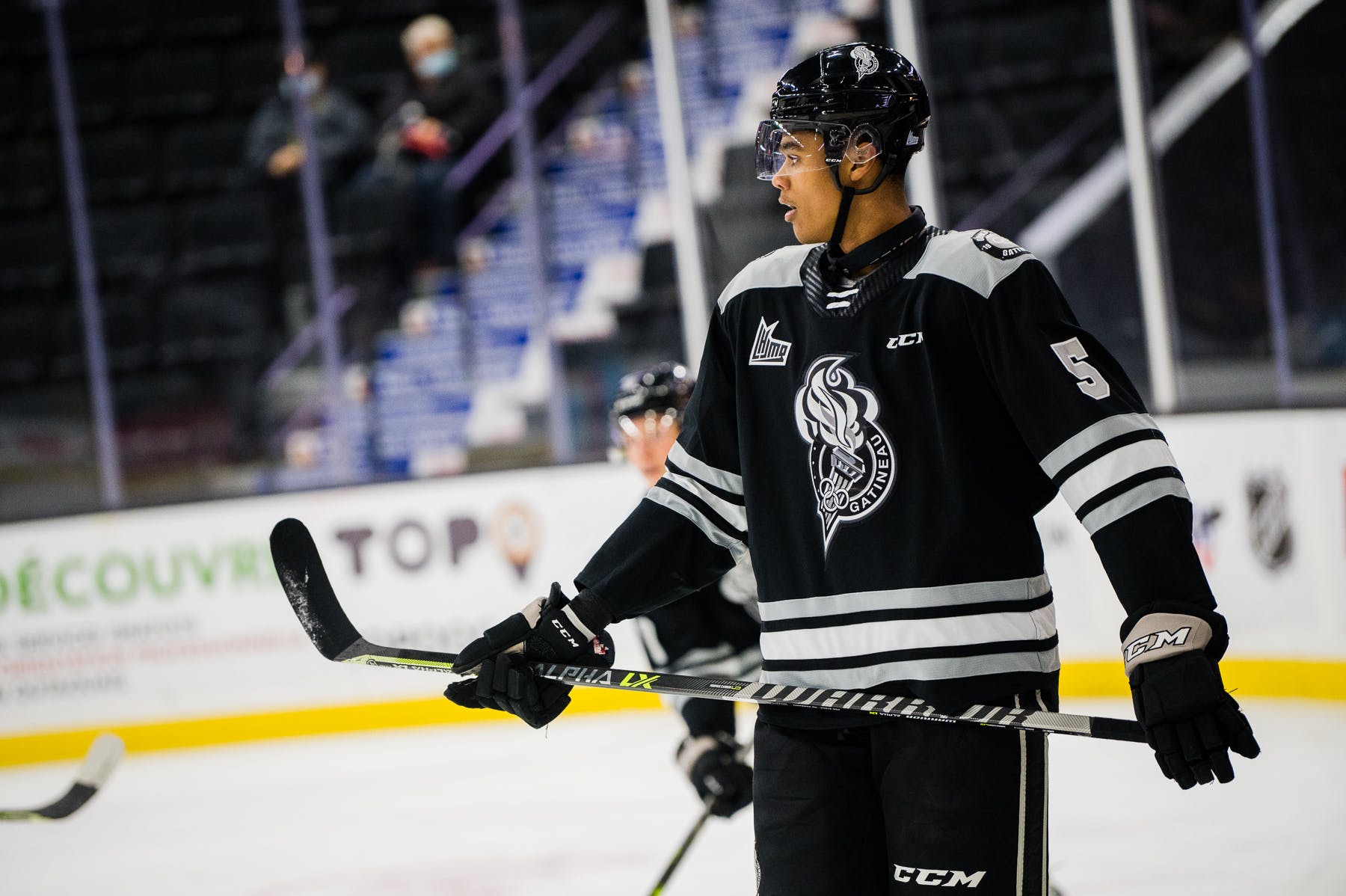 By Colton Davies
6 months ago
The Quebec Major Junior Hockey League is one of three leagues part of the Canadian Hockey League, along with the Western Hockey League and Ontario Hockey League. Over the last decade or so, the Q has been producing elite talent at all levels whether that be goalies, forwards, or defencemen. The Flames have even dipped their hands into the Q in order to bolster their prospect pool in recent years drafting 2022 Memorial Cup champion Jeremie Poirier in 2020, and Jakob Pelletier in the first round of the 2019 NHL Draft.
Another player who would fit the bill here in Calgary perfectly is QMJHL blueliner: Noah Warren

Warren hails from St-Jean-sur-Richelieu, Quebec, and grew up and developed in the Collège Charles-Lemoyne Riverains hockey program. Warren stands a massive 6’5″ 225 lbs and is an imposing figure not only on the ice but off it as well as he is a freak athlete. He was the 8th overall selection in the 2020 QMJHL Entry Draft.
Here’s Scott Wheeler from The Athletic who had Warren ranked 77th on his rankings:

Warren’s size, strength, power, skating combination and rapid progression this season made him a talked-about player as the year went on and caught my eye in trips to Gatineau for an Olympiques game and Kitchener for the CHL/NHL Top Prospects Game. He plays within himself and skates quite well (as evidenced by his strong combine results in Kitchener and the impact his mobility had to funnel play to the exterior in Gatineau). He defends at a very high level and has started to come out of his shell with the puck, even if the latter is never going to be a hallmark of his game. After spending more time watching him on tape than most as I put the finishing touches on this piece, I was also impressed by his stick and the job he does reiterating with opposing carriers. He can step up and play the body but there’s also a quiet calm to the way he matches and keeps opposing players to the outside. If he can develop a little more confidence carrying the puck (which came as the year progressed) in transition and atop the point, the rest of his game should translate.

Gatineau Olympiques head coach and general manager Louis Robitaille had this to say about Warren:

He’s outstanding. He’s on the rise and the credit goes to him. The priority was to really establish who he was going to be at the next level and where he could be used. And it’s quality over quantity. He became a physical, steady-Eddie defenceman on a daily basis. And that’s why his stock is on the rise. Because now his assets are so strong and powerful that now you see the strength of the athlete instead of the weaknesses.

A 6-foot-5, 224-pound behemoth, Warren is strong and physical. He knows how to use his size and has the mobility to defend top forwards well. I just don’t know if there’s enough offense there to believe he can be much more than defensive depth at the next level. That said, his physical attributes are such that you have to list him to see if he can take his game to the next level.

Warren implements solid pressure against the half-wall, will sandwich attackers at the perimeter, but looks to take away lanes to the slot and force the attacker to work the boards when the oppositional rush enters the zone. He will look cut off the rush by throwing his weight. But, he doesn’t just use his weight to suppress pressure off the rush. Warren has strong net-front presence and if someone is looking to park themselves in front, Warren will throw his weight.

Warren is an extremely raw, physical, defensive blueliner who has continued to jump up our board throughout the season thanks to his high-level play and constant progression… The 6-foot-5 prospect is finding his groove as one of the best lockdown defenders in the QMJHL, and, he’s even starting to show more offensive flashes — which has always been the biggest knock on his game.

Warren even chimed in on his game and detailed what he can work on in terms of development:

I’d probably have to say, get faster and better decision-making for the next level. I feel like my decision-making is good for the Q, but the NHL is a way faster league so I’m gonna need to continue to improve on that.

There are a number of reasons to like the package that Warren provides. He is a nasty, and physically dominating defender who is not afraid to use his size to his advantage. He has drawn slight comparisons to New York Rangers’ rugged young blueliner K’Andre Miller. If he can keep on the right developmental path and a team is willing to be patient throughout his tenure, Warren has the ability to be a strong shutdown defender who not only makes a difference in the defensive zone but has offensive traits to sway his game into more of a two-way element.

Warren registered 24 points (5 goals, 24 assists) and 52 penalty minutes in 62 regular-season games this past season. He added one assist in seven playoff games. Warren was also invited to the CHL/NHL Top Prospects Game back in the spring.

Warren is everything that Darryl Sutter loves in a hockey player and it wouldn’t be far-fetched to say that Warren would probably become a monster in the Flames system. Given his physicality and size, he has become a very enticing prospect and unfortunately might not be available when the Flames select at the 59 mark.
Here’s a snapshot of where Warren ranks on various rankings:
Daily Faceoff: 62nd
The Athletic (Scott Wheeler): 77th
Elite Prospects: 56th
FCHockey: 68th
TSN Bob McKenzie: 41st
TSN Craig Button: 38th
Dobber Prospects: 44th
Sportsnet: 32nd
McKeen’s Hockey: 38th