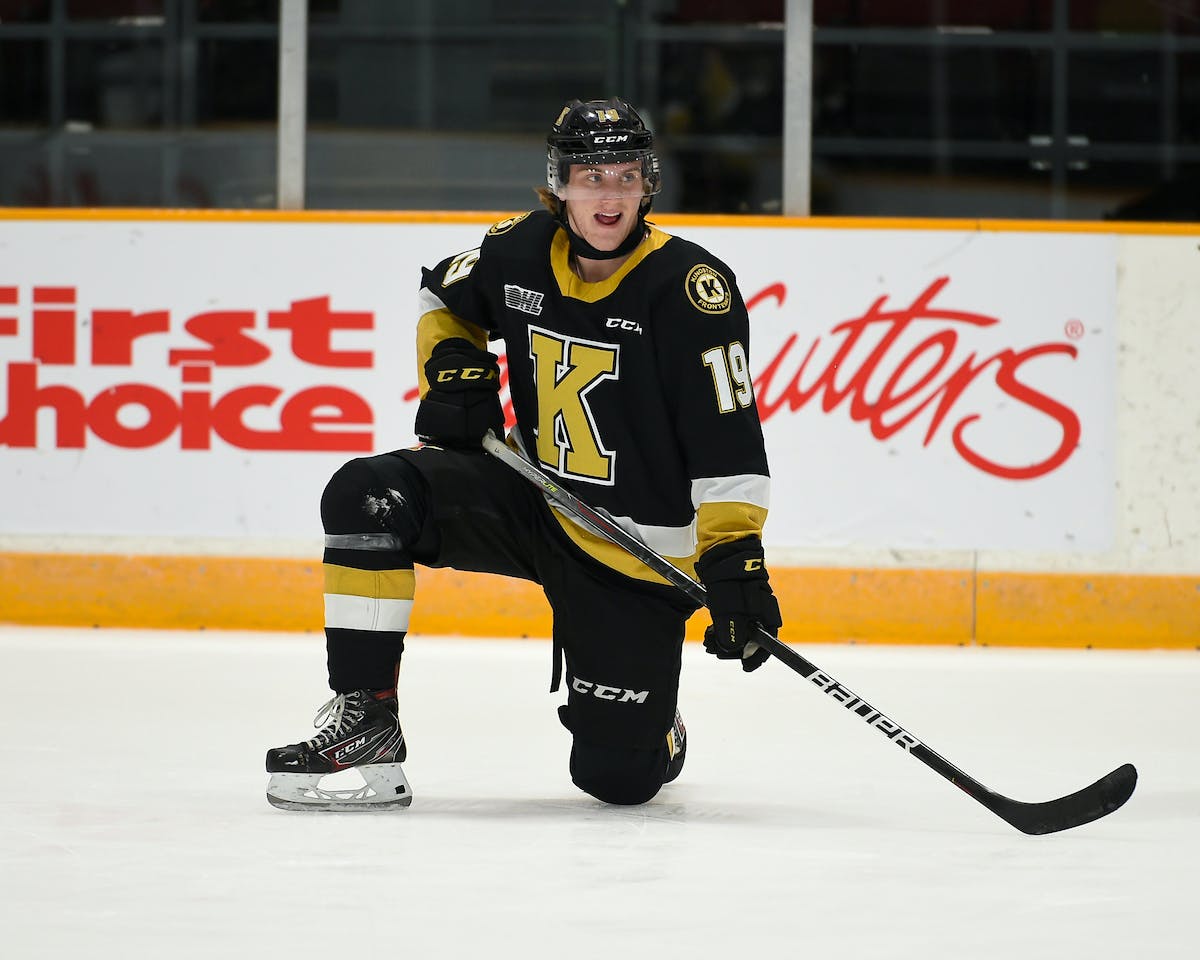 By Ryan Pike
5 months ago
It every draft class, there are a few players sprinkled throughout the rankings that seem to fit a particular team’s needs and preferences to a tee. For the Calgary Flames, a team that likes smart, two-way players who can play with pace, Kingston Frontenacs forward Paul Ludwinski arguably stands out as the most Flamesy forward potentially available at 59th overall.
Let’s discuss what makes Ludwinski such an interesting young player.

Ludwinski hails from Pickering, Ontario – in the Toronto area. He’s a left shot centre listed at 5’11” and 183 pounds.
He came up through various levels of Toronto area minor hockey. He was the fifth overall selection in the 2020 OHL Draft, but his debut was delayed by that dang pandemic. He spent his 17-year-old season (2021-22) as a rookie with Kingston.
Over at Smaht Scouting, Jordan Malette provided this summary of Ludwinski’s game:

If you’re looking for a mix of high energy and puck skills, you’ve come to the right place as Paul Ludwinski is all gas, no brakes. His non-stop energy sets him apart from the pack as he’s constantly motoring around the ice every shift. He applies relentless pursuit and routinely catches the puck carrier, forces a turnover, and begins the transition in the other direction. Ludwinski also has solid puck skills and a strong ability to detect open space and time into that opening as a passing option. His work rate and skills make him an intriguing prospect that offers a safe floor and the upside to be more than just an energy player.

As part of a longer summary at Dobber Prospects, Nick Richard wrote this about Ludwinski:

… Ludwinski is a strong skater with a quick first step that allows him to pressure opposing defenses and force them into rushed decisions, most notably as he hounds pucks on the forecheck. While he can be aggressive in puck pursuit, he makes intelligent reads and doesn’t often take himself out of the play. Though he isn’t the flashiest passer, his intelligence and the speed at which he sees the game make him an effective distributor who can find teammates in space to relieve pressure. Ludwinski is also a responsible defensive player who supports the puck well in all three zones, and he proved to be a threat on the penalty kill for Kingston at times throughout the season. His skill doesn’t jump off the screen and he will need to continue to add strength as he matures, but Ludwinski’s combination of pace and hockey IQ should have him in the running to be selected in the second or third round of the 2022 NHL Draft.

Brock Otten of OHL Prospects, as part of their media scouting panel, had this succinct summary regarding Ludwinski:

His strong finish to the year really impressed me. It was if he finally figured out how to use his speed to be a consistent offensive player. Additionally, it seemed like he was more relaxed in the offensive end and was finishing on more of the chances he was afforded. Ludwinski was my favourite player in this ‘04 group coming into the OHL, but throughout most of the year, I found myself questioning the high end upside. He’s made me rethink that. Like Owen Beck, there are a lot of pro qualities like speed, tenaciousness, defensive awareness. I think he’ll play in the NHL. Really curious to see how his game comes together next year. He could be a huge home run swing for someone in the second round.

Ludwinski sounds like a really smart 200-foot player with a great motor. He can play with pace, and it sounds like his offensive game is starting to progress. Aside from his small sample size in high-end hockey, there’s a lot to like about him and his game.

Ludinwski had 16 goals and 43 points in 67 games for Kingston in 2021-22’s regular season. He was 22nd among OHL rookies and sixth in scoring on his own team. He was far, far off from his team’s scoring leaders.
In the playoffs, he found more consistency with his offensive output, with 12 points over 11 games. That tied him for fourth on his team, and basically put him right within throwing distance of his team’s scoring leaders.

The Flames are an organization that tends to prioritize centres and defencemen when drafting, and it seems probable that’ll be their focus this year with so few picks. Ludwinski feels super Flamesy, in that his developmental floor seems pretty high – his pace, skating and two-way play seem to give him a foundation to become a solid pro – and the big question is whether his offensive skills can continue to develop over time.
In terms of availability, he seems right on the cusp of being available. Here’s a tour around the recent rankings:
Daily Faceoff: 49th
FC Hockey: 52nd
Elite Prospects: 55th
TSN (Bob McKenzie): 60th
TSN (Craig Button): 94th
The Athletic (Scott Wheeler): 63rd
Smaht Scouting: 45th
Dobber Prospects: 65th
There’s no guarantee he’ll be around, but the consensus seems to be that it’s out of the realm of possibility. He’s essentially ranked right around where the Flames pick and really suits their needs and usual drafting preferences. If Ludwinski is available at 59th overall, he very well may become a Flame.