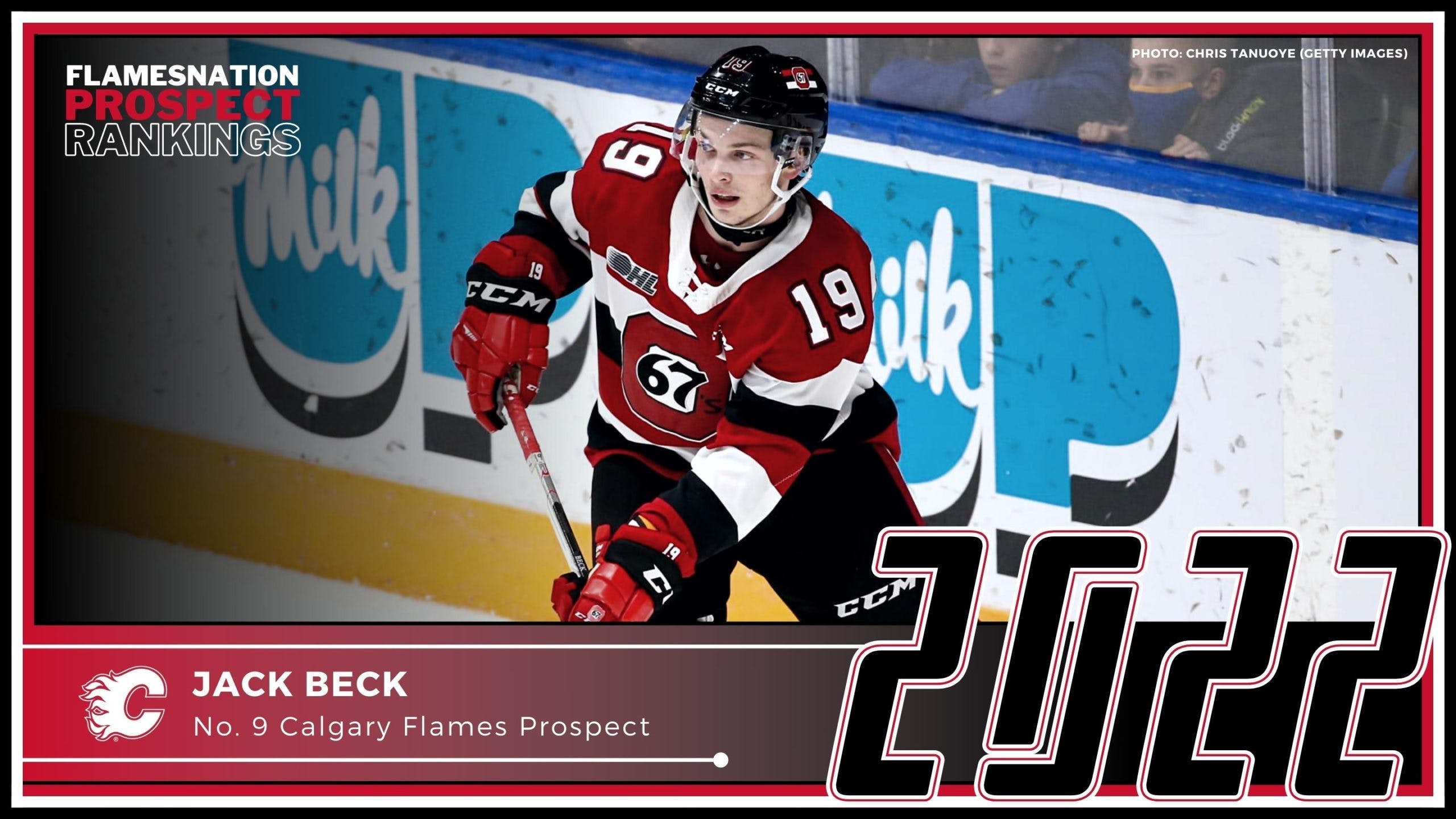 By Shane Stevenson
3 months ago
A late drafted prospect that is already putting up junior production better than his draft slot indicates – the Flames’ sixth round pick from 2021 Jack Beck comes up #9 in the FlamesNation Prospect Rankings.
A skilled left-shot winger Beck, plays for the Ottawa 67’s of the Ontario Hockey League. He has an outside shot at making the World Junior roster for Team Canada this upcoming winter. A full healthy season could see Beck even eclipse the 100-point mark, or even the 50 goal plateau.
Jack Beck
Left-handed winger
Born Apr. 12, 2003 (age 19) in Richmond Hill, Ontario
5’11”, 161 pounds
Selected in the sixth round (168th overall) by CGY in the 2021 NHL Draft 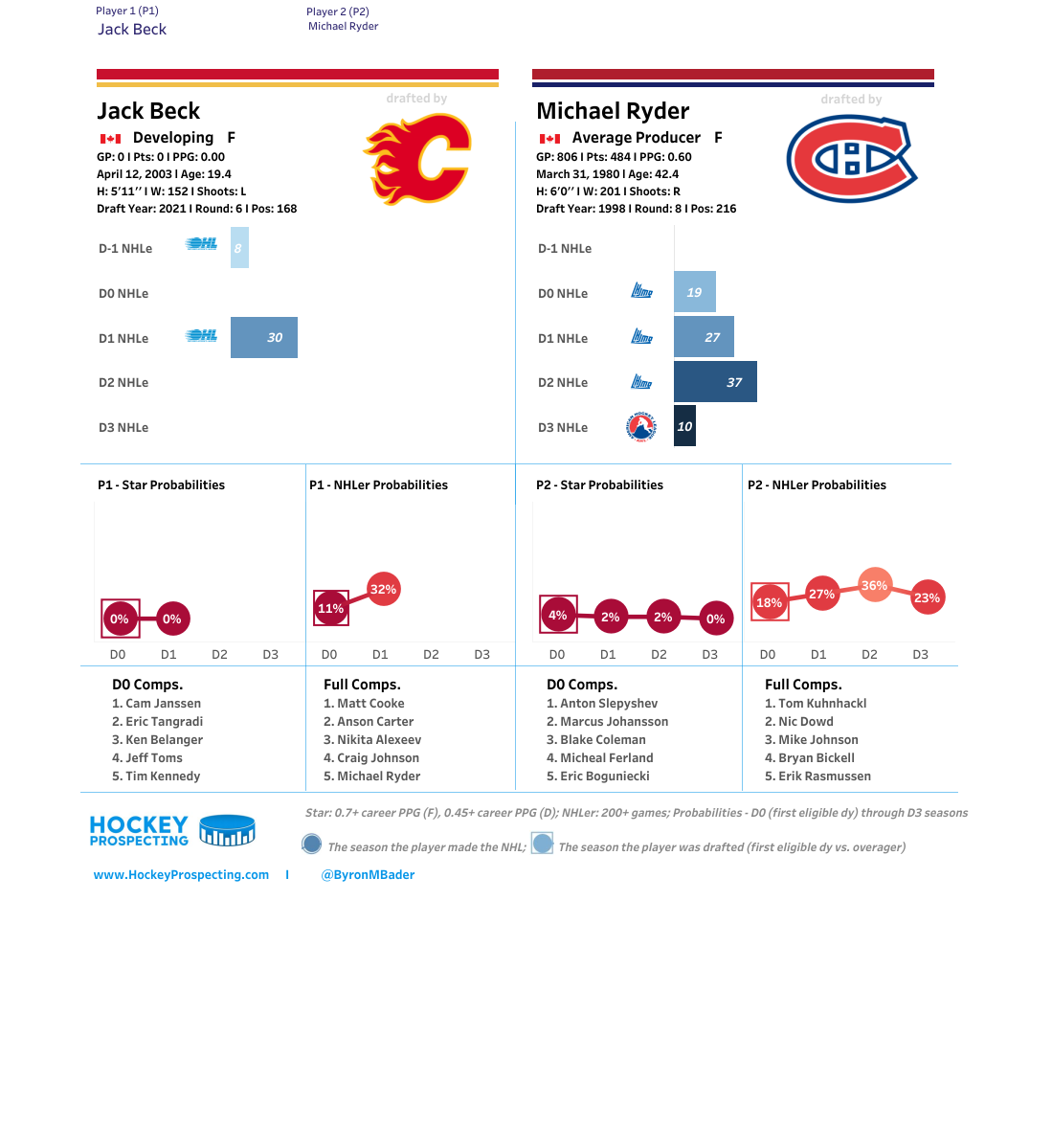 The Ottawa 67’s are not a stacked junior team by any means. Other than 10th overall pick Tyler Boucher (OTT) there isn’t much more sure-fire NHL potential on the roster besides Beck. Based solely on production Beck was the organizations best player netting 22 goals and 22 assists for 44 points in just 36 games. Vinzenz Rohrer (MTL) finished ahead of him by 4 points while playing in 28 more games.
This coming season should be huge for Beck – he’s going to be the main option for Ottawa this season. That means top power play minutes, top even strength minutes, and a heavy dose of overtime to wrap it all up. Add in that he can kill penalties (with an amazing puck pursuit ability reminiscent of Andrew Mangiapane almost) and get shorthanded goals.
If the Ottawa 67’s are out of contention come the OHL trade deadline I would not be shocked to see them move Beck to a Memorial Cup contender for futures. He could potentially have a huge year ahead of him.
One of 29 forwards to get an invite to the summer world junior selection camp for Canada, Beck does have a chance at playing in the best-on-best U20 tournament. There are some high profile returnees from the 2022 Gold Medal winning squad so Beck will have to bring everything he has to make it.
Brock Otten from OHL Prospects had this to say:

A really bad kidney kept Beck out of action for a while this year, but when he played, I thought we saw a real positive progression in some of those “athletic tools” that he needed to improve on. Beck looked quicker and stronger and as such, he was able to be more of a factor in transition, leading the attack for the 67’s, rather than purely supporting it. Of course, he’s still an extremely intelligent player… for my money one of the smartest in the entire OHL away from the puck. His positioning in all three zones is just always so spot on. You never see him out of position in the defensive zone, in particular. Do I think his potential at the NHL level has some limitations? Yes. I don’t think he’s a top six forward. However, if he can continue to upgrade his skating, Beck could easily be a Connor Brown type who has a long and productive NHL career as part of a third line. This is obviously a huge year for Beck as he hunts down a contract with Calgary. If he shows as well as i anticipate him to this season in Ottawa (a potential 40 goal scorer for the 67’s), signing him will be a slam dunk decision. If his game and skating improvements plateau, Calgary likely identifies him as a “tweener” and passes. But I’d bet on the former.

World Juniors, Memorial Cups, OHL championships – the sky could be the limit this year for Jack Beck.

Beck is intriguing because of his ability to score, it would project him as a future top 9 F if everything pans out. Getting data from Pick224.com we can see that Jack Beck had a 5v5 goal share of 53.85%. It was not a runaway number so one would like to see an improvement on puck possession and shot suppression. As Brock Otten said earlier – he tends to be in the right spots – but turning that into tangible stops is next.
Having the puck more does equal less shots against – it’s a good way to play and be successful.
There’s still a long road ahead for Beck – at least two years in the AHL should be needed before considering a look on the big roster. If he unlocks any untapped potential then the timeline could move up, but if there are any significant setbacks it could fall off completely.
Staying healthy and pushing that production up to a top 25 standard for the league this year is what you want to see right now, and 20 goals is ideally what you’d like to see from him when he transitions to the AHL. If Beck were to have a Schwindt type rookie year for the Wranglers in 2023-24 many people within the organization should be thrilled.
But that’s all for the future – but for now it’s nice to have a forward prospect in the system that has the potential to score big numbers this season.