Andrew Mangiapane thrived on the fourth line as a rookie — why couldn’t Jakob Pelletier or Matthew Phillips? 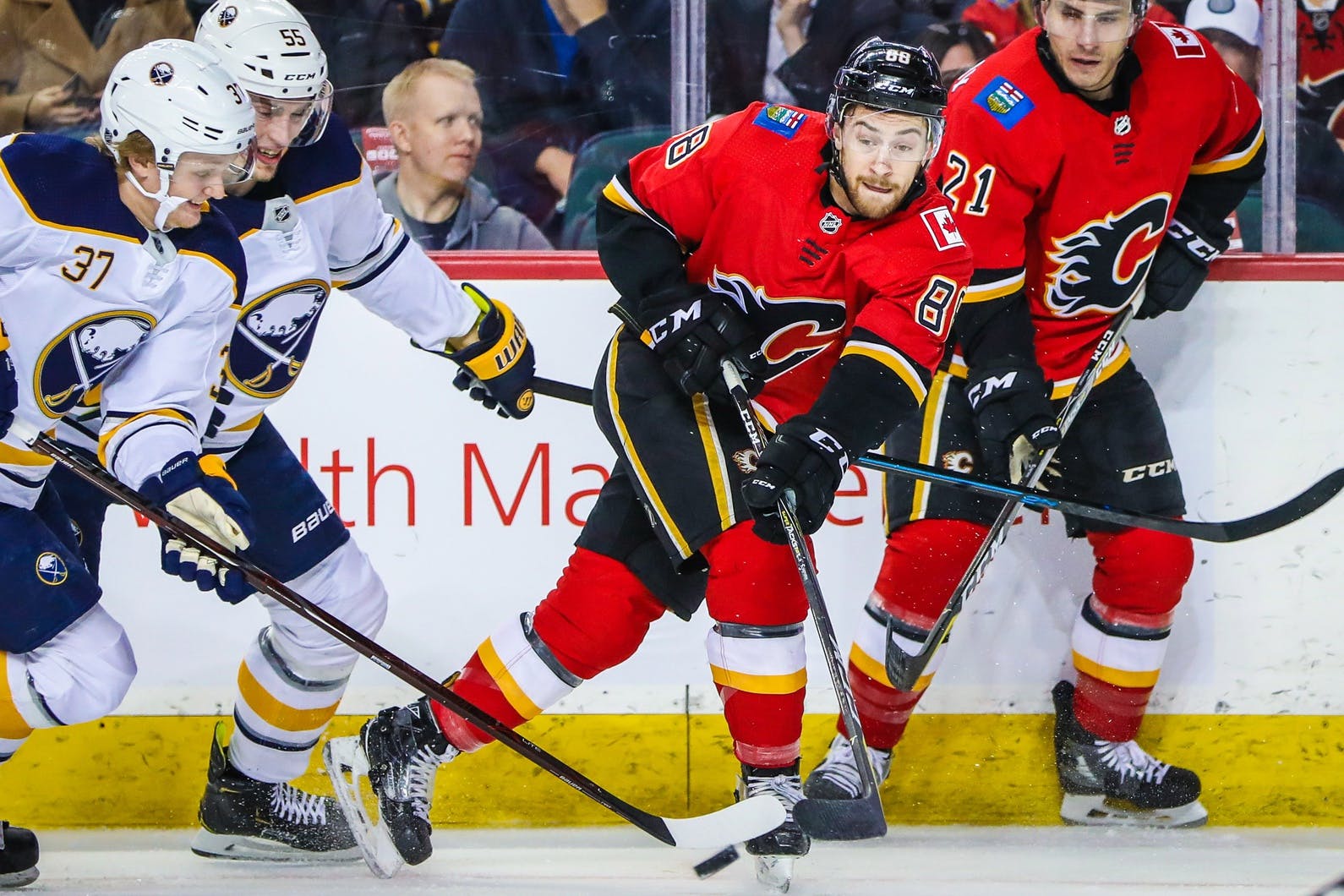 By Mike Gould
2 months ago
The Calgary Flames’ fourth line is bad. It doesn’t have to be.
On the whole, the Flames have struggled to score all season long. Only nine teams — primarily the likes of Arizona, Chicago, and Philadelphia — have fewer goals through the first six weeks of the year.
Individually, Brett Ritchie and Trevor Lewis have scored a few goals to start the year. Lewis has even had some strong games, particularly when playing with Mikael Backlund and Blake Coleman on the Flames’ third line.
Together, the line of Lucic, Lewis, and Ritchie has been disastrously bad in its short time together. Lucic appears to be the common denominator — he’s last among Flames regulars in basically every meaningful statistical category and has now gone a full season without scoring a goal with his hockey stick.
Kevin Rooney has also struggled in his outings with the Flames this year, leading head coach Darryl Sutter to effectively relegate him to the press box on a full-time basis. It’s clear Rooney isn’t viewed as a legit option to play anything more than fill-in minutes at this point.
As the Flames have continued to struggle, the AHL’s Calgary Wranglers have been red-hot. They’re 10–1–1 over their last 12 games, most recently blowing out the San Diego Gulls by a 7–3 score on Friday night. The Wranglers’ recent success has prompted numerous Calgary media members to ask both Sutter and general manager Brad Treliving about the prospect of recalling some skilled players from the farm.
FlamesNation contributor Pat Steinberg asked Treliving about what his team looks for in prospective call-ups on Wednesday’s edition of “Flames Talk” on Sportsnet 960 The Fan.
“What I’ve found is that players who have a chance to succeed at this level are players that are dominant,” Treliving continued. “And when I say dominant, that doesn’t necessarily mean statistically dominant, right? But they’re very good in whatever role that is that you envision them playing at the NHL level.
“It may be in a checking role. It may be in a bottom six role or a checking role. It may be an offensive role. It may not necessarily be a player that’s a top-line player in the American Hockey League coming in and being a top-line player here.
“But you want to put them in positions to succeed. If you’re an offensive player, when you get an opportunity in the NHL it only makes sense that you would be playing with offensive players. There’s never the perfect time to say, you’ve got to check all these 10 boxes.”
Here’s the thing: Calgary’s fourth line absolutely is not an offensive unit. But that’s by design.
There’s no reason why an NHL team needs to dress a veteran line that only exists to a) be big and b) get crushed at both ends of the ice. Every night, the Flames do just that.
Instead of rehashing the same stuff we’ve said here at FlamesNation for the last few weeks about the Flames needing to recall some of the Wranglers’ top scorers, let’s take a look back at a Flames team of the past that was actually able to roll four effective lines.
Andrew Mangiapane is one of the Flames’ biggest player development success stories of the last 20 years. Once a relatively unheralded sixth-round pick, Mangiapane worked his way up at every level and finally broke into the NHL at age 23 as a key secondary scorer on the 2018–19 Flames.
And he did it on the fourth line.
At first glance, it makes sense. The fourth line typically faces the easiest competition and plays the least. Why shouldn’t prospects be able to cut their teeth down there?
Former FlamesNation contributor Kent Wilson has a really good piece on a personal site of his talking about why NHL teams typically favour veteran-laden fourth lines over combinations with more tangible upside. And as part of his rebuttal to the typical practice of NHL teams to stack their bottom-six lines with replacement-level veterans, Kent makes a pretty strong point:

The fourth line becomes a far greater contributor to an organization when it is a semi-permeable membrane for talent and not role.

What does this mean? Well, as it’s currently constructed — and as Treliving described it in his answer to Steinberg above — the Flames’ fourth line is loaded with intangibles (size, physicality, character) as a substitute for talent.
But these intangibles shouldn’t take precedence over shooting, passing, and scoring — not on any line. They’re nice-to-haves. But anyone and everyone on an NHL team needs to be able to score or, at the very least, influence his team to score more than the other team. Scoring is the only outcome that matters.
Back in 2018–19, the Flames brought Mangiapane up to the NHL midway through a banner individual campaign in the AHL. He played on the fourth line down the stretch and scored eight goals in 44 games.
Mangiapane averaged 10:33 per night. He barely logged any power play time. But he played on a good line with good players, and the team was better for it — if you’ll recall, that line drove the bus for the Flames down the stretch as the likes of Johnny Gaudreau and Sean Monahan faltered.
It isn’t a waste of time to bring up Jakob Pelletier and Matthew Phillips if they aren’t immediately slotted next to the Huberdeaus and Kadris of the world; as a rookie, Mangiapane played with Derek Ryan and Garnet Hathaway. Ryan is a 5’10” centre who had sterling defensive impacts with the Flames; Hathaway was 27 at the time and had recently graduated from the AHL as one of the Stockton Heat’s top scorers.
A lot of NHL fourth lines look exactly like the Flames’: they’re big, they’re slow, and they can’t handle the puck. That was the story back in 2018–19, too, and the Flames took advantage. The Mangiapane–Ryan–Hathaway line was nothing short of dominant in its time together that year.
Lewis could feasibly function as a reasonable facsimile for Ryan on the fourth line. Ritchie could even play the role of Hathaway, although he’s nowhere near as fast. And one of Pelletier and Phillips could theoretically fill the spot once occupied by Mangiapane.
Lucic isn’t there. When he first joined the Flames, he could score the odd goal and keep up with the play while also doing all the extracurricular things he does to endear himself to the coaching staff. Nowadays, he’s exclusively a physical presence — and, with zero fights this year, even that aspect of his game is deteriorating.
Besides, it’s exceedingly rare for prospects to come in and play top-six minutes right away. If you won’t call up a high-scoring youngster until you have a spot open for him on the first or second line, you’re not going to end up promoting many prospects — and, in recent years, the Flames haven’t.
The Flames are already one of the biggest and oldest teams in the NHL. They rank fifth in average height, third in average weight, and fourth in average age. It stands to reason that they might benefit from trying something different.
Pelletier and Phillips are both overdue for legitimate NHL shots. Of the four players from the 2019 first round who have yet to make their NHL debuts, Pelletier’s case for a promotion is by far the best. Phillips, of course, is the AHL’s leading scorer.
Mangiapane thrived in his early exposure to the NHL on a fourth line. He still managed to produce at a strong rate when playing next to a defence-first centre and an energy winger — because, even with their intangibles, they were good players who gelled well together.
The Flames’ fourth line doesn’t work. There’s no reason to keep going back to that stylistic well. The last Flames fourth line that really clicked featured three players — including two recent AHL graduates — with an intriguing mix of attributes.
Ultimately, the goal of the Flames’ fourth line should be the same as the other three: to score more than the other team. If it can hit, that’s a bonus — not a necessity. Size ought not to be a requirement over scoring.
Right now, the Flames have that backward.
Editorials
Recent articles from Mike Gould