Beyond the Boxscore: Calgary Flames and Carolina Hurricanes have playoff-like tilt. 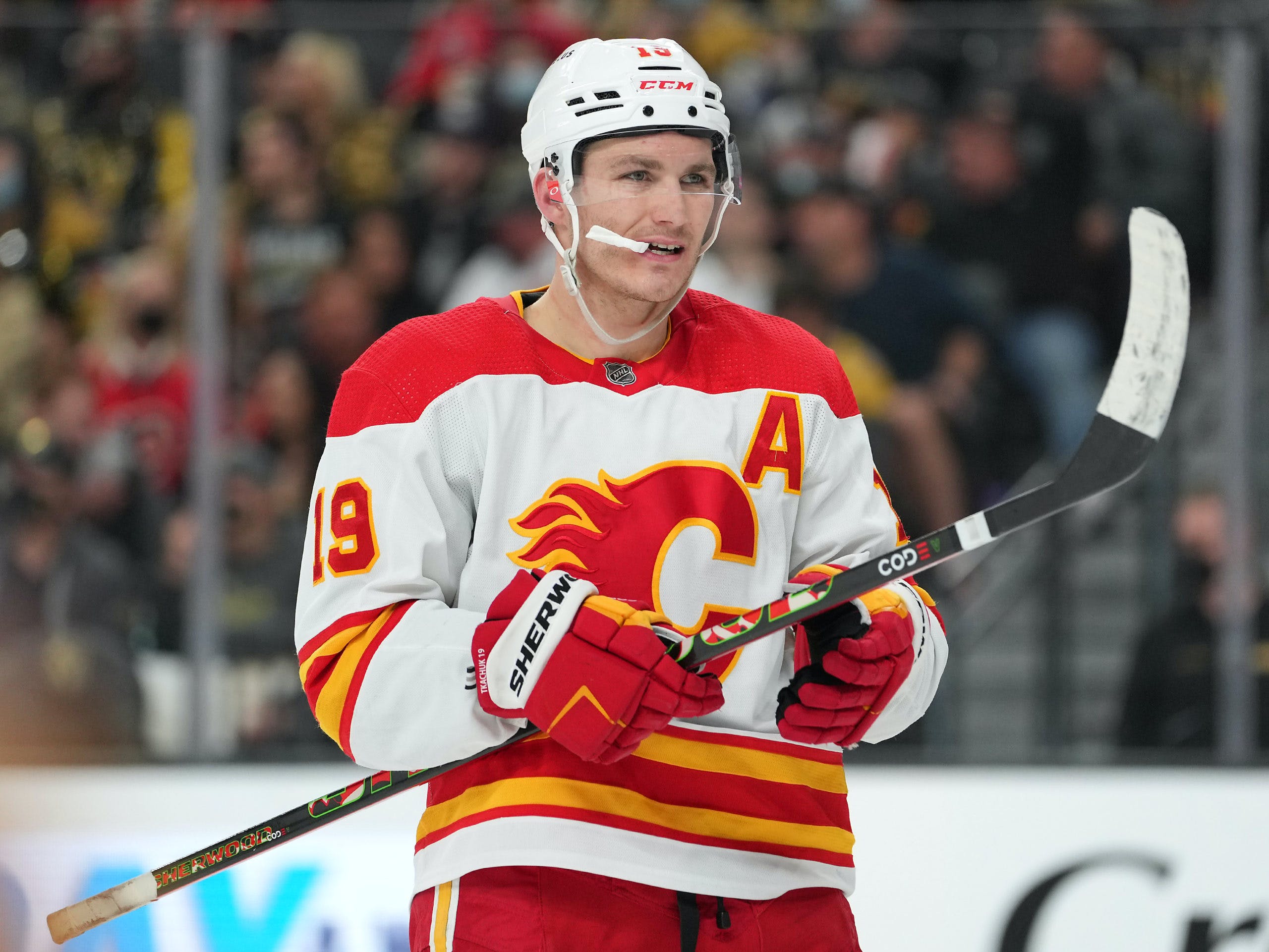 By Shane Stevenson
11 months ago
Back and forth for the majority of the game – ending with a third period that saw Calgary get robbed worse than the Manhattan bank in Die Hard with a Vengeance. It wasn’t even the goaltender stopping these pucks on the goal line, it was defenceman. Now they’ll go into their dressing room calling it skill – or well-placed sticks – I’m going to call it what it was: pure luck. Once the game went to overtime Calgary didn’t have the speed (or strategy) to compete. I am truly grateful the playoffs are just continuous 5v5.
CF% – 51.82%, SCF% – 44.55%, HDCF% – 49.63%, xGF% – 48.24%
It’s a Team Game – This was as evenly matched a game as I’ve seen yet. This was not a game dictated by any individual team’s play – strong or weak. Both teams gave the other teams power plays (we’ll get to that later) but could only score at 5v5. Hanifin scored on a goal that Andersen should have had – but every time they beat him after that it hit a random stick and didn’t cross or bounce over the goal line. Fascinating playoff-like vibes radiated from this match.
Corsi King – Adam Ružička (63.57 CF%) seems to have acclimated well lately. After an extremely rough first game he’s been able to be more noticeable in positive ways on the Flames fourth line. He’s got size up the middle and a good scoring sense – I’m hoping he gets an extended look. Your top D pair were the redemption lads – Nikita Zadorov (62.39%) and Erik Gudbranson (62.21%)
Corsi Clown – In a reverse twist of fate the typical strong D pair struggled against the Canes in this one – Noah Hanifin (23.38%) and Rasmus Andersson (31.88%) were at the very bottom of everyone. How Ružička got such high numbers and how Brad Richardson (41.14%) and Trevor Lewis (45.97%) failed to is confusing, but not unexplainable. They don’t play every second together always, Ruzy was able to find some extra chances without those guys on the ice with him, another positive for the youngster.
Taken By Chance – The fourth line was heavily sheltered; one could guess the coach knew the skill level of the team he was playing. In saying that though, no member of the fourth line allowed a high danger chance against while all being able to create one together. It was a stark difference from Noah Hanifin (17.56 SCF% // 0 HDCF%) and Rasmus Andersson (24.40% // 0%) who allowed two high danger chances against and created none. No Hanifin’s shot from the point through maybe one guy as a screen is not classified as a high danger chance.
xGF% – Have not given the Monalubé line some love yet. Milan Lucic (74.17 xGF%), Dillon Dubé (74.17%), and Sean Monahan (71.18%) have been electric since being put together. It is unfortunate they find their groove and the BAM line goes cold. Blake Coleman (21.60%), Mikael Backlund (23.13%) and Andrew Mangiapane (24.66%) may have been struggling recently, but long term I have complete faith in the three to rebound and be key to the team’s success. Defensively moreso than offensively.
Game Flow –

Calgary – then Carolina – then Calgary – and it goes on the entire night. All the penalties disrupted the flow, but i’d rather actually have the game called then letting the rink become a lawless wasteland that ends in suspensions and misery.
Game Score – With his assist Elias Lindholm (1.15 game // 1.54 average) powered himself to being the top Flame. Naturally linemates Matthew Tkachuk (0.76 // 1.50) and Johnny Gaudreau (0.65 // 1.66) were up near the tops for Calgary – would have been even higher if any of those darned goals bounced another half inch. Monalubé had their numbers take a hit by virtue of being the line that got scored against.
Shot Heatmap – 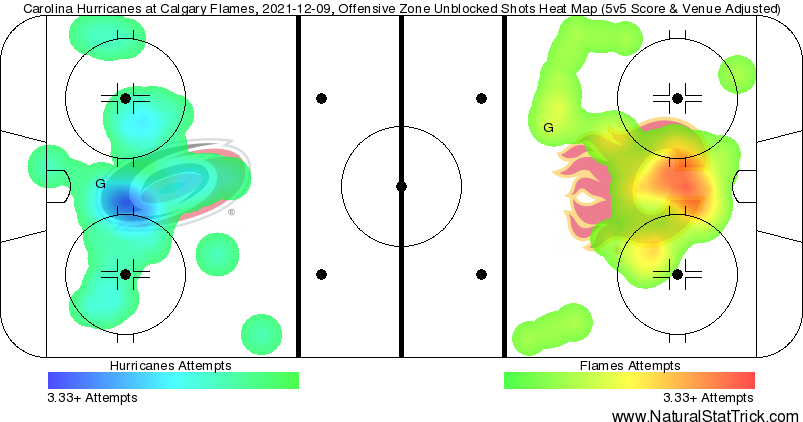 I’d say overall neither team played bad defence, but neither team played predominantly well either. Weird game in the fact that it’s as even as even could get – which is good news to be able to do such a thing against such a good team (even if they were without their entire regular compliment of RHD).
In The Crease – Jacob Markstrom did his job tonight. Both teams ranked high in the total goals against department, so this was one where he needed to be sharp. 1.26 expected goals against – 0.938 5v5 SV% – and a high danger goal against. Just for reference sake the goal Freddie allowed was low danger (and I even called a weak Fred goal in the Slack chat before the game). After that I have zero complaints about Jacob Markstrom
Today’s Specials – I was going to talk about the power play, but it’s time to discuss overtime instead. Calgary employs a clear man coverage defence in the NZ, but a hybrid man/zone coverage in their own zone. If the opposition gets a lot of lateral movement up high (top of circles) then the Flames players get at risk of running into each other. Carolina almost got that to work 2 times before Aho decided he was just going to be faster than Lindholm through the NZ. Maybe a new strategy that might work – let em run and gun. You keep losing in OT anyway, may as well try something new to try and win.
Flashalytic’s 3 Stars –
1) Elias Lindholm
2) Matthew Tkachuk
3) Johnny Gaudreau
The Flames come back Saturday on Hockey Night in Canada – 8 p.m. MT against the big bad Boston Bruins. All covered here at FlamesNation!
P.S. Bobby Margarita gave us a new meme yesterday – I love it.
(Stats compiled from Naturalstattrick.com // Game Score from Hockeystatcards.com)
Uncategorized
Recent articles from Shane Stevenson