Beyond the Boxscore: Calgary Flames don’t get enough by Oettinger, Stars force Game 7 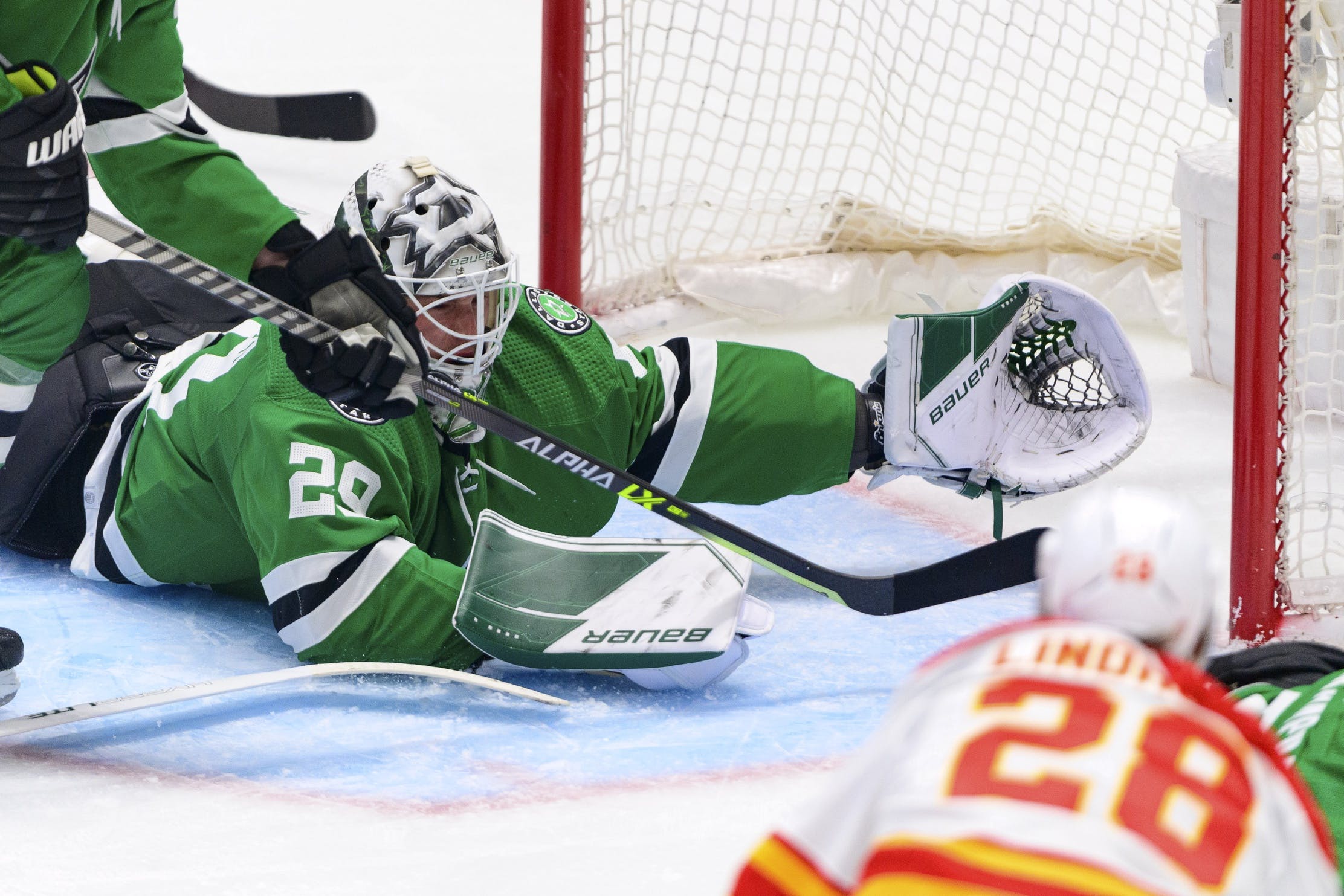 By Shane Stevenson
6 months ago
The Calgary Flames had a chance to move on and they let one get away. It was a valiant effort for most of the evening before Dallas started a serious push back to the Flames attack. As the third period played out Dallas was able to keep chances at a minimum – the first real time in the series the Flames had been stopped from creating anything. Jake Oettinger kept his team in the game early once again, continuing his excellence in this series.
CF% – 51.42%, SCF% – 46.87%, HDCF% – 56%, xGF% – 54.62%
It’s a Team Game – Credit to the Dallas Stars for being able to take control of the game when it mattered. The gave the Flames almost no clear path through the middle of the ice all night making Calgary have to try and comeback with nothing but dump-ins. A tall task for any team, one that was out of the Flames reach in this one.
Corsi King – Trevor Lewis (64.27 CF%) once again was a positive impact player, one of the most consistent Flames players of the first round. Mikael Backlund (59.32%) was able to find the scoresheet again – reunited with Coleman (56.28%) and Mangiapane (57.10%) they are controlling play when on the ice.  The top line has been fine possession wise but the goal scoring from the regular season has got to find its way into game 7.
Corsi Clown – Much has been made online already about Calle Jarnkrok’s (35.39 CF%) game – he went 0-for-12 in the face-off dot. He’ll just plain be better next game – I truly think that this is a “one bad night” situation for the Flames forward. He’s a professional whose made it all the way to the Stanley Cup Final before, I believe Calle is going to bounce back strong.
Taken By Chance – Another player that has been consistently positive in the first round has been Erik Gudbranson (63.36 SCF% // 100 HDCF%). Throughout all the games he’s killed penalties well and has stayed on the defensive side of the puck. Johnny Gaudreau (62.52% // 64.80%) had the most involvement in the raw total of high danger chances. He looked extremely dangerous all night but came up just shy for enough offence. Hard when most nights they have to burden the offensive load themselves. Defensively these top players have played well, but the Stars goaltender has really been the difference for the most of this.
xGF% – We await with bated breath to see if Chris Tanev (53.04 xGF%) is alright. He left the game with an apparent injury although at the time of writing this nothing on that has been confirmed by anyone. He is a massive piece to their blueline and losing him would be a significant blow to the Flames. Oliver Kylington (48.17%) certainly plays with more swagger when beside the calm, reliable presence of Tanev.
Game Flow –

You would think that eventually the Stars goaltender would make a mistake of some sort but he just looks completely un-phased. Calgary has been good at times in terms of dictating play and getting the majority of chances. If not for Oettinger the Flames probably could have won this series in 5 or 6, but because he’s playing at historic levels Calgary has to find a way to persevere.
Game Score – Michael Stone (1.89 game // 0.71 average) led the way with his two-point outing. Rasmus Andersson (1.61 // 1.06) and Mikael Backlund (1.47 // 0.75) both finished higher because of their points, but also their strong 5v5 play in the game. Johnny Gaudreau (1.04 // 1.84) was the only other Flame to finish above a score of 1.00.
Shot Heatmap – 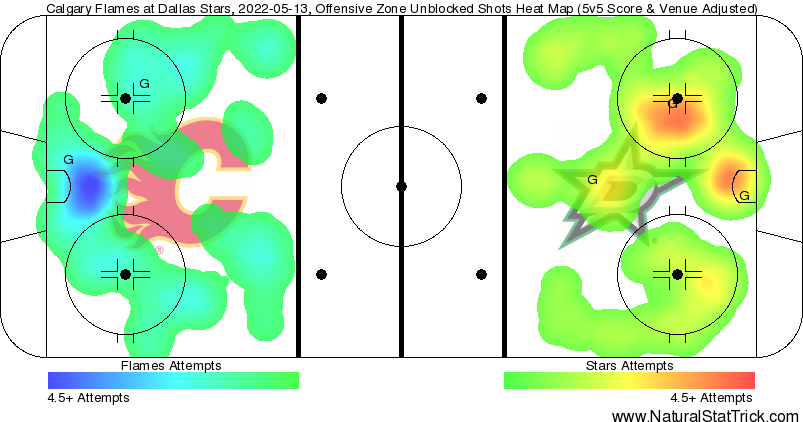 Calgary did get into the Stars crease early and found ways to him for most of the early parts of the game. It wasn’t until just before the third Stars goal was scored that Dallas picked up the pace of their game by a significant margin. It was unexpected to me and that burst of speed led to the chance that became the 3-2 goal.
In The Crease – Markstrom has been an absolute massive reason Calgary were able to even be in the position to close out a team, but I would not doubt for a second if he wanted that Roope Hintz goal back. 2.32 expected goals against – the most the Stars have created all series – with one high danger and two medium danger chances getting by him (5v5 only). It is so hard to out-duel Oettinger on a nightly basis right now, but Markstrom is right there. He just needs to achieve that W one more time.
Today’s Specials – Another night with no power play goals – they just have not been able to put one of the plenty good chances earned through the net. The penalty kill continues its aggressive approach and pretty much gave the Stars no real good lucks all night. It’s been a massive strength in their game… but it also has for the opposition.
Player Spotlight – Matthew Tkachuk – The game on Sunday is going to be the biggest games of some players careers, Tkachuk included. He’s turned into a star player during the regular season, but now with the lack of offence is getting the same old questions some used to say about Gaudreau. Tkachuk definitely wants to move on – you can see it in his compete level. He’s had really strong games this series too, but Oettinger has stopped a lot of surefire goals. I have hope game 7 will be perfect for Tkachuk, who tends to score big goals in big moments.
Flashalytic’s 3 Stars –
1) Johnny Gaudreau
2) Erik Gudbranson
3) Michael Stone
The Flames will play with the threat of elimination on Sunday night (as will Dallas). It’s Game 7.
(Stats compiled from Naturalstattrick.com // Game Score from Hockeystatcards.com)