Beyond the Boxscore: Calgary Flames don’t have enough ammunition to crawl back against Avalanche By Shane Stevenson
15 days ago
The Calgary Flames found themselves in a hole early and were never able to quite dig themselves out – but not for a lack of effort. The Colorado Avalanche themselves played a really strong game – constantly finding ways to get turnovers in the neutral zone and direct the puck back towards the Flames end. They did in fact struggle to get too many quality scoring chances on Calgary but were able to get enough by the ‘tendy to win. The Flames main issue tonight was really the same thing it’s been all season – a lack of ability to score when they get their chances.
CF% – 45.25%, SCF% – 52%, HDCF% – 50.92%, xGF% – 55.27%
It’s a Team Game – If Chicken Little wants to scream that the sky is falling after that one… let him. Normally after two losses I start to get a little concerned with bad habits I sometimes see creeping in, but this game wasn’t that. It was some point-blank saves by Georgiev plus an inability – or maybe a directive – to not immediately come out from behind the net and attack the crease. Now that can be dangerous if you do it all the time – you can end up looking like Kassian after Tkachuk made the “on the tracks” hit. The Flames don’t even try it sporadically – it’s an aspect I’d like to see the forecheckers install in their arsenals.
Corsi King – Walker Duehr (72.44%) continued to bring a bit of speed and energy to the fourth line – no diss on him but some goals would be nice and the guy in the press box has a history of being better suited to get those. Have to make a daily jab at Pelletier sitting at least once an article I figured I’d get it out of the way early so we can talk about other things. The lines got mixed up in the third period, so players ratios aren’t necessarily tied to linemates like they usually are. They are still going to be skewed to what they were to start the game, but any small variances from another can show a slight glimpse of who did good in the final frame.
Corsi Clown – Michael Stone (35.71%) and partner Nikita Zadorov (42.42%) ended up on the bad side of some penalties in this one. Them and the Backlund (42.16%), Mangiapane (37.84%), Coleman (36.00%) trio got buried a bit. The one thing I dislike about the new lines was these three got broke up. For the first time though Mangiapane had a new centre in Kadri (46.53%) but still had Coleman on the other wing. Interesting to see what can happen there.
Under Pressure – 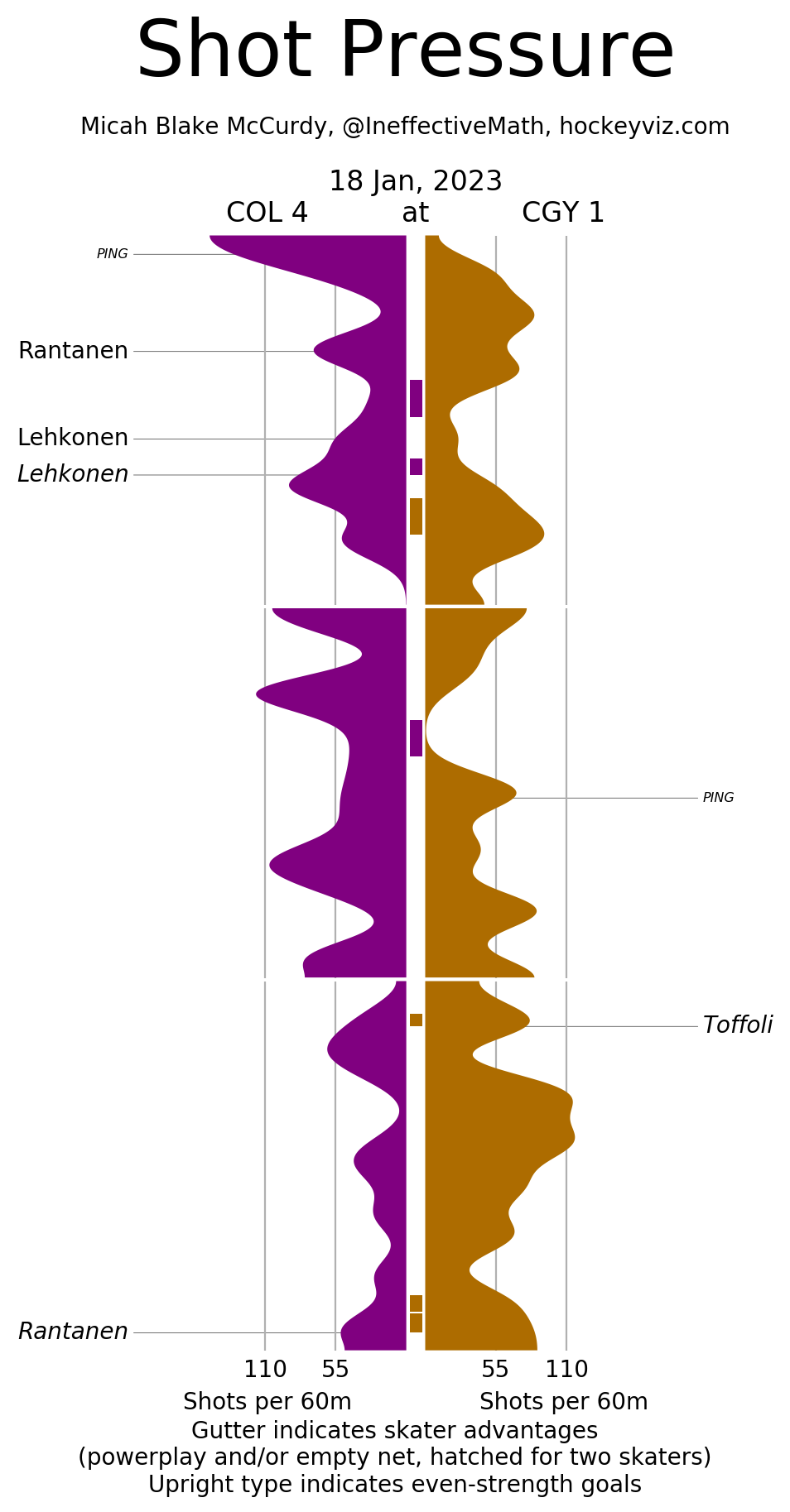 Taken By Chance – The Avalanche did not get a ton of high danger looks against – but when they did, they were massively noticeable. Jonathan Huberdeau (72.31 SCF% // 100 HDCF%) was amongst the 6 Flames players that didn’t see a high danger look against, and of those 6 he was involved in the most raw HDCF. For the whole game that honour belongs to Kadri (70.19% // 70.04%) with over 5 for. Ever since he got that All-Star nomination he’s been back to looking like early season player that could impact every game – Calgary’s desperately searching for one of those to step up so they can go on a mini-run.
xG Breakdown – 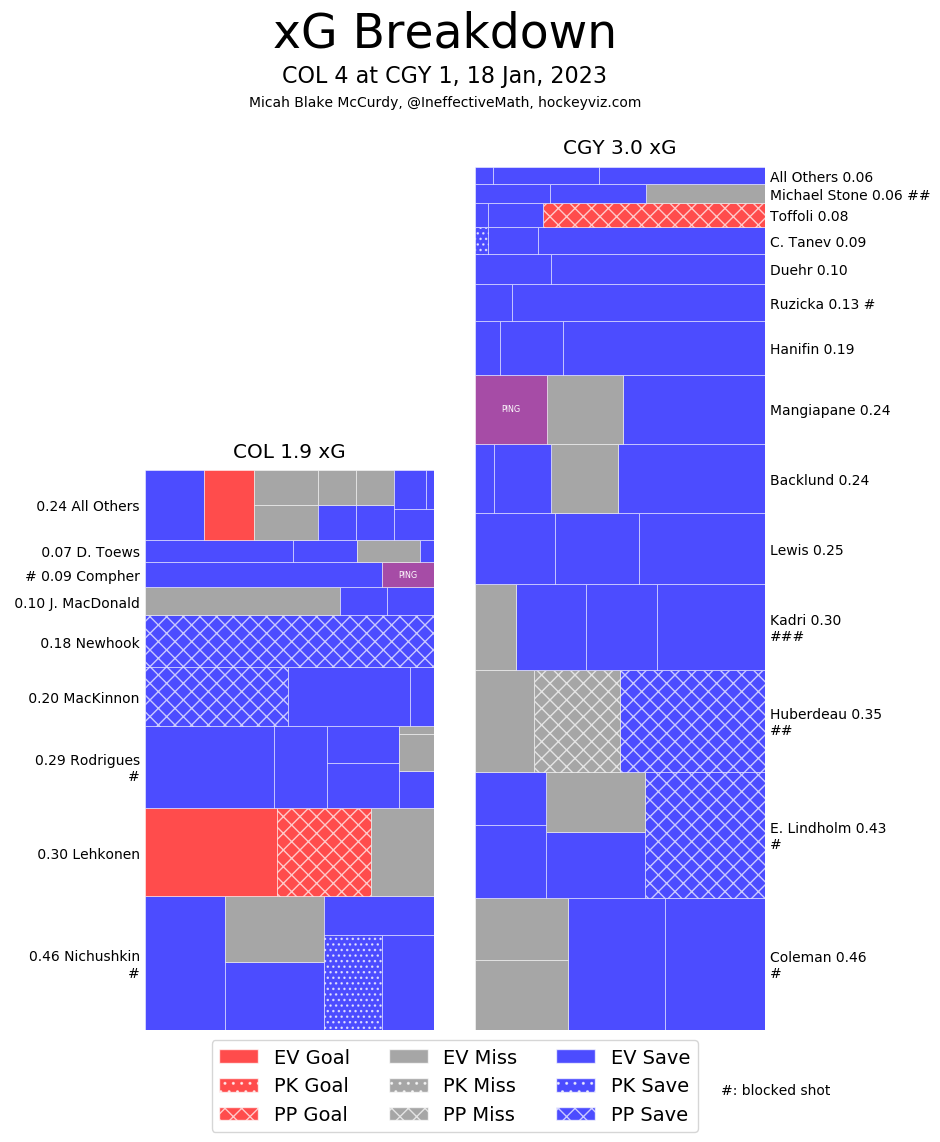 xGF% – Elias Lindholm (39.53%) has been in a real rough stretch since this first game against St. Louis. He’s been heavily losing his matchups and it’s directly correlating to Calgary losing hockey games. He’s their number 1C in all-situations and is super important to the success of this team. Ružička (59.06%) still is at fourth line centre as of the line switching. He’s kind of faltering down there production wise, but the head coach doesn’t care about production he just wants smart responsible play in his own zone.
Game Flow – 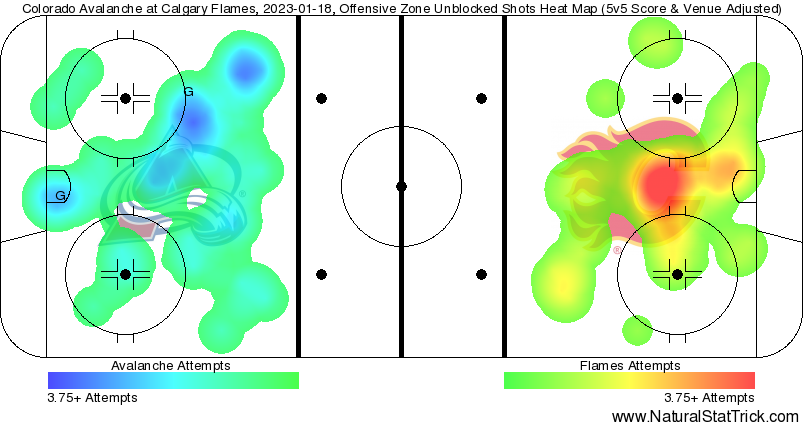 In The Crease – I will give that it was a valid question to see if Vladar should have started the second period, but the coach in his press conference adamantly defended his goaltender and said Markstrom was going to stay in all the way. Now a quick goal against could have changed that, but after the first period goals he never let another one get behind him. 2 5v5 goals against one high danger and one a low danger goal on a total of 1.51 expected goals against. All 5v5 numbers of course.
Player Spotlight – Tyler Toffoli – Finally the man got a bounce off the bar and in the back of the net. All those goals I keep asking the universe for are all still patiently waiting on Toffoli’s stick – eventually his luck is going to turn for the better. I’m hoping this is a kickstart to all that because if the Flames can even get just one player they can rely on for a couple goals every ¾ games then they’ll be doing just fine. Too many hot and cold people right now – the posts have me believing a late season goal scoring stretch is coming for number 73.
The Goals –
Flashalytic’s 3 Stars –
1) Nazem Kadri
2) Walker Duehr
3) Rasmus Andersson
(Stats compiled from Naturalstattrick.com // Game Score from Hockeystatcards.com // xG and Under Pressure charts from HockeyViz.com // Game Flow and Shot Heatmap from NaturalStatTrick.com)
Editorials
Recent articles from Shane Stevenson