Beyond the Boxscore: Calgary Flames find holes on Varlamov in low event win over the Islanders 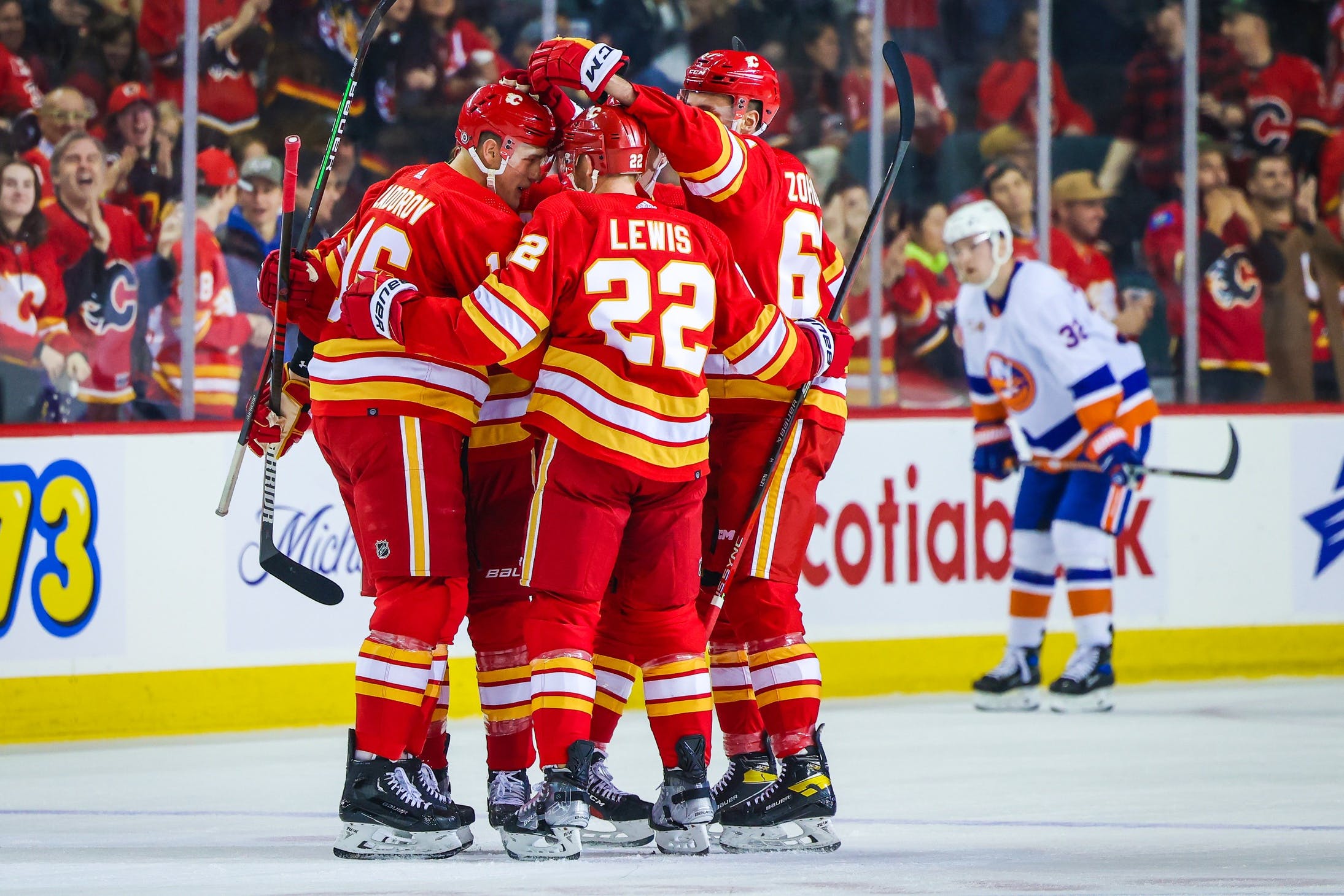 By Shane Stevenson
19 days ago
The goal damn burst and the Calgary Flames executed their game plan in the third period as the Flames bounced back with a win over the New York Islanders. Aided on some soft goals by the Islanders goaltender Calgary also received a benefit from the Islanders in Edmonton the night before. As a result, the Flames were all over the Islanders to start and were finally rewarded with some goals for strong early play. There were still the occasional defensive breakdown and the issue of a powerless powerplay, but a solid team effort, nonetheless.
CF% – 65.49%, SCF% – 59.06%, HDCF% – 58.2%, xGF% – 58.31%
It’s a Team Game – The Islanders completely vanished from relevancy the second the third period got underway. Calgary put just a tiny bit of pressure back and played as low-event hockey as one could. The Kadri goal only happens once every 100 shots – if that – but it was all Calgary needed to bring the win home. It’s not like Calgary themselves got a bunch of high danger chances either, they still only wrangled up around 7. If the Islanders had a rested Sorokin this very well may have been an Islanders win, the goals that were scored were all very low percentage chances.
Corsi King – They don’t stay in the dumps for long, Weegar (77.78 CF%) and Tanev (77.18%) hit the rebound against the Isles. In theory they should dominate next game against the Blackhawks too. Coleman (75.39%) and Backlund (72.44%) led the forwards here like they normally do. Mikael Backlund mentioned he wasn’t a fan of advanced statistics today and I couldn’t agree more with him. Players should not worry or even look up what their metrics are – it’s not a tool that helps them directly. No, the analysts and video coaching teams need to look for patterns in the numbers and then go on the game tape to find where the problems lie. Take that to the coaches which can then be coached into the player in a proper way that’s tangible instruction. Players just play, the numbers may be about you but they sure are not for you.
Corsi Clown – Michael Stone (37.91%) and Adam Ružička (41.21%) were the only two guys below the 46% mark I like to look at. Nikita Zadorov (48.09%) was in purgatory here too. The Islanders started taking chances from wherever they could get them being down multiple goals. Usually, their games are much closer and as such their attack is not so upfront. When teams default to the pepper method it always is felt with a hit in the CF% column.
Under Pressure – 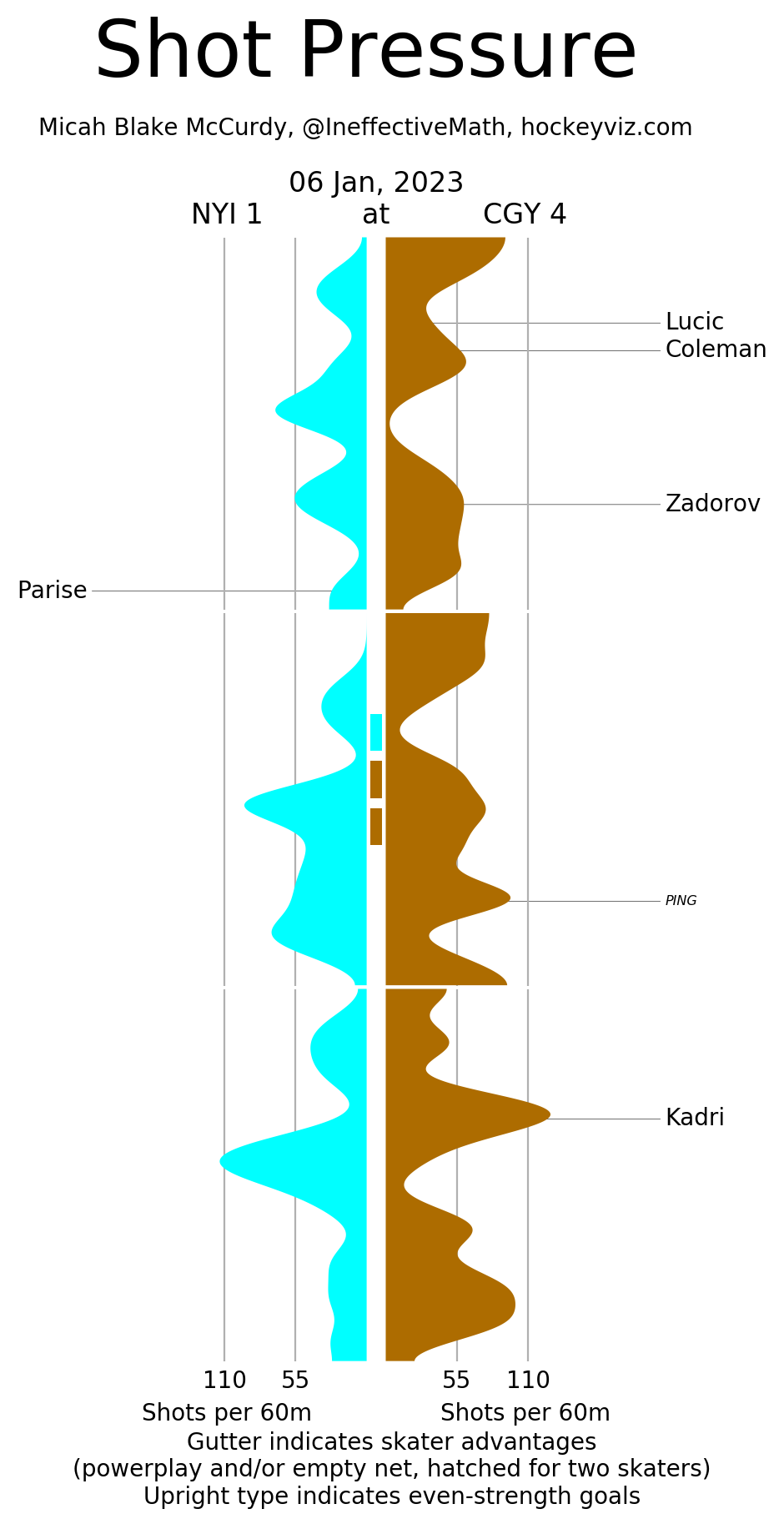 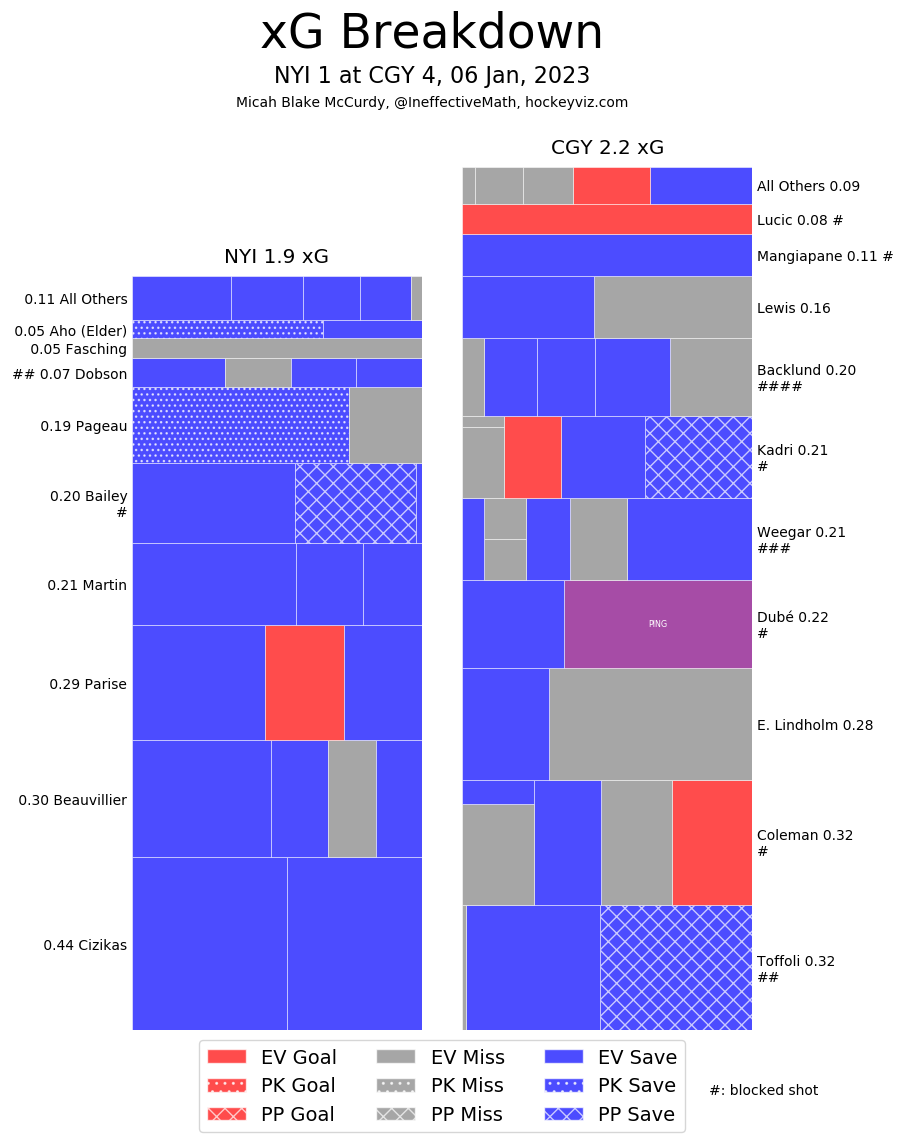 xGF% – Elias Lindholm (73.06%) was the top forward behind the same two defencemen I keep mentioning. Tyler Toffoli (71.17%) was right alongside him yet again as the two barely have played apart this season. Huberdeau (63.64%) and Kadri (61.79%) both had well above average games as well. The two goals – by Lucic and Kadri – both very fortunate that Varlamov messed up. That does not mean they weren’t deserved though – good solid work from them too with Lucic (65.78%). Noah Hanifin (43.75%) got stuck away from Andersson (64.89%) for at least one quality attempt 5v5… I’ll let you guess which breakaway chance that was.
Game Flow – 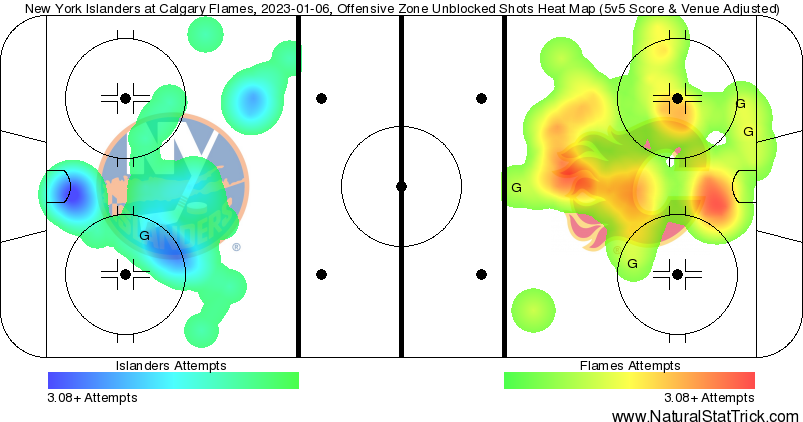 In The Crease – Markstrom wasn’t challenged often but when he was it was a ten bell save. Two breakaways and a few minor lapses in coverage led to some quality attempts for New York, Markstrom just had the answer. The goal that did beat him credit Parise with making a move that froze both the defender in Zadorov and the tender in Markstrom before changing his shooting lane and ripping off the shot. 1.61 expected goals against with just the one medium danger goal going in.
Today’s Specials –
That’s what I think of their powerplay right now.
Player Spotlight – Milan Lucic – I was going to make a comment on how the puck seemingly bobbles on his stick when he gets it more than it should, but it led me to another realization – Lucic has had the puck find him a whole heck of a lot lately. He may not be getting the chances off with a great intent but he’s showing the ability to be in the right position. The drop passes could use a little more finesse, but I’m not expecting that from a guy whose been a crash and bang type player since his junior hockey days. The second line as a unit had been on a downward slope but this game was a big uptick. Here’s hoping a little confidence can turn some of those puck touches that keep finding Lucic into more offence.
The Goals –
Flashalytic’s 3 Stars –
1) Weegar/Tanev
2) Kadri
3) Markstrom
The Flames play 5PM MST in Chicago on Sunday night.
(Stats compiled from Naturalstattrick.com // Game Score from Hockeystatcards.com // xG and Under Pressure charts from HockeyViz.com // Game Flow and Shot Heatmap from NaturalStatTrick.com)
Editorials
Recent articles from Shane Stevenson