Beyond the Boxscore: Calgary Flames look gassed against the Predators in loss By Shane Stevenson
17 days ago
From the second the puck dropped it was clear the Predators were in control of the game – Calgary never found the energy to take it back even with multiple power play opportunities. This one may not have a lopsided final score, but it was not a close match. Nashville had the better chances and were able to constantly get behind Calgary’s defence for chances in tight. Jacob Markstrom’s second goal against may not have been perfect but he’s the reason the game never got outside of Calgary’s reach. Even when under-performing they are masters at keeping things to within a goal – eventually someone has to be the guy to step up and get that next one. Scott Wedgewood can’t let in 4-point shots a game for you 82 times a year.
CF% – 40.46%, SCF% – 37.04%, HDCF% – 21.24%, xGF% – 33.84%
It’s a Team Game – I’m not putting lipstick on this pig it was a truly terrible performance by the skaters. The Predators handed Calgary a fairly decisive 4-1 loss in the first 10 games of the season too, making me think they may just have the Flames number. The broadcast kept showing the Preds are 5-0-2 against Calgary in their last seven (add a W to that for them) – and in those two losses they only came off literal last second heroics for Matthew Tkachuk. The guy he was traded for? Not even on the ice with the goalie pulled. He didn’t deserve to be after his performance tonight, but it’s still worth pointing out.
Corsi King – One defence pair and one singular forward – that’s all that finished in the positives. MacKenzie Weegar (55.56%) and Chris Tanev (52.09%) did okay, while Dubé (53.97%) was sandwiched between them. A few players stood out despite the terrible metrics tonight in a good way – Kadri, Dubé, Zadorov, and as usual the Backlund line.
Corsi Clown – Can I pick the entire roster? I’m going to – outside those six I mentioned lump everybody in here. They were constantly letting the Predators gain possessive zone entries and the Preds would find a way to get it to the crease and make Markstrom’s life difficult. The defence and the forwards were pretty well helpless in stopping them until they got one or two quality chances before trying to break out of their zone – which they failed at doing more tonight than any point I’d seem them in the last month… maybe two.
Under Pressure – 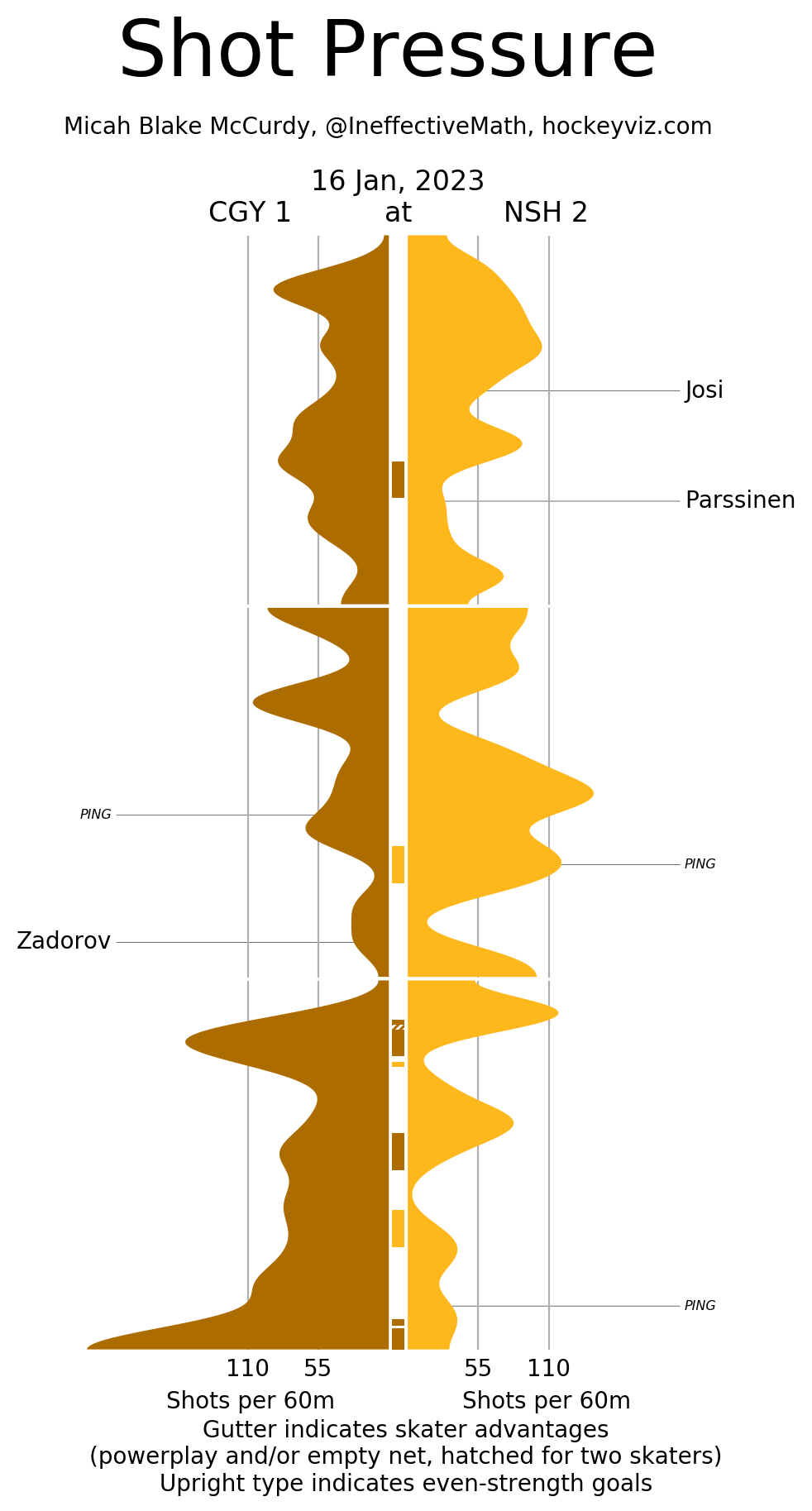 Taken By Chance – I called the Predators the Dallas Stars lite in the Betway article today and the fact they only got two goals on all those chances means they got a depth finishing problem too. Both goals had a heavy Filip Forsberg involvement – despite him getting no points on either of them. He made all the plays to get the pucks away from pressure so Nashville could establish an attack from the centre of the ice. Calgary just did that really well for two games but came out with a stinker for this game. End of the road trip and the end of a stretch of 11 road games out of their last 14 – but still these are Western Conference opponents that could battle for a wild card spot, cannot afford a no-show game.
It would be one thing if they played lights out and got beat by Saros – that is not what happened. They played very bad and very slow until about 5 minutes were left in the game.
xG Breakdown – 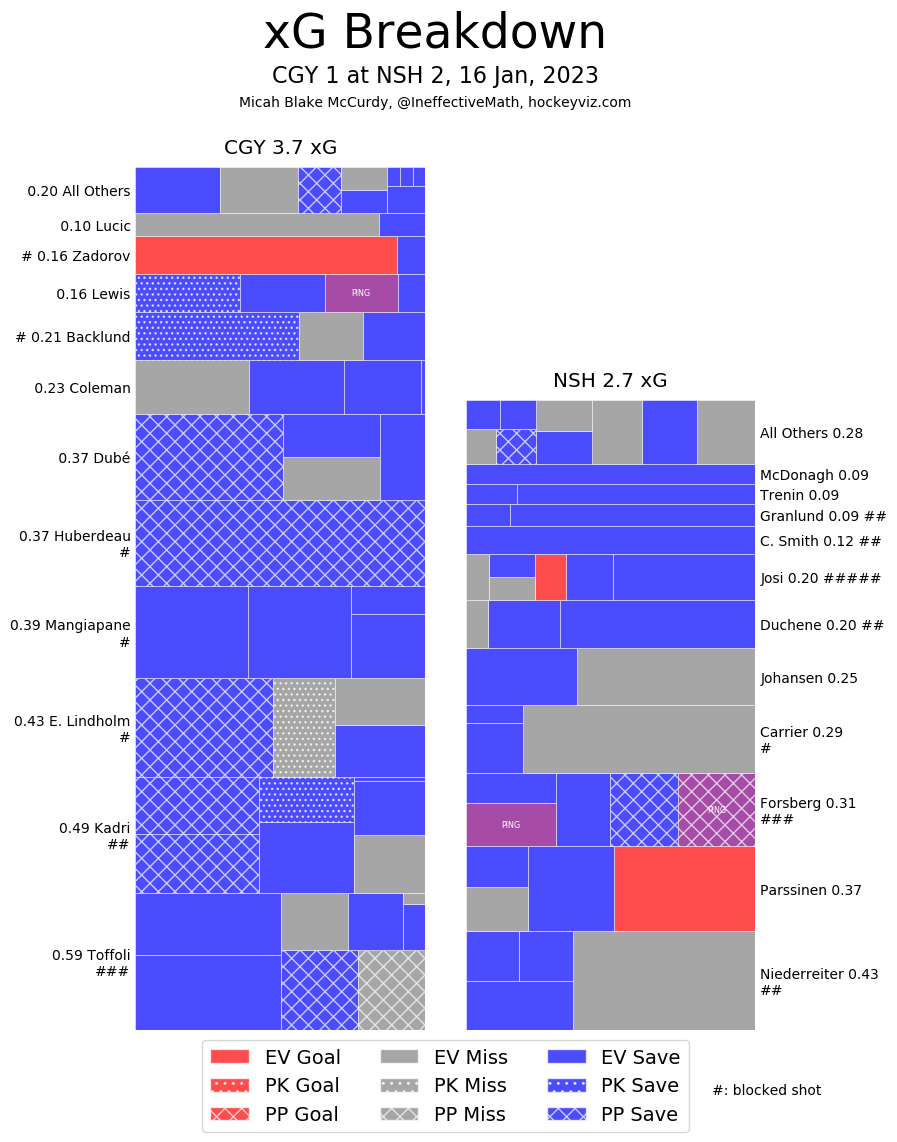 xGF% – The Predators found a quick and easy way to gain extend zone possession today – attack the slowest winger on the breakout as soon as he gets the puck. Don’t let him skate – get on him and cause a turnover. It’s how Mangiapane (48.18%) and Coleman (45.82%) always attack through the neutral zone. Today the player I saw constantly get attacked – and constantly turn the puck over – was Milan Lucic (23.52%). They caught him more than a handful of times and he just did not have the speed or the ability to stop it. Even though Kadri (18.23%) was absolutely flying out there he ended up with the worst xG ratio on the night – and I don’t have a single finger pointing at him. Jonathan Huberdeau (24.79%) was not much better – the line has performed subpar two games in a row now and that is enough to wear out its welcome with me. Just give them someone with speed – both physically and cognitively – and they’ll figure it out.
Game Flow – 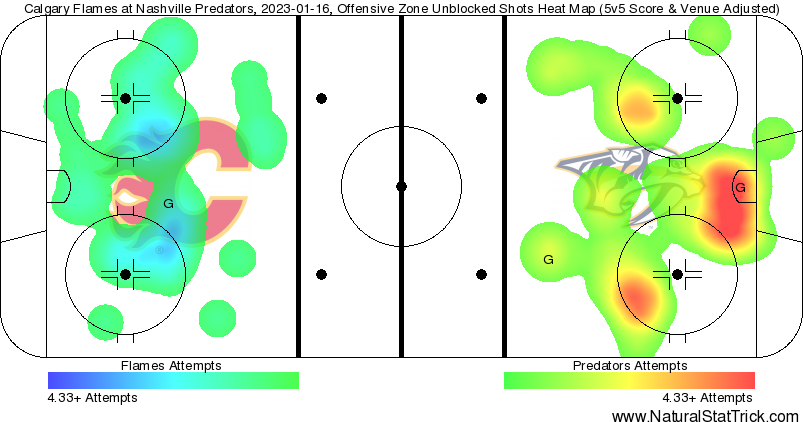 In The Crease – Get the hell out of here with the Markstrom slander. Look at the state of the shot heatmap above this and tell me he should have done more. If you do, you’re plain wrong and just being ignorant because you want the other guy in. Markstrom played better than fine – still not his sharpest self but nothing close to the point everyone needs to talk about sending him to the minors. Come back to reality and breathe a little air before those words come out of your mouths again. 3.04 expected goals against with one high danger and one medium danger getting by him. 1.04 goals saved above expected and that is just 5v5.
Today’s Specials – I honestly believe at this point you have to mix up the personnel on the powerplay. Even just make a switch from Andersson to Hanifin at this point, he might actually try and shoot wrist shots for tips instead of Andersson’s default slapper. Maybe that’s the old school in the coaches coming out wanting to see those big booming slapshots on the power play – too bad for them you’re lucky to get 8-10 of those a year. You only get that high if you’re lucky too. Calgary is the opposite of lucky and it certainly doesn’t help when Huberdeau feels forced to make some crazy cross crease pass which all lead directly to immediate zone clearings. It is in shambles and I am getting the sense there is no urgency – or care – to make any changes to it.
Player Spotlight – Jakob Pelletier – What’s the plan here guys. Just reward him with some money before you send him back down without a sniff? This was an atrocious loss and as such something should change because of it. I would hope that finding room for your almost point-per-game player – that his AHL coach raves about too – that you invested a first-round pick in would not have to struggle this hard to get into the lineup. The excuses as for why he’s not are turning into complete BS.
A team that struggles to score can’t make room to even try out a point-per-game 22 year old AHL player… makes me laugh. Did you know Jusso Parssinen, the young kid that scored tonight, was taken in the exact same draft as Pelletier? 210th overall to Jakob’s 26th – it just has to be some sort of joke, has to be.
The Goals –
Flashalytic’s 3 Stars –
1) Jacob Markstrom
2) Mikael Backlund
3) Nikita Zadorov
(Stats compiled from Naturalstattrick.com // Game Score from Hockeystatcards.com // xG and Under Pressure charts from HockeyViz.com // Game Flow and Shot Heatmap from NaturalStatTrick.com)
Editorials
Recent articles from Shane Stevenson