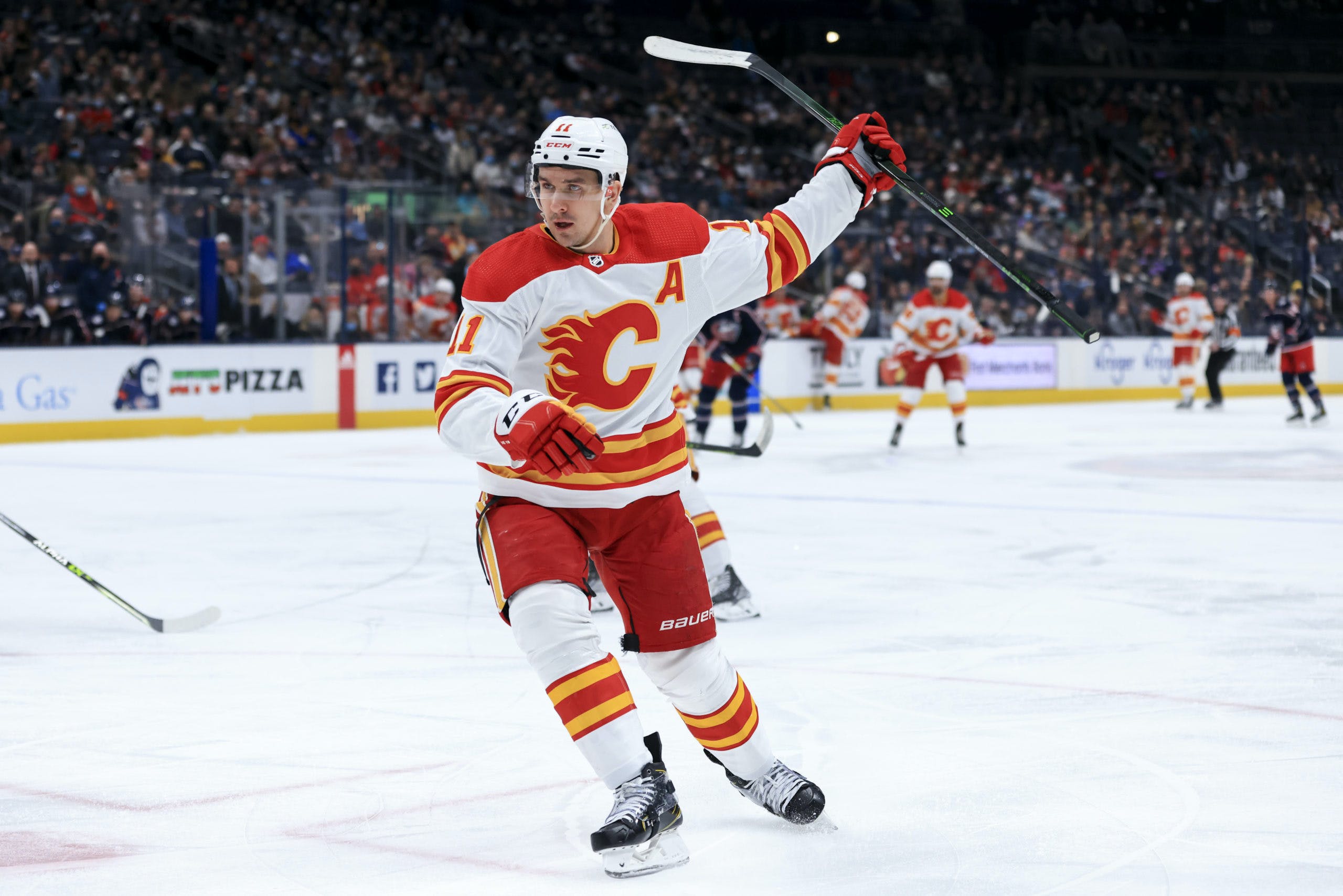 By Shane Stevenson
1 year ago
The Flames come out and play their best game of the season against the Blues and follow it up with their best game of the season against the Blue Jackets. Maybe “best” isn’t the right word because playing really close hockey against better teams brings more satisfaction, but what Calgary is currently doing is fun as heck. 13-1 in their last 120 minutes, throw in 7 points for Johnny Gaudreau and a Markstrom shutout – the party feels like it’s just getting started.
CF% – 72.55%, SCF% – 76.95%, HDCF% – 86.62%, xGF% – 83.16%
Lets kick things off with an end-to-end Johnny Gaudreau rush where he dangles the defenceman and drops the puck to Lindholm for a tap-in, shall we?
It’s a Team Game – In no way, shape, or form should any NHL team give up an expected goals ratio above 80% in any one given period. Calgary just achieved that collective ratio after an entire game. High danger chances were 15 to 3 in favour of Calgary and CBJ didn’t even register one in the third period. Back-to-back games where they ground their competition up and left them with no will to play in the third period. (STL pushed back a bit but Calgary never gave up the fight, it was too little too late. CBJ never even fought back).
Corsi King – I can’t list everyone but for the second straight game all the players fall under this category. Lowest player was Dillon Dubé (67.54 CF%) – again there are games when someone with that ratio is your BEST player. Well, at least there used to be in the past – not so much in the present with the likes of Johnny Gaudreau (75.12%) and Matthew Tkachuk (74.49%) lighting it up every night. The number one ratio belonged to rookie Adam Ružička (75.19%) who now has a career high 2 game point streak going.
Corsi Clown – For the first time in the existence of this column (Been doing variations of this for four years at various sites now) the Flames went back-to-back games with nobody below 50%. Not the only record they’ve broken on this evening.
Taken By Chance – I’m going to start all these with the lowest players, so you know how dominant they were. Dominant is a word I’ve used a lot to describe them the last few games – maybe I should mix it up. Doesn’t change the fact that it stays true – Mikael Backlund (74.01 SCF% // 65.59 HDCF%) got off the goalless streak as the low man. Again, anything over 55% is considered good, anything over 65% is great – the Flames at their worst tonight were great. Adam Ružička (79.59% // 100%), Sean Monahan (86.49% // 100%), Erik Gudbranson (77.18% // 100%), Andrew Mangiapane (83.62% // 100%), and Milan Lucic (81.86% // 100%) were the players that did not surrender any high danger opportunities.
xGF% – There are some ridiculous ratios at the top end, but if your lowest player finishes above 70% after a full game the team you just played against may be subjected to razzing about being relegated. I joke but things are not going very pleasant in Columbus lately. Rasmus Andersson (73.99 xGF%) with a spectacular number ended up at the bottom, while Adam Ružička (96.79%) saw just one very, very low danger shot against him to lead the pack. The young man has given the fourth line a new look the last couple of games – its allowed Calgary to keep having a rolling attack without surrendering an inch. He should, and most likely will, stay in the lineup for another game.
Game Flow – 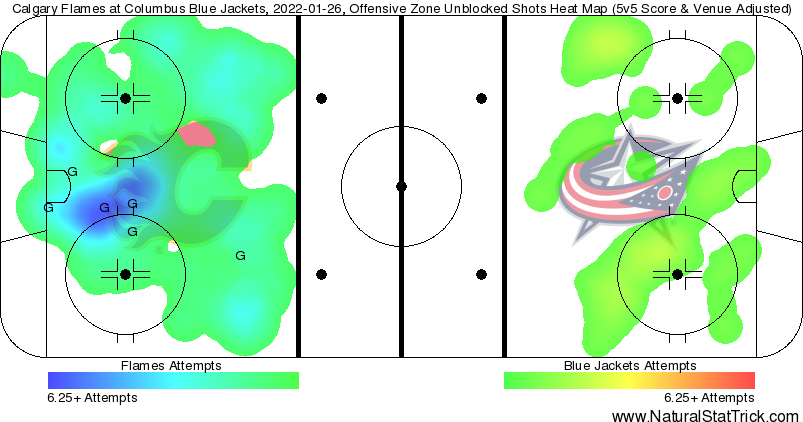 That one random spot in the middle of the ice where they did not get a shot? what gives guys. You only set the all-time record for most shots in a game in franchise history, couldn’t have added one more. They broke a record that’s been around for over 30 years tonight – 62 shots beats the old record of 59. Add in their solid commitment to defence and it has been a treat to watch.
In The Crease – 1.01 expected goals against with no goals getting past him. Only 2 high danger chances against him. Really Jacob Markström didn’t have to do much. He went for a sprint out of his crease and aggravated Jake Voracek which was entertaining. Shutout number 6 for Markstrom as he adds to his career high. It looks like he’s back.
Today’s Specials – Who needs power play goals when you have two machines that get you 5v5 points like Gaudreau and Tkachuk. They only had to kill one penalty and have been quite disciplined the last two games. Staying out of the box has largely been beneficial for a top 5 team at even strength.
Player Spotlight – Andrew Mangiapane – A road game out east, of course Mange is putting one in the back of the net. That has been his calling card in the 2021-22 season – road goals against eastern teams. Bad news is the Flames are all out of eastern road games. I myself am not worried, his home shooting percentage is bound to regress to the mean. Mangiapane is a huge X factor for the Flames if they want to make a serious postseason push. He’s going to be needed.
Flashalytic’s 3 Stars –
1) Johnny Gaudreau
2) Matthew Tkachuk
3) Erik Gudbranson
3b) Adam Ružička
The Flames don’t really have time to dwell – right back at it against the Blues on Thursday night at 6 p.m. MT.
(Stats compiled from Naturalstattrick.com // Game Score from Hockeystatcards.com)
Just a final check-in to see how the Blue Jackets are doing and, oh darn, not good it seems…