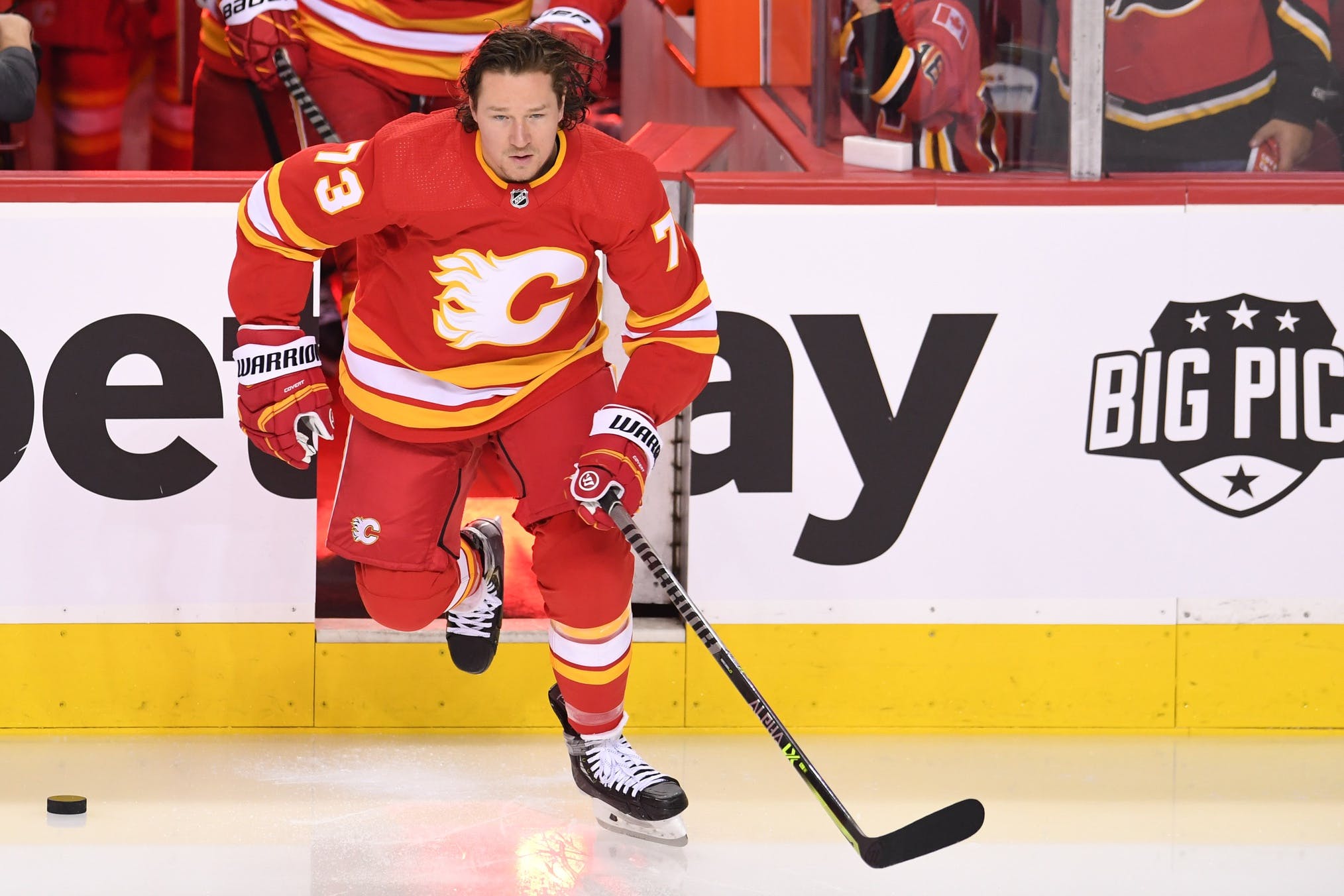 By Shane Stevenson
11 months ago
Columbus gave Calgary a solid 20 minute resistance to start. The Blue Jackets looked like a team that did not want to get shelled again like they did the time before – the problem for them is Calgary is really good and found a way to take complete control in the second period. End result was a cruise to their seventh straight victory with their shiny new guy helping them get there.
CF% – 59.79%, SCF% – 61.54%, HDCF% – 69.94%, xGF% – 61.28%
It’s a Team Game – When I tell you that after the first all these metrics were sitting close to a 50/50 split it shows how much Calgary took over in the final 40. They stick to their game plan no matter what the score is and have found ways to execute. The addition of Toffoli made the third line more dangerous despite him being on limited minutes. Coach knows it isn’t fair to just toss the player to the wolves and hope he figures it out – it’s all about everyone finding success while they help the team find success.
Corsi King – Elias Lindholm (73.67 CF%) was the man of the night with three points, he also saw the least amount of raw shot attempts against him – tied with Matthew Tkachuk (73.59%) in that regard. Great defence leads to good offence as the old saying goes. That would include the likes of Noah Hanifin (69.16%) who with partner Rasmus Andersson (68.12%) have been exponentially crucial to this winning streak. They’ve been playing at a consistently high level ever since coming out of the all-star break and it’s been tremendous to watch.
Corsi Clown – Trevor Lewis (34.52%) and the fourth line were the only members to finish on the negative side of their matchups. The Blue Jackets specifically targeted their first line against them and at times were able to get some extended zone pressures. When we break down the significance of the chances against the fourth line graded out as even so while the other team had the puck more, they didn’t do anything overtly dangerous with it.
Taken By Chance – Oliver Kylington (73.34 SCF% // 100%) is the only player who never saw a high danger opportunity against him. That skating ability of his allows him to escape many situations that others could not. In terms of high danger creation, the line that did NOT score did the best – Backlund (81.18% // 83,59%), Coleman (82.25% // 83.59%), and Mangiapane (81.07% // 80.26%) didn’t need to find the scoresheet at 5v5, but they sure tried.
xGF% – Sean Monahan (63.91 xGF%) got the first chance reunion with his old junior linemate Tyler Toffoli (63.35%). Dillon Dubé (63.31%) got off his drought shorthanded but was still a solid contributor to this line as well. More practice time will see more chemistry appear and the Flames are just that much deeper in their top 9 with Toffoli in the mix. Oliver Kylington (76.86%) and Blake Coleman (72.97%) finished as 1-2 on this night.
Game Flow –

Of late most teams have fallen into an early deficit in terms of overall xG when playing Calgary. Columbus was able to keep things semi-level through one which was the biggest surprise of the day. Calgary sticks to their strategy no matter what and at this point they’ve found so much success in dling so that they may never stop. This team knows they can beat anyone – and they knew that before they got the proven goal scorer.
Game Score – To no surprise the man with the 3 points comes away on top – Elias Lindholm (3.06 game // 1.42 average). Nikita Zadorov (3.00 // 0.58) has found a new gear of late, he’s really settled into the role given to him and it’s allowed his pairing of him and Gudbranson (2.80 // 0.49) to have some really strong impact games. I’m glad both of those players were able to find effective fits here in Calgary – we may predict some bad numbers sometimes, but we ultimately do want every player signed to succeed. So far both Zadorov and Gudbranson have come better than expected. Johnny Gaudreau (2.53 // 1.78) and Matthew Tkachuk (2.04 // 1.67) round out the 2.00 and up crowd.
Shot Heatmap – 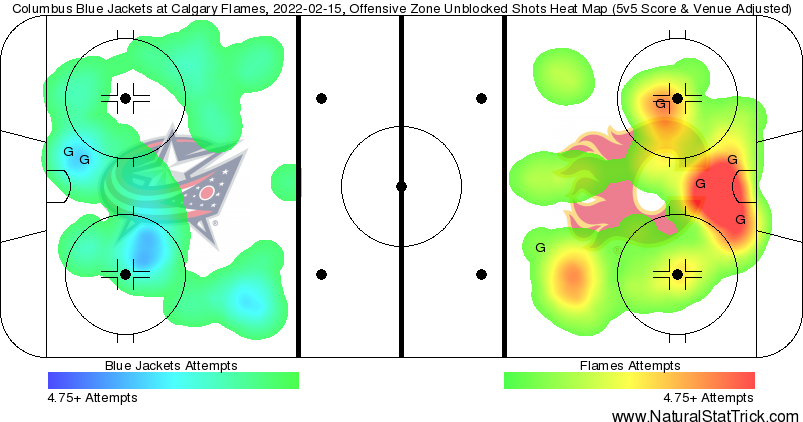 In games so one-sided the heatmaps are my favourite thing to look at. You can clearly tell based on quality and location (and volume) of chances which team deserved the win. Columbus is a non-playoff team this year and Calgary beating them was something that should happen more often than not.
In The Crease – Dan Vladar! I honestly thought by this point of the season I’d have got to talk about the young man more – especially after the start he had – but it’s been a Markstrom run for a long time. The team in front of him was solid in defending tonight and Vladar did his job only allowing 2 high danger goals against on 1.95 expected goals at 5v5. He didn’t need to be fancy tonight to get the win just needed to get the job done – hopefully this means more trust and faith in the backup going forward so Markstrom can earn some rest.
Today’s Specials – Dillon Dubé made the right choice in shooting the puck on that shorthanded chance. Let the defender play the pass, try and beat the tendy if you fancy yourself an offensive forward. Dubé more than has the toolkit to be a regular contributor to the offence and I’m hoping adding Toffoli and giving him a more offensively minded linemate than Brett Ritchie every night (Brett can still do all the little things correctly and is a good depth option). Whether that linemate be Toffoli himself or one Mang/Coleman, Dubé looks like he’s getting a linemate boost either way. (Him being here and not traded is a massive W, for what its worth)
Player Spotlight – Tyler Toffoli – What a darn goal that was. Talk about memorable firsts – he uses his hustle to grab the lob pass from Gaudreau (dirty itself – I see you Johnny) and does what the numbers say he was going to do, charge the net. Toffoli will continue to drive the net because he’s a guy that knows what area of the ice gets you the most goals. Anyways, Toffoli makes a great forehand to backhand across-the-body drag that Merzlikins got none of. He out-waits the tendy after that and tucks it into the yawning cage – welcome to the C of Red Mr. Toffoli – enjoy the name chants from the crowd.
Flashalytic’s 3 Stars –
1) Elias Lindholm
2) Johnny Gaudreau
3) Nikita Zadorov
The Flames continue their quest to extend their streak against the Anaheim Ducks on Wednesday night at 7:30 p.m. MT.
(Stats compiled from Naturalstattrick.com // Game Score from Hockeystatcards.com)