Beyond the Boxscore: Can anybody spare some goals? 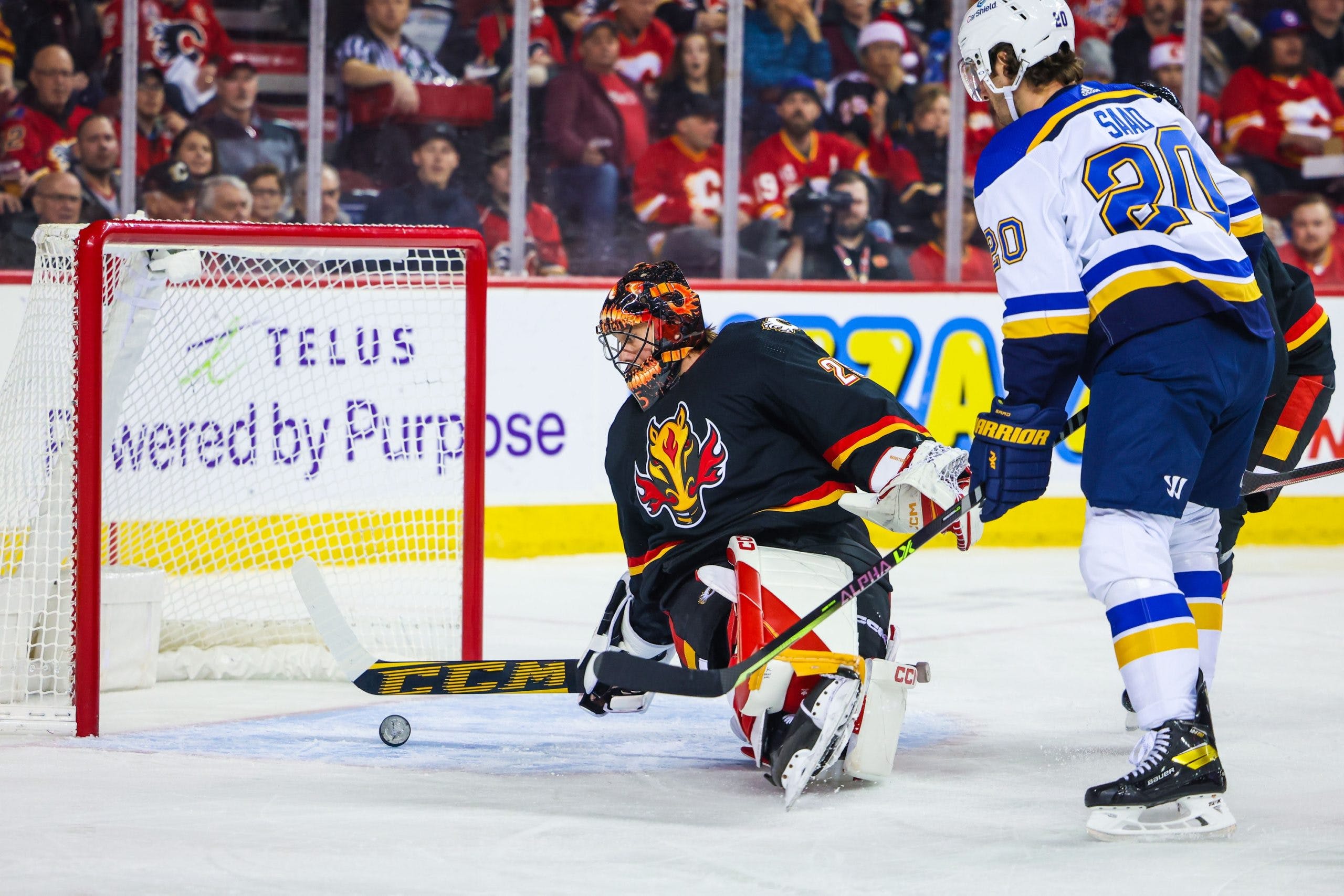 By Shane Stevenson
1 month ago
It was another game played from behind predominantly the entire match as Calgary let a two-on-one in the opening minutes, leaving their goalie out to dry immediately. Defensive coverage was constantly lacking, pass receptions are at a novice level, and nobody wants to get their shoulders brushed trying to drive the net from down low. What good is having a team of guys built like big strong farm boys if they play like a bunch of timid puppy dogs when it comes to try and score goals from the hard areas in the middle of the ice. Get to the net or book your tee times now.
CF% – 61.48%, SCF% – 50.58%, HDCF% – 38.36%, xGF% – 50.82%
It’s a Team Game – Corsi is still up which means they are possessing the puck enough to get plenty of shots, but they are about as dangerous as a defanged, venom-drained cobra. New line combinations were put into play and some more games to find chemistry are going to be necessary. Tonight though, the onus is on everyone – shoddy defensive coverage and bad backchecking efforts from both forwards and defencemen. The missed passes are the worst part of it for me, especially when they are within an arm’s reach on the inside of their own blue line. Hard to have a transition game if the passing out of their own zone isn’t at an NHL tier. This is an area of the game where no matter how Connor Mackey, Michael Stone, Nikita Zadorov, or any of the call-ups try they can’t reach the passing level that Oliver Kylington employed. That is an opinion of mine, but I will be looking into successful zone exit numbers soon to try and back it up. (I very well could prove myself wrong, but I doubt it).
Corsi King – Radim Zohorna (79.97%) didn’t hardly see any chances against this game. He’s constantly had above average performances In the fourth line centre position and deservedly should hold it for a while. I do not think it much of a stretch to say Connor Mackey (78.99%) had the best NHL game of his career with solid CF%, SCF%, HDCF%, and xGF%. I’m about to get to the insane part about this game – nobody finished below 49%. Huberdeau (49.34%) was the lowest Flame for the night. If you frequently read BTB than you know I set the minimum standard usually between 46-47% for individual games. In this sad defeat every single Calgary player saw more shots go towards Greiss than towards Markstrom. This is why it is constantly good to remind everyone that no one stat determines anything.
Corsi Clown – They all get off on a technicality.
Under Pressure – 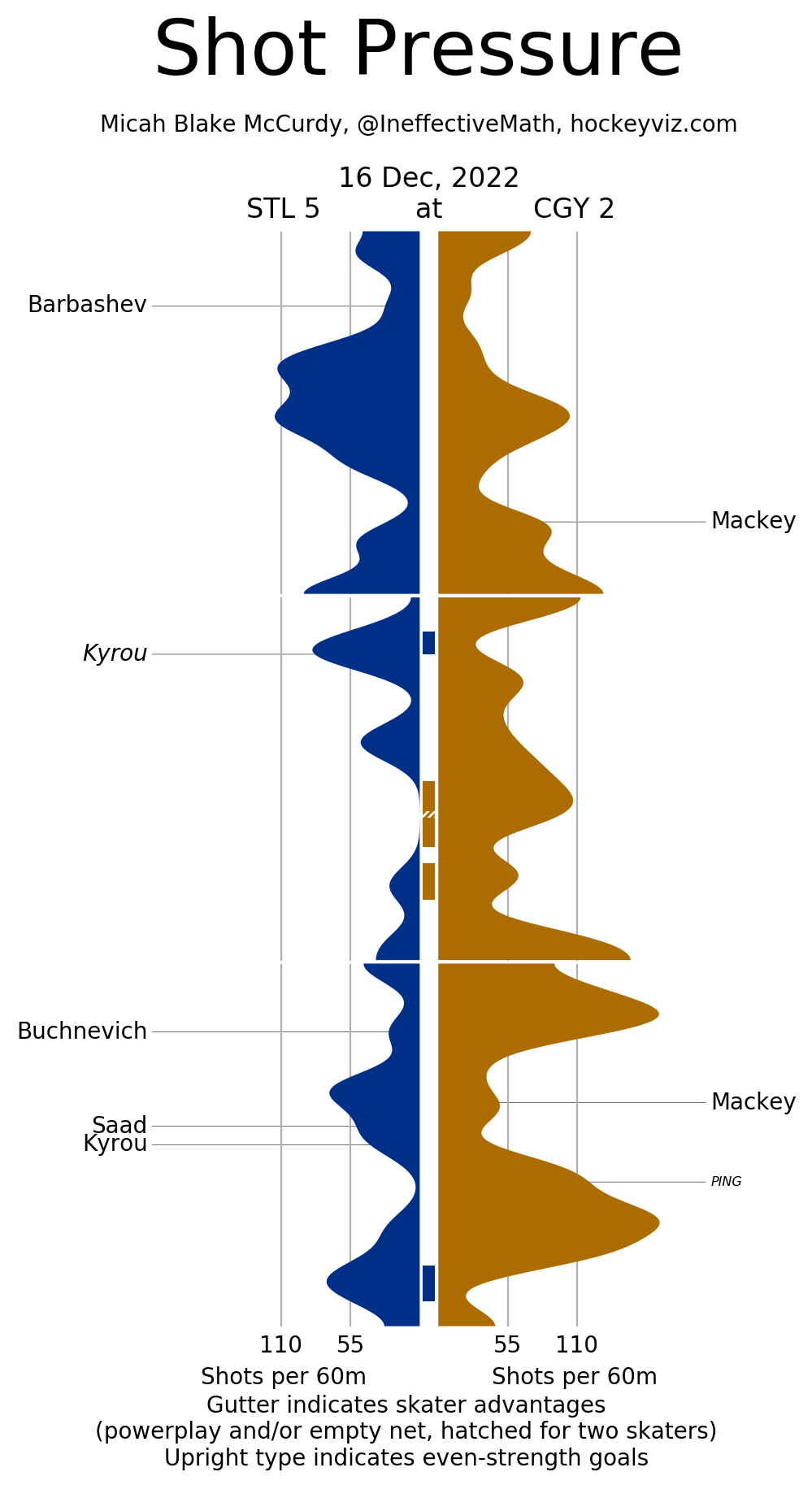 The Flames really got outscored 1-0 in that second period where they controlled everything. Man that would be pretty deflating.
Taken By Chance – Here is where you’re going to see the pitiful effort from the team. My line combination of Huberdeau (37.37 SCF% // 23.81 HDCF%), Kadri (38.32% // 20.80%), and Mangiapane (38.32% // 20.80%) did not have a good night limiting high danger chances. Between the Flames top two D pairs here’s the raw HDCA numbers for each of them (5v5 SVA): Zadorov – 7.69, Weegar – 6.63, Andersson – 5.54, and Hanifin – 4.48. There were so many blunders from all of them in their coverages tonight. It might be one of the worst defended slot games in the Darryl Sutter 2.0 era. The centers/wingers and their backcheck are also to blame – if you aren’t going to hustle and try and narrow off the puck carrier as they enter the zone, they are going to find a ton of space and chances once they’re past the blue line. This means getting back and driving the puck carrier towards the boards starting at the red line at the latest. More hustle in that aspect is a need, not a want.
xG Breakdown – 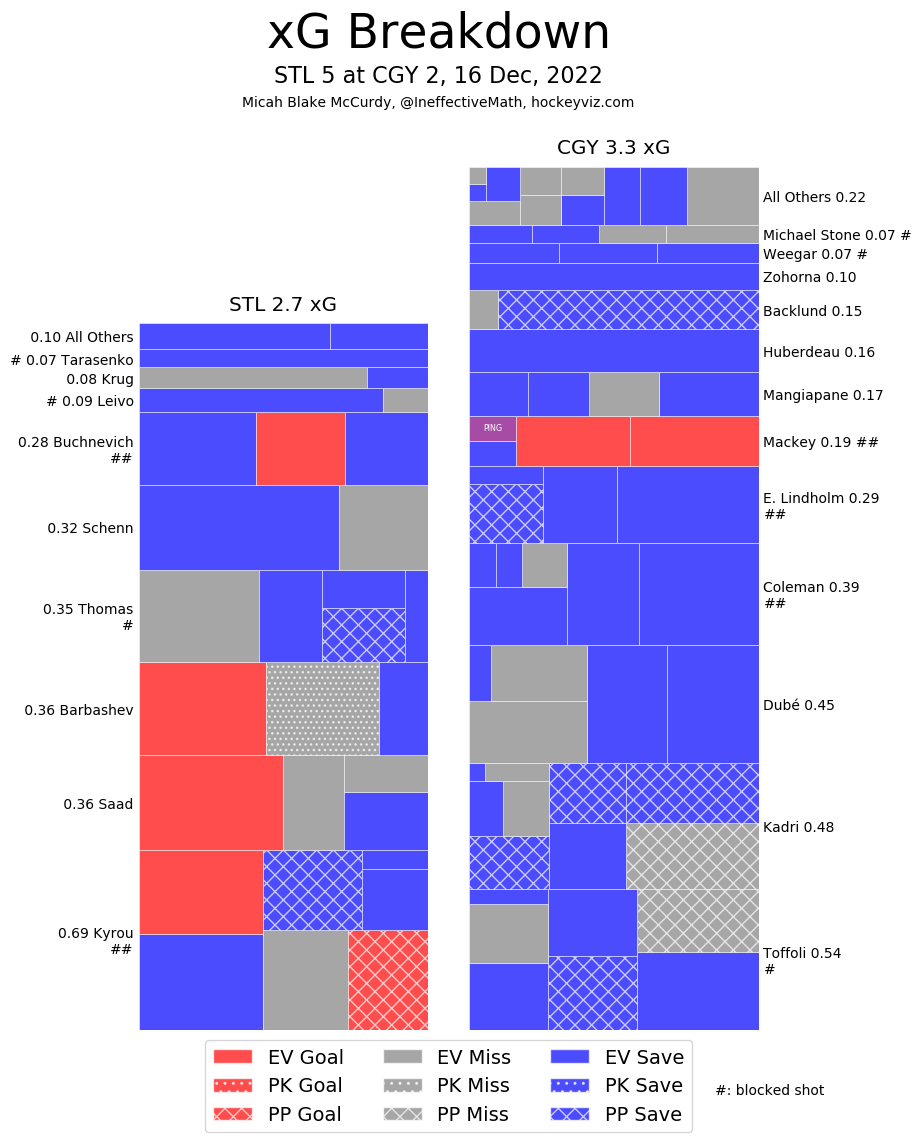 xGF% – Benching Adam Ruzicka (73.37%) at this point is something that needs to be addressed. He has been the Flames best expected goals contributor this season. I’m checking Evolving Hockey right now as I type this, and his average is 59.55% but instead in this game he was benched for Milan Lucic (42.65%) whose xG rate is the worst on the team. So, you benched the Flames best offensive creator down two goals for their worst offensive creator. I’m not making that up – statistically that is exactly what happened. This is indefensible no matter what the explanation.
Game Flow – 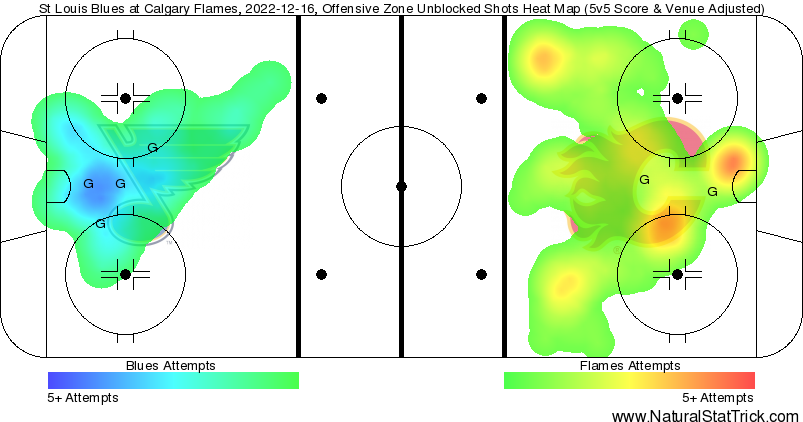 In The Crease – Would it be nice not to let a goal against happen in the first five minutes? Yes. Can Markstrom stop the bad turnovers occurring outside the defensive zone to prevent the two-on-one from happening? No. We can pile on him when the team plays good and he lets in weak goals, but when the coverage in front of him is atrocious we should also let him off the hook. 2.10 expected goals against at 5v5 with three high danger and one medium danger goal getting behind him.
Today’s Specials – Maybe if we switch which coach runs the power play? I don’t recall Habs fans being too thrilled with how Muller ran theirs. Anyways the Flames power play continues to suck.
Player Spotlight – Dillon Dubé – He’s doing that thing where he starts to pay decent hockey again. It usually follows with a bunch of goals in a short stretch and then back to silence for the better part of a month. He’s just brimming with all this potential and it never seems to stay after you see it shine. It’s almost like after he’s been shined up he goes mudding that weekend and then doesn’t wash the truck for three weeks. Got to start stopping by that car wash once a week at least Mr. Dubé.
The Goals –
Flashalytic’s 3 Stars –
1) Connor Mackey
2) Adam Ruzicka
3) Radim Zohorna
The Flames just keep losing. Five in a row. They’re back in action on Sunday in San Jose.
(Stats compiled from Naturalstattrick.com // Game Score from Hockeystatcards.com // xG and Under Pressure charts from HockeyViz.com // Game Flow and Shot Heatmap from NaturalStatTrick.com)
Editorials
Recent articles from Shane Stevenson