Beyond the Boxscore: Flames go back and forth with Wild and come out winners 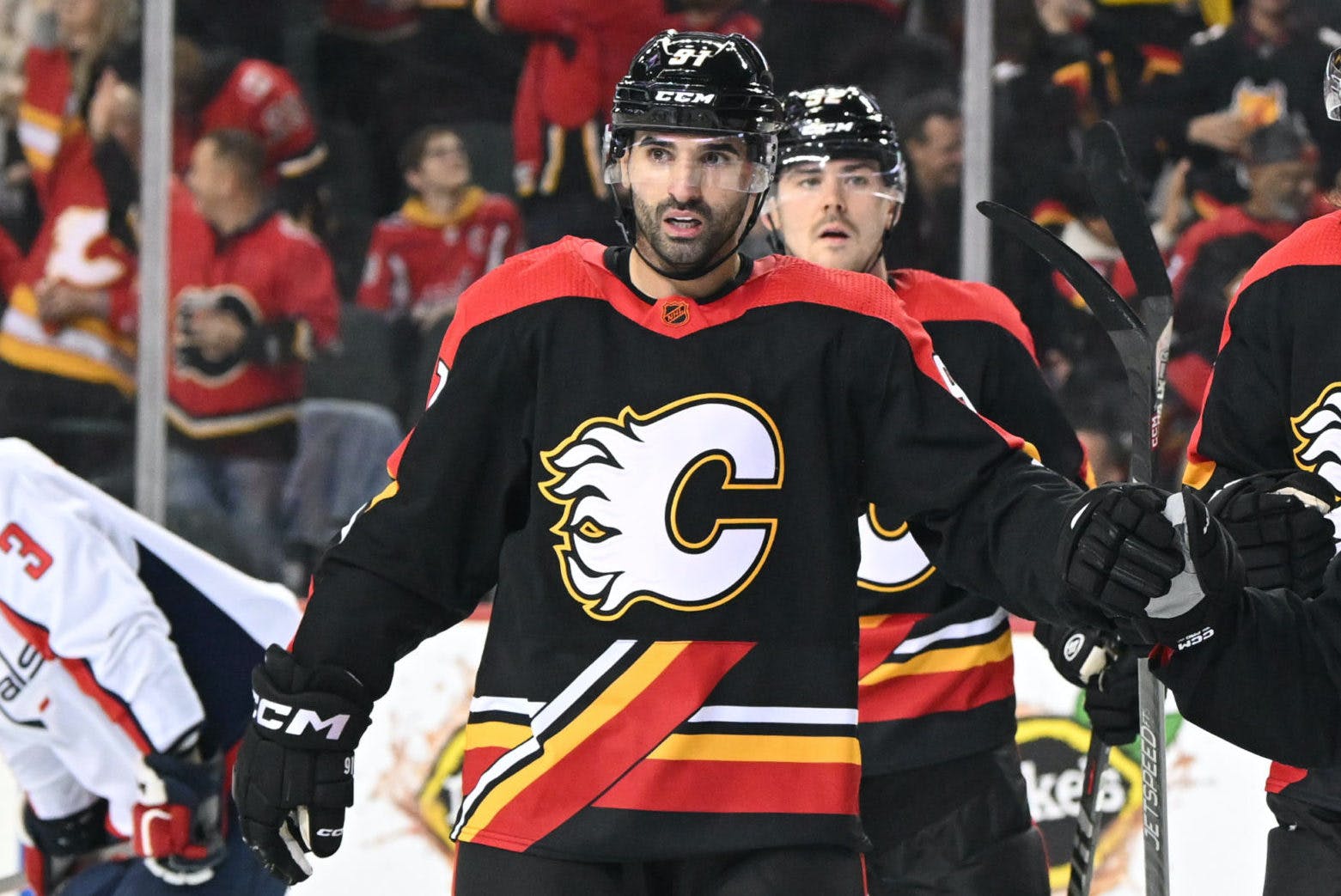 By Shane Stevenson
1 month ago
The Flames fell behind early, and I mean really early, before battling back and earning a win. The Wild pushed Calgary more than they had in recent games and it resulted in an early 2-0 lead for the visitors. That would hold up until the end of the first period where the tides turned, and Calgary came out (starting on the power play) and put three goals by Fleury in quick succession. That was the theme of the night because seconds after John Merrill tied it at 3 Andersson gets the puck in the slot and rips it home. Toffoli adds one more and that’s how you get to a 5-3 final.
CF% – 44.38%, SCF% – 37.38%, HDCF% – 41.22%, xGF% – 42.68%
It’s a Team Game – Now there was a boatload of special teams breaking play up all over the place. Hard to judge any real flows outside the Flames settling down after the Wilds quick two goals and a couple stretches in the third to end the game. The third period Calgary figured the Wilds 5v5 attack out a bit and was able to limit them to no high danger chances. The Merrill goal was quite unfortunate so it was a nice reward for some hard work in the third to get it right back.
Corsi King – Jonathan Huberdeau (66.10 CF%) only was able to muster up the one assist but his center Elias Lindholm (56.97%) collected three apples. Them and Michael Stone (51.30%) and to an extent partner Zadorov (49.93%) were all that finished above 50%. Overall quantity isn’t always the answer, we’ll see that when we examine the quality of the attempts.
Corsi Clown – Trevor Lewis (30.34%) was easily the lowest, but I do put a disclaimer in that he kills penalties and sometimes can be out there when the penalty kill ends – that did happen once in this game. It’s very hard to be the guys to swing momentum back, lines are mixed up and things are a bit chaotic when nobody scores. Lots of goals happen in that timeframe because of such confusion, the team that had the power play usually gets a few extra decent looks at worst and those count towards the 5v5 counting numbers. Coleman (36.71%) and Ružička (37.07%) were not heavy possession favorites like they normally are together.
Under Pressure – 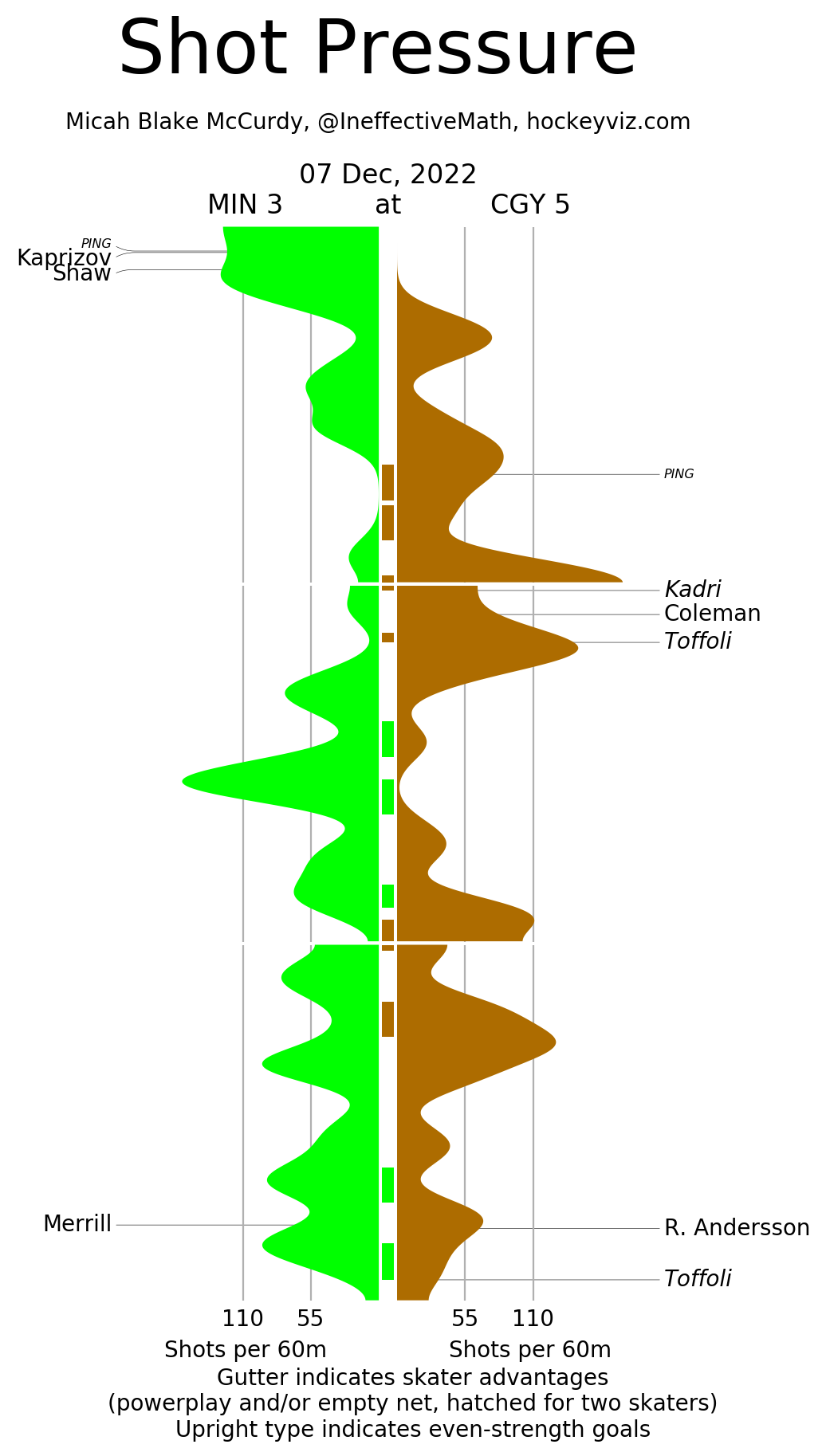 Taken By Chance – See this is where we can tell you that despite getting out chanced in overall attempts some players still found significantly better opportunities in terms of quality. Noah Hanifin (43.42 SCF% // 63.33 HDCF%) and Rasmus Andersson (42.85% // 63.33%) are the prime examples. They spent more time in their own zone but made the time they were able to get in the offensive zone count for more. They maximized their opportunities, and it paid off with them being out there for both of the Flames 5v5 goals.
xG Breakdown – 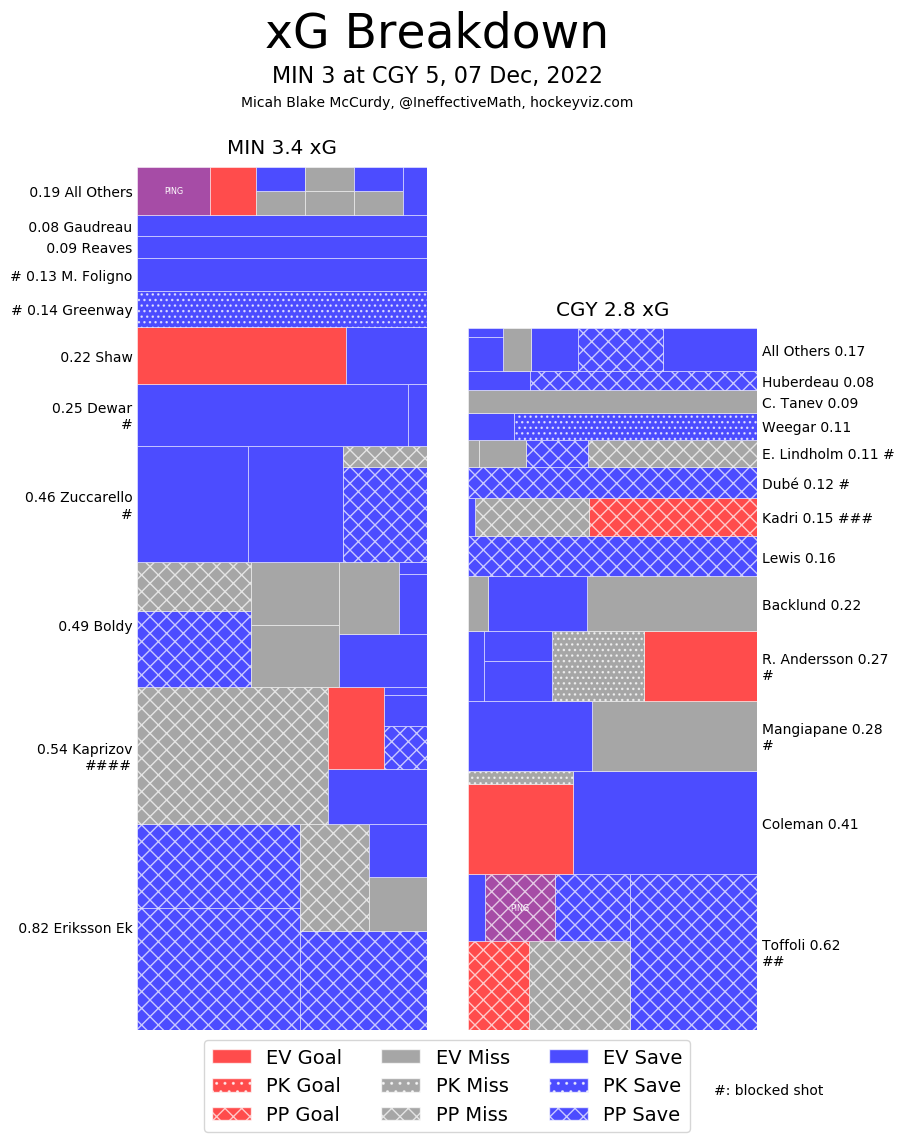 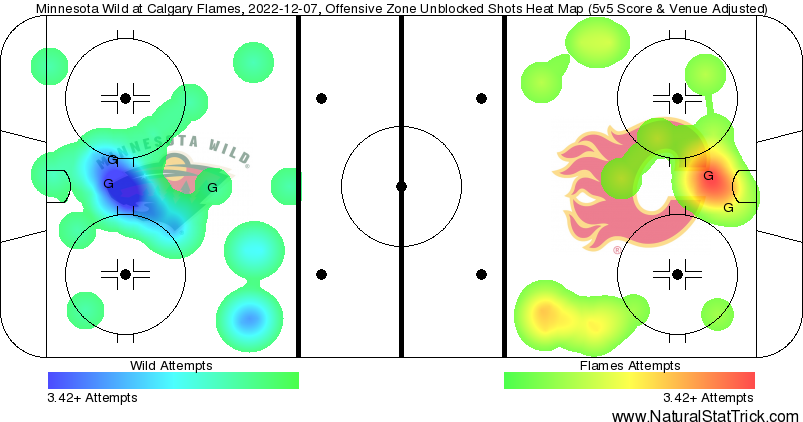 worth pointing out one significant thing about these heatmaps. Yes the Wilds is certainly larger, being they had more attempts, but look who was closer to the goal line. There’s your quality folks – as little as a foot of distance changes the probability of a goal a significant amount.
In The Crease – Enough to get the job done but not his best performance. That’s not a slight – more of an observation, I fully believe Vladar was a big reason Calgary was able to get the W. He shut the door on the PK all night despite the Wild getting some nice looks from in tight. 5v5 wasn’t the best but he more than made up for it with the special teams performance. I would say now is the good time to go back to Markstrom for a game and see what he can do, give Vladar a night off before the second back-to-back against a really good Leafs team Saturday night. If Markstrom shows well against the lowly Blue Jackets – who will be looking to avenge a 9-4 loss to Buffalo suffered last night – then that’s a step in the right direction for him.
Today’s Specials – I got super critical of the power play at the first intermission – not unusual for me if I’m being honest. Then the Flames come out to start the second period doing everything I wanted to see from them and made me eat my bad takes. I could not be happier that happened. No reason to complain if they directly answer the complaints 10 minutes after I scream them into the internet void, so I won’t. Good power play boys, and A+ to the PK units.
Player Spotlight – Michael Stone – I’ve been fairly positive all review so it’s going to feel extra mean I’m pointing out one flaw that happened one time during the whole game. The early odd man rush to start the game Stone had no idea who to cover – poor guy was completely lost. We used to see that happen under previous coaches all the time, part of the reason the results have improved so much over the years is Calgary playing better as a team to nullify odd man rushes against. It involves full buy in from the forwards and especially the centers, they need to be back and pressuring (or checking) their man. Michael Stone doesn’t always do that, he does the right thing way more than the wrong thing – like I said I just happened to notice it tonight.
The Goals –
Flashalytic’s 3 Stars –
1) Elias Lindholm
2) Mikael Backlund
3) Rasmus Andersson
The Flames next game will see them take on Johnny Gaudreau and the reeling Columbus Blue Jackets, Friday at 5 p.m. MT.
(Stats compiled from Naturalstattrick.com // Game Score from Hockeystatcards.com // xG and Under Pressure charts from HockeyViz.com // Game Flow and Shot Heatmap from NaturalStatTrick.com)
Editorials
Recent articles from Shane Stevenson