Beyond the Boxscore: Flames scrape together just enough to steal a point from Kings 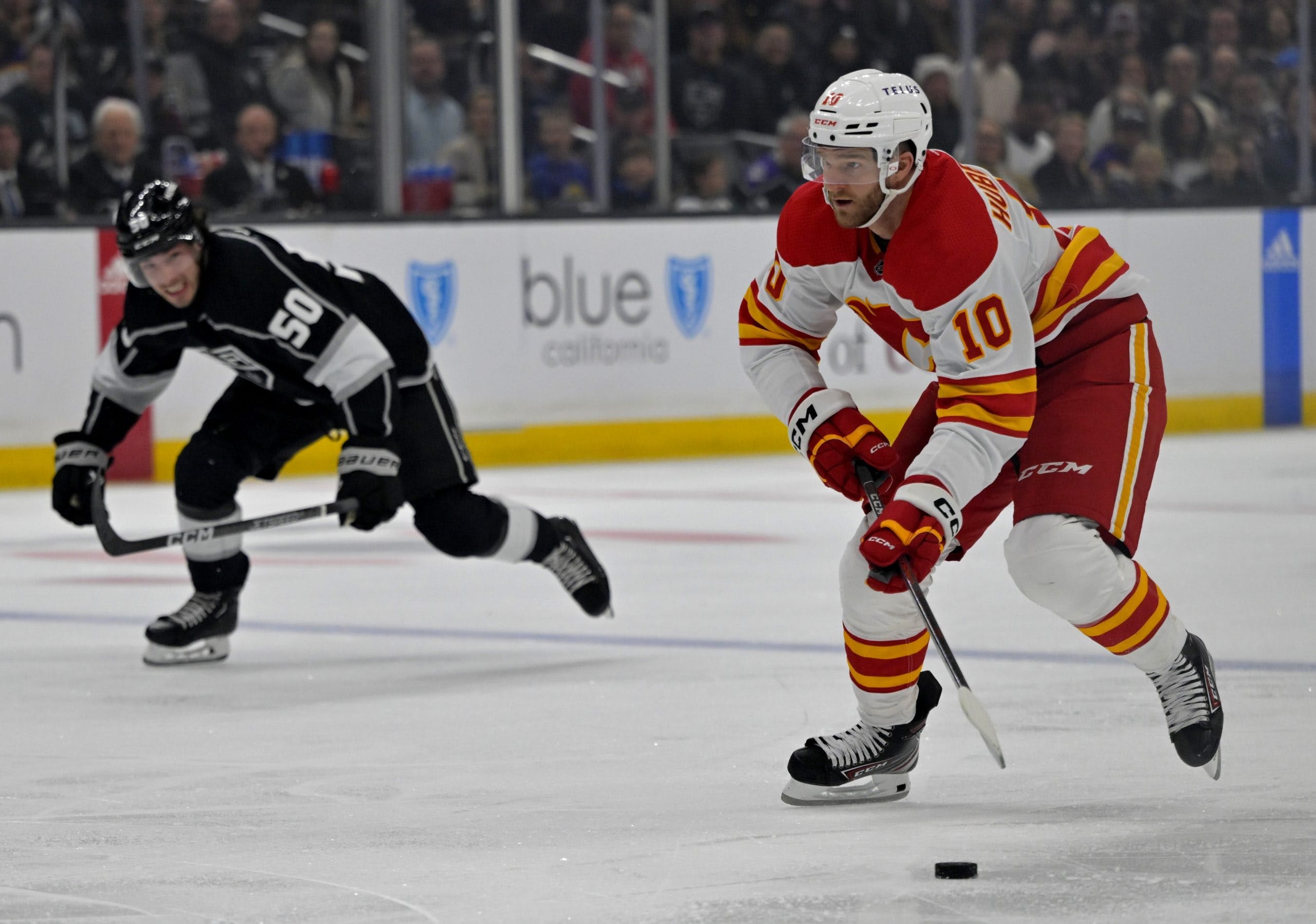 By Shane Stevenson
1 month ago
A full team effort to crawl back and get a point ended in a loss as the overtime frame got the best of them yet again. A very physical game that saw the Calgary Flames throw the body out early and often. Credit to the Los Angeles Kings for never going away or backing down and instead keeping their attack coming whenever they had the opportunity to create offence. There were some clear standouts in a positive sense and some players that were quiet in a negative sense, lets dive in.
CF% – 52.36%, SCF% – 49.12%, HDCF% – 42.34%, xGF% – 51.36%
It’s a Team Game – It was a stronger start for Calgary and a more pressing finish for the Kings. Sometimes we see momentum swing back and forth in giant waves, this game was just on a per period basis. Calgary took it to the Kings for a stretch in the late second but were shell-shocked by the Kings two quick goals in the third. The Tying goal wasn’t from a strong stretch of dominant play rather just a skilled player making a very skilled play in Hanifin.
Corsi King – Andrew Mangiapane (73.57%) with the instant-working line of Coleman (62.34%) and Backlund (61.27%) led the team. Rasmus Andersson (61.79%) and Noah Hanifin (61.06%) also spent way more of the game getting chances rather than getting them. I like to see at least one line and one D pair lead to great extents – it shows they were the team pace car that night. The Flames went at 5v5 as these guys went – a lot of play really ran through Noah Hanifin.
Corsi Clown – Dillon Dubé (26.81%) and company did not spend much time out of their own zone. Lindholm (33.64%) and Toffoli (37.83%) included. The good done by the Hanifin-Andersson pair was a bit undone by Weegar (35.96%) and Tanev (40.19%) getting stuck in their own zone. Not characteristic of those two players at all.
Under Pressure – 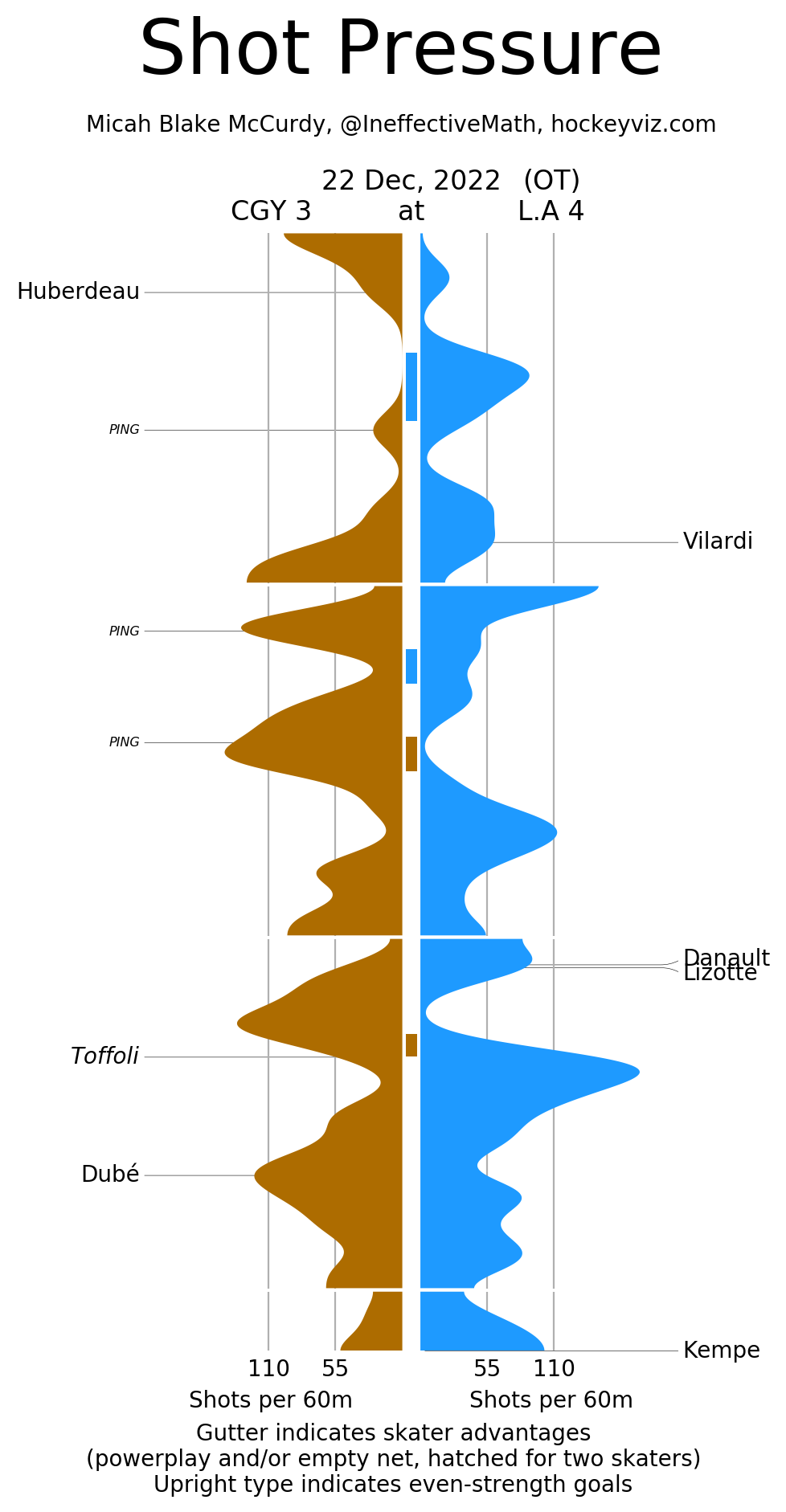 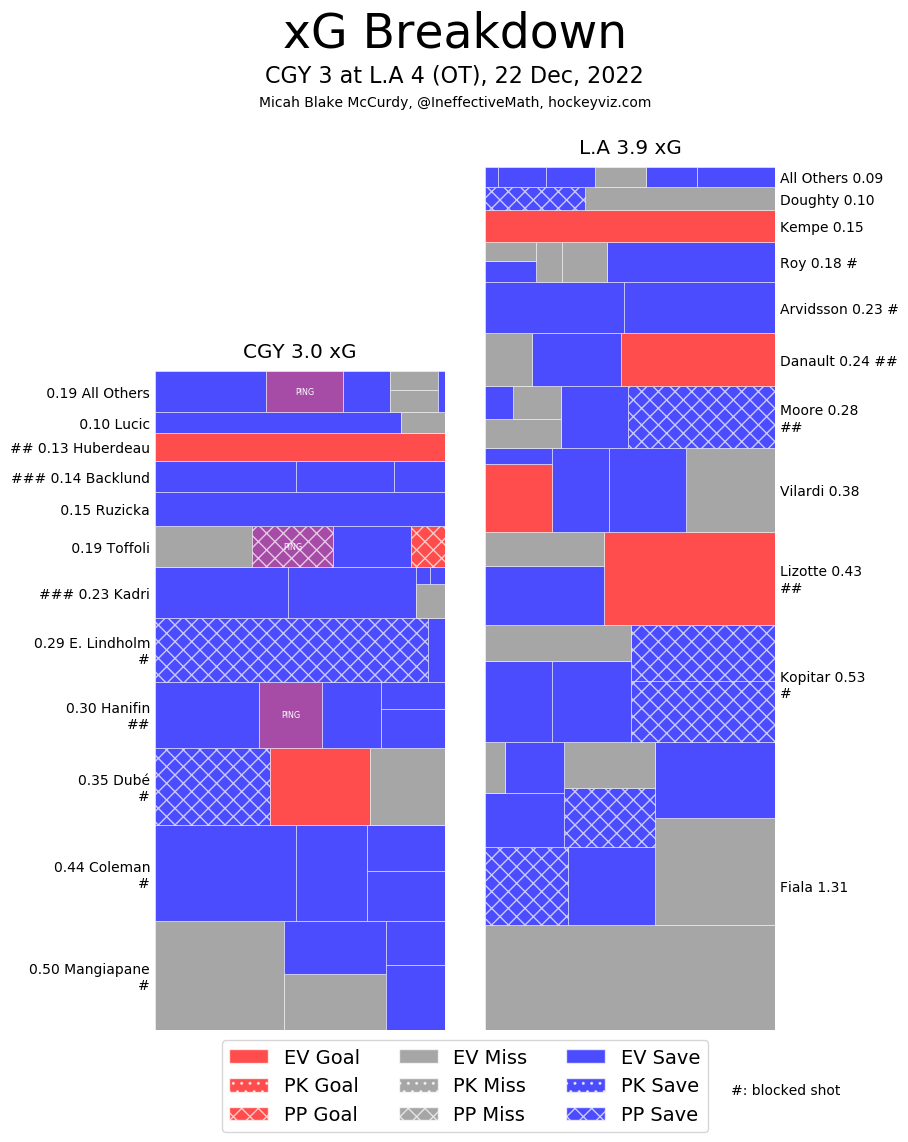 xGF% – I think the Flames are really starting to mismanage Adam Ružička (40.28%). He got benched and fell down the lineup – to which many are blindly shouting their agreeance with – and I frankly don’t see it. He was way more effective riding shotgun with another centre playing off their positioning on the walls to get good scoring chances from the middle of the ice. Putting him with other players that don’t compliment his offensive skillset and mindset is just doing his growth a disservice. We’ve seen consistent greatness in him – taking minutes away from him does not groom that in my opinion.
Game Flow – 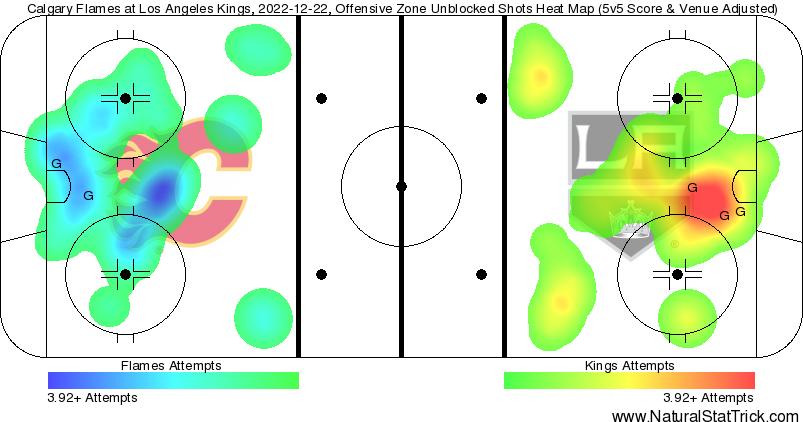 In The Crease – Vladar was really strong early and was a massive reason Calgary didn’t chase the entire game and only for part of the third. 2.50 expected goals against with all three goals against being high danger. He didn’t let in any weak goals and gave his team a chance to win – like he’s done in pretty well every game he’s played this season.
Player Spotlight – Noah Hanifin – I want that version of number 55 every single night. The puck touched his stick in the third period, and he was the most dangerous man on the ice. Making plays to the net and fantastic passes like the one that led directly to Dubé getting a tap-in. It was almost like the coaching staff freed him from some of his responsibilities defensively and he went on an offensive tear. He’s always been one of the top creators of xG on the roster and if the Flames can realize the unbottled offensive potential he has dormant within him and play to those strengths they could generate a lot more offence.
The Goals –
Flashalytic’s 3 Stars –
1) Noah Hanifin
2) Andrew Mangiapane
3) Dan Vladar
The Flames complete their pre-holiday road trip on Friday night in Anaheim.
(Stats compiled from Naturalstattrick.com // Game Score from Hockeystatcards.com // xG and Under Pressure charts from HockeyViz.com // Game Flow and Shot Heatmap from NaturalStatTrick.com)
Editorials
Recent articles from Shane Stevenson