Beyond the Boxscore: Flames snuffed out by Lightning 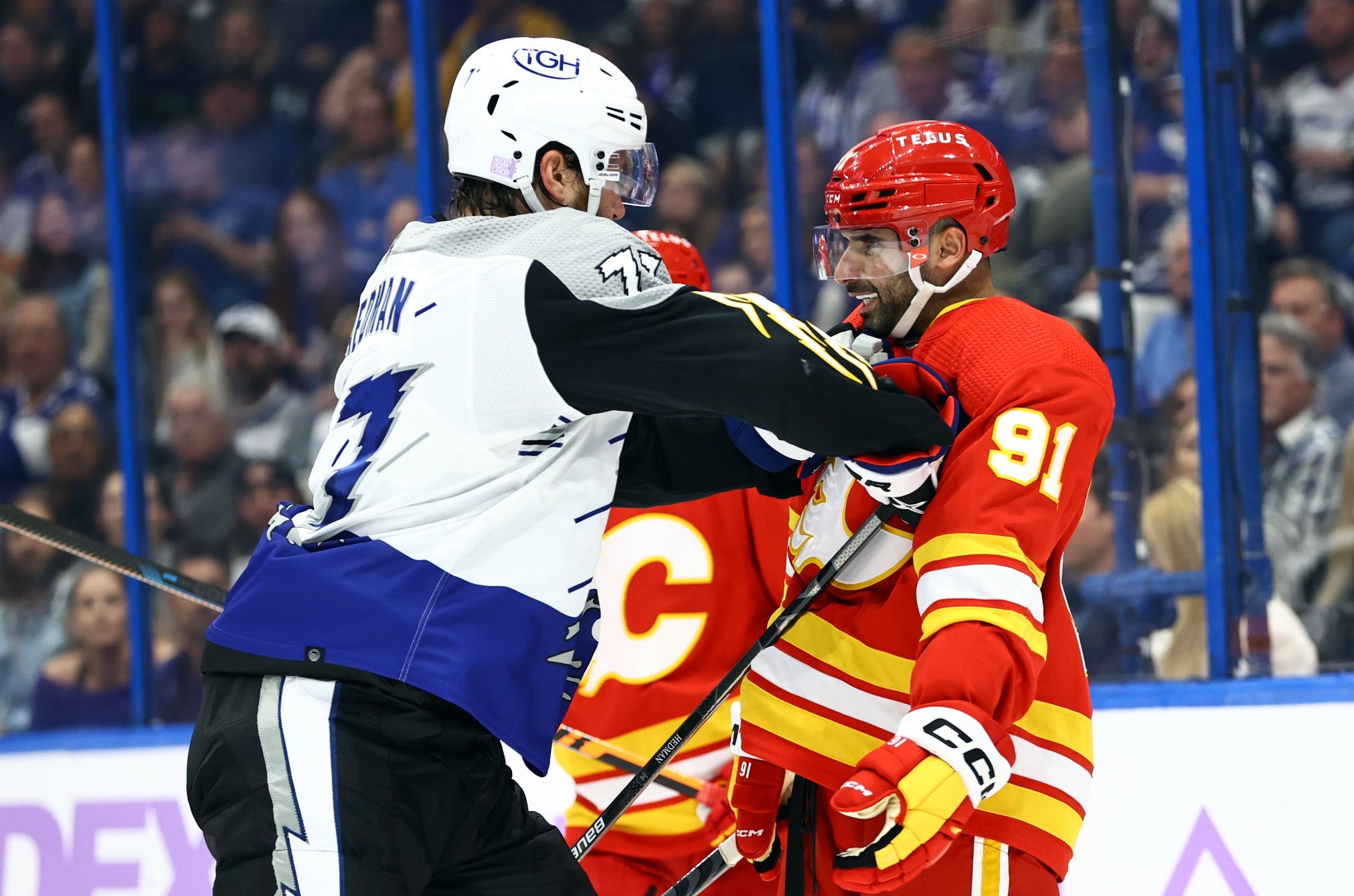 By Shane Stevenson
12 days ago
No need to beat around the bush here, from a Calgary Flames fan perspective that game was a little boring. Any time a team controls puck possession but can’t get any high danger chances the game seems to go a lot slower. There weren’t too many crazy scoring plays or any 5 alarm saves, just a game where Tampa let Calgary play along the perimeter and counter struck when they could. The game went exactly the way Tampa could have hoped and Calgary goes back into the loss column.
CF% – 60.49%, SCF% – 52.01%, HDCF% – 22.63%, xGF% – 41.85%
It’s a Team Game – Calgary had multiple attempts at a push back they just could never turn anything into a significantly dangerous chance. Whenever they did get something, decent Vasilevskiy was playing like his old dialed in self. Calgary was doing the right things sometimes you run into a team that a) knows how to play and b) can execute their gameplan. The Tampa Bay Lightning were not to be outdone wearing those sweaters.
Corsi King – How zone deployment can help – Dennis Gilbert (100 CF%) lead the way without seeing a tangible scoring chance against, or even a quantified attempt. Gilbert was used like DeSimone the game before – sporadically and not always consistently. Brett Ritchie (74.47%) with linemates Dubé (73.23%) and Coleman (67.57%) spent a lot of their time attacking despite little to show for it. Overall, the entire team will grade alright here because they did keep getting shots and shot attempts, they just weren’t very dangerous.
Corsi Clown – Milan Lucic (44.16%) has his first goal in what feels like forever taken back on an offside review (it was offside though, so). He and Andrew Mangiapane (44.34%) were the only ones low here – when we look at high danger chances and expected goals, we’ll see there wasn’t too much to celebrate.
Under Pressure – 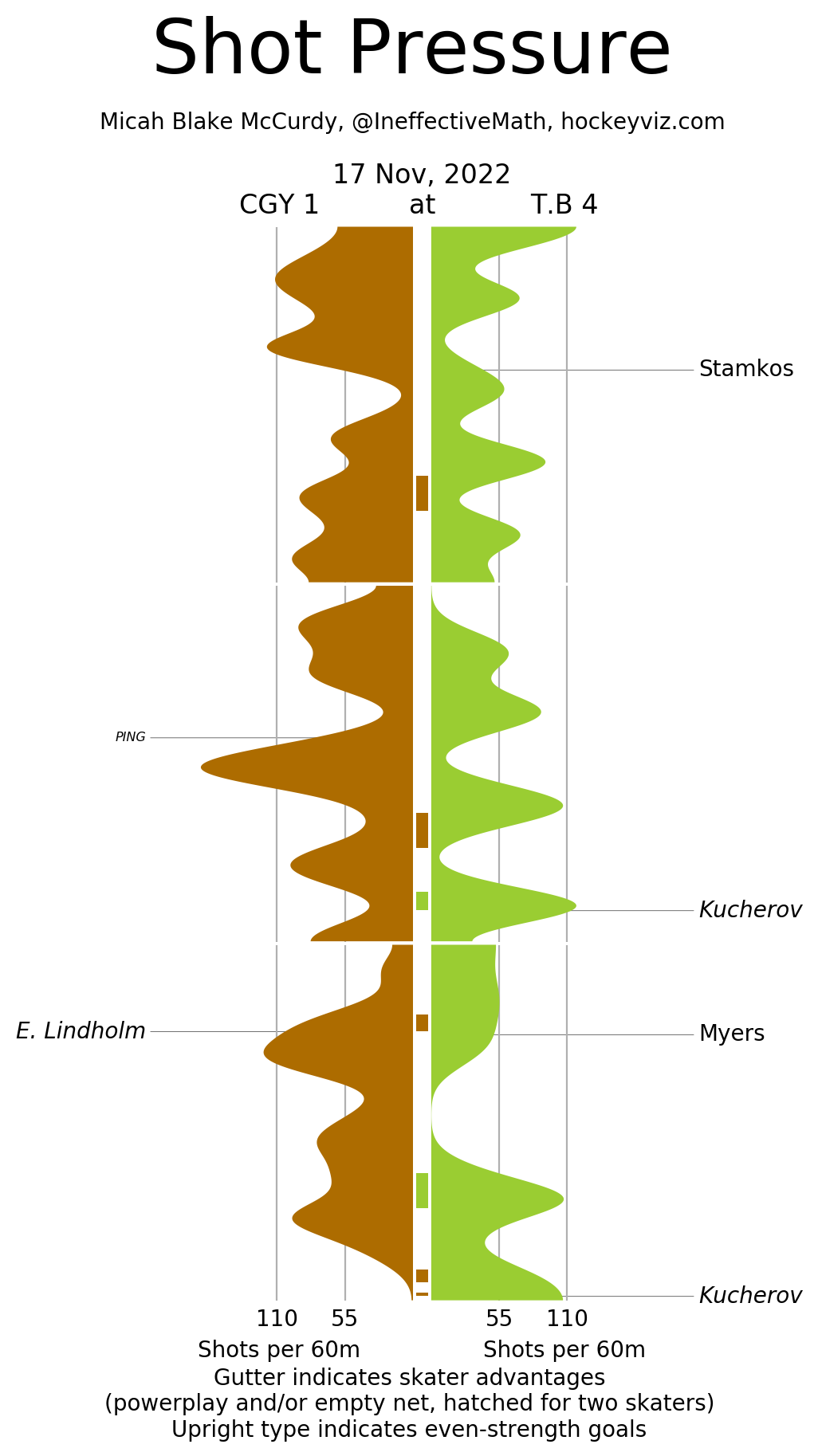 No heavy pressure spikes from either team at any time. This is why I used the words boring at the start – it was one chance hockey all night.
Taken By Chance – I’m out here praising how good the pairing of Weegar (44.59 SCF% // 11.07 HDCF%) and Zadorov (52.11% // 0%) have been only to see them get saddled with high danger chances against. Tampa is one hell of a good team, so I don’t want to get too critical – but someone has got to improve their defence against well-structured teams or Calgary won’t ever go anywhere. Jonathan Huberdeau (69.05% // 67.00%) was the only Flame outside of Gilbert (100% // 100%) to not be significantly out chanced.
xG Breakdown – 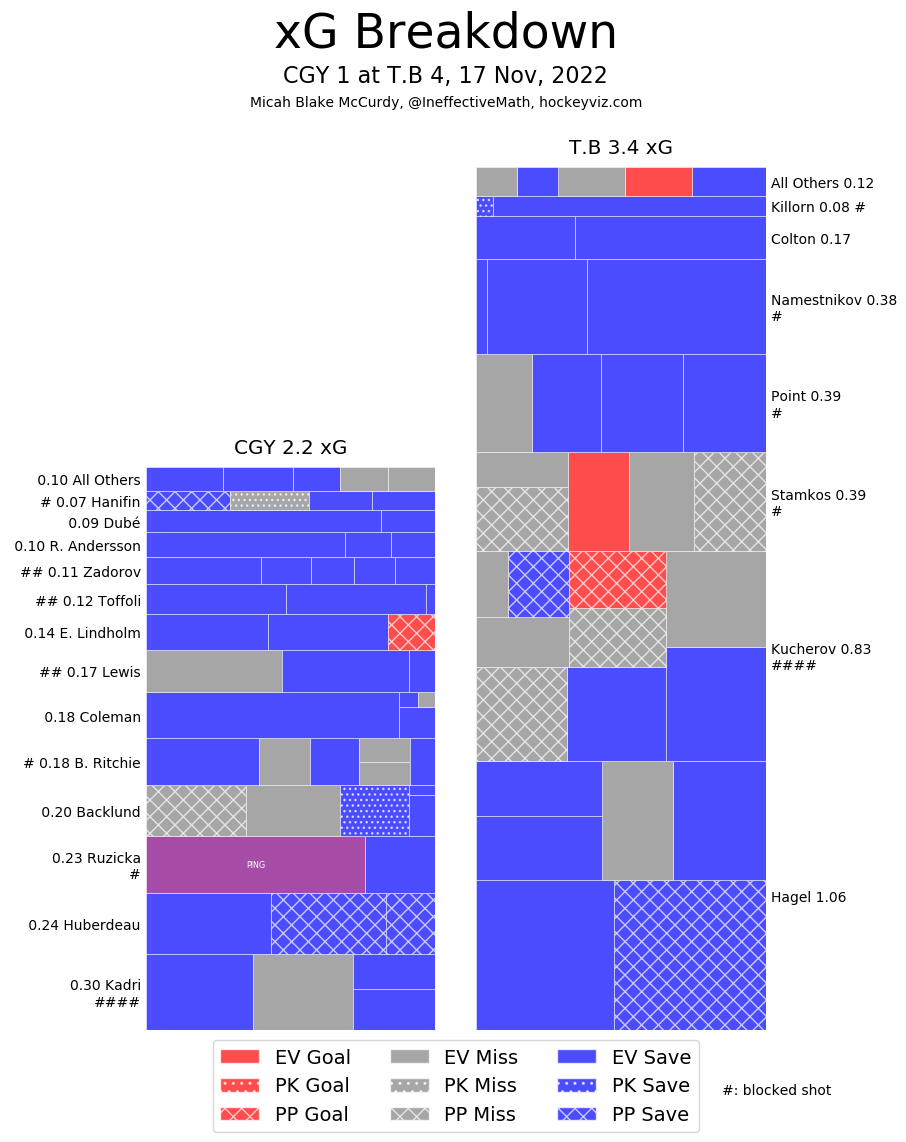 I really wish that Ruzicka goal went in, what a nice shot from in tight.
xGF% – Mangiapane (9.43%) and Lucic (9.43%) flanking Kadri (22.08%) did not work. The disallowed goal is camouflage to disguise the fact the Lightning took advantage of Lucic every time he was on the ice with these guys. The new lines are all about balance – I can understand that – but they’ve got to switch back, Lucic was more effective with Ritchie working along the boards as a fore-checking tandem. The Flames forward line that fared the best was Backlund (73.27%), Huberdeau (69.14%) and Lewis (68.55%).
Game Flow – 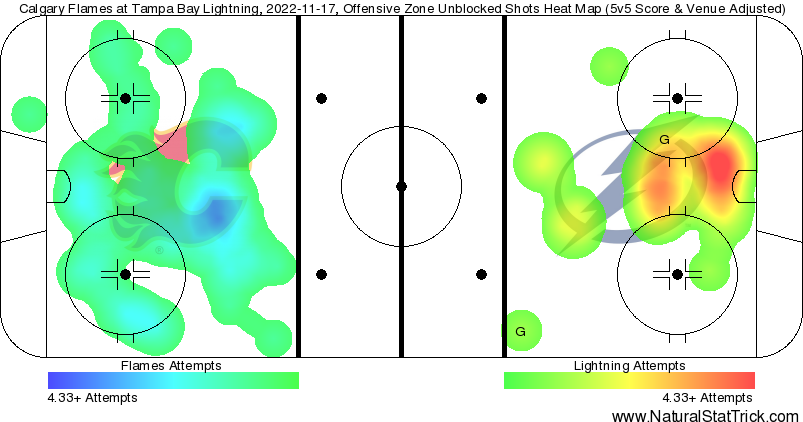 In The Crease – It’s those low danger goals that get you every time. Markstrom letting that goal in right after the Flames pull to within one is a heart breaker – it just cannot happen like that. In the grand scheme of things goaltending was maybe the Flames best attribute in this match, and yet it’s got such a stained goal counting against the record. Calgary didn’t generate anywhere near enough offence to win anyways, but we are all still waiting to have Markstrom steal a game. We should never expect it – that’s never fair to ask – but I still would like to see it.
Today’s Specials – The power play break-in continues to be atrocious. Someone needs to have the confidence enough to carry the puck across the line. You can’t keep passing it to the next guy hoping he’ll take it in. It always used to be Johnny Gaudreau, but he’s gone. Figure out who the new guy is going to be and start there. Until that happens, you’d be better off just dumping it in and chasing it down.
Player Spotlight – Jonathan Huberdeau – Sometimes it isn’t fair that the offence won’t come even though you’re playing decently. Huberdeau was noticeable in a positive sense almost every shift he was on the ice. He’s gaining more confidence and is showing some good consistency. I wonder what kind of offence that could come with Mangiapane in Trevor Lewis spot. He’s great at fore-checking and hunting down pucks with a nice nose for finishing at the net. Huberdeau and Backlund have had instant chemistry with Lewis there, would it continue with a more skilled scorer? I think that’s worth a try.
The Goals –
Flashalytic’s 3 Stars –
1) Jonathan Huberdeau
2) Mikael Backlund
3) Chris Tanev
The Flames next game is Saturday at 2 p.m. MT against the Florida Panthers.
(Stats compiled from Naturalstattrick.com // Game Score from Hockeystatcards.com // xG and Under Pressure charts from HockeyViz.com // Game Flow and Shot Heatmap from NaturalStatTrick.com)
Editorials
Recent articles from Shane Stevenson