Beyond the boxscore – G12: There’s a Hill in the way 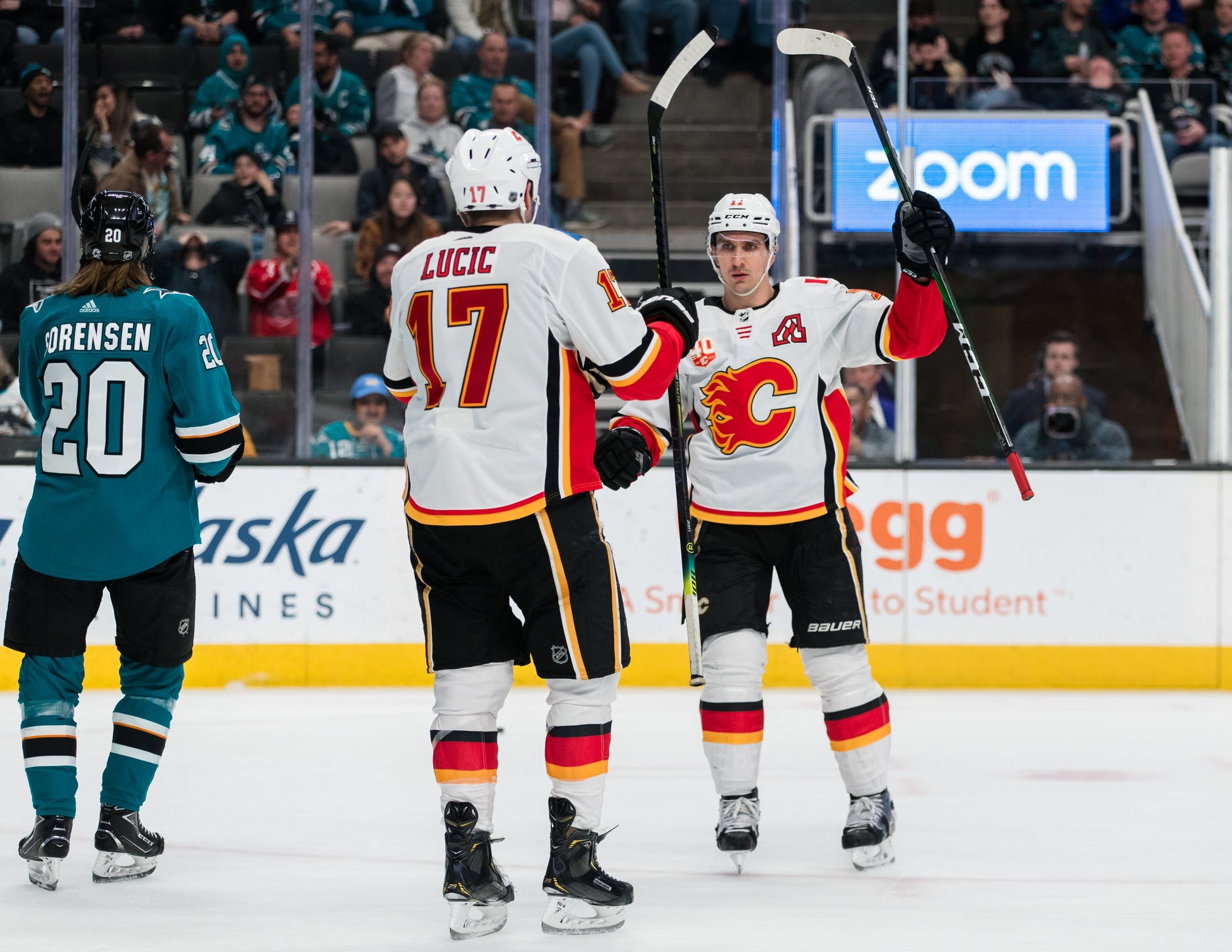 By Shane Stevenson
1 year ago
If I break this down by periods, we really see three different games: an evenly matched first, a Flames dominant second, and a Sharks led third period. The score won’t be an indicator of how close the game was as the Sharks two ENG will sway that. If the could rearrange those periods so the slump was in the second they may have been able to overcome, but unfortunately the third period was the most lost I’ve seen this squad this season.
CF% – 51.64%, SCF% – 55.95%, HDCF% – 52.25%, xGF% – 57.02%
It’s a Team Game – Calgary out played San Jose more in the second than they got outplayed in the third – so the single best team at any point still was the Flames. That doesn’t really feel any better as they still ended up with the loss and no standing points. As pointed out earlier this is the first incident, I’ve seen them stuck in their own zone like that in the third – as it stands this is the exception not the norm.
Corsi King – Blake Coleman (78.21 CF%) and his linemates finished tops here with the third pairing including Gudbranson (73.71%) also finishing with high ratios. I felt Zadorov (60.20%) still had shifts in his defensive zone where he looked lost, but in the offensive zone he held the line well and kept extended play in the Sharks zone going.
Corsi Clown – Andrew Mangiapane (35.13%) was a big victim of the third period onslaught. It wasn’t just him however, as the whole team seemed to be about a half a step off picking up passes or in getting their shots off. The fourth line centered by Sean Monahan (36.84%) looked outmatched in the NZ by the Sharks depth players.
Taken By Chance – Blake Coleman (81.77 SCF% // 100 HDCF%), Mikael Backlund (53.94% // 100%), Tyler Pitlick (64.13% // 100%), and Erik Gudbranson (100% // 100%) were the high point tonight ratio wise as they didn’t surrender a high danger chance against. Chris Tanev (54.06% // 63.33%), Oliver Kylington (67.86% // 63.33%), and Johnny Gaudreau (57.87% // 51.29%) all created the most high danger chances finishing with over 5 for each of them. Peep the ratios though, if they create over 5 and the ratio is close to 50% that means they also allowed a similar amount against them. Rasmus Andersson (43.88% // 34.39%) had over 8 high danger chances come against him, highest number on the team tonight.
xGF% – Overall the whole team did really well here so overall they won their matchups on aggregate, just not on the scoreboard. Erik Gudbranson (83.84 xGF%) led the way with goal scorer Milan “Rocket Loochard” Lucic (69.31%), Dillon Dubé (62.95%), Matthew Tkachuk (62.54%), and Andrew Mangiapane (61.55%) all finishing over 60%. Mangiapane finishing with a higher xG number and low scoring chance ratios tells me that his best chance was one that should have went in (and probably would have 8/10 times).
Game Flow –

What a coincidence that this chart also looks like a Hill, the one they couldn’t climb tonight. (Okay I’ll stop with the puns – maybe.) Nothing emphasizes the |story of three periods” quite like this. Very clear to see the even start, Flames second, Sharks third when looking at the game flow line.
Game Score – Looch (0.91 game // 0.47 average) was the top Flame performer. Johnny Gaudreau (-0.22 // 1.66) was the one with the most difference between his game and his average. As mentioned in the chance section, he gave up almost as much as he created. When the breakout struggles to find possessive zone exits the Flames really struggle with their entrances and this limits what Johnny Gaudreau can do well: Stickhandle into traffic with speed.
Shot Heatmap – 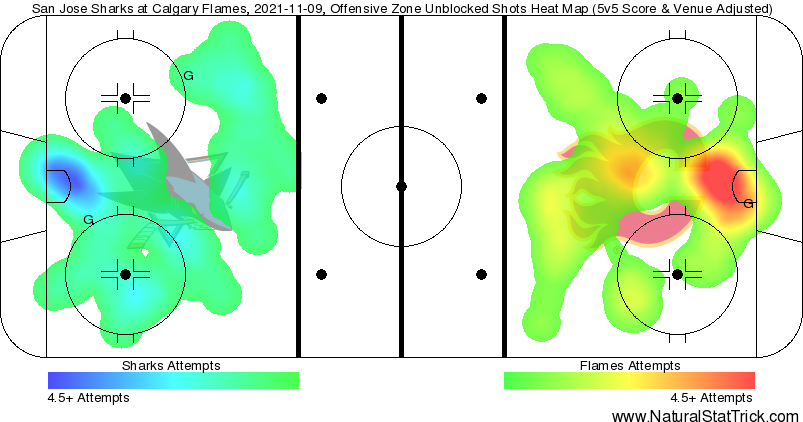 Another game, another map showing the Flames getting shots from the crease area at a heavy rate. That’s a real pleasant thing to see. On the flip side them allowing that much volume from in close is a new occurrence and one that we can all hope doesn’t repeat itself for awhile going forward.
In The Crease – It’s hard to blame Markström for that weird deflection off Zadorov’s stick, but with no traffic in front and time to gauge it he straight up was fooled by the sinker. Low danger goals against are the single biggest ones that can burn a team when it’s even and that long floater did just that. 1.80 expected goals against, 0.900 SV%, 1 high danger and 1 low danger goal against.
Today’s Specials – They had some good opportunities on the PP in this one. It was where Johnny and Tkachuk looked the strongest. Some nifty passing but everything was just… off. Shots a bit too wide, passes an inch out of reach, bounces just out of their shooting lanes.Part of it is bad luck, the other part is good pressure from the Sharks. A PP goal tonight could have been the difference, but Adin Hill said no.
Player Spotlight – Noah Hanifin – not the greatest night for Hanifin, but that’s not why I chose to highlight him. His play has been steadily that of a real top 4 player through 11 games. The chart below is his rolling impact (not including this game against the Sharks) which shows how high a level he’s been playing at. He’s given the coaching staff a true second pair they can trust on most nights and that impact alone cannot be understated to the current success Calgary has seen. Flashalytic’s 3 Stars –
1) Milan Lucic
2) Erik Gudbranson
3) Blake Coleman
The Flames are set to embark on a seven-game road trip with two back-to-backs. It all kicks off Thursday from Bell Centre in Montreal at 5 p.m. MT. All covered right here at BtB and FlamesNation.
(Stats compiled from Naturalstattrick.com // Game Score from Hockeystatcards.com)
Uncategorized
Recent articles from Shane Stevenson