Beyond the boxscore – G19: No excuses necessary 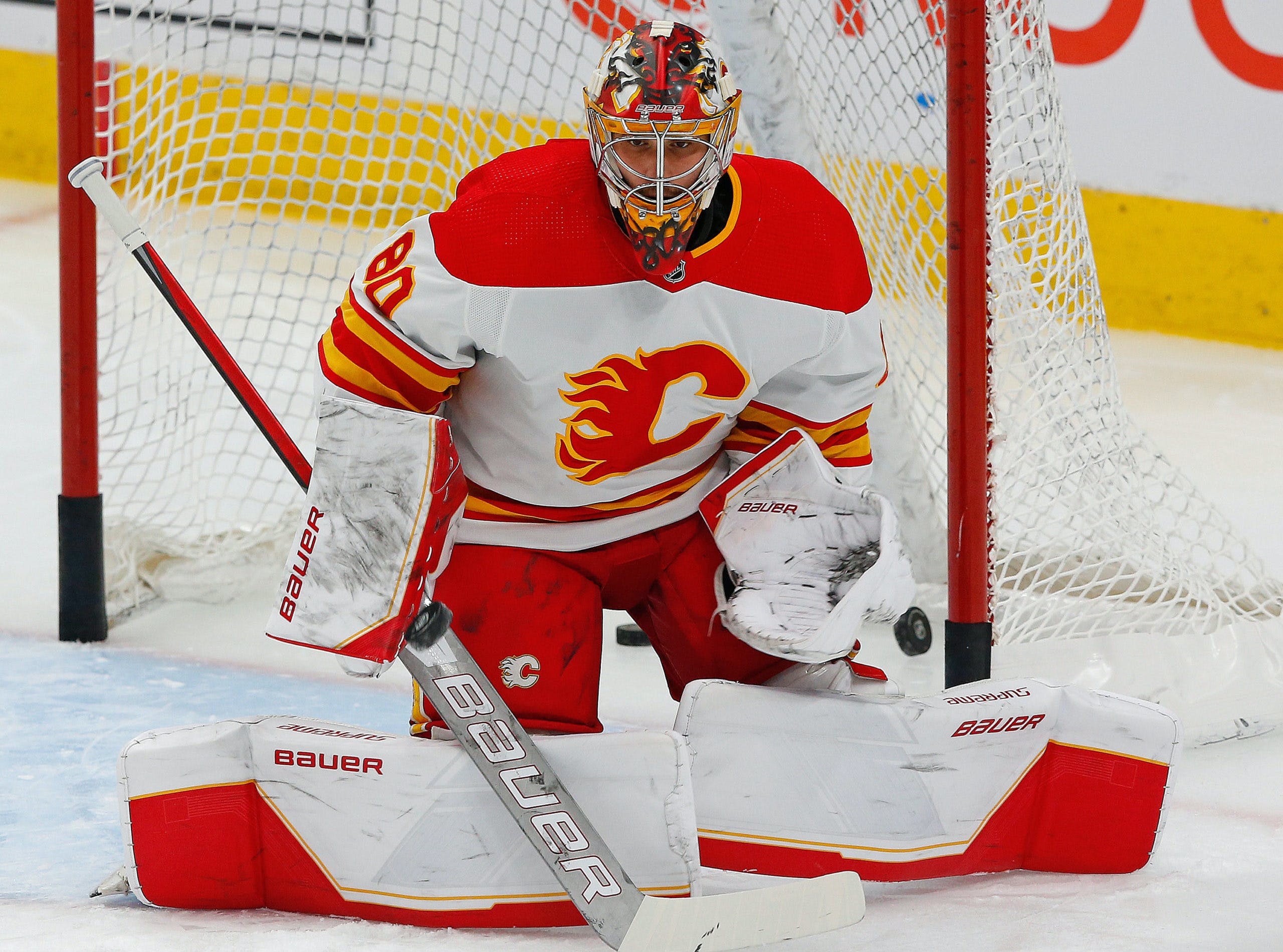 By Shane Stevenson
1 year ago
Excuses. Of any game the Calgary Flames will play this year this tilt against Boston gave them the most possible excuses to mail it in and take a loss. 1) End of a seven-game road trip in the eastern time zone 2) the second half of a back-to-back and the tail end of 3 games in 4 days 3) the first two points combined with the fact that this was their eighth game in their last 13 days 4) Your backup goalie is in net. I’m sure many readers could think of more – they had every excuse in the book they could have used, and instead they came out and kicked the pants off the Boston Bruins. Defensive domination against a team many have pencilled in for a playoff spot in the Eastern Conference. Impressive stuff, truly.
CF% – 55.88%, SCF% – 64.06%, HDCF% – 55.74%, xGF% – 58.52%
It’s a Team Game – Calgary didn’t leave me in awe because of their offence, it was the structure of their defence. I’m sure if you asked any of those Bruins players if they enjoyed playing Calgary after this one you’d get a resounding “no”. Throughout the lineup the commitment was to defence first and the team took their offensive chances when they could. Personally I loved Välimäki’s mobility on the third pair – brings an extra puck moving player for breaking out when the bottom six is on the ice.
Corsi King – When it comes to defence first hockey there’s an emerging new player in the talk at the top – and that’s Matthew Tkachuk (70.23%). Partners in crime Johnny Gaudreau (68.17%) and Elias Lindholm (65.53%) rounded out the podium with Chris Tanev (64.91%) and Mikael Backlund (60.35%) also finishing over 60%.
Corsi Clown – I don’t know what’s been going on with Blake Coleman (45.94%) of late. His numbers aren’t tanking by any means, but he’s been struggling lately. My suspicions are his ratios take a hit post PK while Mangiapane and Backlund are always slightly better because they get the end-of-PP boost usually. I’m going to have to keep a closer eye on him, specifically scout him the next few games to see just what is going on.
Taken By Chance – 4 players with over 3 high danger chances created and none against? Lets hear em: Matthew Tkachuk (87.13 SCF% // 100 HDCF%), Johnny Gaudreau (87.49% // 100%), Noah Hanifin (85.29% // 100%), and Rasmus Andersson (81.69% // 100%). When all four of those players hit the ice together the puck was hardly in the defensive zone. The neutral zone passing was slick and accurate and nobody made any bad plays.
xGF% – Here I’m going to talk about Mikael Backlund (78.44%) and Andrew Mangiapane (76.73%). These two were able to finish above 75% in their xG ratios despite not generating a high danger opportunity at 5v5. They didn’t allow a single one either – and that tells me the story of a duo who played at an elite (and I mean elite) defensive level. There were people from Team Canada in the stands scouting this one (Bergeron, Marchand, Mangiapane all playing) – and Mangiapane looked a step ahead of his competition at times. He’s playing his way on to that team at a rapid pace.
Game Flow – 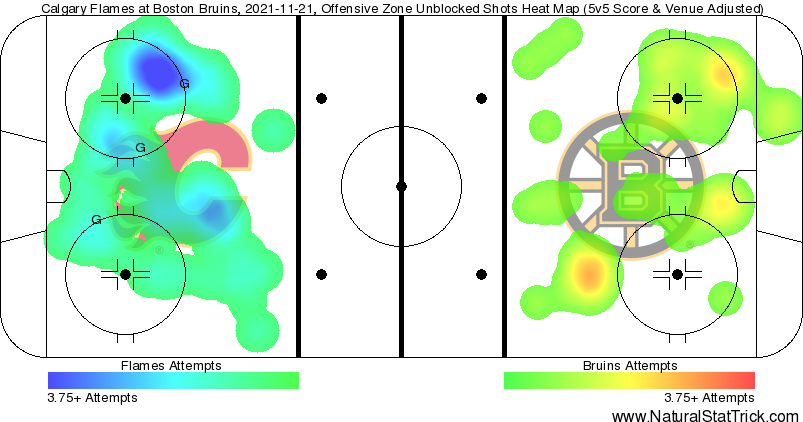 Second straight game Calgary didn’t really get to the crease themselves – but they seemed to have a very good scouting report on Swayman. The first two goals came off almost identical rebounds – maybe Vladar shared some secrets on his old buddy with his new team. Defensively the Flames gave the Bruins almost nothing. A barren wasteland of attempts that does nothing but scream “impressive.”
In The Crease – To be quite frank, I never envisioned discussing 7 shutouts this early in the season. I 100% did not ever expect to be writing about the backup goalie posting back-to-back shutouts. 1.36 expected goals against, 5 high danger chances faced at 5v5 and a big ol goose egg on the boxscore. I said before the game I was stoked for “Revenge of the Sith” and Darth Vladar did not disappoint.
Today’s Specials – The best bread you can buy at the store is the shorthanded bread. Okay – bad dad joke – but all kidding aside poor Dillon Dubé. He rocketed that puck right at Swayman’s pads three times in a row before Mange scooped and scored. The Flames aggressive penalty kill has become something that always keeps them in any game, against almost any opponent.
Player Spotlight – Juuso Välimäki – It’s worth touching on that – by a small margin – Välimäki did lose his scoring chance battles tonight. It wasn’t terrible – especially when he hadn’t played a game in a month. He made a nice play to pinch on the boards and throw the puck on net, which caused the first goal as the rebound went straight to Gaudreau. He earned himself a second game in a row for me, quite easily.
Flashalytic’s 3 Stars –
1) Matthew Tkachuk
2) Noah Hanifin
3) Dan Vladar
The Flames finally return to the Saddledome Tuesday against the Blackhawks. That game will be at 7 p.m. MT covered right here at FlamesNation.
(Stats compiled from Naturalstattrick.com // Game Score from Hockeystatcards.com)
Uncategorized
Recent articles from Shane Stevenson