Beyond the boxscore – G9: A battle back point By Shane Stevenson
1 year ago
Hockey is a very unforgiving game. The best team does not always win. That’s a hard concept for a lot of people to realize, but it’s a factual statement. Tonight, the Calgary Flames were by far the better of the two on the ice tonight. Tkachuk said it best post-game that 3v3 OT is a toss-up, and Sutter said it was a good “battle back point.” Sometimes the guy with the pads at the other end of the ice does what he’s paid to do and stops the puck – it’s why they play 82 of these contests.
CF% – 58.65%, SCF% – 66.29%, HDCF% – 65.21%, xGF% – 68.79%
It’s a Team Game – I’ve said it in previous breakdowns, and I’ll double down on it here – over 60% means you severely outplayed the other team. Credit where it’s due the Predators did push back in the second… only to have Calgary go back to dominating them most of the third. Just ONE of those four breakaway opportunities get buried in the first and Calgary gets the extra point. Ah well alas, you can’t (and won’t) win them all – and I’ll take an 8-game point streak at any time of the season. 6-0-2 in their last 8 games, the record is set at 13 by the 1988-89 Flames. With what this team has shown us nightly that level of streak could be doable if no more superb goaltenders stand in their way.
Corsi King – Andrew Mangiapane (71.33 CF%) just flat out needs to be given more ice time. I get that he kills penalties and plays PP2, but 10:39 at 5v5 for one of the best 5v5 goal scorers in the league? I get the coach said he doesn’t roll 4 lines but uses them – but Mangiapane is a difference maker, he shouldn’t be playing less than Trevor Lewis (11:10 5v5).
Corsi Clown – That Milan Lucic (47.34 CF%), Sean Monahan (44.80%) and Trevor Lewis (38.42%) line was the only one to finish negative here. Blake Coleman (47.22%) finished below 50% as well and that’s your list for this one. Look I know nothing is going to happen to the lines if they keep winning – the usage doesn’t change. When the time comes to make lineup changes (and that time will come) then I expect to see Mangiapane the first promoted.
Taken By Chance – Two players generated no high danger chances tonight, Sean Monahan (47.20 SCF% // 0 HDCF%), and Milan Lucic (46.45% // 0%). The most against was Oliver Kylington (57.93% // 45.87%) who also created a few of his own (nice snipe) but was caught out of position in his own end a few times. Two of those chances came directly because of one failed pass he tried to stretch out through the neutral zone. It immediately transitioned back into the Flames end and Markstrom had to make sharp saves. Overall quality was great, but that one instance is all it takes to cost a team a goal.
There were some high danger beasts tonight starting with Johnny Gaudreau (71.06% // 100%) and Matthew Tkachuk (74.33% // 100%). Also, both Noah Hanifin (53.04% // 71.80%) and Dillon Dubé (54.16% // 83.39%) both led the team in high danger opportunities – seriously I have no idea how Dubé didn’t put one in.
xGF% – Andrew Mangiapane (83.43%) lead the way here, he had almost 100% through one period. 100% xG means the other team didn’t generate a single shot while you were on the ice – from anywhere. Even an unscreened shot from the point generates a minimal xG output so to be at almost 100% in a period is a testament to how little Nashville created while he was out there. Still played fourth line 5v5 minutes though. All in all 13 skaters finished above 60% (yes SIXTY) making this a very positive section.
Game Flow – 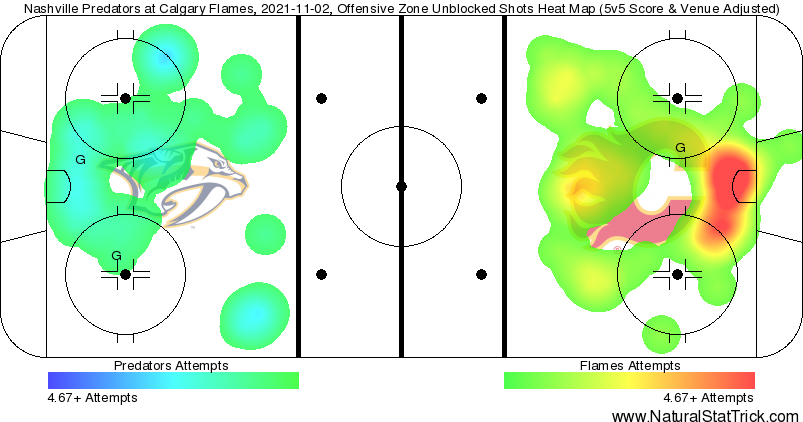 Look at that deep red from around Calgary’s net – they were aggressive to Saros in this one. Kudos to him for withstanding that onslaught, i felt his rebound control wasn’t the greatest and Calgary really left some golden opportunities there waiting in the open ice, but he made all the initial stops and that was enough to turn a dominant performance into a 1 point outing.
In The Crease – Some nights you aren’t too busy and that can be detrimental to you. 1.22 expected goals against at 5v5, 0.895 SV% with 2 high danger goals against. The Carrier deflection off Kunin – good luck to anybody stopping that weird bounce. That will happen (more often than you think). The Forsberg goal though upsets me. Not because Markström was out of place or anything, but because the shot was so perfect. He had maybe 2 seconds to get that shot off and he picked his corner with a laser. That’s not cool Filip, not cool at all.
Today’s Specials – I know I picked on Mangiapane’s ice time earlier – I get here to see he played 4:07 on the power play. Which alright – cool – but I still want him playing at 5v5. Anyways Sutter said it best if you can get one PP goal a game that’s a win. 1/6 may not feel like a win but I’d rather have that Tkachuk goal than not. First unit had some real strong looks tonight but drank some non-purple Gatorade or something beforehand because they seemed like an inch off getting to shots or picking their corners. Regression comes for us all I suppose.
Player Spotlight – Dillon Dubé – How. Did. He. Not. Score. He did rip one aggressively off the post just before Kylington tied it. The man was just flying out there tonight. Dillon Dubé was a very noticeable impact player at 5v5 – constantly pushed the play towards the opposition zone and played strong on the boards when he had to. Even if an Eichel trade doesn’t happen with Calgary keeping Dubé isn’t a bad outcome. I mean look at his chart below this, after a rough first two games at center the kid is taking off.

Note: Each data point on these rolling charts represents a players average over a total 5 game span. So point 1 is games 1 to 5, whereas point 2 would be games 2-6, 3 would be 3-7 and so on. Dubé had a rough outing in Detroit and Washington and then hasn’t since. Truly playing dominant hockey consistently right now.
Flashalytic’s 3 Stars –
1) Matthew Tkachuk
2) Andrew Mangiapane
3) Noah Hanifin
The Flames continue their schedule Thu., Nov. 4 against the Dallas Stars from the Saddledome at 7 p.m. MT all covered right here at FlamesNation. Any questions towards content or statistical questions in general can be directed towards @Flash_33 on Twitter.
(Stats compiled from Naturalstattrick.com // Game Score from Hockeystatcards.com)
Uncategorized
Recent articles from Shane Stevenson