Beyond the Boxscore: Montreal throws an Allen wrench into Calgary’s gameplan 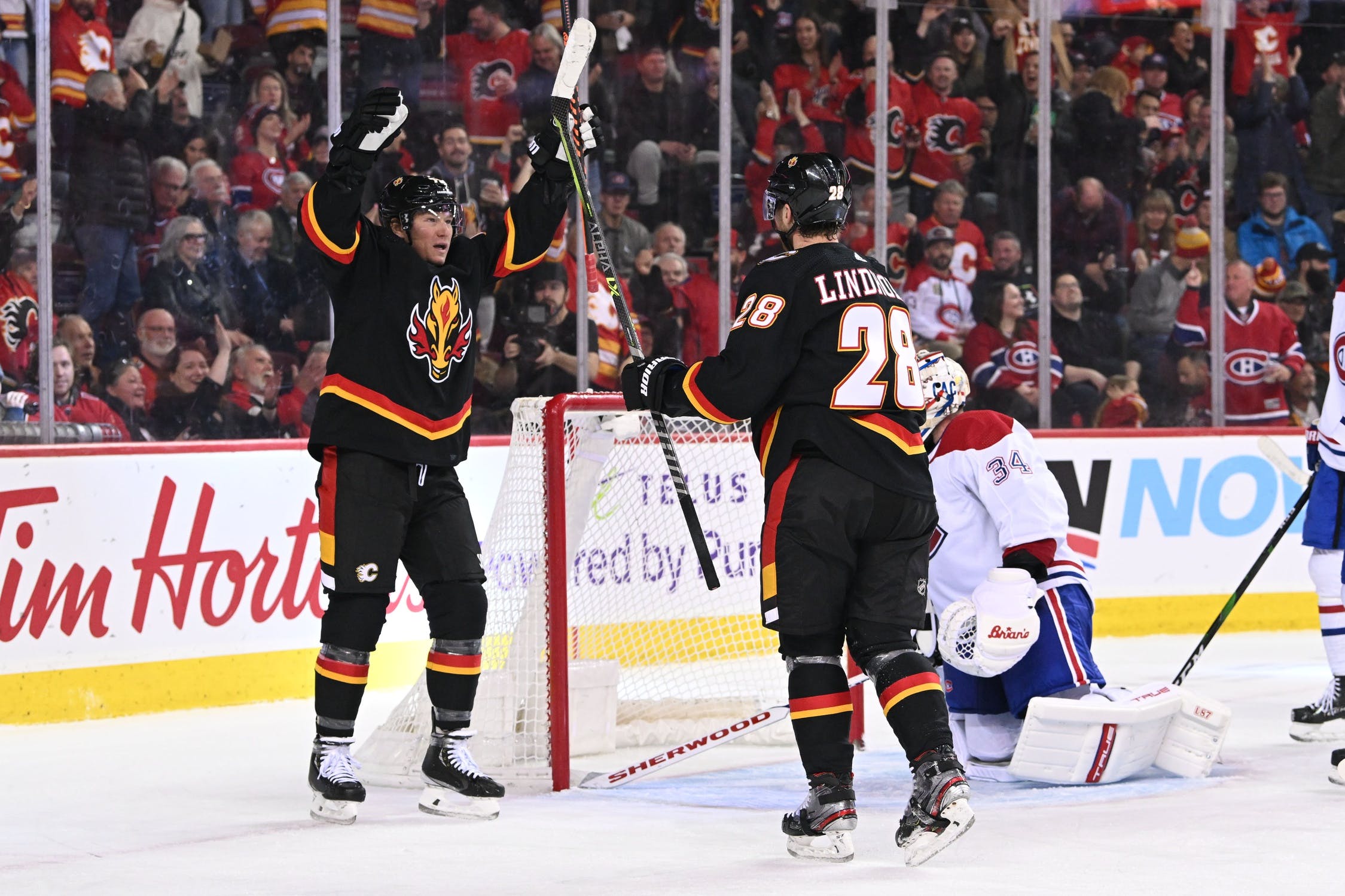 By Shane Stevenson
1 month ago
Some nights it just isn’t fair. The Calgary Flames controlled the majority of the game against the Montreal Canadiens on Thursday night but failed to get more than one goal past Jake Allen. It was not for a lack of effort though. Calgary swarmed the crease all night at 5v5, but with a sputtering powerplay and some questionable goals scored by Montreal that’s all it took to lose.
CF% – 60.16%, SCF% – 62.26%, HDCF% – 73.69%, xGF% – 61.24%
It’s a Team Game – High danger chances 14 to 4 in favour of the Flames. That’s just 5v5 too, not counting a couple good looks on the power play. I really liked the look of Ružička next to Backlund, the young Flame got himself just shy of a handful of great opportunities. Calgary’s goals are seemingly coming in boom or bust format – one would think eventually the goals would start to level out. I still feel a good Flames run coming on here, they just need someone to be consistent for a couple weeks.
Corsi King – Chris Tanev (76.83%) and MacKenzie Weegar (76.83%) lead the way for the Flames tonight constantly pushing play back towards the Montreal zone. Not too many Flames in the red zone here because the Flames had the puck most of the night. Montreal’s counterattack was pretty weak – the two goals they got were completely unconventional.
Corsi Clown – Brett Ritchie (24.21%) and Trevor Lewis (28.54%) were down at the bottom with some pretty low 5v5 ice times. I’m okay seeing that because if Huberdeau (67.91%) is going to play more somebody has to lose some time. These guys are typically effective all the same in low minutes or high, moving their needle doesn’t hurt their development either.
Under Pressure – 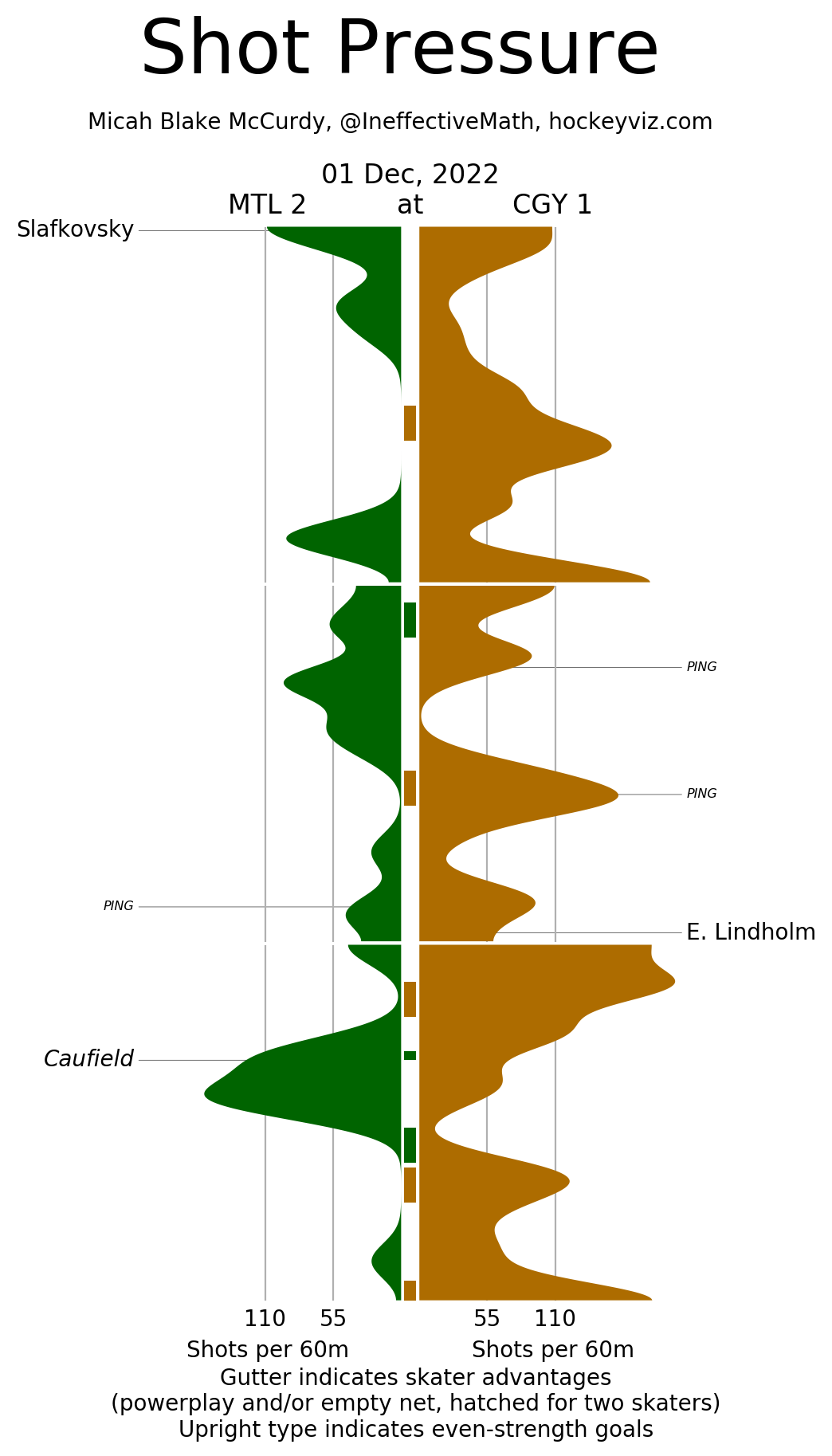 Taken By Chance – Mikael Backlund (84.17 SCF% // 86.43 HDCF%) being involved in 8 high danger chances, 6 of which came with Blake Coleman (81.84% // 82.72%) and Adam Ružička (76.69% // 82.72%). Every time they were over the boards they were able to create some form of attack. Ružička has been an absolute sparkplug for this lineup so far and deserves his nightly spot in the lineup no questions asked. No matter who he plays with it tends to work out well for a decent stretch of time.
xG Breakdown – 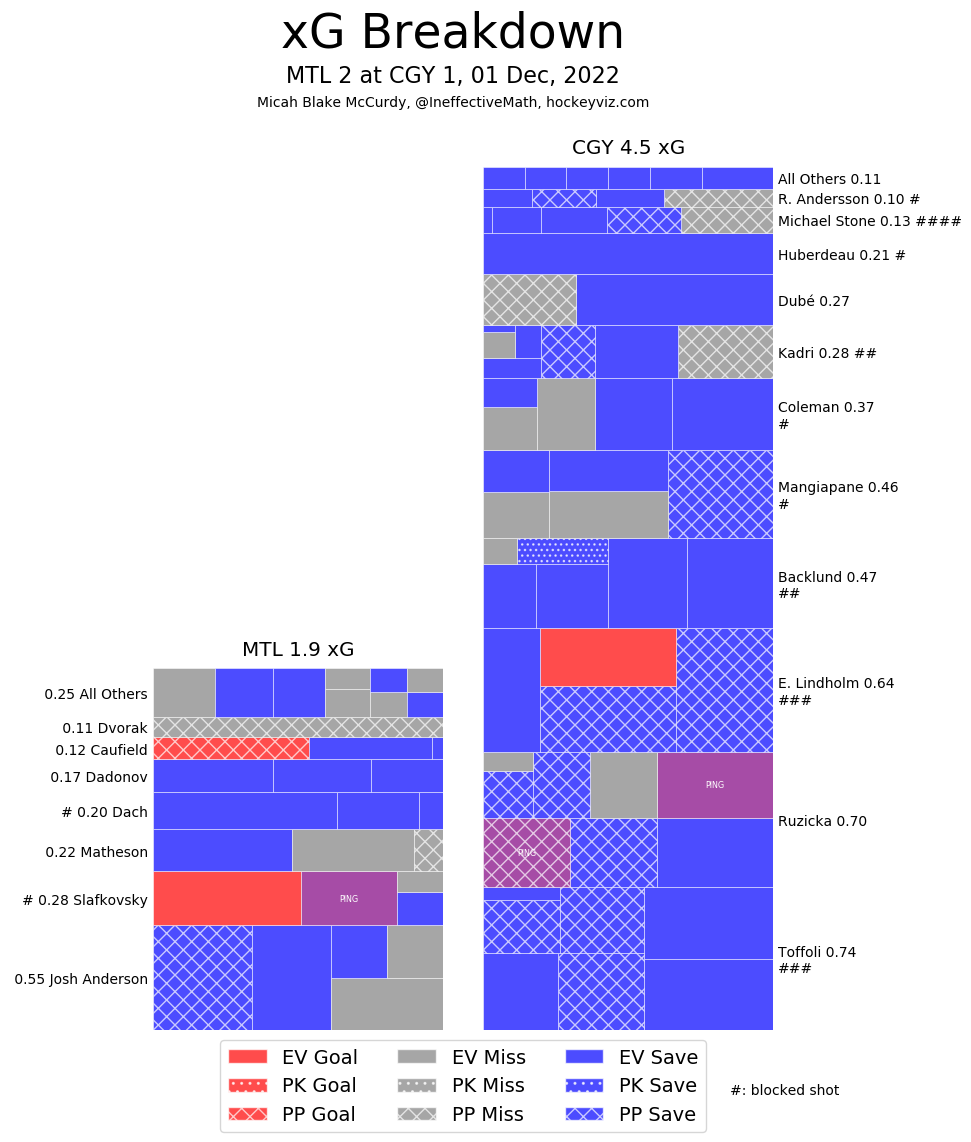 xGF% – Jonathan Huberdeau (66.67%) continues his streak of fantastic play. The pass he made to Lindholm for the 1-1 goal was quick and accurate, everything you want. He’s looking more assertive by the day and it’s very fun to watch. Every single player graded all right except two, and those two got their ice time limited. They Flames are showing a deviation from just rolling 4 lines, and it’s starting to happen more frequently. Huberdeau got over 20 minutes in all situations – a number he’s very used to playing at and wasn’t early in the year.
Game Flow – 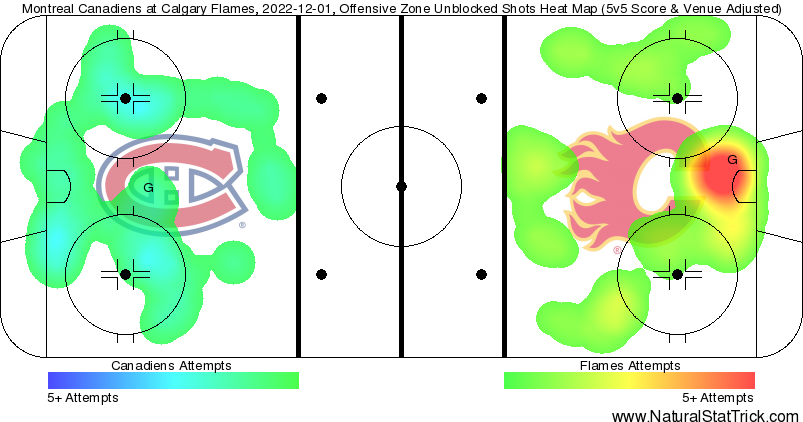 In The Crease – Markstrom I have no idea what you were doing man. I’m sure you had good intentions but that first goal… just made no sense to make that play at that time. The Habs only generated 1.44 expected goals against at 5v5. Medium danger was how the one goal was classified, the other one was a Caufield rip on the power play… caused by Markstrom trying to tick off Josh Anderson. Mangiapane got the penalty, but it was unnecessary in a 1-1 game for Markstrom to do that.
Player Spotlight – Tyler Toffoli – Find any metric or tangible stat and Toffoli grades out well above average. He’s been every bit the top line forward he’s been cast as so far. I still think there can be a bit more in terms of communication with Huberdeau, but that can only come with time. He gets some flack for his foot speed sometimes but he’s not too often out of place.
The Goals –
Flashalytic’s 3 Stars –
1) Adam Ruzicka
2) Mikael Backlund
3) MacKenzie Weegar
The Flames are back in action on Saturday night when they host the Washington Capitals. Puck drop goes just after 8 p.m. MT.
(Stats compiled from Naturalstattrick.com // Game Score from Hockeystatcards.com // xG and Under Pressure charts from HockeyViz.com // Game Flow and Shot Heatmap from NaturalStatTrick.com)
Editorials
Recent articles from Shane Stevenson