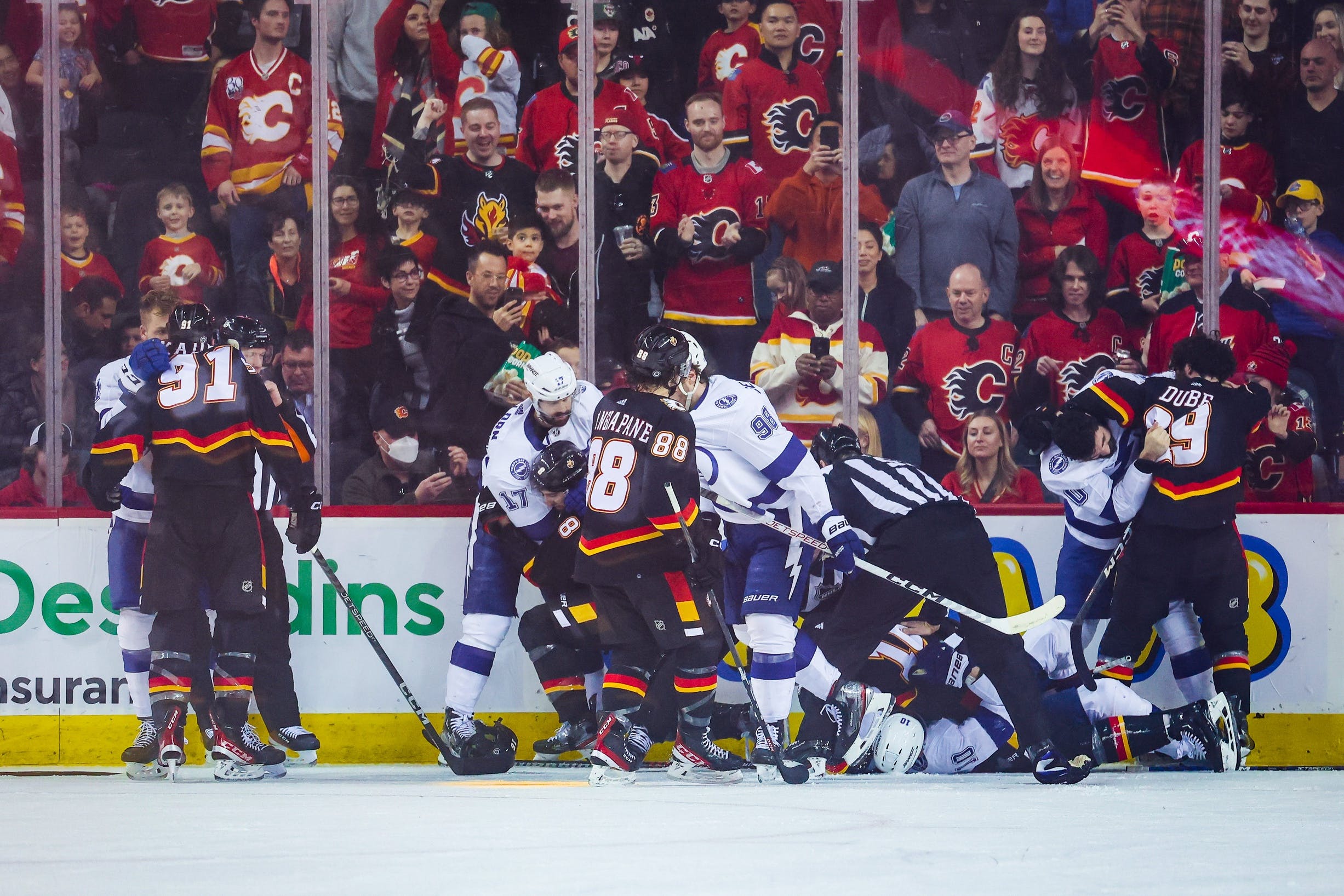 By Ryan Pike
14 days ago
Be sure to check out NHL betting site Betway for the latest Flames game day odds!
Friends, sometimes afternoon games aren’t all that good. Some of them are pretty bad. Everyone’s out of their routines, and things can get clunky. But Saturday’s game between the Calgary Flames and Tampa Bay Lightning was really high quality. The Flames played a strong, but not perfect, game against a tough opponent and came out on top.
The Flames got back into the win column with a 6-3 home victory over the Lightning.

From a pure entertainment standpoint, this was one of the better games of the season. From a Flames performance standpoint, it was also one of the better games of the season.
The Flames were all over the Lightning for big swaths of the first period, and drew a handful of penalties one after another. On one power play, with Erik Cernak in the box for roughing, Nazem Kadri reflected a Tyler Toffoli shot past Andrei Vasilevskiy to give the Flames a 1-0 lead.
Late in the period, the Lightning took two penalties on the same shift. Nikita Kucherov was called for tripping in the neutral zone while Zach Bogosian was given a roughing minor for trying to fight an uninterested MacKenzie Weegar.
The game continued to get chippy in the second period. The score also swung away from the Flames midway through the period, as Tampa scored twice in a 48-second span.
Tampa tied things up off a bad bounce (and some bad decision-making). Noah Hanifin got to a loose puck in the Flames’ zone and went to fire it out of the zone. But he misjudged Anthony Cirelli’s location, and his clearing attempt bonked off Cirelli’s stick and right to Steven Stamkos in the face-off circle. He blasted the puck past Dan Vladar to tie the game up at 1-1.
48 seconds later, the Flames lost a battle for the puck on the side boards in their own zone. Nick Paul fired the puck from the side wall over to the net-front area. Andrew Mangiapane was right with Vladislav Namestnikov, but the puck glanced off the Lightning forward’s skate and past Vladar. (The goal was reviewed by the NHL, as all goals are, and judged to not be a distinct kicking motion.)
The Flames tied things up fairly quickly, though. Elias Lindholm’s line generated a couple good scoring chances in the Tampa zone. Vasilevskiy laid out stopping a Toffoli chance at one post. Toffoli went for a wrap-around, Victor Hedman was seemingly guarding Lindholm for the slot pass, and so Toffoli’s wrap-around attempt went off Hedman’s skate and into the open net. That made it 2-2.
The Flames retook the lead later in the second period. Mikael Backlund’s line headed into Tampa’s zone with a three-on-two rush. They rattled off a pair of scoring chances, scored on neither of them but kept battling and getting the puck back. On their third scoring chance, Rasmus Andersson’s shot from the point glanced off Hedman, changed directions and eluded Vasilevskiy to make it 3-2 Flames.
The Flames kept at it in the third period and pulled away a bit. The Flames won a few small-area puck battles inside their blueline, then began to transition the puck up ice. Andersson found Dillon Dube with a nice neutral zone pass that sent Dube in with a good look on Vasilevskiy, and he beat the Lightning goaltender top corner to extend Calgary’s lead to 4-2.
But the Lightning got back within one with roughly four minutes remaining in regulation. The Lightning pulled Vasilevskiy for the extra attacker with an offensive-zone draw. They won the draw. Hedman’s point shot didn’t make it on net, but Cirelli jammed in the rebound from the side of the net to make it a 4-3 Flames lead.
But the Flames managed to hold on. Jonathan Huberdeau and Blake Coleman added a pair of late empty-netters to give the Flames a 6-3 lead (and victory).

Let’s call a spade a spade: the Lightning are a really good team, but they were playing their third game in less than four nights.
But let’s also give the home side credit: they were really good, and were the better team for most of this game. They transitioned the puck well. They managed the puck well. They defended well. They got solid goaltending. Special teams were good. They made mistakes, and some of them ended up behind their goaltender, but they managed to overcome those mistakes and get a very well-deserved two points in the standings.
The game got chippy in the second half, too, but the Flames didn’t seem to lose their effectiveness during those shenanigans. They maintained their composure, for the most part.

Let’s give it to Andersson, who was all over this win. He had a goal and two assists, and he was jumping into the rush, winning battles and making smart plays all over the ice.
Honourable mentions to Dube and Toffoli.

The Flames trailed for 70 seconds. Tampa never got a chance to get comfortable with the lead, because the Flames rallied really quickly and didn’t let them get comfortable.

2019 first-round pick Jakob Pelletier made his NHL debut.
Milan Lucic fought Ian Cole in the first period, with Cole challenging Lucic after he made contact with Vasilevskiy while forechecking behind the net.

The Flames (22-16-9) are back at it on Monday night when they welcome Johnny Gaudreau and the Columbus Blue Jackets to town.
News
Recent articles from Ryan Pike