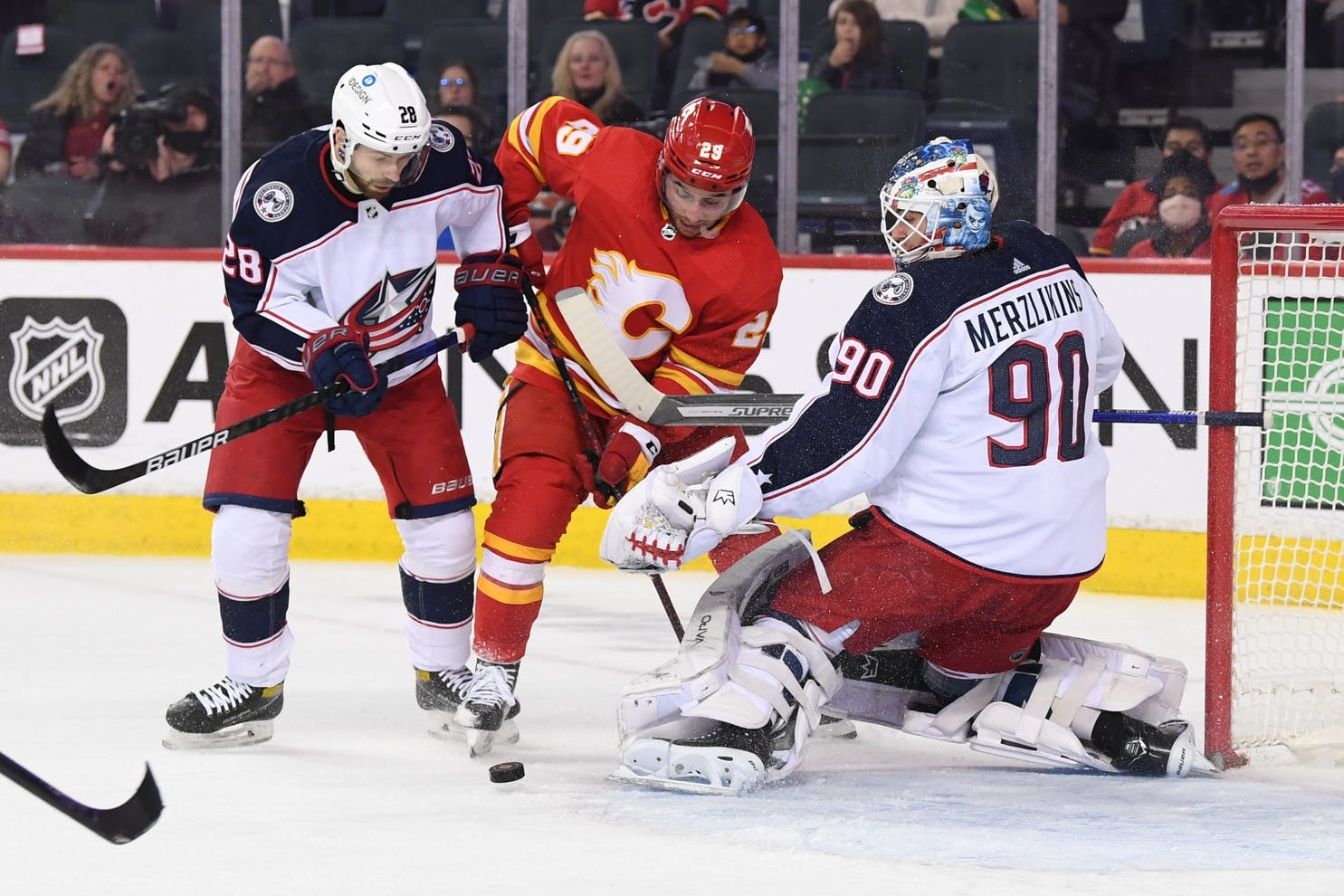 By Ryan Pike
11 months ago
The Calgary Flames are a confident bunch these days. Even in games where they’re not sharp for the entire time, they’ve got good enough goaltending, structured enough defensive play and potent enough scorers that they can take games over.
That’s exactly what happened on Tuesday against the Columbus Blue Jackets. The Flames weren’t perfect, but they ended up with a pretty good result in a 6-2 victory over Columbus.

The first period was pretty even, with both clubs getting their looks and both teams fighting the puck a little bit, too. The Flames opened the scoring a couple minutes into the game. After a dump-in, Adam Ruzicka and Milan Lucic crashed the corner area to retrieve the puck. Lucic fed the puck to the point for Erik Gudbranson, and his shot from the point found a way through traffic – and Elvis Merzlikins’ pads – to give the home side a 1-0 lead.
The Flames added to their lead off a nice play and an unfortunate error. With the top line buzzing, Elias Lindholm began to cut to the net and tried to deliver a cross-slot pass. Defender Andrew Peeke attempted to block it, but the angle of his block swept the puck right into his own open net. That made it a 2-0 Flames lead.
But the Blue Jackets answered back before the end of the period. The Flames were caught up ice, Columbus forced a turnover and headed back on a three-on-two rush. They executed a very nice rush passing play, ending with a pinching Adam Boqvist beating Dan Vladar after collecting a rebound off a Patrik Laine shot to cut the Flames lead to 2-1.
Shots were 12-12 (all at five-on-five) and scoring chances 11-11 in the first period.
The Flames were all over Columbus in the second period, but the Jackets did a good job disrupting things at the last moment. Until late in the period that is.
Columbus tried to exit the zone with the Flames’ top line buzzing, but Lindholm intercepted a clearing attempt at the offensive blueline. He fed Matthew Tkachuk and he and Johnny Gaudreau executed a nifty passing sequence, ending with a back-door tap-in for Tkachuk to give the Flames a 3-1 advantage.
The Flames added another one in the final minute of the second period. With Blake Coleman in the penalty box, Andrew Mangiapane corraled a loose puck and headed towards the Columbus zone on a two-on-one rush with Dillon Dube. Dube opted to shoot, beating Merzlikins glove-side to give the Flames a 4-1 lead heading into the intermission.
Shots were 17-4 Flames (12-4 Flames at five-on-five) and scoring chances 9-3 Flames in the second period.
The Flames made it 5-1 midway through the third period. After Trevor Lewis induced a turnover, Ruzicka accepted a pass and strode into the offensive zone. He fired a shot that beat Merzlikins between the legs to boost the lead.
Zach Werenski scored later in the period off a bit of scrambly defending in the Flames zone to cut the lead to 5-2. But that’s as close as the visitors would get.
The Flames got that one back off a nice effort from the debuting Tyler Toffoli. Toffoli turned on the jets to collect a flip pass from Gaudreau, blasting past the defenders, cutting to the middle and beating Merzlikins to run the lead to 6-2 Flames. He received chants and a standing ovation.
Shots were 12-4 Flames (all at five-on-five) and scoring chances 9-5 Flames in the third period.

The Flames weren’t particularly bad at any point in this game, but they seemed to lack a bit of execution in the first period in all three zones and Columbus was able to take advantage of some lapses to generate zone time and scoring chances.
In the second period, the Flames tightened things up and took the game over.

Let’s give it jointly to the first line, as they were superb tonight and probably should’ve racked up more than just the three goals they scored as a unit.

The Flames never trailed in this one, but Dube’s shorthanded goal in the final minute of the second period was the goal that player sorely needed and also a gut-punch to a Columbus team that wasn’t nearly as bad as the score indicated.

Dube’s goal was his first in 13 games. His 18 previous shots on goal failed to go in.