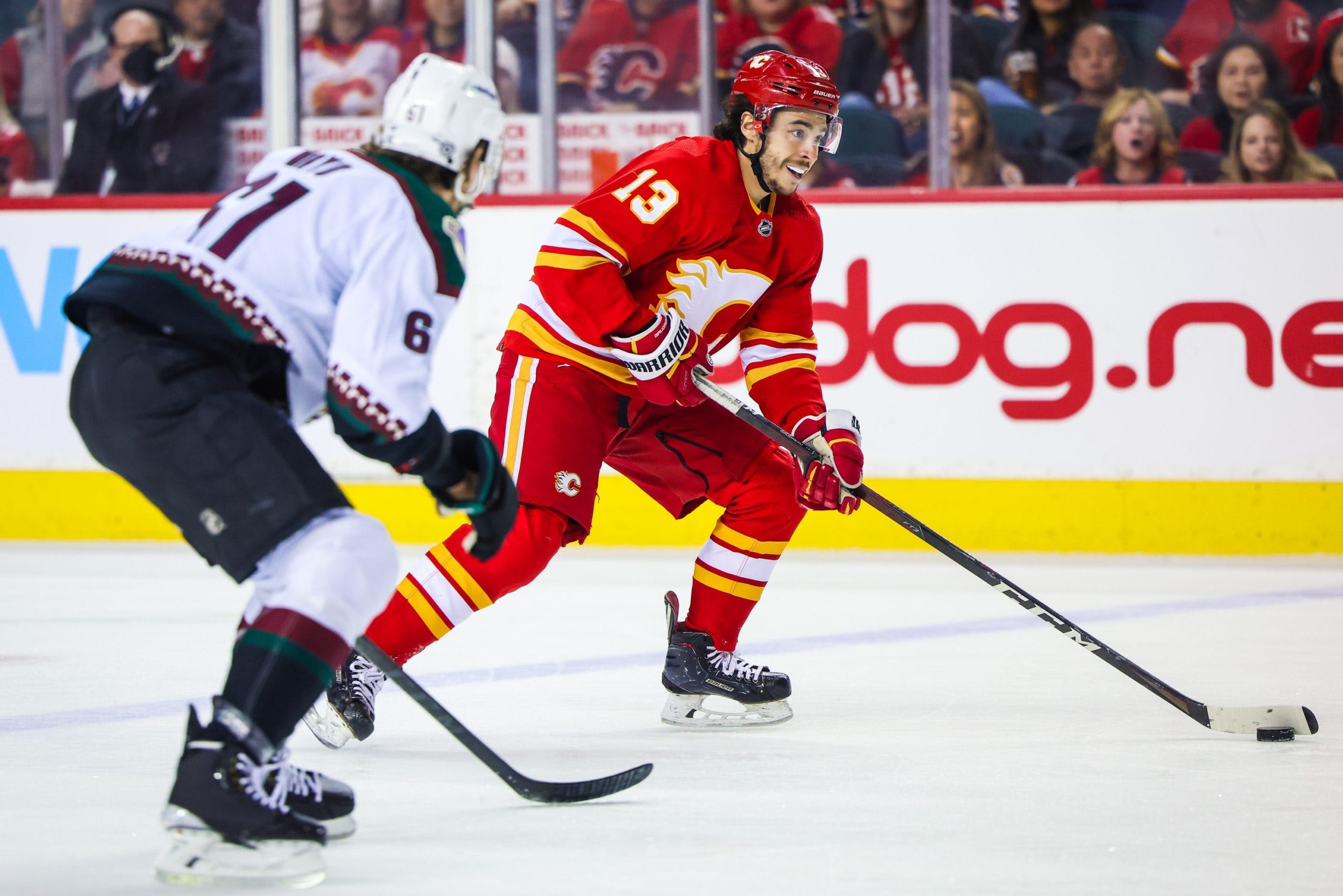 By Ryan Pike
8 months ago
The Calgary Flames weren’t perfect on Friday night when they hosted the Arizona Coyotes. Some of their puck-handling foibles were still on full display. But the Flames did a lot of smart things with the puck in the offensive zone, particularly in the second period, and that was enough to power them to a 4-2 victory over the Coyotes.

Neither team scored in the first period. The Flames had their moments offensively, but in general their puck management was less than stellar and it allowed the Coyotes to have quite a few good looks against Jacob Markstrom. Thankfully for the home side, Markstrom was up to the challenge.
Shots were 10-6 Coyotes (7-6 Coyotes at five-on-five) and scoring chances 5-5 in the first period.
The Flames feasted on the Coyotes a bit in the second period. 33 seconds into the period, the reunited top forward line cashed in. Johnny Gaudreau and Matthew Tkachuk executed a very tidy give-and-go play, which ended with Tkachuk chipping the puck over Arizona goalie Karel Vejmelka to give the Flames a 1-0 lead.
Rasmus Andersson drew a penalty a little later and the power play unit needed all of 15 seconds to make it 2-0 Flames. They won the initial draw, made some nice passes, and Elias Lindholm powered a one-timer past Vejmelka from the slot. (Note: It’s probably a bad idea to leave him open in the slot.)
Shayne Gostisbehere jumped into the rush for the Coyotes but he blew a tire at the Flames blueline. Nikita Zadorov grabbed the puck and sent Gaudreau and Blake Coleman in on a two-on-none rush. Gaudreau opted to shoot, beating Vejmelka to make it 3-0 Flames.
But the Coyotes answered back late in the period. Zadorov was carrying the puck behind the net but was pressured by the Arizona forecheck. He flung the puck into the slot, where Michael Carcone nabbed it and beat Markstrom to cut the lead to 3-1.
Shots were 15-4 Flames (11-2 Flames at five-on-five) and scoring chances 11-4 Flames in the second period.
The Flames seemed to put things out of reach midway through the period on the power play. With Arizona changing penalty killers, Andersson opted to drive the net himself from the neutral zone rather than wait for his teammates to get organized. It worked, and he deked out Vejmelka and beat him between the pads to give the Flames a 4-1 lead.
Vladislav Kolyachonok jumped into an odd-man rush late in the game and beat Markstrom to cut the lead to 4-2. But that’s as close as the Coyotes managed to get.
Shots were 12-4 Flames (9-3 Flames at five-on-five) and scoring chances 6-4 Flames in the third period.

The Flames were a bit leaky defensively at various points, and they turned the puck over a bit too much in the opening period. But they made smart adjustments – both to their lines and their tactics – and that allowed them to do a lot of good things in the second and third periods.
Playing a loose, energetic Arizona team with no pressure on them, the Flames were decisively the better team.

Offensively, Gaudreau remains the heartbeat of this hockey club. He was superb on this occasion. But give stick-taps to Markstrom and Andersson, as well. Markstrom was sharp early on when the Flames were figuring things out, and Andersson had a goal and drew a couple penalties as well.

The first half of the second period saw the Flames shellack the Coyotes’ zone with shots, scoring chances and goals. The Coyotes had no answer for the Flames, and that stretch of excellent play by the Flames’ skill players decided the game.

The Flames (39-17-8) are back on Saturday night when they host the Edmonton Oilers.
Via Pat Steinberg: As of this writing, the Flames’ magic number to clinch a playoff berth is now 9.5 – any combination of 9.5 Flames wins or Vegas losses clinches a post-season spot for Calgary.