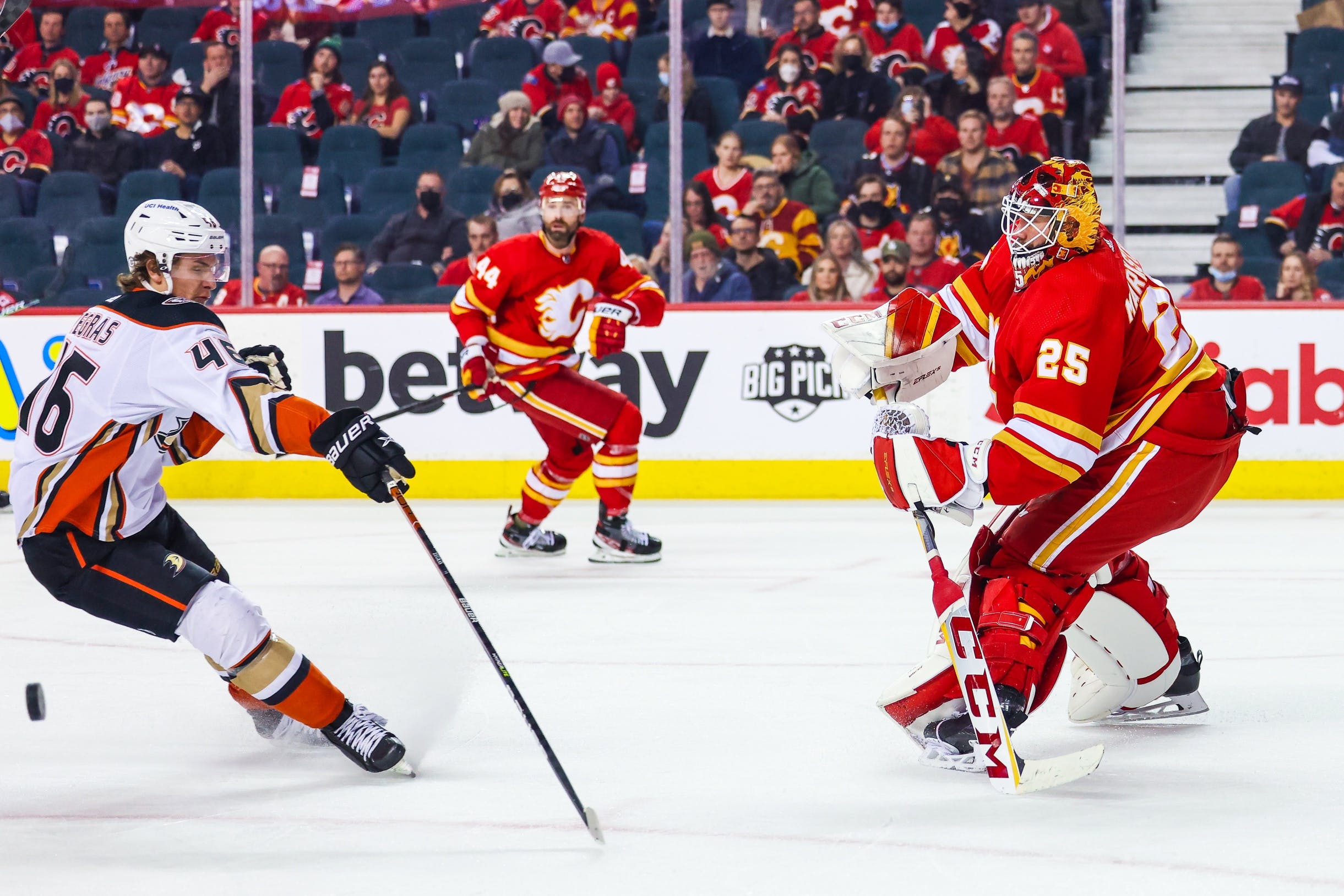 By Ryan Pike
9 months ago
After hosting (and beating) Columbus on Tuesday night, the Calgary Flames hosted the Anaheim Ducks on Wednesday evening at the Saddledome. While the Flames didn’t play a flawless 60 minutes of hockey, they scored first, never trailed in the game, and played pretty smart hockey for the most part.
They out-worked the Ducks en route to a 6-2 victory, extending their winning streak to eight consecutive games.

The Flames started this game on the wrong foot, as Elias Lindholm was called for a double-minor for high-sticking 34 seconds in. But the Flames killed off those penalties, and then opened the scoring shortly afterwards.
Rasmus Andersson fired the puck from the point and it was redirected in the slot by Dillon Dube for his second goal in as many games, which made it 1-0 Flames.
The Flames upped their lead to two goals later in the period on the power play. The Flames cycled the puck and Matthew Tkachuk’s shot from the face-off circle was tipped by Lindholm and trickled through John Gibson’s pads and crept across the goal line to make it 2-0.
Shots were 12-12 (9-5 Ducks at five-on-five) and scoring chances 8-4 Ducks.
The Ducks answered back in the second period, though. The team was caught flat-footed as the Ducks used their speed through the neutral zone to generate a clean zone entry. Sonny Milano snuck behind both Noah Hanifin and Tyler Toffoli, received a clean pass from Isac Lundestrom, and beat Jacob Markstrom with a wrist shot to cut the lead to 2-1.
But the Flames followed Anaheim’s goal with two goals over a span of 42 seconds to take the game over. First, with the two teams playing four-on-four, Lindholm made a lot happen by himself. He generated a zone exit, went through the neutral zone with speed, banked the puck off the side boards in a way that generated a bounce into the slot, and he buried his own pass past Gibson to make it 3-1 Flames.
The Flames’ penalty expired, so they had a brief power play after Lindholm’s goal. On a rush right after getting the advantage, they cashed in. Johnny Gaudreau drove into the offensive zone, waited for a streaking Matthew Tkachuk, and found him for a quick pass-and-shoot that made it 4-1 Flames.
Anthony Stolarz took over in Anaheim’s net midway through the second period.
Shots were 12-7 Flames (6-4 Flames at five-on-five) and scoring chances 4-4 in the second period.
The Flames had a power play early in the third period where the Ducks got a couple great chances. On the first, Markstrom made a diving stick save to maintain the three goal Calgary lead. On the second, Lundestrom intercepted an errant pass and drove the Flames net on his own and beat Markstrom to cut the Flames lead to 4-2.
But that’s as close as the visitors got. Gaudreau scored an empty-netter in the dying minutes of the game to make it a 5-2 Flames lead. Andrew Mangiapane fired home a rebound (past Stolarz, who had returned to the net) a little later to give the Flames a 6-2 advantage, which held up as the final.
Shots were 19-9 Flames (13-5 Flames at five-on-five) and scoring chances 13-1 Flames in the third period.

Darryl Sutter has remarked in the past “If you don’t have your A-game, you better have a good B-game.” Well, the Flames weren’t at their best, playing a well-rested opponent on the second half of a back-to-back. But the Flames might not have been perfect, but they were structured, battled well and executed reasonably well, and that gave them a chance to get the win.
Case in point? Their special teams. Their penalty kill did a ton of good work early, even when missing Lindholm and Hanifin for big stretches, and their power play scored twice (and also allowed a shorthanded goal).

Lindholm scored twice and the second was an absolute beauty, so he gets the nod. But give the honourable mention to Rasmus Andersson, who had three assists.

Two goals in 42 seconds in the second period grabbed the game for the Flames.

Hanifin briefly left game after blocking a shot with his left leg, but returned. Tanev briefly left game for repairs after taking a stick to the face.
There was a weird penalty call in the first period. Adam Ruzicka bloodied Kevin Shattenkirk with an elbow to the side of his head on an attempted check behind the net. It was initially called a high-sticking double minor (under Rule 60, “high-sticking”) due to the blood, but it was reviewed and changed to an elbowing minor (under Rule 45, “elbowing”) despite Shattenkirk being bloodied on the play. (Perhaps a bloodied player isn’t considered injured enough to constitute a major.)
Milan Lucic fought Nicolas Deslauriers in the first period.

The Flames (28-13-6) have a couple days to breathe. They’re back on Saturday night when they welcome Mark Giordano and the Seattle Kraken to town.