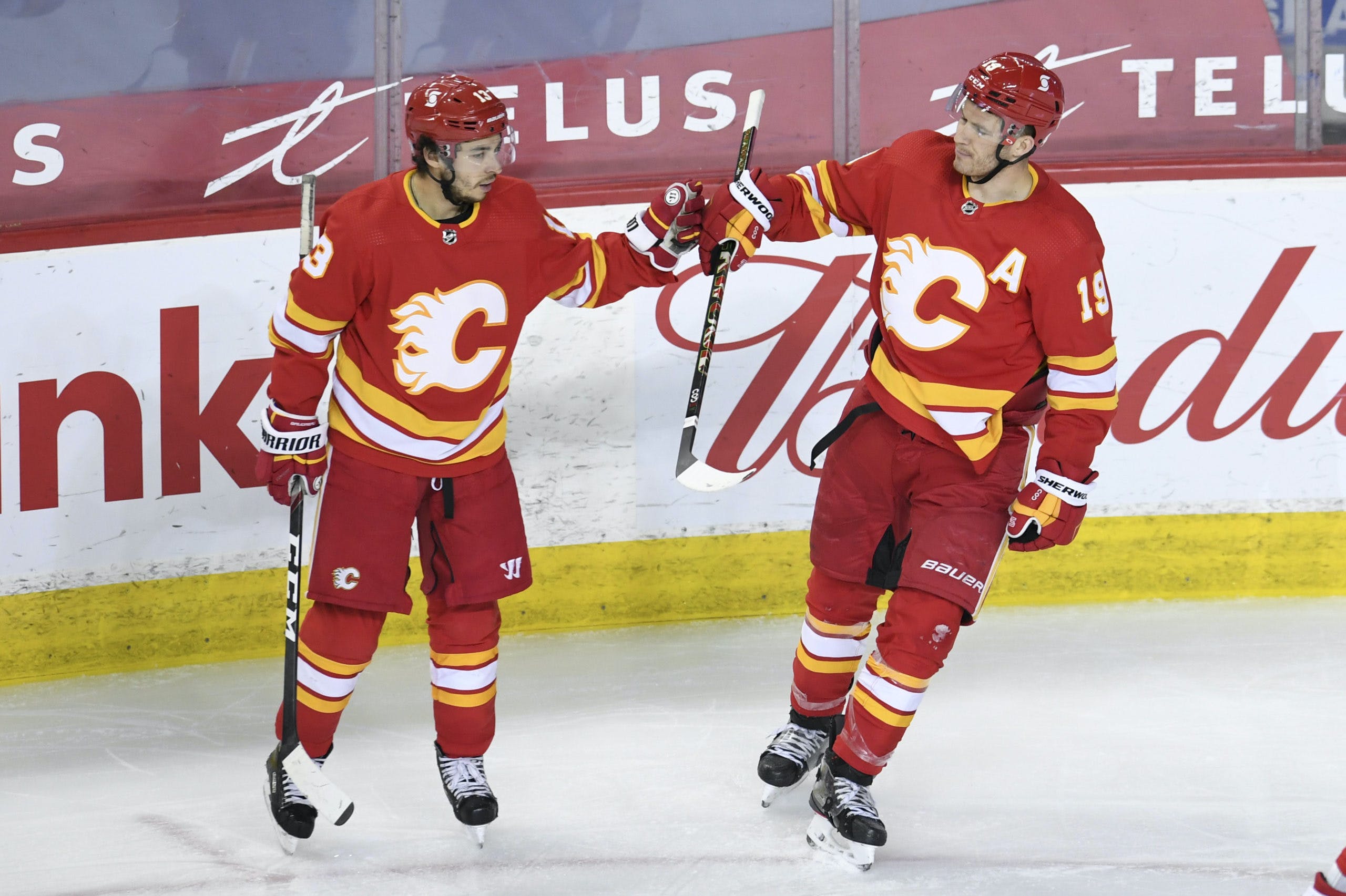 By Ryan Pike
10 months ago
The Calgary Flames have completed 35 games of their 2021-22 regular season schedule, the equivalent of five seven game segments. Their fifth segment saw them go 3-4-0 over seven games, capturing six of a possible 14 points.
Underlying numbers via Natural Stat Trick.
Previous segments:

(Percentage stats in this table are 5v5 and via Natural Stat Trick.)
Across the board, in virtually every possession metric, the Flames were collectively a little bit worse this segment than they were in the segment prior. They were also, on a percentage basis, a little bit better at burying their chances at five-on-five but got shakier goaltending. They were propped up rather nicely by their special teams performances, though: their power play out-scored opposing power plays 5-4.
The Flames played four strong teams and three weaker teams this segment. They lost once to a weaker team but beat a stronger team, so their record seems to be roughly what you would expect to see given their performances to this point in the season.
If you place the playoff cut line at 95 points, the Flames would need about 41 points (40.5) after 35 games to be on track. They have 42 points so far, still roughly one point ahead of a playoff pace. (A few models are placing the playoff cut line lower than 95 points, so the Flames may or may not be at a playoff pace depending on whatever model you prefer to use.)

Here’s how the Flames compare within the Pacific Division through 35 games (all rankings out of eight teams):
The Flames were a little bit better offensively but a little bit worse defensively this segment than in the season to date, but overall they’re still one of the better defensive teams in hockey. They also have a very effective penalty kill – which is good, because they’re taking more penalties lately than is ideal.
Overall, the Flames are top three in the division in just about everything. The things that are troublesome are their penalties and their shooting percentage.

First, the forwards (all situations, ordered by ice time). Last segment’s figures are in brackets.
Game scores: Positive values indicate positive impact, negative values reflect negative impact.
The most common Flames forward lines were (in descending order):
The Flames shuffled around their second, third and fourth lines quite a bit over the past seven games, with Backlund and Coleman seeing a lot of different linemates.
A few players took slight steps forward (by expected goals percentage) in the past segment: Gaudreau, Lindholm, Tkachuk, Coleman and Lucic most prominently. Several players took steps back, though: Mangiapane, Dube, Monahan and Pitlick in particular.
From a game score perspective, Gaudreau and Tkachuk were exceptional in the last segment. They combined for 25 points, and individually they scored seven (Tkachuk) and eight (Gaudreau) more points than anybody else on the team. (It was Gaudreau’s third double-digit points segment of the season.) Lindholm was also quite good.
Everybody else within the forward ranks averaged out to have little-to-no positive impact, and some were below replacement level. Yes, looking at PDO it appears that some of that was rough puck luck for basically everybody below the first line, but the depth players didn’t really do enough to overcome their puck luck offensively.
Now, the defence (all situations, ordered by ice time):
The most common defensive pairings were (in descending order):
The defensive pairings have been set in stone for the past while.
Kylington had a very good segment. Andersson and Hanifin had a rough segment. Everybody else was perfectly fine. As with the forwards, rough puck luck dragged down a lot of players here, but it was not the only culprit behind some rough performances.
And finally, goalies (all situations):
A .901 save percentage was the better of the two Flames’ goaltenders, which is basically everything you need to know about the past seven games from a netminding standpoint. Both goalies needed better results against high-danger chances, but bear in mind that the Flames were playing from behind in a lot of games and gave up a lot of high-danger chances as a result.
Better defensive performances will likely help their goaltenders be sharper against high and medium danger opportunities.