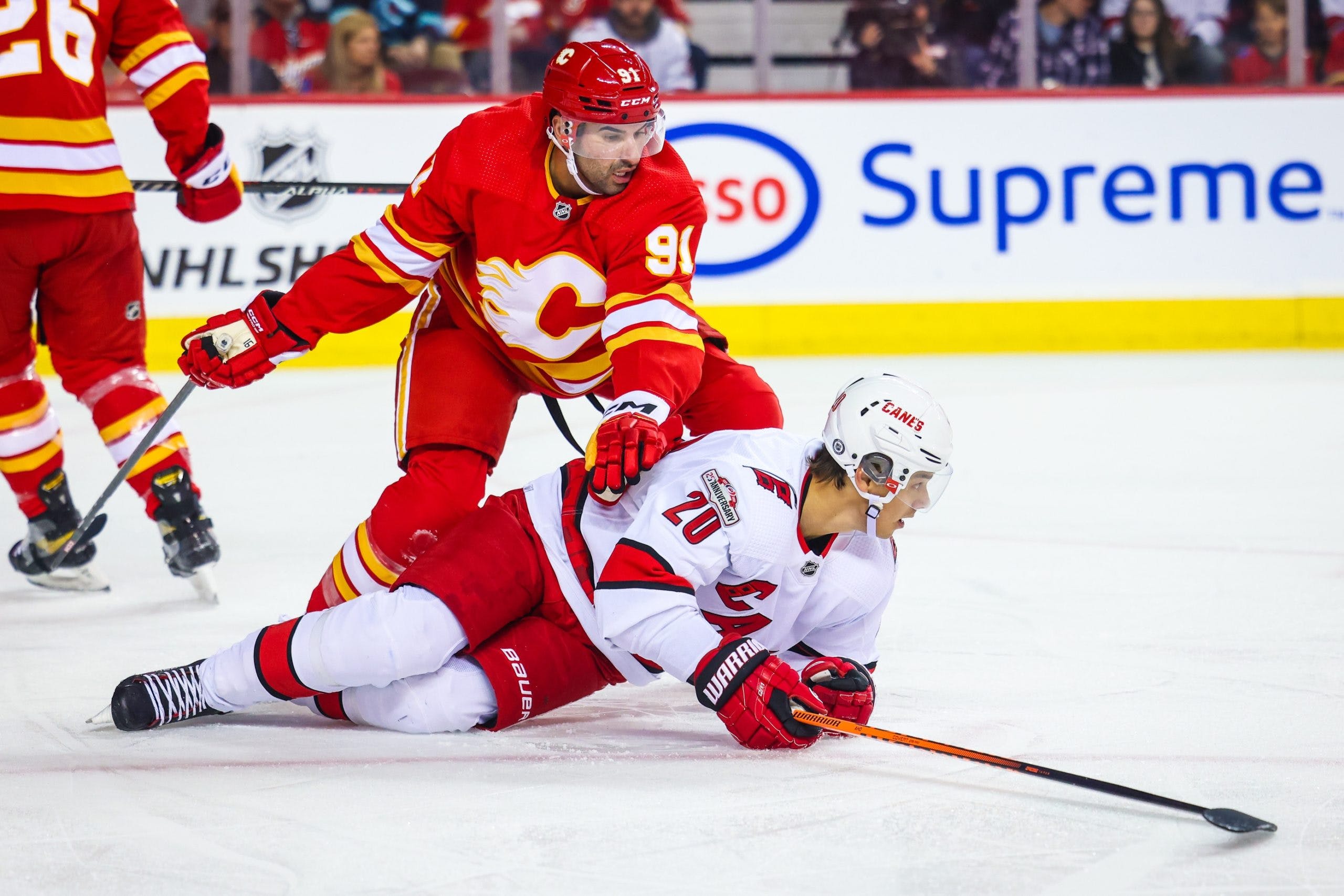 By Ryan Pike
2 months ago
After a loss against the Edmonton Oilers on Saturday night, the Calgary Flames hit the practice ice on Monday morning with a brand new look for their forward group. As detailed on Twitter by our pal Pat Steinberg, the Flames unveiled four new forward lines.
Here are the new trios:
(Kevin Rooney skated as the extra forward.)
Let’s take a look at the four lines and the likely logic behind them.

This is a brand-new trio. Of the three, only Mangiapane was part of the Flames before this season. However, Kadri and Mangiapane were together in the “old” second line and worked quite well, while Huberdeau and Kadri have played together on the first power play unit (and have been pretty productive as a duo).
On its face, this is ostensibly the Flames putting their best three players together, but Kadri and Mangiapane’s puck retrieval skills and scoring prowess around the net seem to be a good match for Huberdeau’s puck distribution skills.

As a trio, these guys have only played about 4:05 together at five-on-five (via Natural Stat Trick), but the three pairings that make up the trio have all played a decent amount together: Lindholm/Toffoli 91:46, Lindholm/Lucic 76:01 and Toffoli/Lucic 70:07. Toffoli and Lucic played together after Toffoli’s arrival from Montreal and they go way back to the Los Angeles days.
Lucic can help Lindholm with left-side face-offs here and there, and generally this line has a trio of guys that can shoot the puck. This grouping does put a lot of emphasis on Lindholm’s two-way play and puck management, though.

This trio has played 14:37 together over the past three seasons, but the results have been quite strong – over 70% in most meaningful possession metrics. Moreover, the three pairing combinations have all played together a ton: Dube/Coleman 176:37, Dube/Backlund 222:51 and Backlund/Coleman 669:27.
Backlund’s line is always the tough minutes trio by default, but this grouping really seems like it could seek out the tough assignments and still move the puck in the right direction.

Ruzicka gets into the mix on the fourth line, playing with two guys he played together with last season during his rookie campaign. As a trio, these guys have played 27:19 together – the most of the new groups – but Ruzicka/Ritchie have 26:43 under their belt together, Ruzicka/Lewis 142:22 and Lewis/Ritchie 111:20.
Idea seems to be to stick Ruzicka with a couple good forecheckers, which worked last season, and Lewis can take right-side face-offs to spell off Ruzicka.
All-in-all, the most “new” partnerships involved in the new lines are on the first line, while the remainder of the other linemates have played together a good amount in various combinations.
Which new Flames line is your favourite? Which one do you like the least? What would you have done to shake up the forward units? Let us know in the comments!
Editorials
Recent articles from Ryan Pike