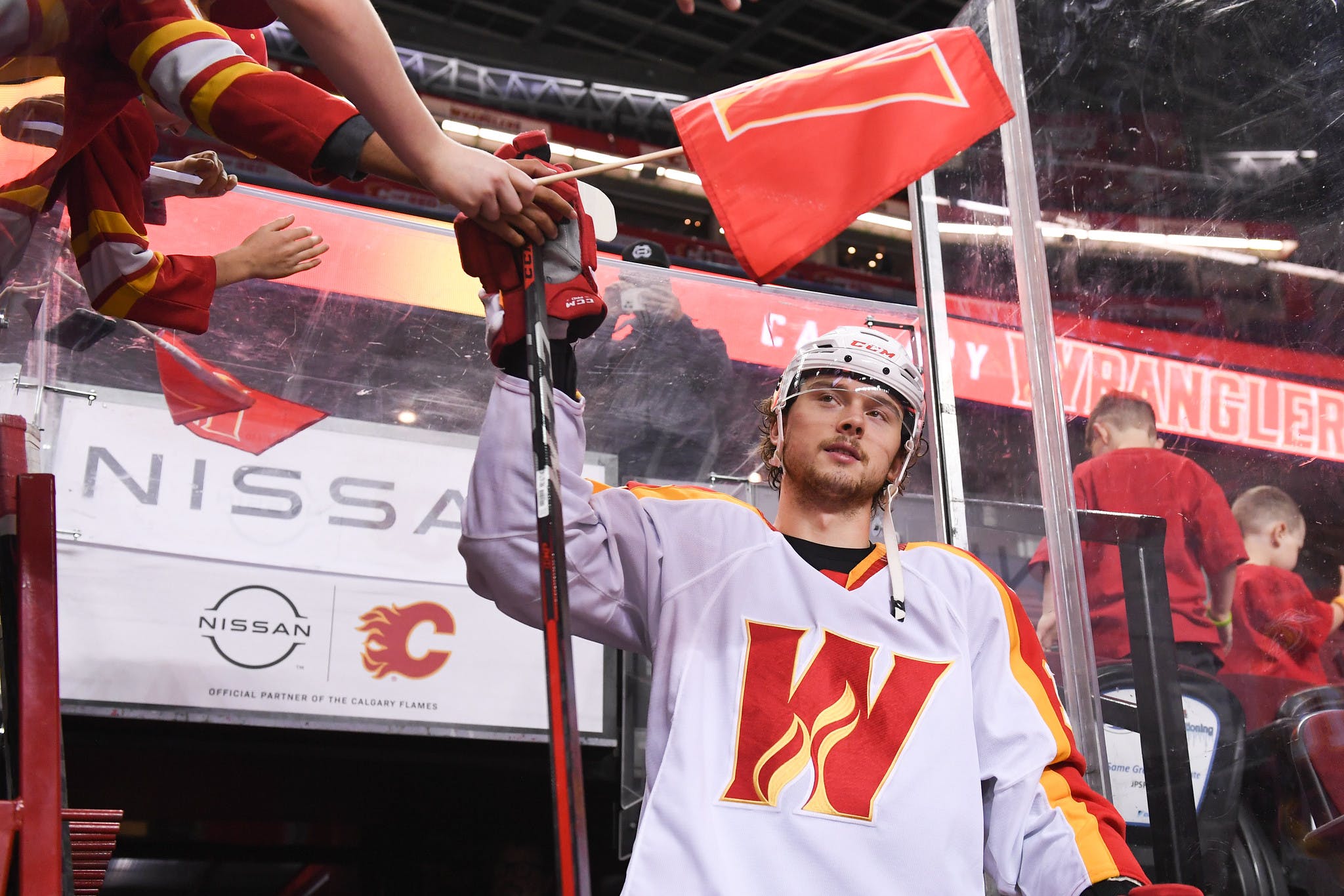 By Paige Siewert
1 month ago
This is less of a series preview and more of a series continuation from the Wranglers and Gulls’ match-up in San Diego last weekend. The Wranglers took both games on the road outscoring the Gulls, 13-3. The Wranglers return home to host the Gulls for their third and fourth games in a row against each other on Friday night and Sunday afternoon.

There were some movements within the Flames organization that will directly affect the Wranglers going into the weekend. Most notably, was the recall of Matthew Phillips up to the Flames. This has been years in the making and hockey twitter rejoiced. Phillips has only played one game in the NHL back in the 2020-21 season when the Flames were statistically out of the playoffs and playing makeup games against Vancouver due to Covid-19 delays.
The corresponding moves include the Flames placing Kevin Rooney on waivers and that could open the door for another call-up from the Wranglers. Likely Radim Zohorna. To add some Wranglers depth, they also included the Rapid City Rush in the action. Rory Kerins is back alongside Ilya Nikolaev to fill in some gaps in forward depth.

Last weekend, we were expecting a reunion between Justin Kirkland, Glenn Gawdin and the Wranglers, formerly the Stockton Heat. Both Kirkland and Gawdin were instrumental in Stockton’s success last season. It turned out the only one to hit the ice against his former squad was Kirkland. Gawdin has gotten some NHL time this season but his absence was confirmed by the Gulls to be due to injury. No set timeline for his return so there is a small chance we might catch him in a game or two this weekend.
The Wranglers hold all the momentum in this weekend’s series not only due to the fact they’ve won their last two games against the same team but also due to the standings. Calgary has worked their way up to second in the Pacific Division just under the Colorado Eagles while San Diego sits at dead last with only five wins on the season. It’s going to be a real case of not playing down to the level of their opponents for Calgary.
Calgary’s best continue to be their best with Matthew Phillips hitting 30 points last weekend and as the first player in the league to do so. He is on an active scoring streak of eight straight games that will go on pause as he finally caught the attention of the Flames and earned his long-awaited call-up. His linemate, Jakob Pelletier, ended his insane 11-game scoring streak last Saturday when he was not among any of the six goals scored in their last game.
Dustin Wolf is also contributing to his league-leading abilities. He earned his second shutout of the season last Saturday stopping all 17 Gulls shots. Wolf leads the league in shutouts and wins with 12 on the year. Wolf started in both games last weekend and with six days between games, it’s likely he will do the same this weekend.
You can catch these games on Friday night and Sunday afternoon at the Scotiabank Saddledome at 7:00 p.m. MT on Friday and 1:00 p.m. MT on Sunday. You can catch these games in person or stream them on AHL.TV. Sunday’s game is AHL.TV’s free game of the week so you can watch that one even if you are not subscribed this season. FlamesNation contributors Mike Gould and myself will have game updates for you on Twitter.
News
Recent articles from Paige Siewert