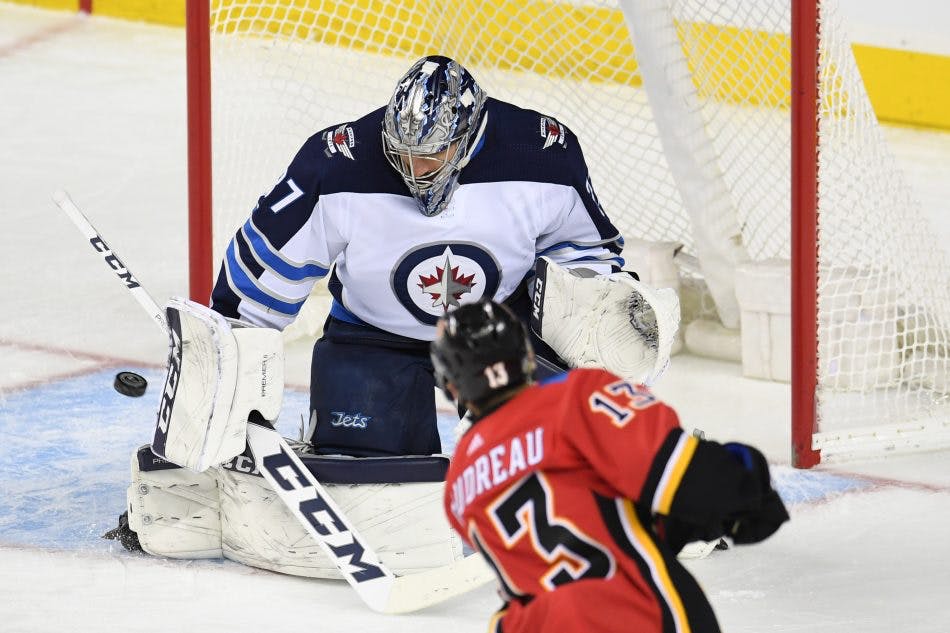 By Ryan Pike
1 year ago
For the fifth time this season – and the fourth time in their last five games – the Calgary Flames (5-5-1, 11 points) face off against the Winnipeg Jets (7-3-1, 15 points)! It’s likely the Jets debut of Pierre-Luc Dubois! It’s also the last time the two teams see each other until Mar. 26… at which point they’ll play three times in four days.
The action starts at 8 p.m. MT on Sportsnet West and Sportsnet 960 The Fan!
For a view from the other side, check out our frenemies over at JetsNation!

Projected lines, via Daily Faceoff:
Tkachuk – Lindholm – Dube
Gaudreau – Monahan – Bennett
Lucic – Backlund – Mangiapane
Nordstrom – Froese – Leivo
Giordano – Andersson
Hanifin – Tanev
Valimaki – Nesterov
Jacob Markstrom starts for the Flames, backed up by David Rittich. Their active extras are Brett Ritchie and Dominik Simon. Their taxi squad is Louis Domingue, Michael Stone, Connor Mackey, Oliver Kylington, Zac Rinaldo and Buddy Robinson.
The Flames won a game on Saturday, beating Edmonton in a really entertaining 60 minutes of hockey that featured the Flames making some tactical adjustments after being quite bad in the first period. It’d be nice if they could have a better start, but let’s give a thumbs-up to small improvements. Now, they’re eying a 60 minute effort against a team they’ve played so much that they probably see them in their nightmares.
The fourth line barely played a lick against Edmonton, but given Winnipeg’s depth they may be needed more frequently than they were.

Projected lines, via Daily Faceoff:
Copp – Scheifele – Ehlers
Connor – Dubois – Lewis
Vesalainen – Stastny – Wheeler
Perreault – Lowry – Appleton
Morrissey – Beaulieu
Forbort – Pionk
Stanley – DeMelo
Connor Hellebuyck starts for the Jets, backed up by Laurent Brossoit. Their active extras are Anton Forsberg, David Gustafsson and Sami Niku. Their taxi squad is Dylan Samberg, Ville Heinola, Nelson Nogier and Dominic Toninato.
Let’s all welcome Pierre-Luc Dubois to the (Scotia NHL) North Division. He hasn’t played a game since playing 3:55 against Tampa Bay way back on Jan. 22. Will he be rusty? Will he be fresh? Will he be awesome? Expectations are high for Dubois, and his addition makes the Jets incredibly deep up the middle and a really versatile, dangerous team. (His addition pushes Adam Lowry to the fourth line, for Pete’s sake!)

If you peruse most standings projections, it becomes apparent that 65 points probably gets you into the playoffs. That’s a 32-23-1 record, or thereabouts, or a .580 points percentage.
The Flames have a 5-5-1 record and 11 points. To hit 65 points, they need 54 points in their remaining 45 games – the equivalent of a .600 points percentage.

The Flames are without Derek Ryan.
The Jets are without Bryan Little, Jansen Harkins and Nate Thompson. Tucker Poolman is non-roster after clearing the COVID protocols.