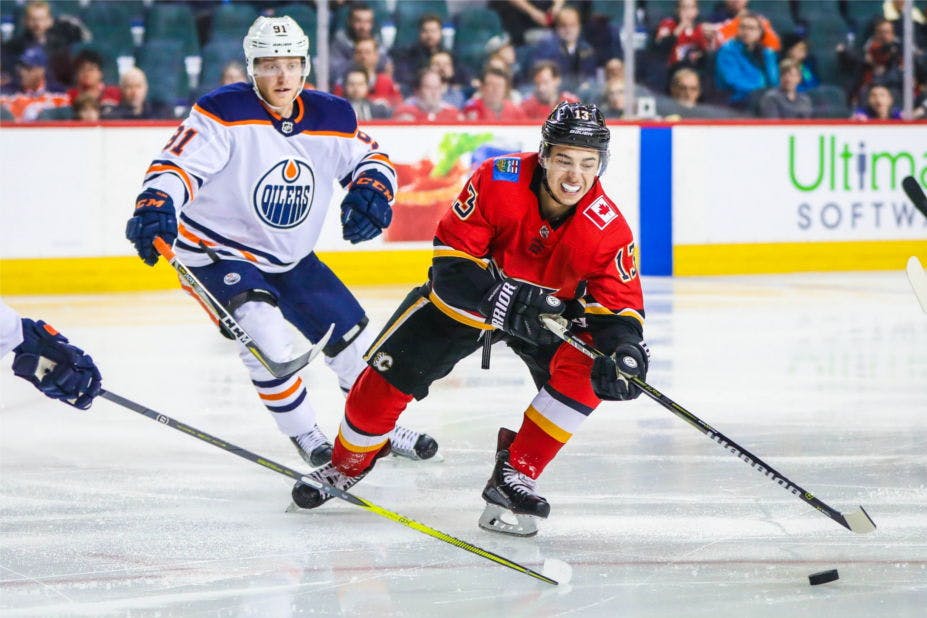 By Ryan Pike
1 year ago
In the aftermath of the Darryl Sutter news, the Battle of Alberta is somehow a bit of an afterthought. But the Calgary Flames (11-11-2, 24 points) are seeking to creep towards the playoff cutline (and above .500) tonight when they visit Rogers Place to face the Edmonton Oilers (14-11-0, 28 points). Since these teams last met (a 7-1 Edmonton win), the Flames are 3-2-1 and the Oilers are 2-3-0. Can the Flames get a couple wins before Sutter arrives on Monday?
The action starts at 8 p.m. MT on CBC and Sportsnet’s national feed and Sportsnet 960 The Fan!
For a view from the other side, check out OilersNation!

Projected lines, via Daily Faceoff:
Tkachuk – Lindholm – Dube
Gaudreau – Monahan – Leivo
Lucic – Backlund – Mangiapane
Nordstrom – Ryan – Ritchie
Giordano – Andersson
Hanifin – Tanev
Valimaki – Nesterov
Jacob Markstrom starts for the Flames, backed up by David Rittich. The projected active extras are Oliver Kylington and Brett Ritchie. The taxi squad is Louis Domingue, Michael Stone, Dominik Simon, Derek Ryan, Buddy Robinson and Zac Rinaldo. (Ryan will be activated for the game.)
The Flames are temporarily being coached by assistant Ryan Huska, so don’t expect the group to look too different tactics or systems-wise from their game against Ottawa. Aside from some defensive sloppiness later in the game, they were excellent in a 7-3 win. If they can bring that level of attention to detail to this weekend’s pair with Edmonton and Ottawa, they could set the table nicely for their new head coach.

Projected lines, via Daily Faceoff:
Nugent-Hopkins – McDavid – Puljujarvi
Kahun – Draisaitl – Yamamoto
Shore – Archibald – Khaira
Chiasson – Haas – Neal
Nurse – Barrie
Russell – Larsson
Jones – Bear
Mike Smith starts for Edmonton, backed up by Mikko Koskinen. Their projected extras appear to be Joakim Nygard, Kyle Turris and Evan Bouchard. The taxi squad is Dylan Wells, Theodor Lennstrom, Devin Shore and Patrick Russell.
The Oilers lost three games to Toronto… by a combined score of 13-1. Their big guns were silent, and the whole team will be looking to show that the past few games were a blip and not a sign of the team’s overall tendencies.

The Flames are healthy.
The Oilers are without Alex Stalock, William Lagesson, Zack Kassian, Oscar Klefbom and Slater Koekkoek.