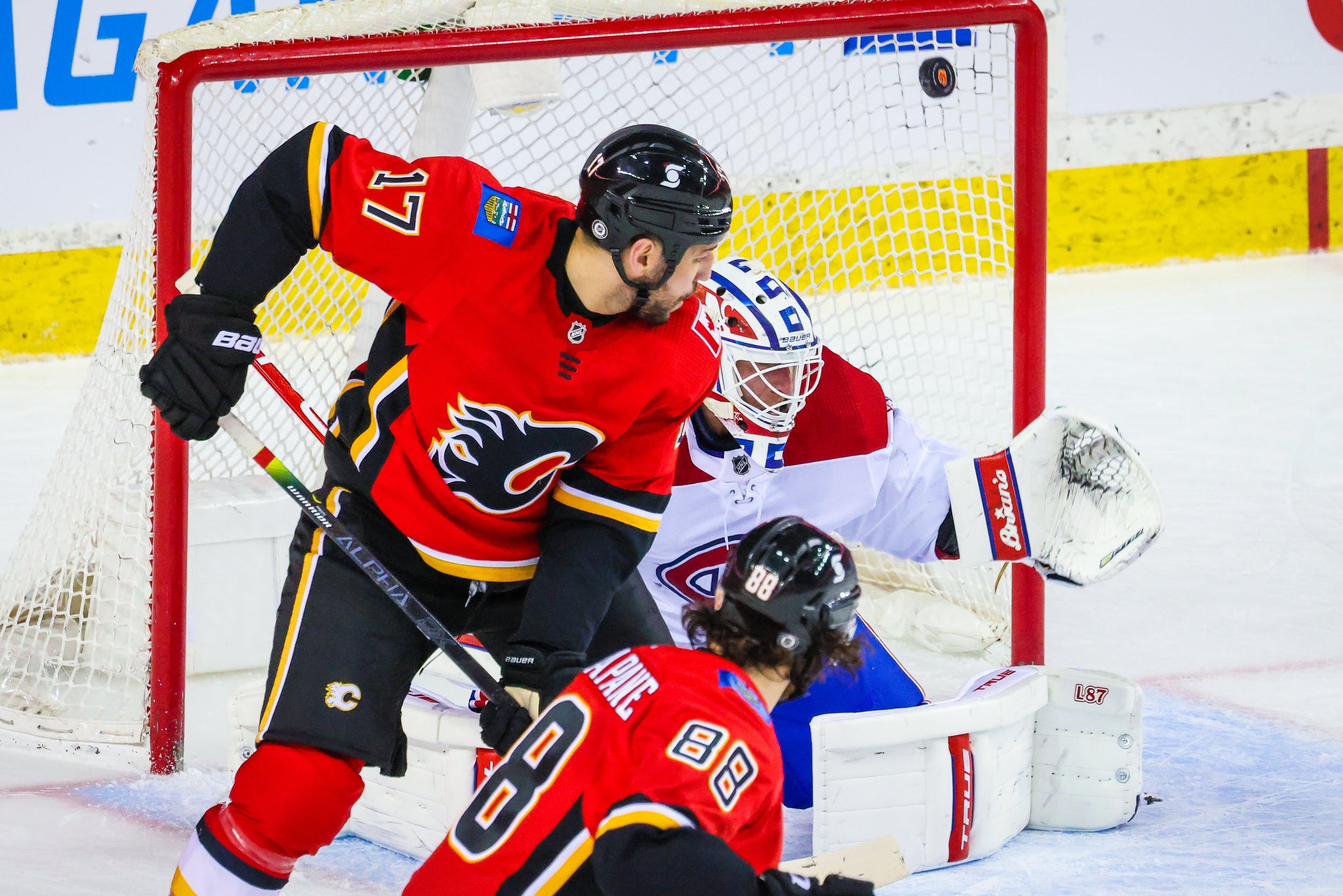 By Ryan Pike
1 year ago
A few days ago, the Calgary Flames (21-23-3, 45 points) had fairly faint playoff hopes. But through two big wins over the slumping Montreal Canadiens (20-17-9, 49 points), the Flames are just four points behind the Habs for the final playoff spot in the North Division. Can the Flames finish off a crucial sweep with another regulation win? And can they do it without the services of Noah Hanifin?
The puck drops just after 4:30 p.m. MT and you can catch the game on Sportsnet West or on Sportsnet 960 The Fan.

Projected lines, via Daily Faceoff:
Tkachuk – Lindholm – Dube
Gaudreau – Monahan – Mangiapane
Lucic – Backlund – Ritchie
Nordstrom – Ryan – Robinson
Giordano – Tanev
Valimaki – Stone
Nesterov – Andersson
Jacob Markstrom starts, backed up by Louis Domingue. The projected extras is Oliver Kylington, while Josh Leivo (COVID-19 protocol) and Noah Hanifin (injury) are unavailable. The taxi squad is Artyom Zagidulin, Zac Rinaldo, Byron Froese, Glenn Gawdin and Dominik Simon.
It’s the first game this season that the Flames will be without Noah Hanifin, who is reportedly done for the season. But the Flames have been pretty good lately, with wins in five of their past seven games over the last two weeks. They’ll need another tight-checking, poised 60+ minutes of hockey if they hope to inch closer to Montreal in the standings.

Projected lines, via Daily Faceoff:
Tatar* – Danault – Anderson
Toffoli – Suzuki – Perry
Lehkonen – Kotkaniemi – Armia
xx – Staal – Evans
Chiarot – Weber
Edmundson – Petry
Romanov – Merrill
Gustafsson
Jake Allen starts for the Habs, backed up by Cayden Primeau. Their extras are Carey Price (injured), Jonathan Drouin (illness), Paul Byron (injured) and Brett Kulak. Their taxi squad is Charlie Lindgren, Xavier Ouellet, Cole Caufield and Michael Frolik.
Reports are that Cole Caufield will debut tonight, which would only be possible if another player has been injured (so he can be recalled under emergency conditions. (Tomas Tatar didn’t finish the game, so he’s a probable target.)
In the same span where the Flames have won five of seven, Montreal has won three of nine. Losing Brendan Gallagher has done a lot to destabilize the club’s rhythm, and their string of other injuries and maladies certainly hasn’t helped.

The Flames are without Josh Leivo and Noah Hanifin.
The Canadiens are without Carey Price and Brendan Gallagher. (And potentially without Paul Byron and Jonathan Drouin, as well.)

The Flames have won six of their first eight games against Montreal. This is their final meeting of the season.