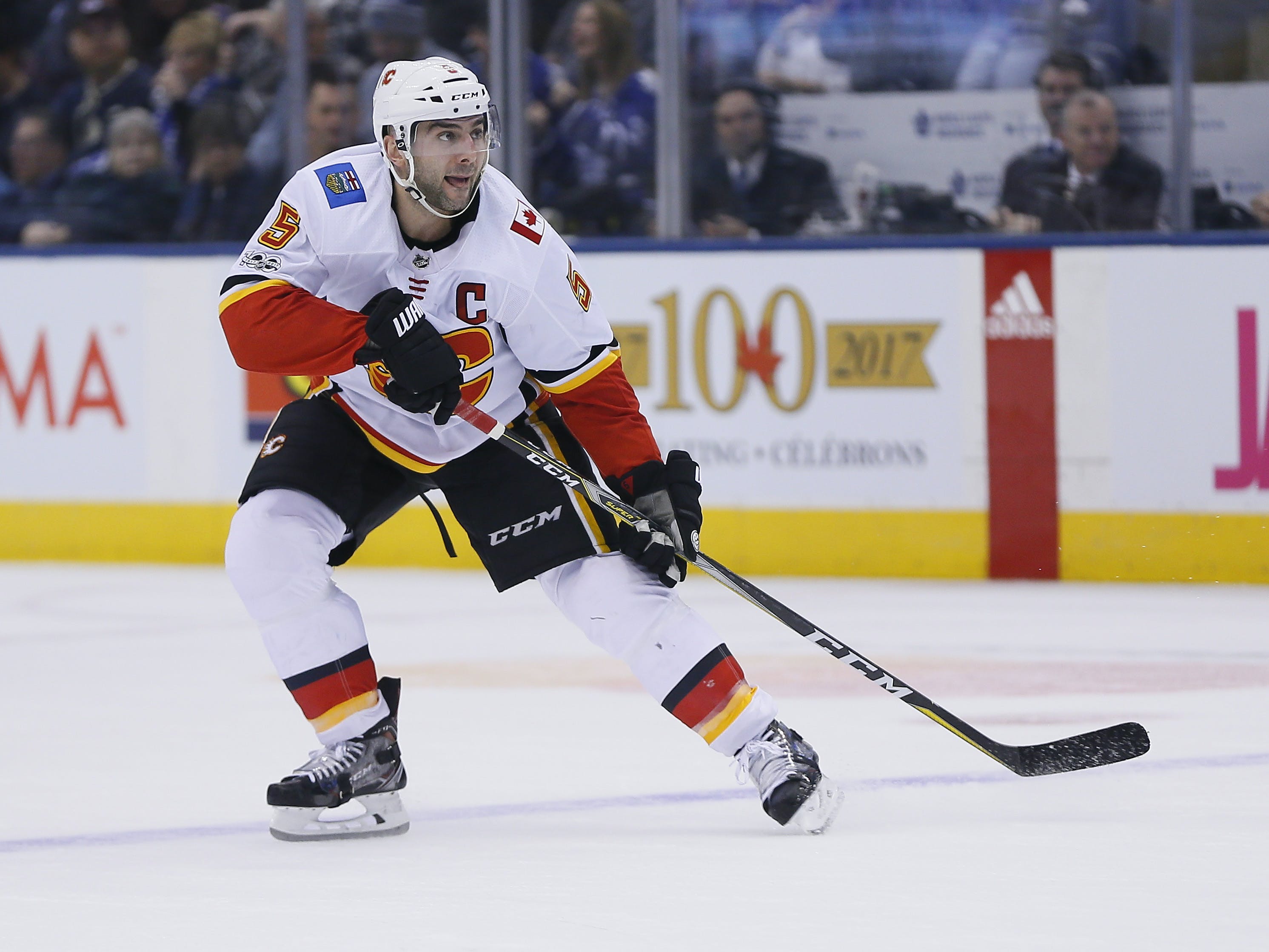 By Ryan Pike
1 year ago
Two days after their first match-up, the Calgary Flames (2-1-1, 5 points) host the Toronto Maple Leafs (5-2-0, 10 points) to complete a quick pair of games between the clubs at the palatial Scotiabank Saddledome! The Flames were just a smidge less good than the Leafs on Sunday afternoon, with the bounces proving the difference. Can the Flames bounce back and head on the road with two key points in the North Division playoff race?
The puck drops just after 7 p.m. MT and you can catch the action on Sportsnet One or on Sportsnet 960 The Fan.
For a view from the other side, visit the fine folks over at Leafs Nation!

Projected lines, via Daily Faceoff:
Mangiapane – Lindholm – Tkachuk
Gaudreau – Monahan – Simon
Bennett – Backlund – Leivo
Lucic – Ryan – Nordstrom
Giordano – Andersson
Hanifin – Tanev
Valimaki – Nesterov
Jacob Markstrom starts for the Flames, backed up by David Rittich. The taxi squad is Louis Domingue, Connor Mackey, Oliver Kylington, Zac Rinaldo, Derek Ryan and Buddy Robinson, though Ryan is expected to be activated for the game as he has for every game so far. All indications are that the Flames will be without Dillon Dube for the second game due to a lower body injury.
The Flames suffered their first regulation loss of 2020-21 on Sunday afternoon, but they really had nothing to feel too bad about – perhaps they’d like the late second period penalty that led to the second Leafs goal, but that might be it. If the Flames play the way they did against the Leafs for every game for the rest of the season, they’ll win more often than not. The key for them will be to retain that consistency and perhaps put more pucks on net, something head coach Geoff Ward suggested they do in his post-game media chat on Sunday.

Projected lines, via Daily Faceoff:
Hyman – Tavares – Nylander
Simmonds – Kerfoot – Mikheyev
Marner – Matthews – Vesey
Boyd – Engall – Anderson
Rielly – Brodie
Muzzin – Holl
Lehtonen – Bogosian
After Jack Campbell started on Sunday and seemingly tweaked something in his lower body (before Matthew Tkachuk fell on him), it sounds like Frederik Andersen starts for Toronto (with Michael Hutchinson being activated from the taxi squad to back up). Compared to Sunday’s roster it’s Jason Spezza, Alexander Barabanov and Travis Dermott out in favour of Joey Anderson, Travis Boyd and Mikko Lehtonen.
The Leafs are who we thought they were be: a pretty damn good hockey club. Even without the services of Nick Robertson and Joe Thornton, they can roll a bunch of interesting, talented forward lines at their opponents and gradually wear them down. The Flames should have their hands full with them once again.

If you peruse most standings projections, it becomes apparent that 65 points probably gets you into the playoffs. That’s a 32-23-1 record, or thereabouts, or a .580 points percentage.
The Flames have a 2-1-1 record, five points, and an .625 points percentage. They need 60 more points to punch their ticket to the post-season with 52 games remaining, which would translate to a .577 points percentage over the remaining games.

The Flames are without Dillon Dube. He’s considered day-to-day.
The Leafs are without Nick Robertson and Joe Thornton.

Toronto beat the Flames by a 3-2 score back on Sunday afternoon. Including tonight’s game, there are eight more meetings on the schedule between these two clubs.