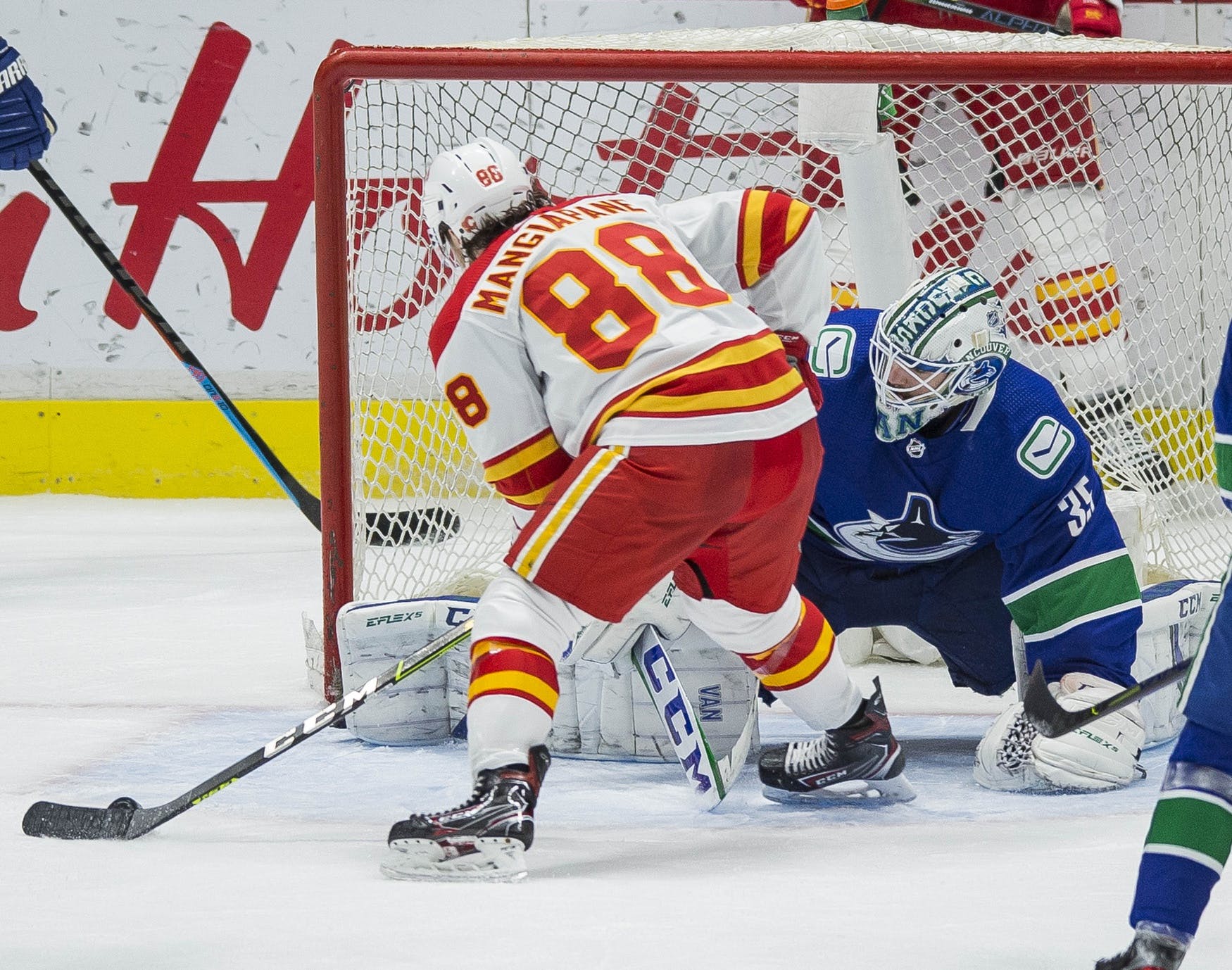 By Ryan Pike
1 year ago
There are three more periods, plus possibly overtime, left in the 2020-21 regular season. The Calgary Flames (25-27-3, 53 points) face the Vancouver Canucks (23-28-4, 50 points) in a regular season finale taking place several days after the playoffs have begun for the first time ever. It’s history in the making as these two clubs play out the string, in the latest regular season game in either team’s history.
The puck drops just after 1:30 p.m. MT and you can catch the action on Sportsnet West or on Sportsnet 960 The Fan.
For a view from the other side, visit the fine folks over at Canucks Army!

Projected lines, via Daily Faceoff:
Gaudreau – Lindholm – Tkachuk
Dube – Backlund – Mangaipane
Lucic – Ryan – Leivo
Nordstrom – Gawdin – Ritchie
Giordano – Tanev
Nesterov – Andersson
Valimaki – Stone
There’s no morning skate again, so we’re guessing. The starting goalie will be Jacob Markstrom, with Louis Domingue backing up. The active extras are Byron Froese, Buddy Robinson and Oliver Kylington. We’ll see which new faces get in tonight; Adam Ruzicka, Connor Mackey and Dominik Simon were brought up on emergency recalls yesterday, so we’ll see if they get in again. Matthew Phillips, Alexander Yelesin and Colton Poolman were added to the taxi squad yesterday from the AHL group, so either that’s a clue that they might get in today or it’s just a clerical thing.
It’s the 56th and final game of this accursed 2020-21 season. It’s featured frustrating play from the Flames at times, three different official coaches, and the Flames never quite kicking their game into full gear. Perhaps this game helps them get themselves to a better place in the fall, or perhaps it’s a precursor to significant changes in the off-season.

Projected lines, via Daily Faceoff:
Hoglander – Miller – Boeser
Pearson – Horvat – Highmore
Michaelis – Graovac – Hawryluk
Vesey – Boyd – Lockwood
Edler – Hamonic
Hughes – Schmidt
Rathbone – Myers
Braden Holtby starts for the Canucks, backed up by Thatcher Demko. Beyond that, who knows? Yesterday’s extras were Olli Juolevi, Jalen Chatfield and Zack MacEwen. Perhaps we see some of them rotate in.
The Canucks are completing their interminable season, which included everyone getting sick, and they should be commended for surviving. They weren’t especially good this season, and changes are surely afoot, but they were handed some pretty bad cards mid-season and did their level best to roll with it. With a few smart tweaks and a few players getting healthy, they could be a growing concern in 2021-22.

The Flames are 6-3-1 against Vancouver so far this season.