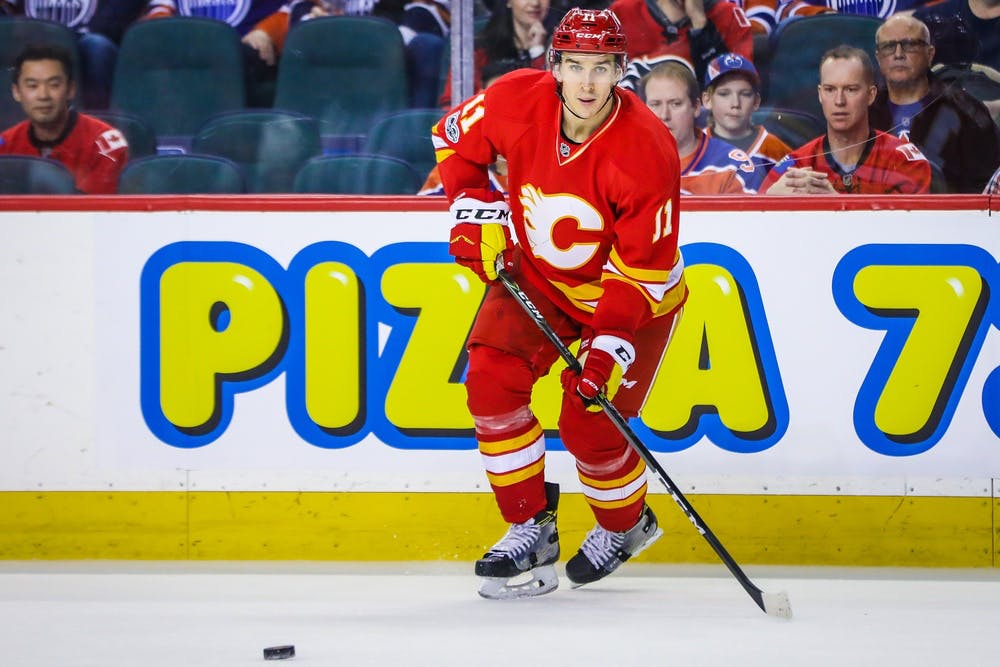 By Craig Petter
1 year ago
The Calgary Flames have routinely struggled to generate chances from the slot in their more tightly contested games this season, and last night’s victory against the Winnipeg Jets was honestly no exception.
The Flames haunted the perimeters with the puck for much of the game, notched the brunt of their shots (especially in the first two periods) from the blueline and the outskirts of the offensive zone. But unlike the nights where time confined to the edges of the offensive zone makes a team fizzle and flatline, this past match-up showcased how a largely repelled team can exploit their distance from the net for scoring opportunities.
Last night the Flames proved that a team pinned to the peripheries can still win so long as they pester their opponents, pick the right lanes and pack the crease with bodies. A healthy blend of pressure, traffic and luck—make no mistake: when Joakim Nordstrom logs a point, plenty of luck was definitely lurking somewhere in the building—launched the Flames ahead in the first and sealed their lead in the third. So, the goals that clinched them the win offer a persuasive template for teams to follow when the shots just aren’t coming from the sweet spots on the ice.

Firing from the fringes

The following graphics (courtesy of Natural Stat Trick) depict the evolution of the Flames’ shot attempt locations after every period. 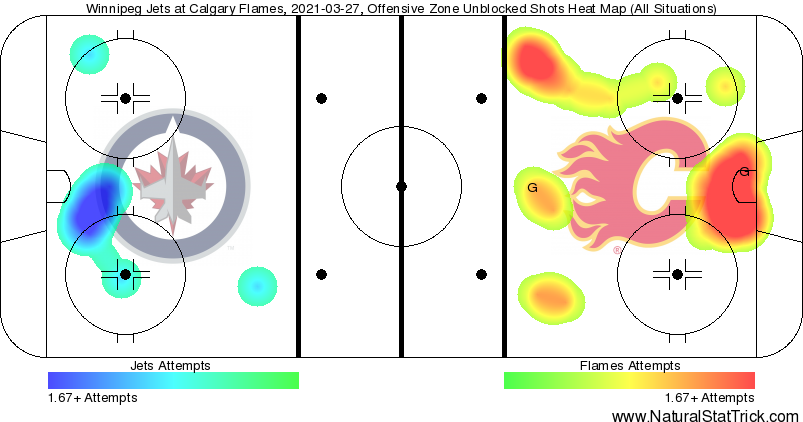 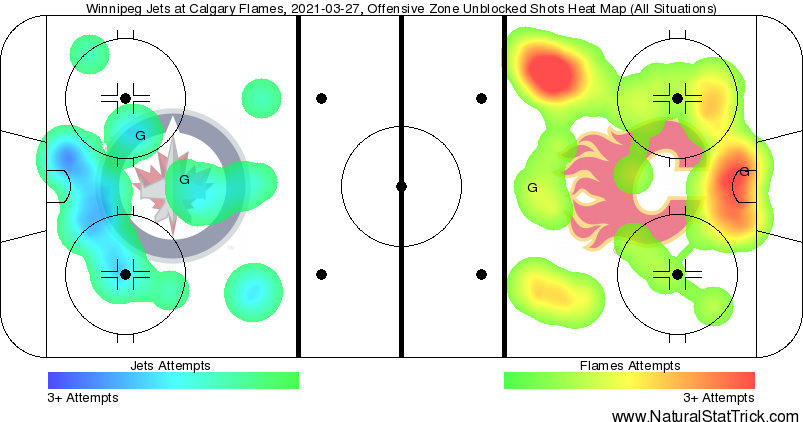 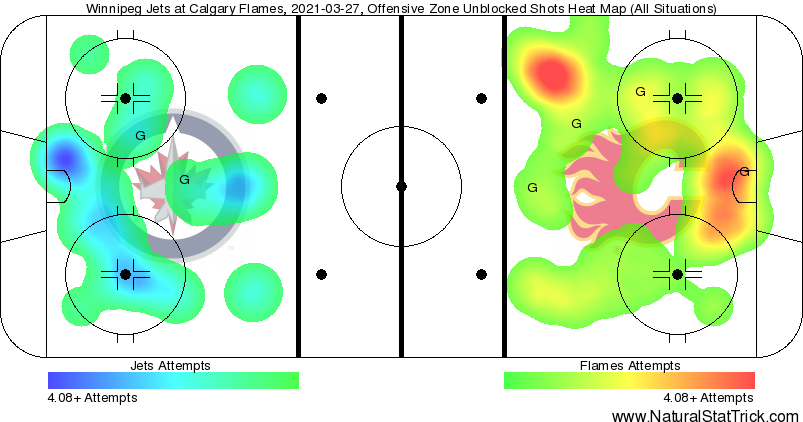 In the first period, the two hottest zones from which the Flames flung pucks were respectively the left blueline and the deep crease area. The relationship between the two spots reflects one type of chance the Flames mustered early in the game, where a defenceman—in one particularly memorable instance, Nikita Nesterov—beams a point shot and a loose puck attracts some rebound stabs. Independently, though, the abundance of blueline attempts demonstrate that forecheckers were feeding their defencemen for bombs (more often than not unleashed by Michael Stone, surprisingly enough) and the crease shots show that these same forecheckers were also funnelling pucks directly to the front of the net. In each case, offensive zone pressure and persistence granted them a shot from a play that began by the boards. A particularly potent shift of cycling and tight shots starring Mikael Backlund early in the first comes to mind—as does this play.
Meanwhile, though, the Flames also capitalized on the traffic planted in the shooting lanes while lobbing all those point shots. After all, what makes a shot dangerous isn’t always the position of the shooter but can also depend on the dangling sticks and stocky bodies in his way. And it was here the Flames thrived all night long.
First, Mark Giordano threads a slapshot close enough to the Jets forward to graze his stick but luckily far enough to miss his shinpads. He unloads this slapshot with an awareness of an opponent approaching, as well as Matthew Tkachuk and Sean Monahan parked in the general vicinity of the net (before they flee the fury about to fly off his stick, of course). So, though distanced from the net, Giordano selects a release primed for success thanks to the traffic lingering in front.
The third graphic above also emphasizes how the Flames played most of the game on the bubble of best scoring areas by showing where they potted their final two goals of the game. Beside Giordano’s point shot lie Andrew Mangiapane and Sam Bennett’s respective shots off the rush. As mentioned earlier, luck was present and palpable on these goals especially, but they prove the same principle of exploiting traffic as the best chance to score while fenced off from the slot. Mangiapane first ricochets his shot from outside the hashmarks off of the defenceman’s stick for a favourable redirection…
And Bennett’s goal even deflects off of Dylan DeMelo’s blade even before Laurent Brossoit swipes the puck into his own net like a vaudeville hook yanking a bad comedian offstage.
Eliminate the defensive sticks from the equation, and neither of those shots from such angles and distances ever beat a professional goaltender. But for a team that falls prey to playing in the perimeter of the offensive zone more often than not, the traffic provided by these sticks can win or lose a game. Alongside the admirable forechecking pressure in the corners that either snagged the puck from a battle or drew a penalty or kicked the rubber up the boards to the defencemen, this external factor amplified the Flames’ chances as they attacked from afar last night.
Though a team cannot rely on converting so many lucky deflections every night, the nature of the shot attempts and goals in this game then serves as a valuable lesson for any team limited to shots from low-percentage locations. In these cases, the puck pursuer proved more essential to success than the puck carrier since the latter failed to set himself up in positions to score. And so the main takeaway here is that if the Flames continue to fail to penetrate the slot, making like the Beatles on the fifth track of Revolver and hurling countless pucks from “Here, There and Everywhere” might be their most profitable possible offensive strategy. Thanks to relentless pressure and net-front havoc and traffic, it certainly worked for them last night.
Uncategorized
Recent articles from Craig Petter