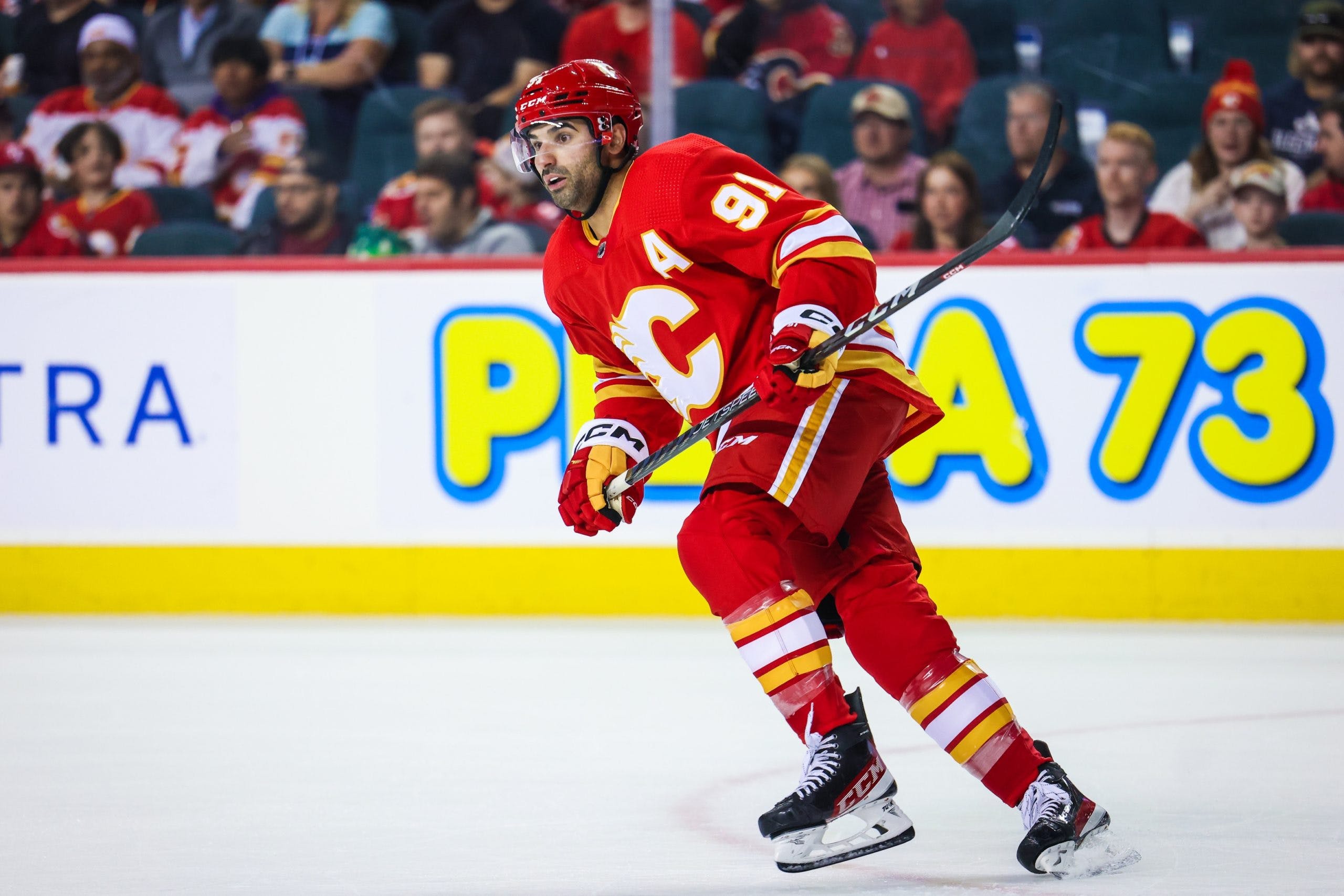 By Ryan Pike
3 months ago
After a transformative off-season that seemed to last forever, the Calgary Flames are playing a game that counts in the standings on Thursday at the Scotiabank Saddledome. And it’s a doozy of a first outing. The Flames host the defending Stanley Cup champion Colorado Avalanche, a team that played on Wednesday night in Denver, beat Chicago, and then flew to Calgary.
The new era for the Flames begins at 7:30 p.m. MT on Sportsnet One and Sportsnet 960 The Fan! (Pre-game coverage on 960 begins at 4 p.m. with Flames Talk, followed by the pre-game show at 6:30 p.m.!)

Projected lines courtesy Daily Faceoff:
Huberdeau – Lindholm – Toffoli
Dube – Kadri – Mangiapane
Coleman – Backlund – Lewis
Lucic – Rooney – Ritchie
Hanifin – Andersson
Weegar – Tanev
Zadorov – Stone
Jacob Markstrom is expected to start in net, backed up by Dan Vladar. Adam Ruzicka and Connor Mackey are the expected scratches. It’s the Flames debuts for Jonathan Huberdeau, Nazem Kadri, Kevin Rooney and MacKenzie Weegar, which may make this one of the more significant nights for important players debuting in club history.
This is going to be a very unique evening, as the Flames kick off their season at home against a team that played the night before. With a brand-new group of lines, keep an eye on which line and pairing gets the challenge of shutting down Nathan MacKinnon; usually that would fall to Mikael Backlund’s line, but the other two lines may be up for the challenge, as well. Could that deployment fall to Nazem Kadri, facing his old team for the first time since capturing the Cup back in June? Or does Darryl Sutter opt for a strength-against-strength approach and pit Selke Trophy runner-up Elias Lindholm against MacKinnon?
If you’re coming to the game, aim to be there early. It’s a slightly later start than on most weeknights (7:30 p.m. rather than 7 p.m.) but there’s a bunch of construction and road closures around the ‘Dome and parking may be at a premium. Build extra time into your routine just to be safe, and if you happen to not need it, spend the extra time getting snacks.

Projected lines courtesy Daily Faceoff:
Lehkonen – MacKinnon – Rantanen
Nichushkin – Newhook – Rodrigues
Cogliano – Compher – O’Connor
rotating – Sedlak – Meyers
Toews – Makar
Girard – Manson
Byram – Johnson
MacDermid
Pavel Francouz likely starts for the Avs after Alexandar Georgiev started against Chicago on Wednesday night. Wednesday’s scratch was Anton Blidh. (For cap reasons, the Avalanche are carrying 12 forwards and seven blueliners.)
So, Colorado’s really, really good. (I know, Ryan, great analysis.) They won the Stanley Cup, and rightfully so, after a regular season so dominant that Sutter infamously quipped that a series against the Avalanche would be “eight days wasted” for whoever played them. Case in point: the Edmonton Oilers, a good team that beat Los Angeles and Calgary in prior rounds, got beaten by Colorado in eight days (four games) in the conference final. The key to beating the Avalanche is playing a calm, structured game and taking advantage of their few miscues when they happen.
Oh, and avoid taking penalties. Chicago’s special teams performance might be a bad comparison because they’re not expected to be particularly good this season, but the Avalanche scored four power play goals against the Blackhawks on Wednesday night. It might be wise for the Flames to keep things at five-on-five as much as they can muster.

The Flames are without Oliver Kylington.
The Avalanche are without Jacob MacDonald, Darren Helm and Gabriel Landeskog.

These two clubs met three times last season, all in the month of March. The Flames won 4-3 in overtime, and lost 3-0 and 2-1. The games were all fast-paced and really close – the 3-0 game was tilted by an early third period goal and then a late empty-netter – and special teams were the big key, with Colorado’s PP out-scoring Calgary’s 4-2 over the three game set.
Dan Vladar started both of the road games in Denver, while Jacob Markstrom started the game in Calgary.